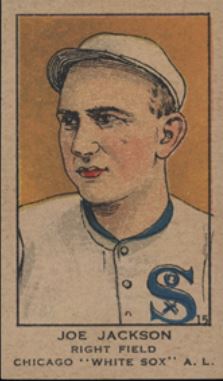 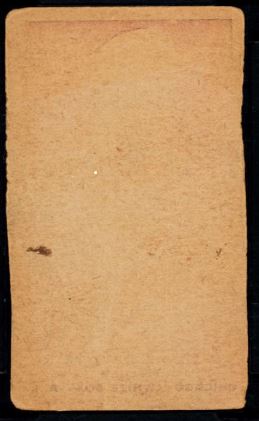 The W514 Shoeless Joe Jackson card is one of the highest valued cards in the hobby, thus it is no surprise that it often a common target for counterfeiters.  We've seen a lot of fake Jackson cards in five card uncut strips, although there are also real ones that came in strips of five.  Thus you need to be aware that not only has Jackson's card been reproduced, his card has been reproduced in a five card uncut version.  Here's a recent one that we came across:

The back of a fake uncut strip

Now here's the same exact uncut strip, but a REAL version.  To the naked eye it might be nearly impossible to tell the difference.  That's most certainly where a black light would be very helpful in identifying the fake.  The cardboard on the fake above just appears thick to me and not in line with a real version.

And the back.  On a lot of the strip cards, you can actually see a bleed through on the back from the text and images from the front of the card.  Remember, the stock on these cards is quite thin and thus it's only natural that the ink would bleed through to the back.  The fake above has a whiter and unnatural look that will become more familiar as you inspect more strip cards.

W514 Cards for Sale on eBay