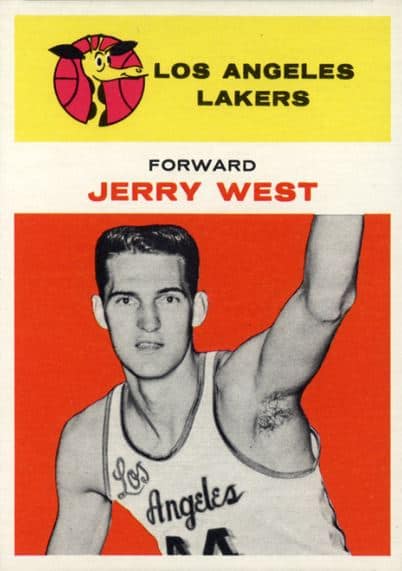 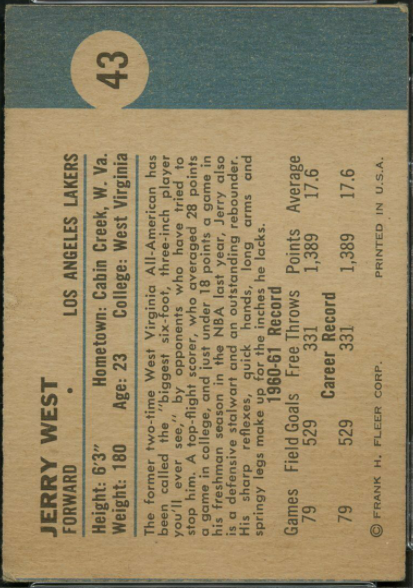 Search For 1961 Fleer Cards on eBay

The 1961 Fleer Basketball set marked the first official entry for Fleer into basketball cards, and it would represent the first major basketball issue since the 1957 Topps Set.  In addition, Fleer would not release another official basketball card set for another twenty-five years.

Cards were issued in 5 cent packs, with 24 packs to a box.  Each pack contained six cards with each box on average leading to two full complete sets.  If you thought the 1961 Fleer cards were attractive, what do you think about the wrappers?  Thing of beauty, am I right?  A silhouette drawing of a basketball player with a sharp red section outlining 'Pro Basketball' and the Fleer Logo.  Empty wrappers on their own are highly collectible. 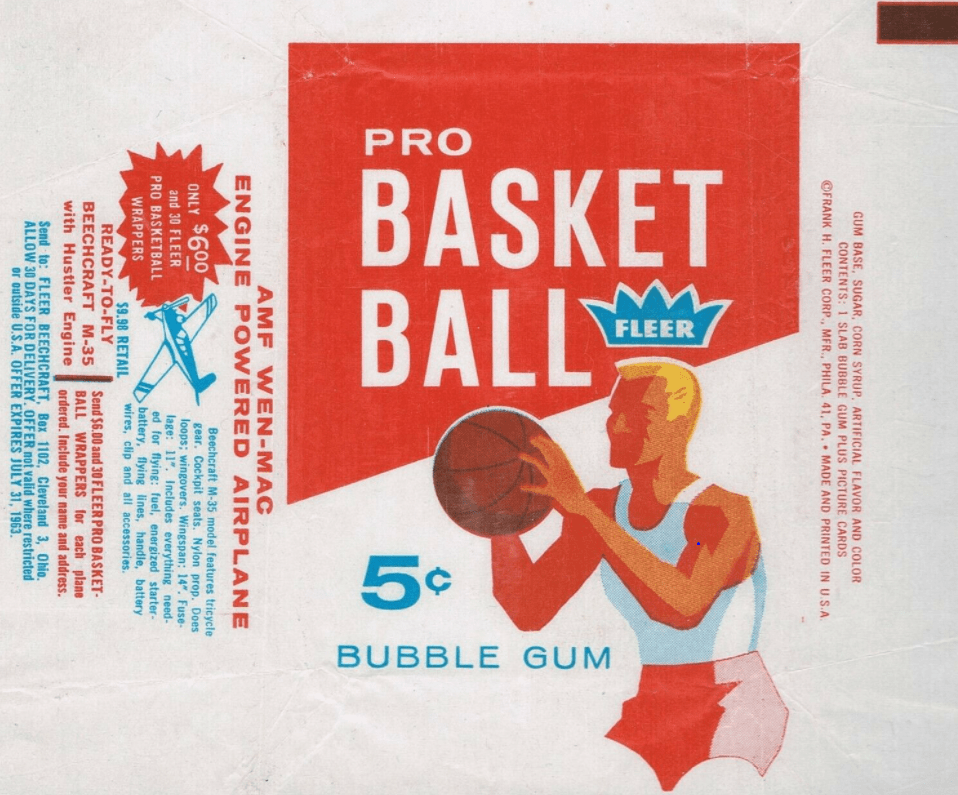 There are 66 cards in the set, 44 base player cards, and another 22 'In-Action' cards.  The In-Action cards have the name of a play below the player's name--an example shown below with the Jerry West 'Snags A Rebound' card.  The 'In-Action' cards are less costly than a player's regular base card, and can often be a cheaper way to own some of the key stars in the set. 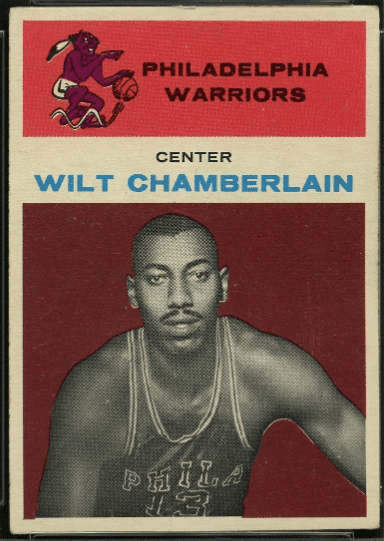 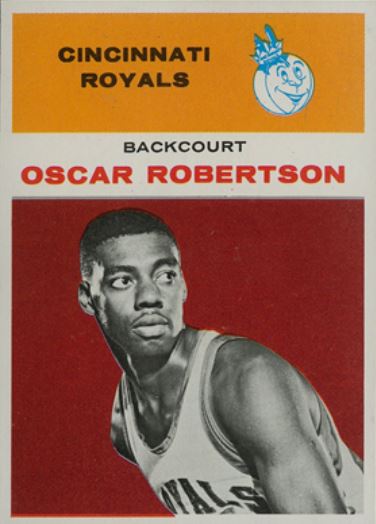 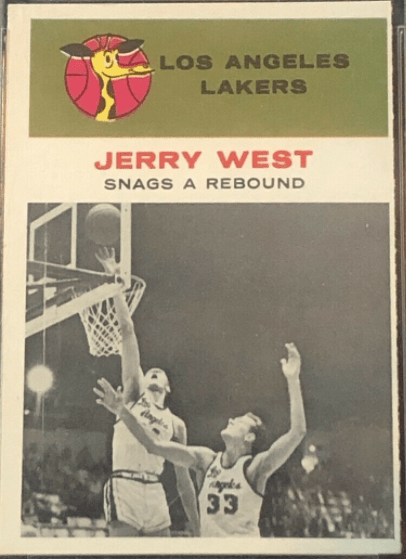 The backs of the 1961 Fleer cards feature the player name and bio supported by a paragraph discussing the player's career.  As we can see with this Jerry West card #43, Fleer noted West as a 'defensive stalwart and an outstanding rebounder'.  The card also features a stat line for the most recent year and their career stats. Note that sometimes the backs of the '61 Fleer can help distinguish whether a card is a counterfeit or not. 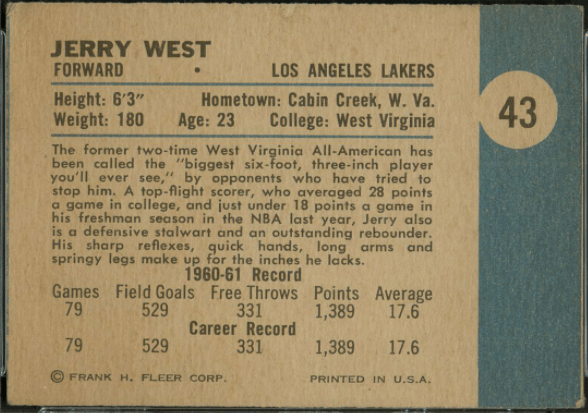 The set is notorious for poor centering, thus nicely centered cards certainly can earn a premium at resale.  Here's an Oscar Robertson rookie card that was graded an 8 (OC or off-center) by PSA.  This sort of centering is actually fairly common in the 61 Fleer set. 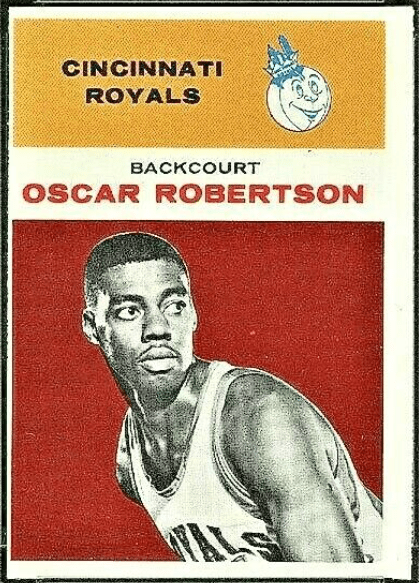 1961 Fleer basketball cards are commonly off-center such as this Oscar Robertson rookie card. 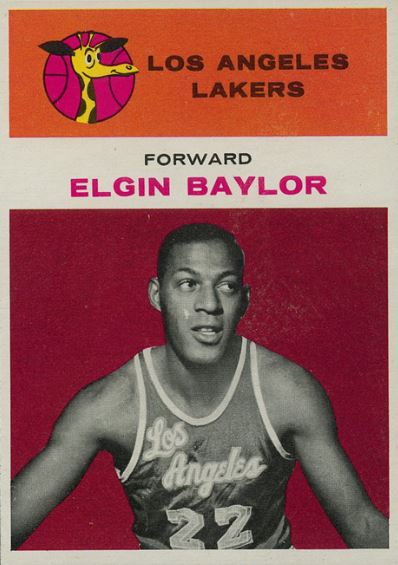 This is the first rookie card of basketball legend Elgin Baylor, sometimes overlooked in basketball circles, but still a very important player in the history of basketball.   Baylor was a prolific scorer, and led the Lakers to the NBA Finals eight times, was a 10-time All-NBA First Team selection, and played in 11 NBA All-Star Games.  His 61 Fleer rookie card is one of the most highly sought after in the set.   Note that Baylor also has a more affordable In-Action card (#46) in the set.

The true key and most valuable rookie card in the 1961 Fleer set.  The card shows Chamberlain as a member of the Philadelphia Warriors.  Note that Chamberlain also has an In-Action card in the set--#47.  After a few years with the Harlem Globetrotters, Wilt entered the NBA in 1959, soon became a scoring machine.  In his first year with the Warriors, he averaged nearly 38 points per game along with 27 rebounds per game.  His athletic abilities combined with his massive height and frame led to Chamberlain leaving a dominant mark on the game of basketball.   Over the course of his career, he was a 7x scoring champ, a 2x NBA Champion and and an 11x rebounding leader. 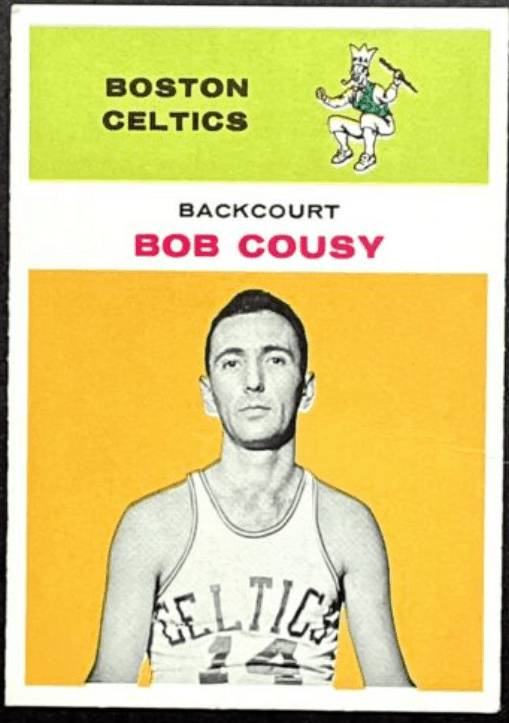 While not his rookie card--the 1957 Topps Cousy is often considered his rookie card, it still is a very in demand card for vintage collectors.  Cousy is well known for his dominance as one of the league's premier point guards for the Boston Celtics, winning six championships over his thirteen year stint.  The 'Couz' as he was also affectionally known, was also a successful broadcaster for the Celtics.   Note that Cousy also has a more affordable In-Action card (#49) in the set.

“The Big O” as he was called, Robertson was one of the best guards of all time.  He was inducted into the NBA hall of fame twice, the first as a player and later for his play during the Olympics and for his work with the National Basketball Players Association.  Robertson is the only player in history to average a triple double over the course of one season.  The 1961 Fleer card is considered to be his true rookie card, although he did have a card issued in the 1960 Kahn's Weiner's regional set.   Note that Robertson also has a more affordable In-Action card (#61) in the set. 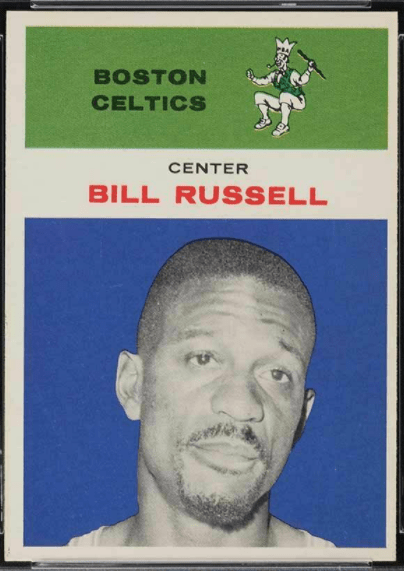 Although Russell's true rookie card is considered to be his 1957 Topps card, the 1961 Fleer card is still one of the more valuable cards in the set.  Note that Russell also has an In-Action card in the set (#62). Bill Russell is one of the best all time players in the history of the NBA.  Following in the footsteps of George Mikan, Russell dominated the league as a member of the Boston Celtics.  Over the course of his thirteen year playing career, Russell averaged nearly 15 points a game, with an astonishing 22.5 rebounds per game.  Russell even pulled down 51 rebounds in one game!

Jerry West aka ‘Mr Clutch’ was one of the best all around to play the game, having earned fourteen All-Star selections, along with being a member of the first five NBA All-Defensive teams.  Did you also know that Jerry West is the silhouette in the NBA’s logo?  His 1961 Fleer rookie card is a thing of beauty (have I told the 61 Fleers are my favorite set?) with its bright colors and old school Lakers logo.   Note that West also has a more affordable In-Action card (#66) in the set.