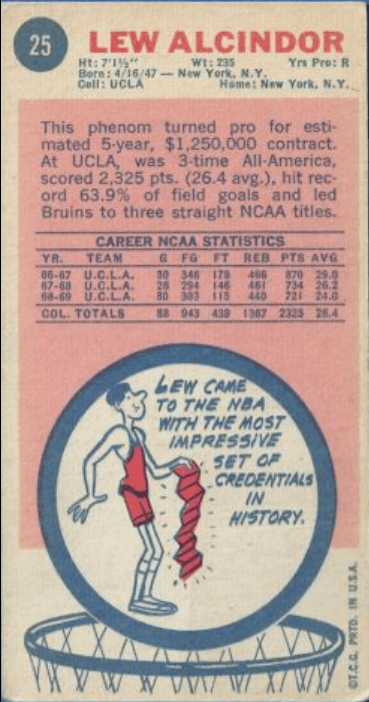 Cards were issued in 10 card packs and featured a new twist--in that the cards were oversized, length wise.  It is because of this, and for many oversized issues for Topps in later years, that the cards are often referred to as 'tall-boys' throughout the hobby.  Storage of the cards had always been an issue as the cards don't fit in the typical regular size top-loaders, although holders are now widely available.  This however does lead to condition issues across the set.

It should be noted that the Checklist card #99 is impossible to find in perfect condition--given the fact that many collectors marked off the checklist back in the day and that it was the last card on the corner of the printing sheet.

The cards definitely have a late 60's vibe--one might venture to call the cards 'groovy'?  A player photo is displayed within a circular color background, flanked by four cartoon basketball plays in each corner of the card.   The colored text for the player's name and team name make for a very interesting design.

The holy grail of the set is the rookie card of one Lew Alcindor, who of course would later on to become Kareem Abdul-Jabbar.  The card is not rare--it has been graded over 3000 times by PSA, but given the level of collector demand, the prices for higher grade Alcindor rookies has skyrocketed of late.

Topps also tried something a bit different by including insert 'ruler' cards of players in the set.  These 'ruler' cards feature a cartoon photo of the player standing next to a ruler marking their height.  They fold out to nearly ten inches lengthwise.  This is just more proof that people were obsessed with the height of players during this era. 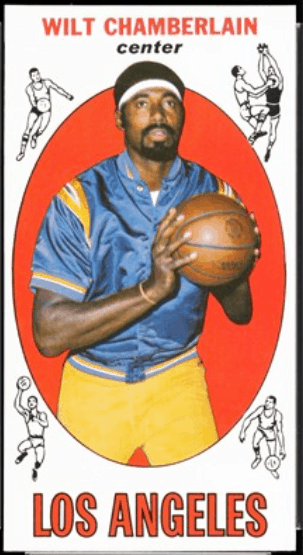 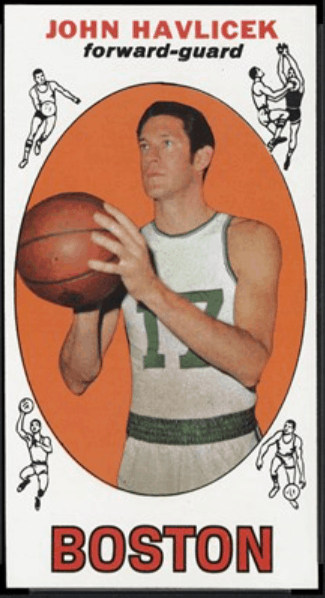 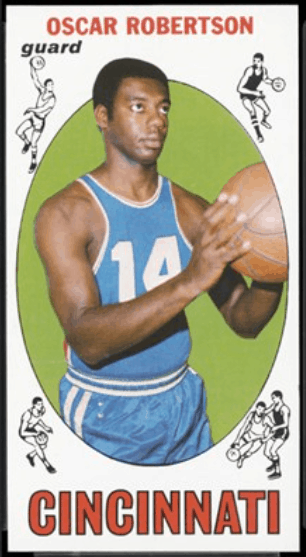 The backs of the cards feature more than the typical regular size cards, given that there is a bit more real estate to work with.  A player bio, summary and stat line are supported with a cartoon figure along with a fact (albeit sometimes ambiguous) about the player.  As we can see with the Alcindor rookie, we find that Lew 'came to the NBA with the most impressive set of credentials in history'.

Puzzle back of a 1968 Topps Test card

All in all the 1969 Topps Basketball set is an incredibly popular set that has grown in prominence over time, anchored by the Alcindor rookie card, along with a cavalcade of big name stars and other hall of fame rookie cards.

The 1969 Topps Chamberlain card captures Wilt during the tail end of his career, but even during the 1969 season he was posting over 27 points per game along with more than 18 rebounds per game.  Remember that 60's vibe I was talking about--well, nothing screams more 60's than the sweet headband and colorful starter jacket that Wilt is wearing on this card.  Priceless. 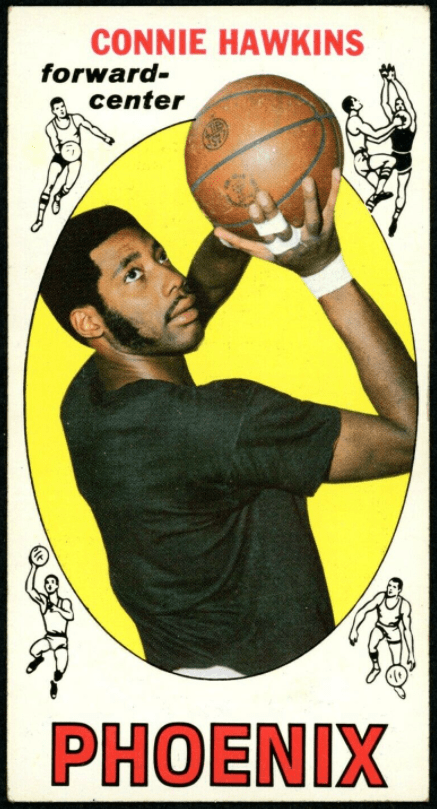 'The Hawk" had a short lived career, playing in the NBA for only seven seasons, but in that time he left quite an impression.  Hawkins had been accused in a point shaving scandal that had him barred from the NBA early in his career, thus missing out playing in the NBA during the prime of his career.   His rookie card is highly desired by vintage basketball collectors.

John Havlicek was a key member of the Boston Celtics teams that won eight championships during the 1960's and 1970's.  And amazingly, Havlicek's teams went an unrivaled 8-0 in the NBA Finals.  Havlicek was an All-Star in thirteen consecutive seasons from 1966 thru 1978.   Not only was he an offensive fire-power, he also was a tremendous defender, finishing as a first team NBA All-Defender for five seasons.  HIs 1969 Topps rookie card is probably a bit undervalued, as Havlicek tends to not get the same sort of name recognition as other players in the era.

I love this card.  The over-sized 1969 Topps cards are a bit annoying just because of storage purposes, but for history, this rookie card of Lew Alcindor (aka Kareem Abdul-Jabbar) is one of the most iconic and well known cards in the vintage basketball hobby.   There are plenty of these cards available (PSA has graded over 2200), but because of the awkward size and age of the cards, finding mint versions is a big challenge.

A great all-around basketball player, Bradley won two championships with the New York Knicks and also gained popularity as a three term Senator from New Jersey.  His rookie card is one of the more valuable cards in the 1969 Topps set.

Robertson (aka 'The Big O" was a twelve time NBA all-star and is featured here as a member of the Cincinnati Royals.  Robertson is still the only NBA player in history that sits in the top ten in points per game and assists per game.

The rookie card for Elvin Hayes.  In each of his first four seasons, Hayes averaged more than 25 points per game and over 14 rebounds.  Hayes was a twelve time all star; he eventually would go onto play with the Bullets where he would play with Wes Unseld to win a Championship in 1978.

The rookie card for Earl 'The Pearl" Monroe; Monroe first dazzled with the Baltimore Bullets and ultimately went to play for the New York Knicks.  With the Knicks, Monroe and Walt Frazier were a legendary backcourt which ultimately would win the NBA title in 1973. 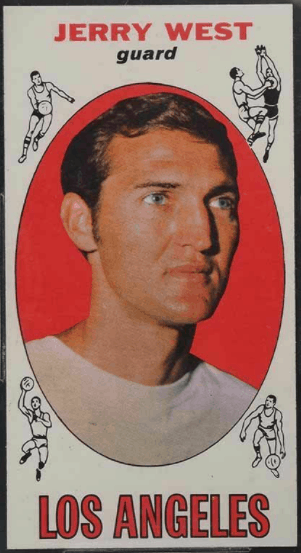 Although West's 1969 Topps card caught West near the latter half of his career, at the time, West was still averaging above 30 points per game and cementing his legacy as one of the best to ever play the game. Walt Frazier was the larger than life backcourt leader for the New York Knicks from 1967 to 1977, winning two NBA Championships and seven consecutive All-Star berths from 1970 to 1976.  The Frazier RC is one of the more valuable rookie cards in the set.