Ever since we published our interview with Star cards expert Steve Taft, we’ve had an increasing number of inquiries on Star basketball cards.

And the focus of the questions we receive typically are regarding the 1984 Michael Jordan Star XRC (or extended rookie card) #101.

Jordan’s 1986 Fleer rookie card has become the essential card to own for nearly all vintage basketball collectors, yet Jordan’s Star XRC card still remains a bit of an afterthought in comparison.

In this piece, we examine the 1984 Star Jordan #101 XRC a bit closer and more importantly help collectors determine how to identify a fake copy.

The Color Of The Card Must Be Red

This might be stating the obvious, but I just need to start from the beginning.  The Michael Jordan Star XRC #101 card is red.  There have been no copies that have been produced in a different color.  There are white and black reprints that often circulate on eBay.  These are 100% fakes. 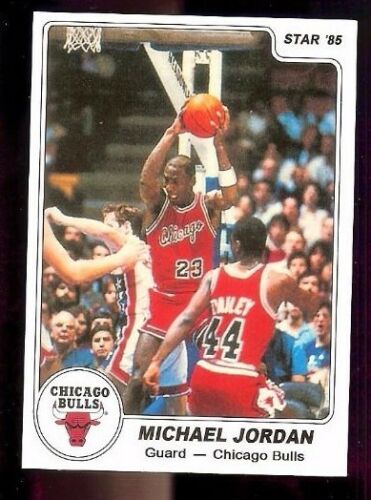 A reprint XRC Jordan with a white border.

Another quick clarification to get out of the way.  There were several Topps reproductions of the Jordan Star XRC issued in 1996.  Below is a Topps version of the card (note there is also a Stadium Club Finest reproduction of the card). 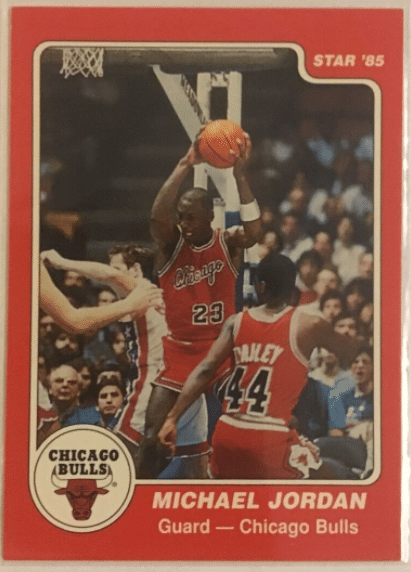 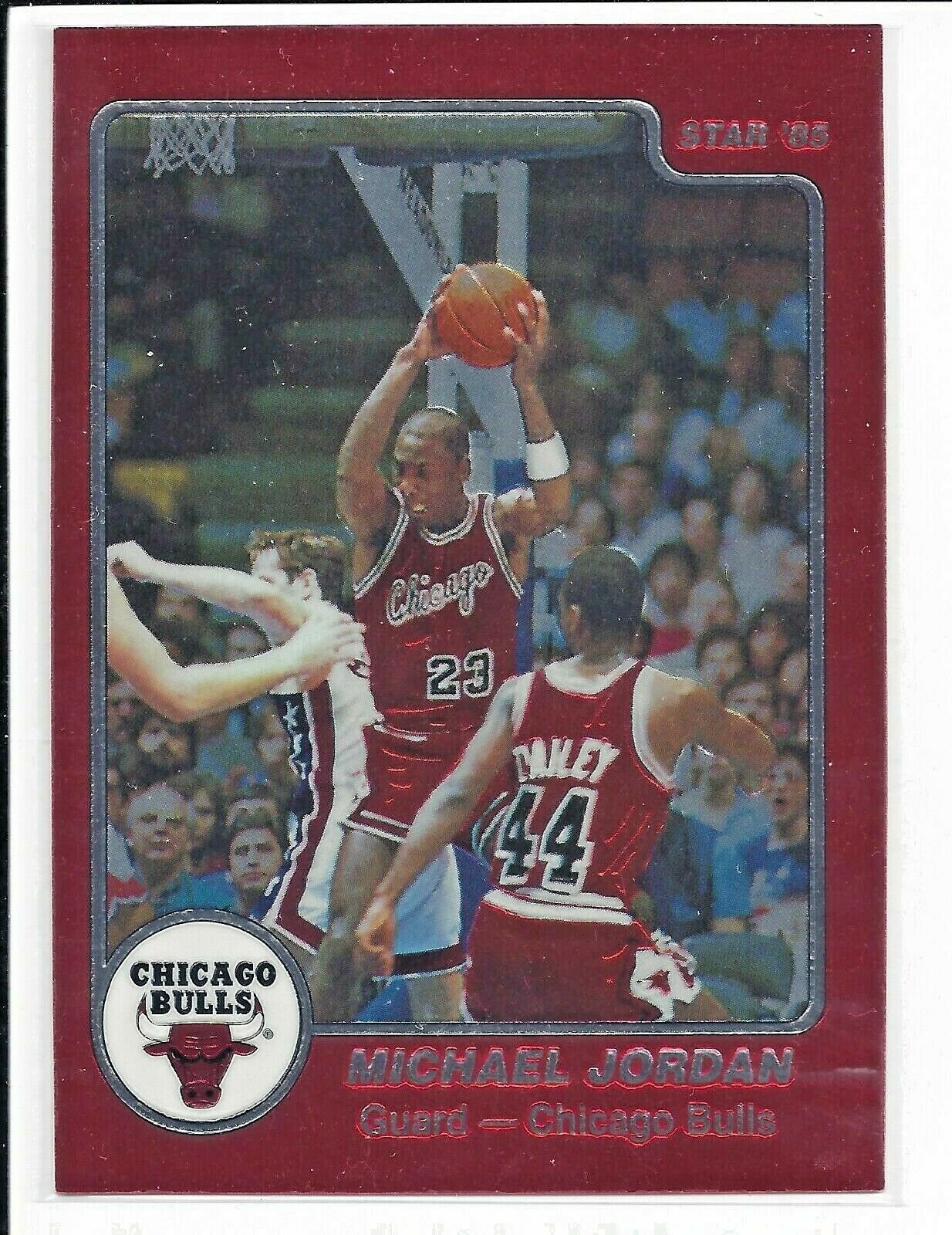 Here is the back of the Topps reproduction, which is where you can easily figure out that the card is not the real deal.   See the 'Reprinted By The Topps Company..." text near the bottom of the card. 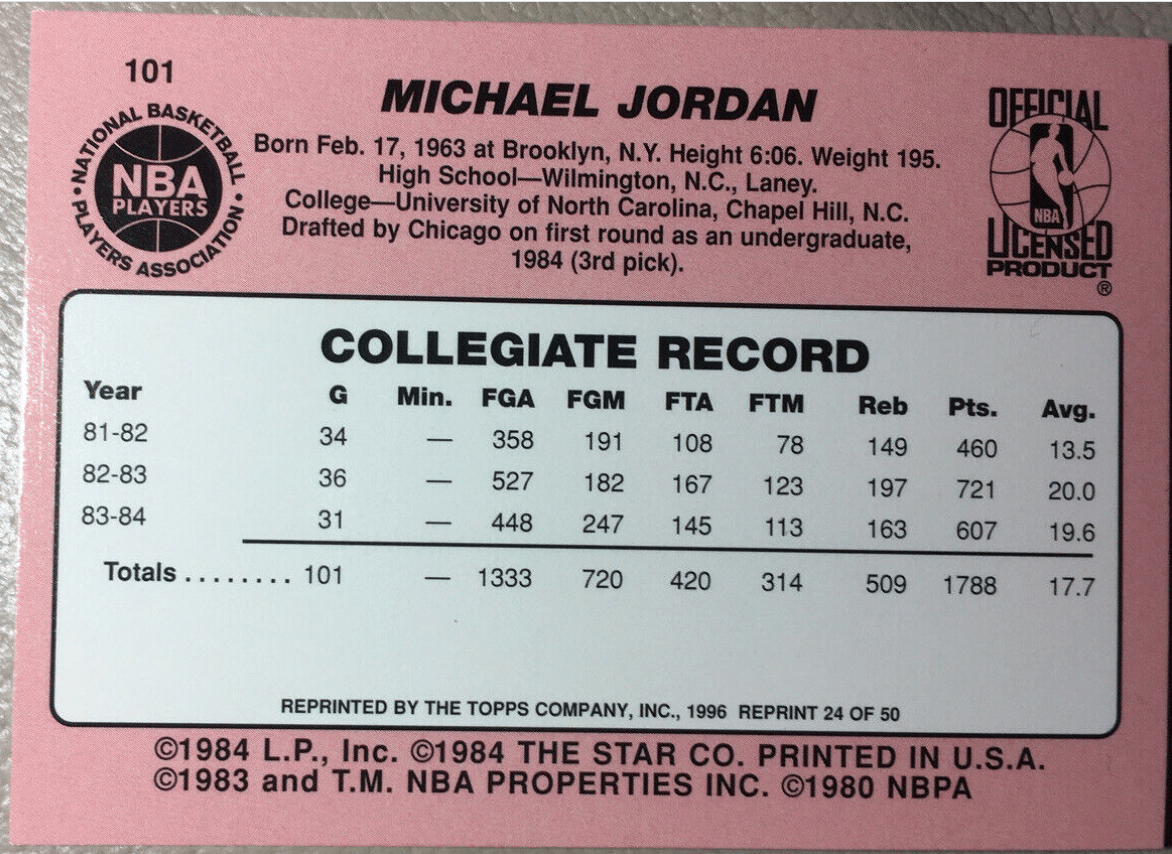 Here's the back of a Stadium Club reproduction---note this one has slightly different text--it says 'Original Reproduction - The Topps Company".  Still cool cards and they have some value, but just not a real Star XRC card. 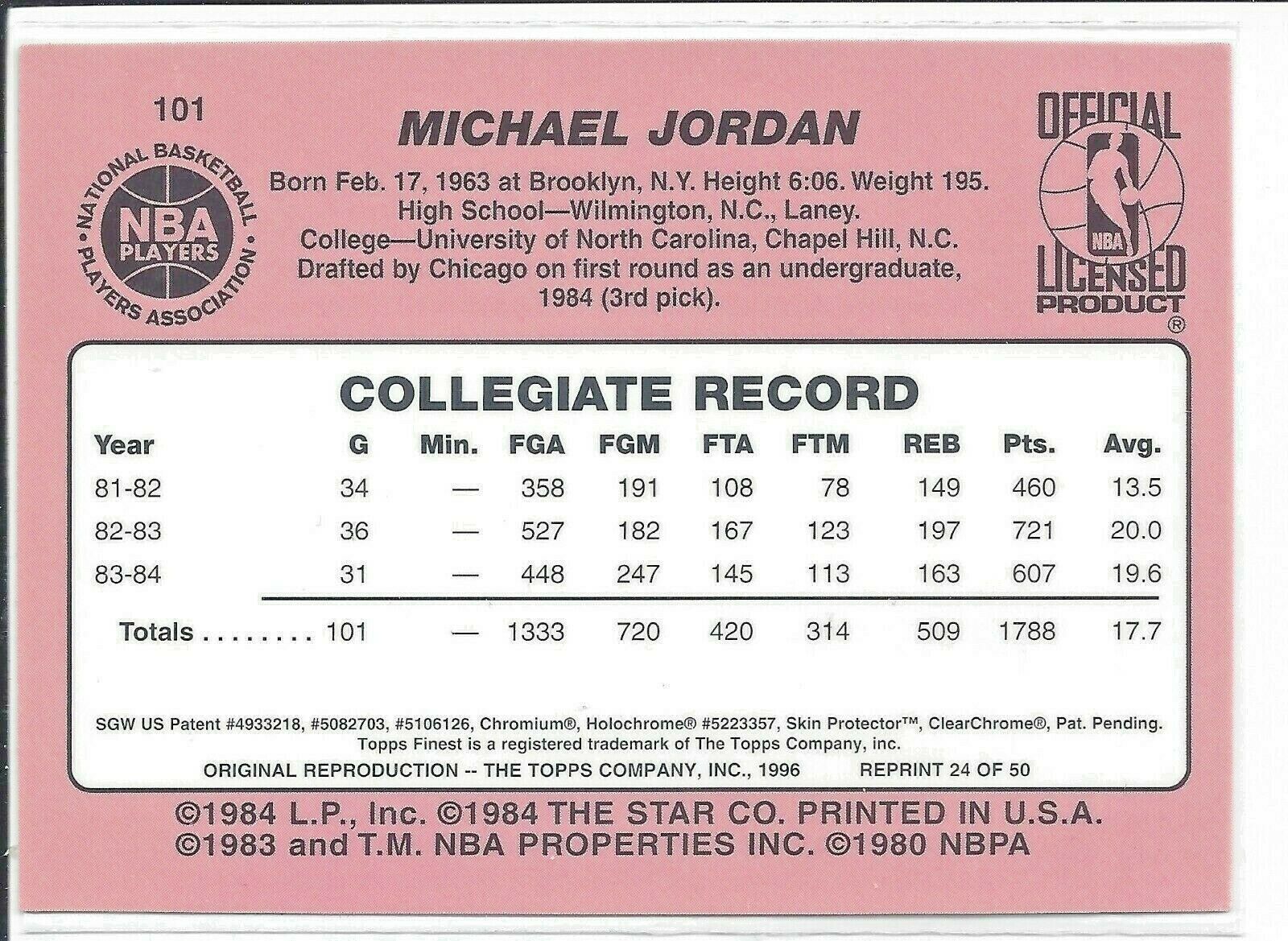 Note here is a view of an authentic Jordan XRC card.  There are multiple differences between the two reproduction cards, some of which include the colors, boldness of fonts.  Can you spot any differences?

The good news for collectors is that with a little bit of education, you should be able to easily tell the known fake XRC Jordan rookie cards from the real thing. Thankfully, to date, there hasn't been a great fake, but of course, I suspect the counterfeiters have something up their sleeve.

Here's a fake Star XRC Jordan I came across recently. 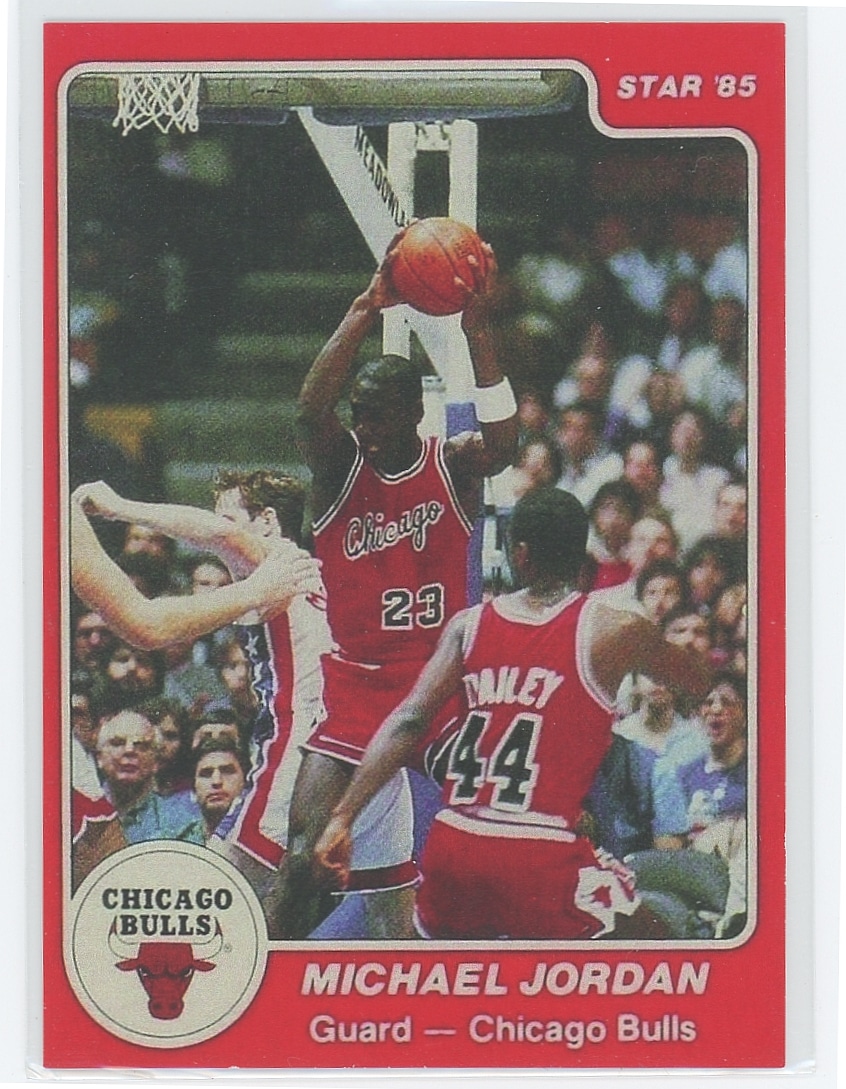 And for comparison sake, here's a real copy:

What sticks out to you?

Hopefully you can notice that the fake clarity is quite bad, almost looks like a photocopy and this is most noticeable with the text of the card, in the top right with 'Star '85' and with Jordan's name and team name. 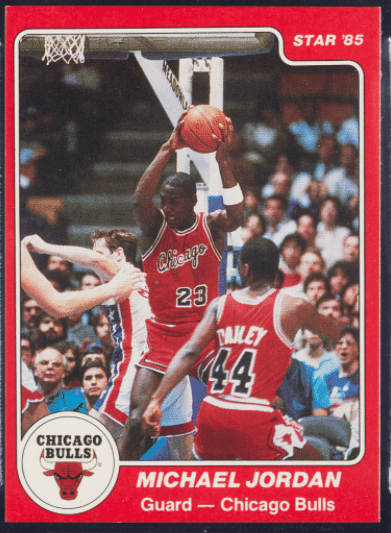 Here's what the text on the fake looks like zoomed in: 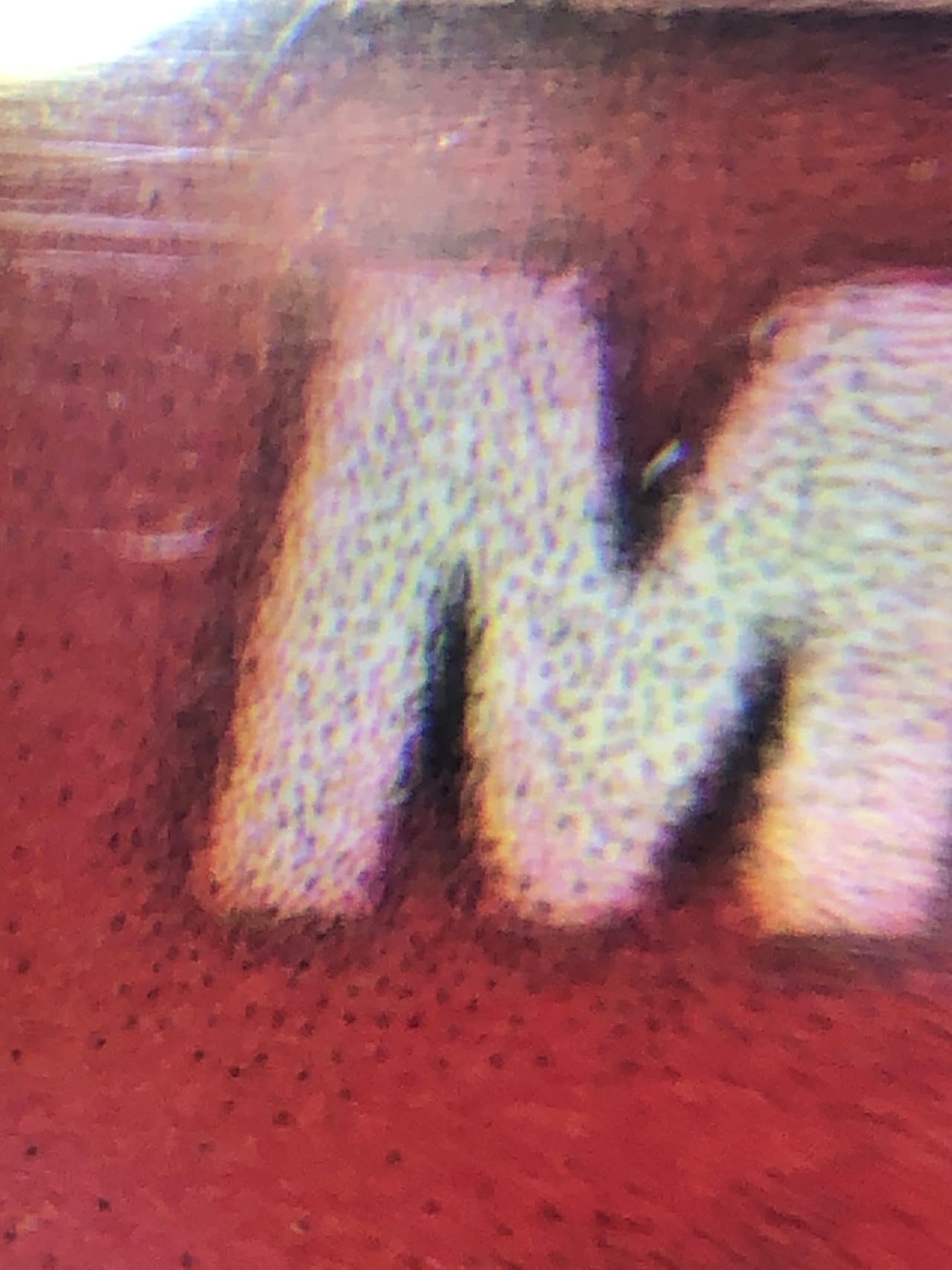 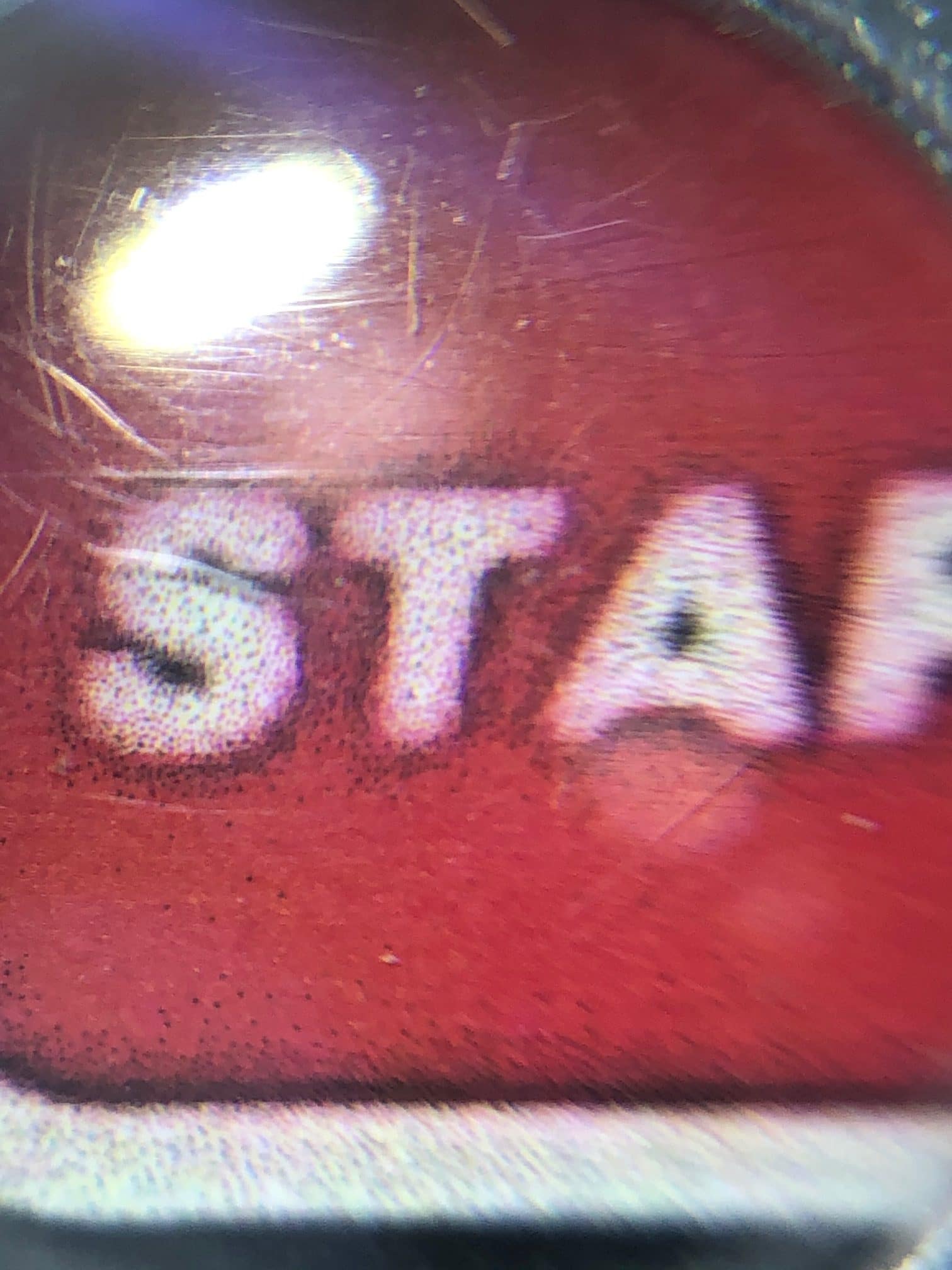 You can see the blotchiness, mostly due to the low quality print of this forgery.  The lines around the lettering should be solid, as should the black borders on the card

Trust me on this, do yourself a favor right now and get yourself a loupe.  You can get a simple jewler's loupe for $5  or grab one that attaches to your phone so you can take pictures, like this one here.

Here's the back of the fake card: 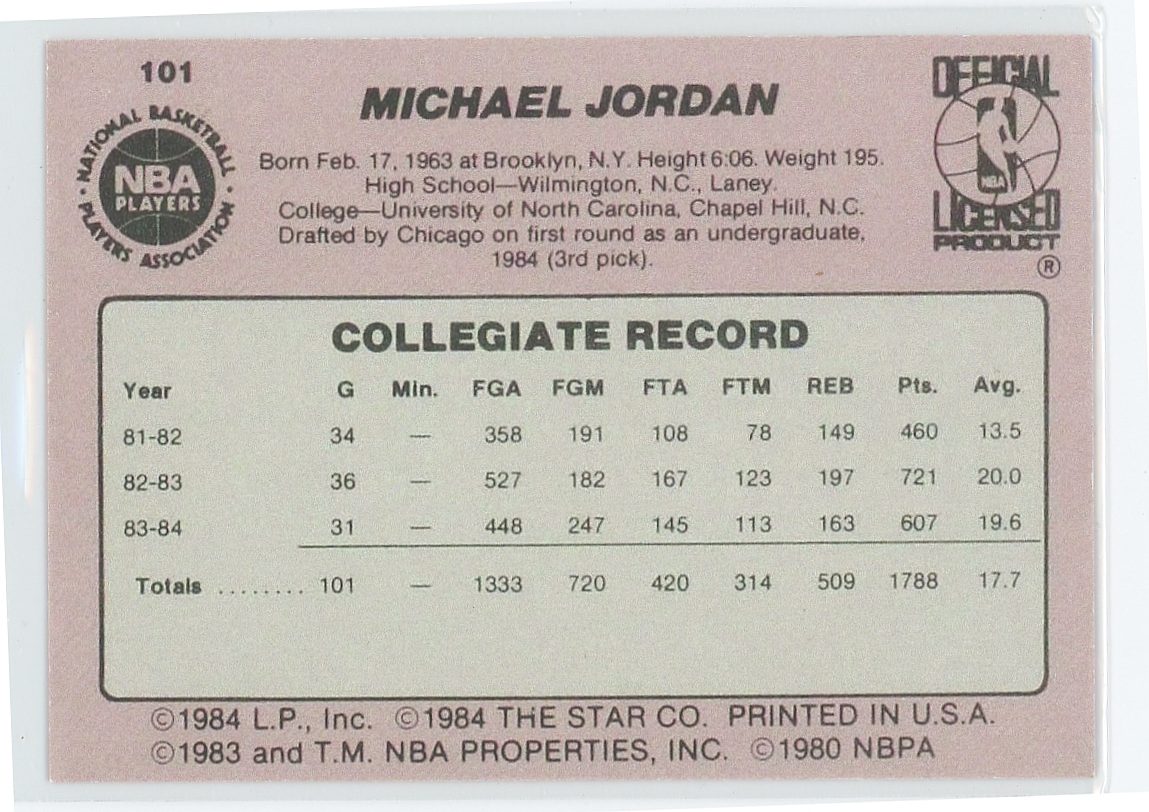 The back of a fake XRC Star Jordan

And again, here's a look at the back of an authentic XRC Star Jordan.  Note the crispness of the text on the real card versus the fake above.

Here's another back that is a clear fake.  I've circled three spots which are easy identifiers.  Note, as shown above, these simple steps are not on all of the fakes, so a loupe to check for clarity is still a given. 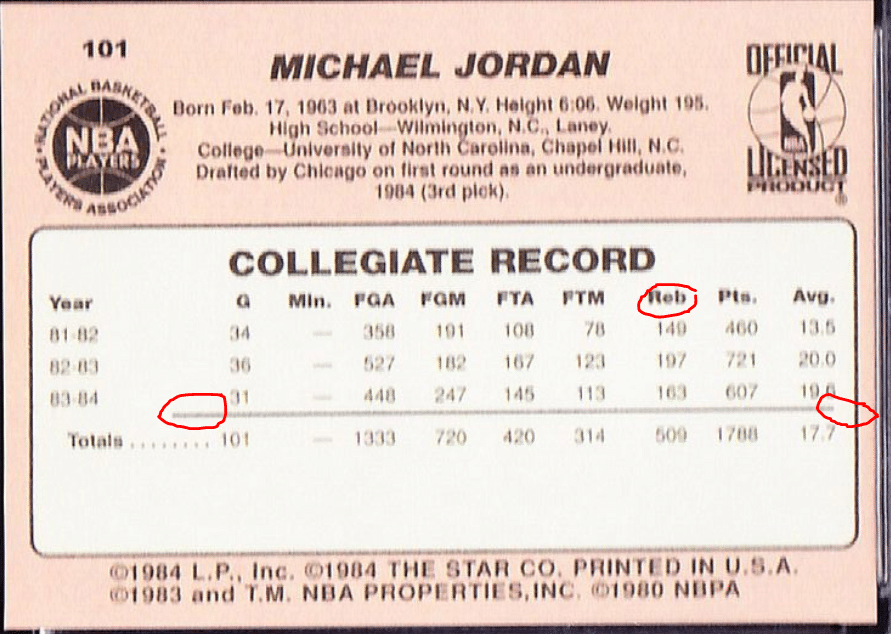 A common fake XRC Jordan back.

First, note the 'Reb' header in the stat line.  This should be in all-caps like all of the other headers.

Second, see the line that stretches out across the dots on the left?  That line is way too long.   Again, here is the authentic back---see how the line only goes over the first dot below it?

Lastly that line on the right side of the card, above the stat totals.  It's way too short, as it should be nearly touching the side of the borders.  Again, here's the real card for comparison sake: 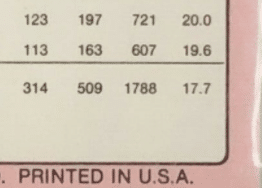 Here's another fake a unsuspecting eBay buyer just sent to me.  We can see in comparison to the real card that the front color is a slightly different red, and the clarity on the Jordan photo is very fuzzy.  In addition, you can sort of see how the text is fuzzier on the fake card.

One other thing I'd point out--the centering on the fake card is a bit unusual---on nearly all off-center Jordan XRC cards I've come across, there is a wider edge on the right hand side of the card. 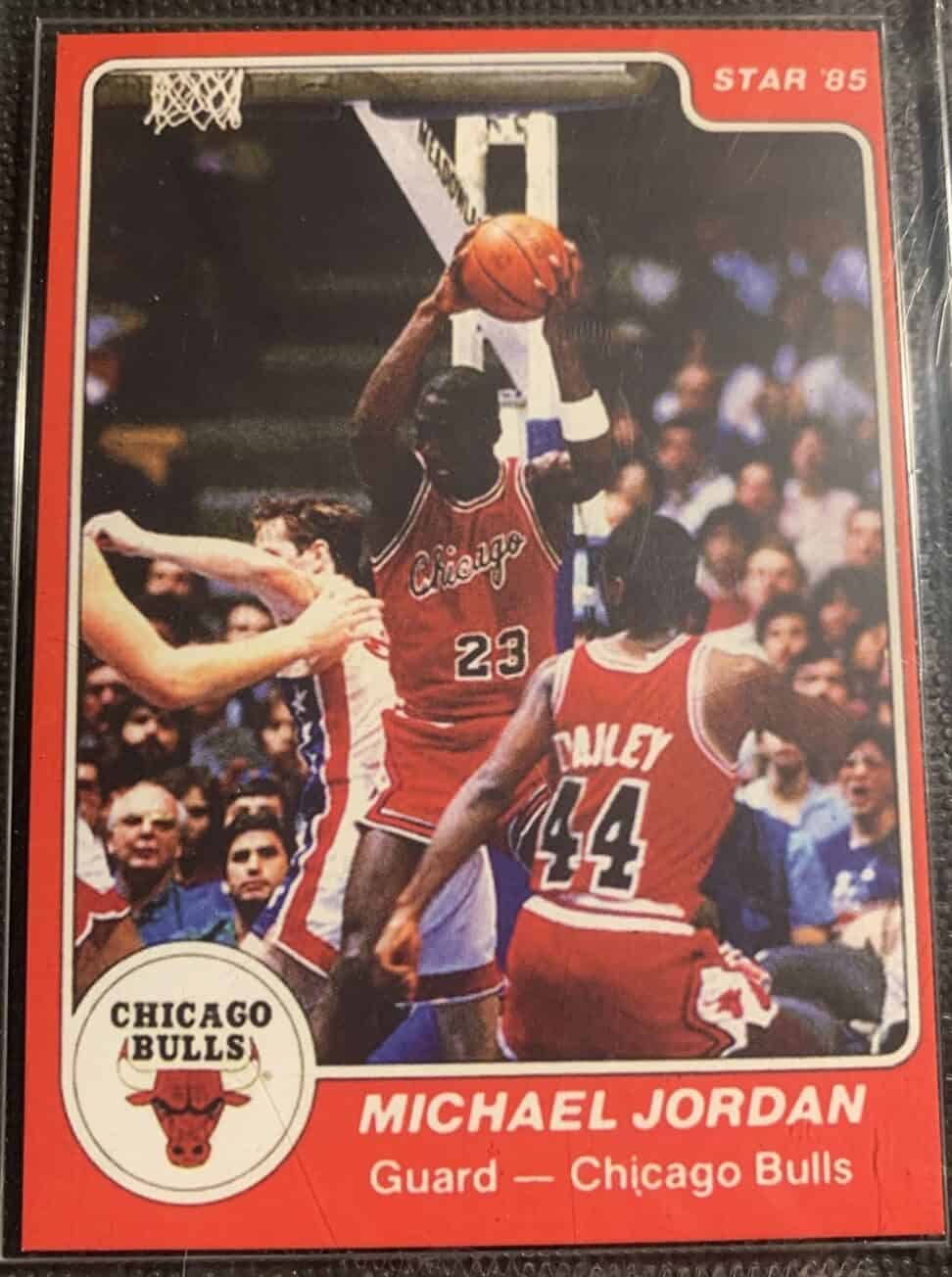 You can see in a comparison of the back on the two cards, that the fake card has a darker pink background in comparison to the real card. 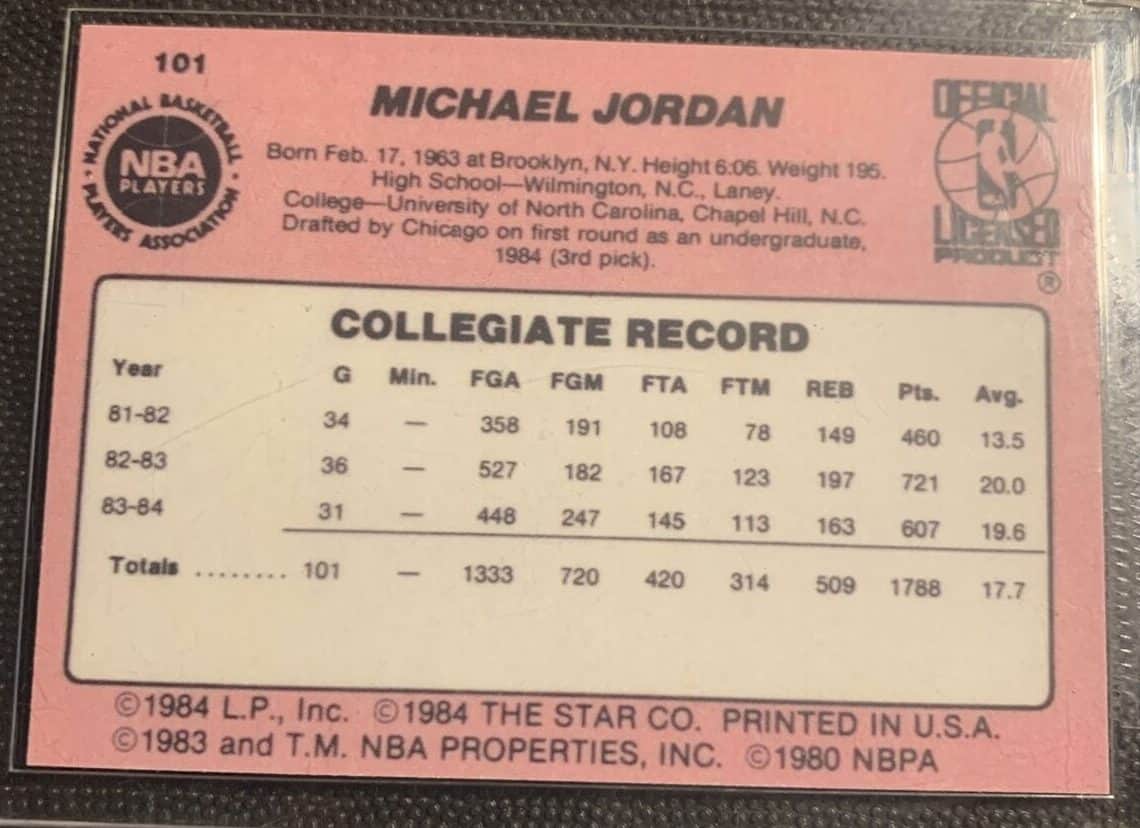 Back of a fake XRC Jordan

Hopefully, this guide helps in your efforts to determine a fake Jordan Star XRC.  As mentioned, the existing fakes aren't great (like some of the Jordan Fleer rookies I've seen), although it wouldn't surprise me to see some improved versions in the not too distant future.

I still like the Star Jordan XRC for it's investment potential.  The card has a significantly lower population than the Jordan Fleer rookie, and the prices are fairly equivalent.

If you need help authenticating a Jordan XRC card or come across a good fake, let me know at chris@allvintagecards.com