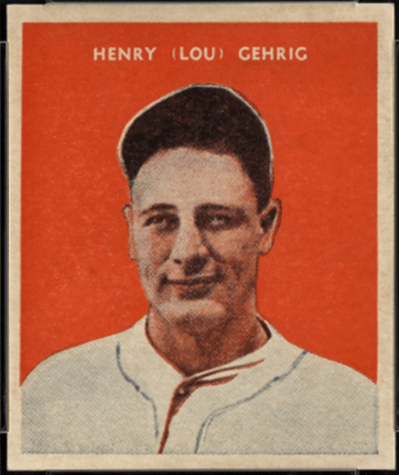 Lou Gehrig As A Player

Lou Gehrig was one of those larger than life figures, someone who was considered bigger than the game in certain respects.  His work ethic and dedication to the game arguably only rank behind Cal Ripken Jr, but his beautiful, yet heartbreaking, Farewell Speech he gave on July 4 1939 left an indelible mark on baseball’s history.

The fact that he’s just as well known for being named after the debilitating disease that killed him as he is for his many accomplishments in the major leagues is both tragic and unforgettable.

Over the course of his career, Gehrig amassed 2721 hits, 493 Home Runs and proved himself to be one of the most dominant hitters of the era.  Gehrig had held a long standing record of playing in an amazing 2130 consecutive games.  He will forever be remembered as one of the best to play the game.

"His greatest record doesn't show in the book. It was the absolute reliability of Henry Louis Gehrig. He could be counted upon. He was there every day at the ballpark bending his back and ready to break his neck to win for his side. He was there day after day and year after year. He never sulked or whined or went into a pot or a huff. He was the answer to a manager's dream."

A Closer Look At The U.S Caramel Gehrig Card

This is Lou Gehrig’s first card, which ultimately makes it his rookie card, even though he wasn’t a rookie in 1932.  An interesting feature of this card is that it’s the only one of his that uses his actual name, Henry “Lou” Gehrig.

Its ascetic appeal may not catch the eyes of on lookers as quickly as the 1933 & 1934 Goudey cards, or even the 1933 DeLong card, for that matter.  Its appeal is subtler due to it lacking the vivid and bubbly colors seen in the other cards.

However, it’s a clear and pleasing portrait photograph with a pleasant red background that helps capture that palpable friendliness of Gehrig’s face better than any of his other cards.

In 1932, the year the US Caramel set was issued, Henry “Lou” Gehrig racked up 34 HRs, four of which came in a single game; 151 RBIS; and a .341 batting average, before capping the year off with a World Series victory over the Chicago Cubs.

The back of Gehrig's US Caramel card features a biography for Gehrig and notes that the card is 1 in a series of 32 for the US Caramel Set, which also featured Babe Ruth and Ty Cobb. 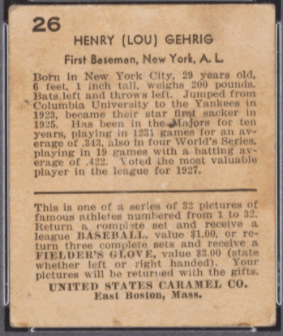 How Rare Is Gehrig's US Caramel Card?

Another important factor to consider with this card is the scarcity of the set in general. The 1932 U.S Caramel cards could be sent in to the manufacturer for sports equipment, where they would punch holes in the cards before sending it back with the equipment to the kids.

This is one of the core contributing factors to its limited supply. The total PSA population for this card is only 93. There are no PSA 9’s of this card; there are few high quality representations today, with the best being four PSA 8s (NM MT) and four PSA 7s (NM).

As shown above, Gehrig's US Caramel card is much rarer than any of his other major issues, especially all four Goudey cards.  Just a look at the population and you can realize why I get excited about this US Caramel card as an investment.

Looking To Sell A 1932 US Caramel Gehrig Card?

How Much Is Gehrig's US Caramel Card Worth?

The last sale for a PSA graded US Caramel Gehrig was in February 2021, when a PSA 5 sold for $12,400.  In addition, in January, a PSA 6 sold for nearly $23K, thus, we can say with certainty that anything with a higher mid range grade is worth a minimum of $10K. 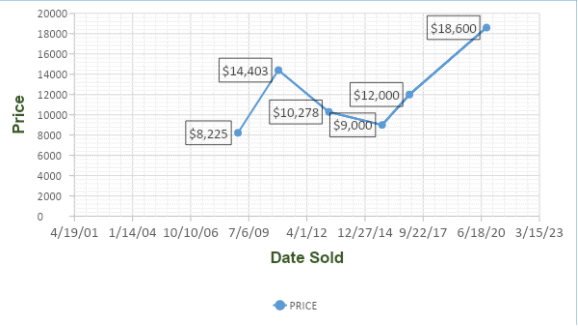 Price History for a PSA 7 US Caramel Lou Gehrig card.

If you want to get your hands on a lower end version of the card, it is possible, but it will still be quite costly.  The most recent results from PSA show that even a PSA 4.5 sold for nearly $10K at the end of 2020. 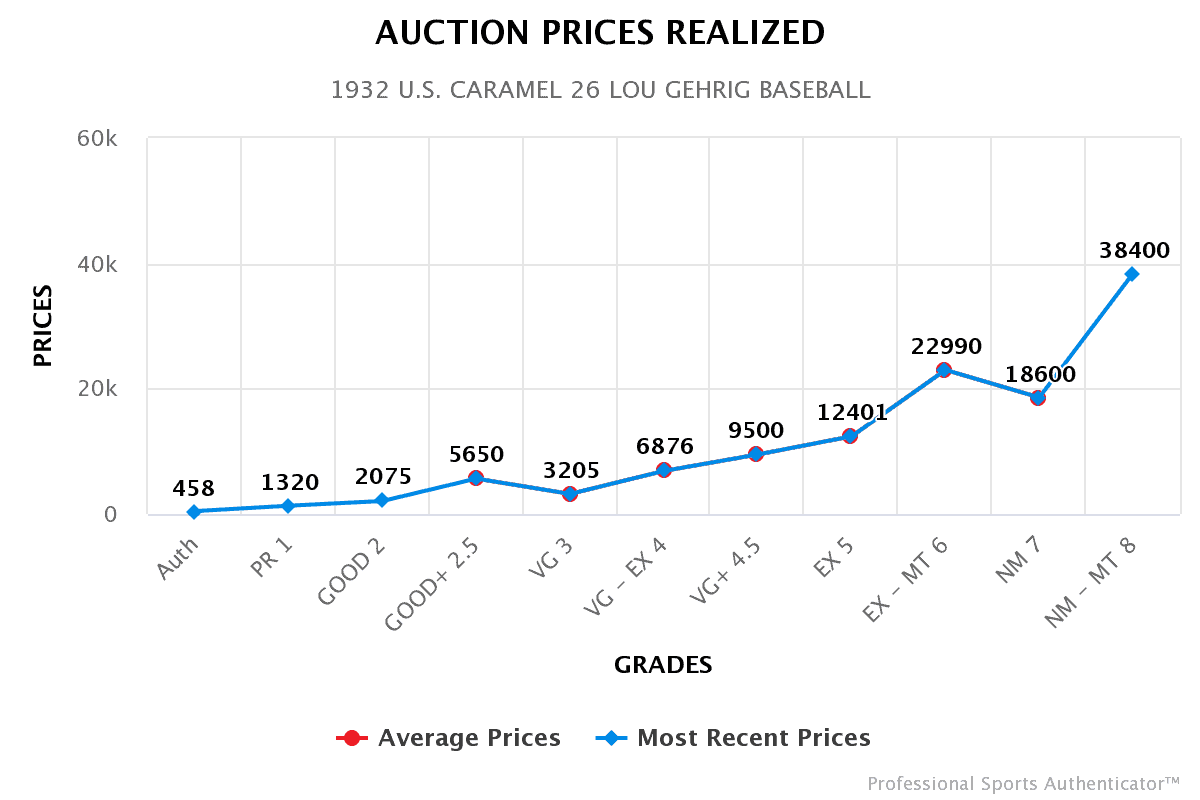 There haven't been a lot of lower graded sales of late-- a PSA 2.5 sold at auction for $5700 in October 2020, but I would expect that number to be quite higher at the moment.  A PSA 2 (or Good Condition) card will likely be valued at close to $5000 or more in this market.  A Poor condition card would probably be the best chance at scoring a copy of the card for less than $5000.

Given the relative scarcity of the card, I still consider lower grade copies to be worthy of a look as a long term investment for vintage collectors.

It's clear that based on the scarcity of the card, especially relative to his Goudey issues, that the card certainly appears undervalued.