In what was only inevitable, both SGC and PSA, two of the hobby’s largest third-party grading companies have hiked prices.

In a recent letter to customers from PSA President Steve Sloan, PSA provided a new pricing structure, hiking the ‘Regular’ service card submission from $50 to $100, while at the same time raising the declared value to $499 (from $199) on Collector’s Club ‘Value’ submissions.  They also hiked the ‘Value’ rate to a minimum of $20 per card.

Note that this pretty much means if you are thinking of making any volume submissions to PSA, it is a mere necessity to have a ‘Collector’s Club’ Membership –which is only $99/Year at the Silver level.

PSA also raised the ‘Express’ grading service level to $150 (from $75), the ‘Super Express’ level to $300 (from $200), with ‘Walk Through’ service jumping to $600, from $500.  Note this will make anyone sending in a card for a one-time submission to ensure that they are going to benefit from paying such a high sum to get their card graded.

Along with price increases, PSA announced new ‘Complete Through Dates’ (or CTD).  From their own words:

On PSA’s new Customer Communication Center you can see continually updated Complete Through Dates.   Note these are the dates as of this writing (March 7th) and are subject to change. 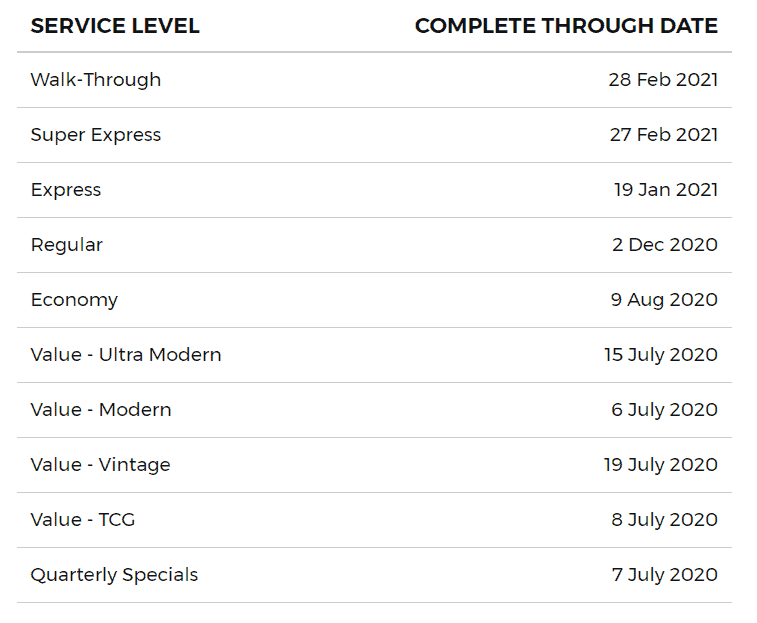 Note that these CTD's only represent when PSA has entered your cards into the system.  You can utilize these CTD's to compare your order to see where you are in relation to their oldest submitted orders.  There is still going to be a fairly lengthy wait to receive your cards on any Regular submission and especially any Value based bulk submissions.

As for SGC, they also recently informed the public of some important changes.

SGC, like PSA and Beckett alike has been overwhelmed with grading submissions.

And they at times were running up to a 16 week backlog, but based on their latest communication, it seems like recent investments have completely erased this backlog:

Part of me has to wonder if this is just because PSA has been the de-factor choice of grading submissions and maybe SGC's backlog was a bit easier to contend with-because notably PSA is still quite backlogged.

SGC also announced a price hike on their base rate to $25/card from $15/card.  On their website, SGC estimates a 20-25 business day turnaround on a standard submission.  If they can live up to this sort of turnaround time, I wonder if maybe they could cut into some of PSA's territory.

This brings up a dilemma for collectors---wait the extra time to get an order back from PSA, or submit to SGC at a quicker turnaround time, yet with a card that might ultimately have a lower resale value.

Have any grading experiences with one of the third party grading companies?

Let us know how long your orders have taken and whether you might consider going to SGC if it means a quicker turnaround time.