A frequent point of confusion I encounter with novice collectors relates to card values and why their card will not earn a Gem Mint PSA 10 grade.

Collectors read articles about big-time PSA 10-graded cards selling for millions and assume they've hit the jackpot. I deflate their excitement and help explain the nuances of condition, card grading, and the variation in card values.

Earning a PSA 10 grade on average is quite hard, but is highly dependent on a card's age, scarcity, and condition sensitivity.

Newer cards generally have a higher probability of earning a PSA 10, since a collector will immediately protect a card after pulling from a pack.

In this piece, we'll examine statistics relating to the odds of earning a perfect PSA 10 (Gem-Mint) card grade.

What Does A PSA 10 Grade Mean?

PSA 10 is the highest condition grade offered by PSA, and is equivalent to a card that is defined as 'Gem-Mint'. PSA defines a PSA 10 card as virtually perfect, but does allow for some minor centering issues.

A PSA 10 card must have perfectly sharp corners and perfect borders, with no staining issues or marks. Centering is not to exceed 55/45 to 60/40 in the front or 75/25 on the reverse.

What Are Equivalent Gem Mint Grades At SGC and Beckett? 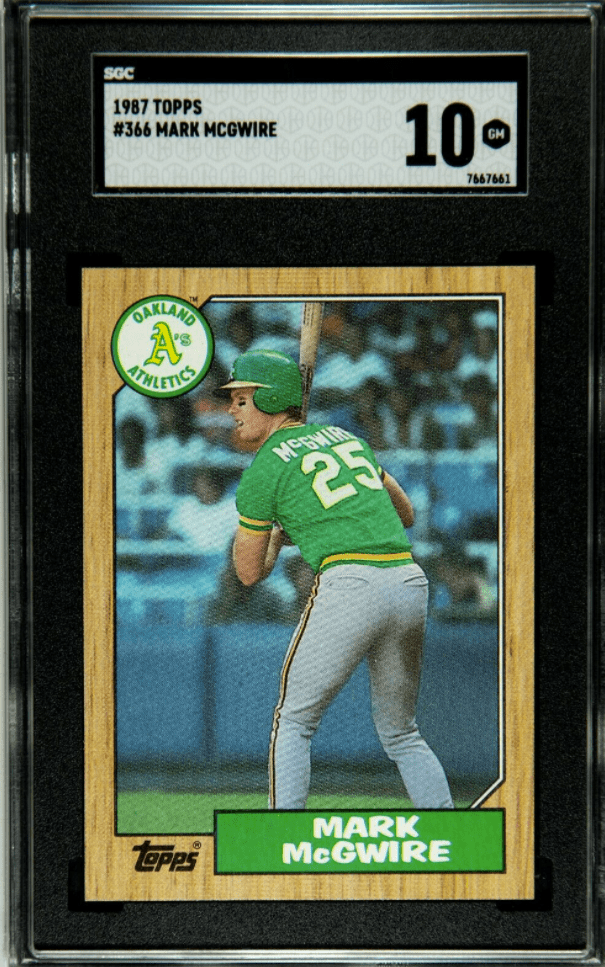 However SGC, also has what they call a 10 'Pristine' grade which according to SGC is a "virtually flawless" card with perfect centering.

These are also called SGC 'gold-label' cards.  See below for a Vlad Guerrero Jr SGC 10 Pristine (10-PRI on the label). 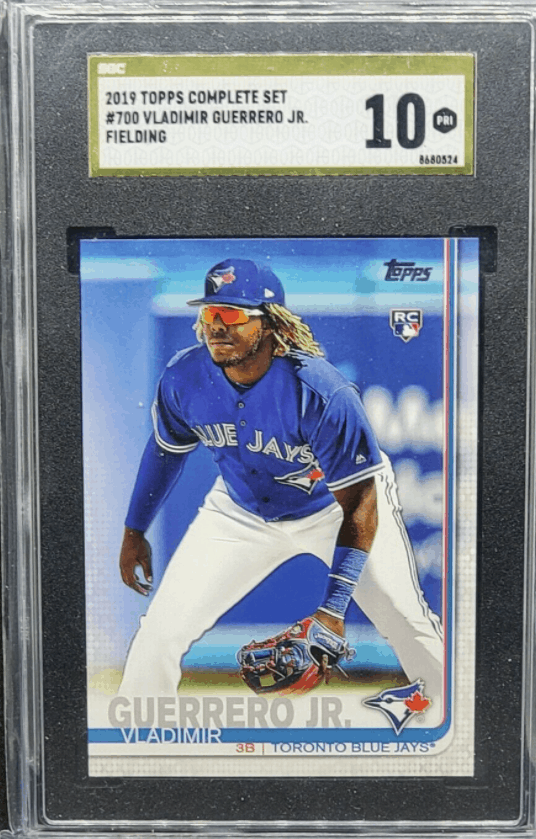 Beckett Grading Services or BGS uses a similar sort of terminology as SGC does.

Since BGS uses four sub-grades (centering, borders, corners, and surface), if a card receives four 10 subgrades, it receives a BGS 10 Black Label Pristine which tends to be more valuable than PSA 10 cards in most instances. 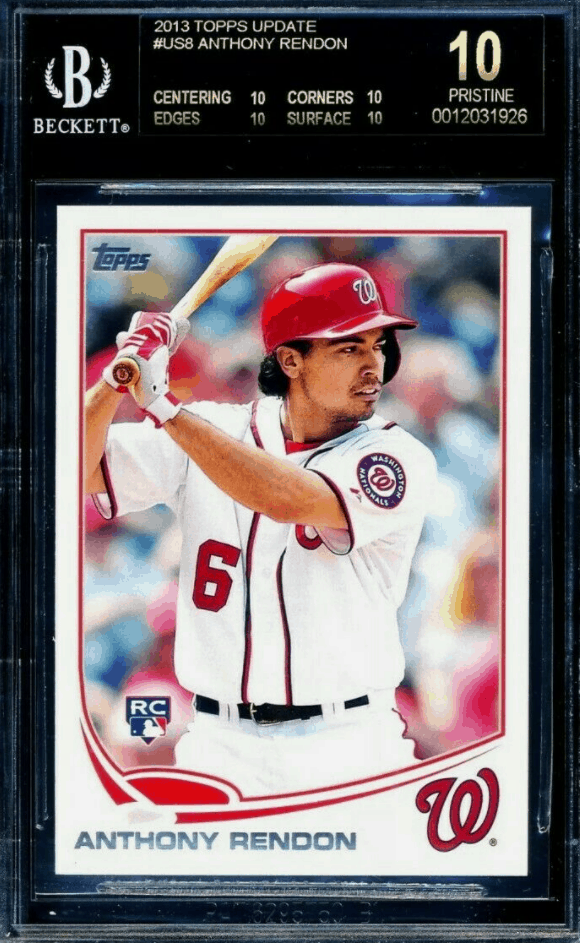 Here's a Jordan rookie below that scored a 9.5 on three subgrades with one 10 subgrade, hence an overall 9.5 (Gem Mint according to Beckett) score. 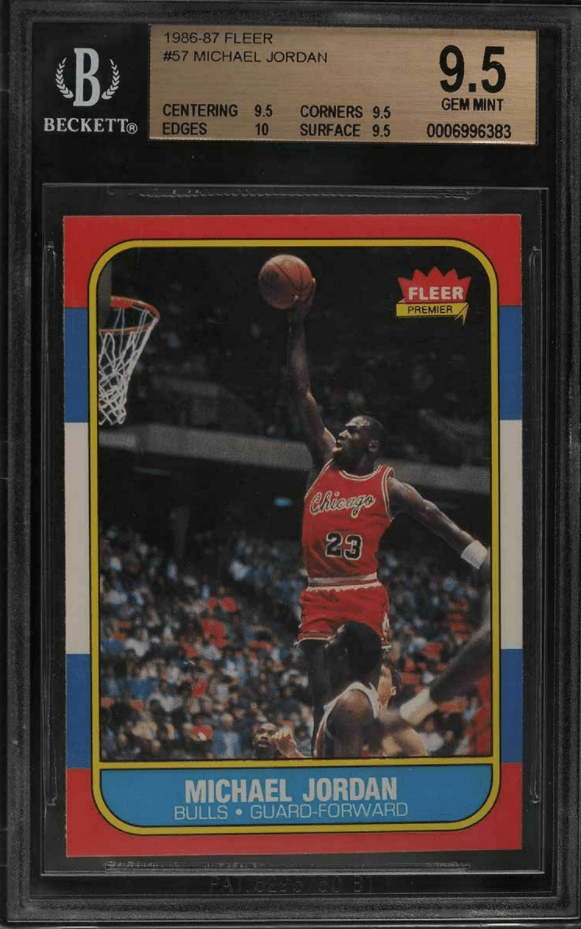 Note that Beckett Vintage Grading (or BVG) does not use subgrades, but does also have a 10, 'Pristine' rating.  Super confusing right?

NOTE That cards sent to Beckett will be graded with a BVG (Beckett Vintage Grading) case if they were produced in 1981 or prior.

What Factors Determine If A Card Is A PSA 10 Grade?

A card that qualifies as PSA 10 'Gem Mint' doesn't necessarily have to be perfect.

All grading companies agree that a Gem Mint card must have a flawless surface and perfect corners and borders, but with PSA, some variance in centering is allowed.

Taken from our Sports Card Grading Tutorial and from the PSA website:

According to PSA, in order to earn a pristine PSA 10 (or Gem-Mint) rating, the card must be a ‘virtually perfect card’.  The corners must be sharp, with no staining and original focus in tact.

55/45 or better centering, sharp focus, four sharp corners*, free of stains, no breaks in surface gloss, no print or refractor lines, and no visible wear. A slight print spot visible under close scrutiny is allowable if it does not detract from the aesthetics of the card.

Centering 50/50 one way, 55/45 the other. Corners Mint to the naked eye but subtle wear is allowed under magnification, smooth edges, a few extremely minor print spots detectable under intense scrutiny.

What Are The Odds Of Getting A PSA 10 Grade?

A PSA 10 grade is not an easy feat, but is easier for newer cards, especially those that are less condition sensitive. Older, vintage cards produced before card grading was even a thing are much tougher to find in pristine condition.

GemRate is a great website that provides a breakdown of PSA 10 grades for all recent card grading submissions. The percentage of cards earning a PSA 10 grade can vary wildly from year to year. Here's data for a 1992 Upper Deck Michael Jordan #23 card which has white borders and is less condition sensitive than the 1986 Fleer Jordan. It is clearly easier to score a PSA 10 grade. Overall, 15% of 1992 Upper Deck Jordan cards submitted have earned a Gem Mint grade from PSA. Another example of a tough to find Gem-Mint rookie is the 1979 OPC Wayne Gretzky PSA 10 rookie card, which recently sold for a whopping $3.75 Million.  I had about 100 emails after that sale from collectors that though they would be opting for an early retirement.

You might be looking at the edges of this card and wondering how the heck it got a 10 grade, given the rough edges. But the 1979-80 OPC cards were cut differently and many cards have those rough cut edges. 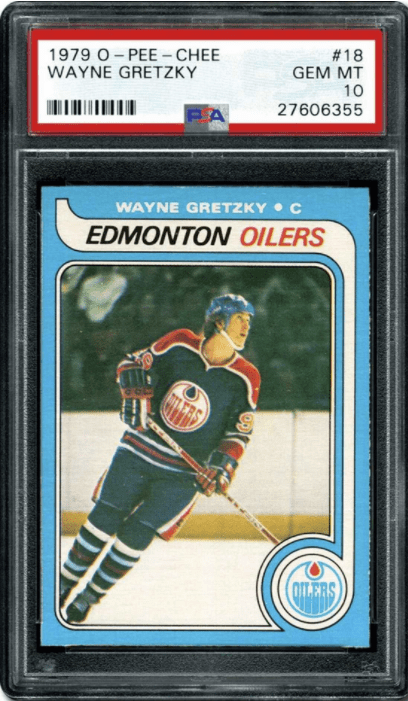 The 1979-80 OPC (and Topps) hockey sets are definitely what I would call condition sensitive due to the blue borders.  Anytime you have a card with dark borders, the potential for border wear increases greatly.

We can again assess the possibility of scoring a 10 on an OPC Gretzky rookie card. How many OPC Gretzky rookies have earned a Mint PSA 9?  89.

It probably makes sense now, why a Gem Mint PSA 10 Gretzky OPC rookie is worth almost 20x that of a perfect 10 Jordan rookie---it's that there are only 2 Gretzky's out there, making it a much harder card to find in Gem Mint condition.

Again, we will reiterate that the odds of receiving a PSA 10 are very, very dependent on the year in question, the set's susceptibility to condition issues and the variation in the print quality from the factory.

That's out of over 250,000 T206 cards that have been graded by PSA.  Of course, this is a 110+ year set--it would be nearly impossible to have a card stored and kept in immaculate shape for that many years. 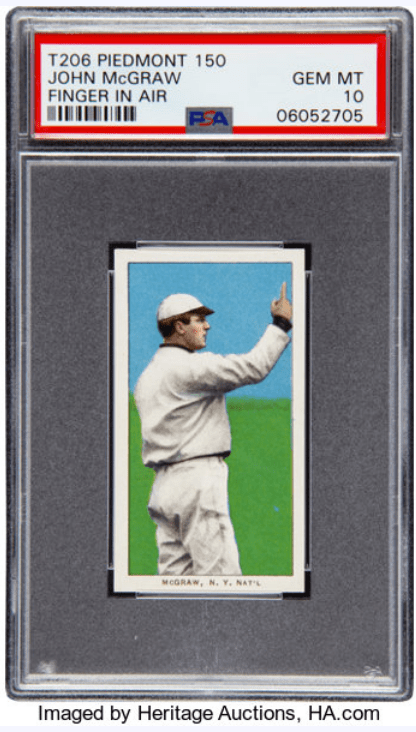 Now, we don't fish too much in newer cards, but I'll use an example of a 2011 Topps Update Mike Trout rookie card, which in most cases, probably went straight from a pack to a card holder, preserving the condition.  In addition, the white borders make this card not what I would qualify as 'condition sensitive'. 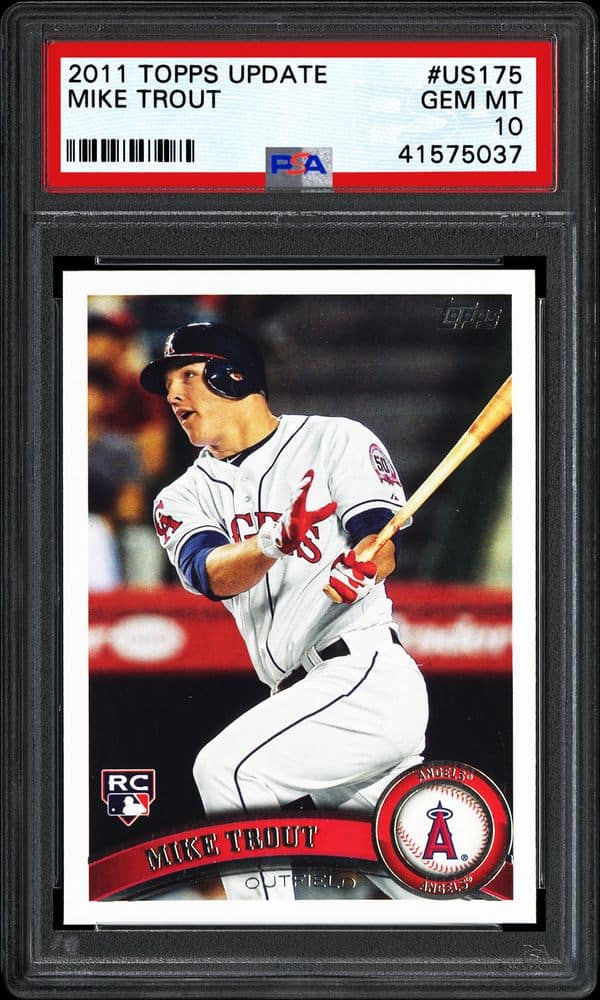 PSA has awarded more that 48% of Trout rookies submitted with a PSA 10 Gem-Mint grade! Thus, there can be massive variations in percentages of PSA 10's based on the year of the card, print quality problems or any condition sensitivity.

It's impossible to put the exact odds of potential success on a PSA 10, but you can determine the overall possibility based on examining the PSA Population reports or using GemRate.

For some sets it will be easy (aka Topps Update Trout) to get a PSA 10 and for some it will be nearly impossible (Gretzky OPC Rookie card or even more so the T206 set or any pre-ward vintage cards).

Remember, grading isn't free and the costs to grade can quickly add up.

Have any questions on this piece?  Feel free to leave a comment below or shoot us an email at help@allvintagecards.com