A History Of PSA “Flips” (And How To Detect Fakes)

Over the years, PSA has made various changes to the labels on its PSA holders (or ‘flips’ as most in the hobby call them) and the actual plastic ‘slabs’ themselves. Some variations are not as noticeable as others, but it’s important to know the difference when buying graded cards.

This guide was designed as a resource for collectors to help distinguish the different PSA ‘labels’ and ‘slabs’ to help identify some of the fake holders and labels that exist.  I haven’t run across many fake PSA slabs, but they do exist and can usually be spotted if you know some of the telltale signs.

We hope this guide on PSA holders is a useful resource.  In future posts, we also plan to examine the history of both Beckett and SGC graded holders as well.

This is the first ever holder issued by PSA; notably the first ever card graded by PSA with the Cert# 00000001 was the famed Gretzky T206 Wagner card which obviously got PSA in lot of hot water.

These initial PSA holders were only issued for two years and if you have any familiarity with PSA labels, these ones look quite different.  First, the font on these 'flips' (or labels) is completely different from the font used in later labels.  Also, the zeros have a distinct line and the serial number bar code is much longer as compared to later versions. 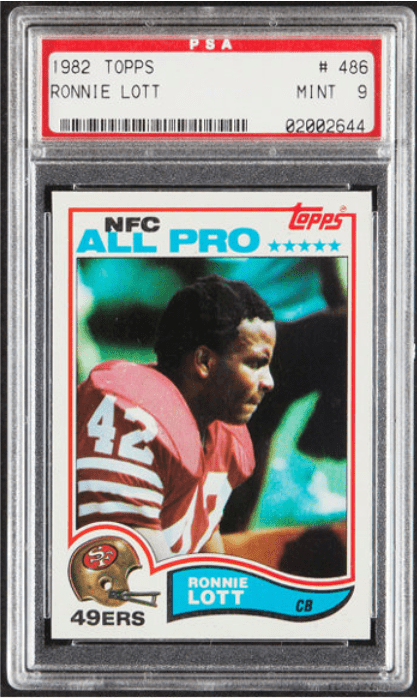 Here's the rear of the Type One PSA holder.  Note there is a PSA hologram in the back of the flip, with the PSA logo on the left side of the flip.  PSA graded cards in these holders were only issued for a few years and thus rarely come up for sale in comparison to later PSA holders. 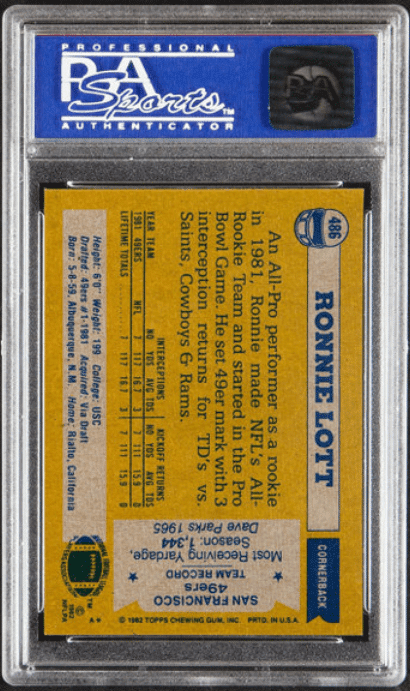 The second holder issued by PSA had a completely new font that would remain (mostly) until present day.  Note also the slashes removed from the zeros.  The 'flip' still has rounded white corners, but the bar code is much smaller in width.   Note that PSA also started stamping 'PSA' on the bottom right of the holder.  These holders were issued from 1992 to 1999. 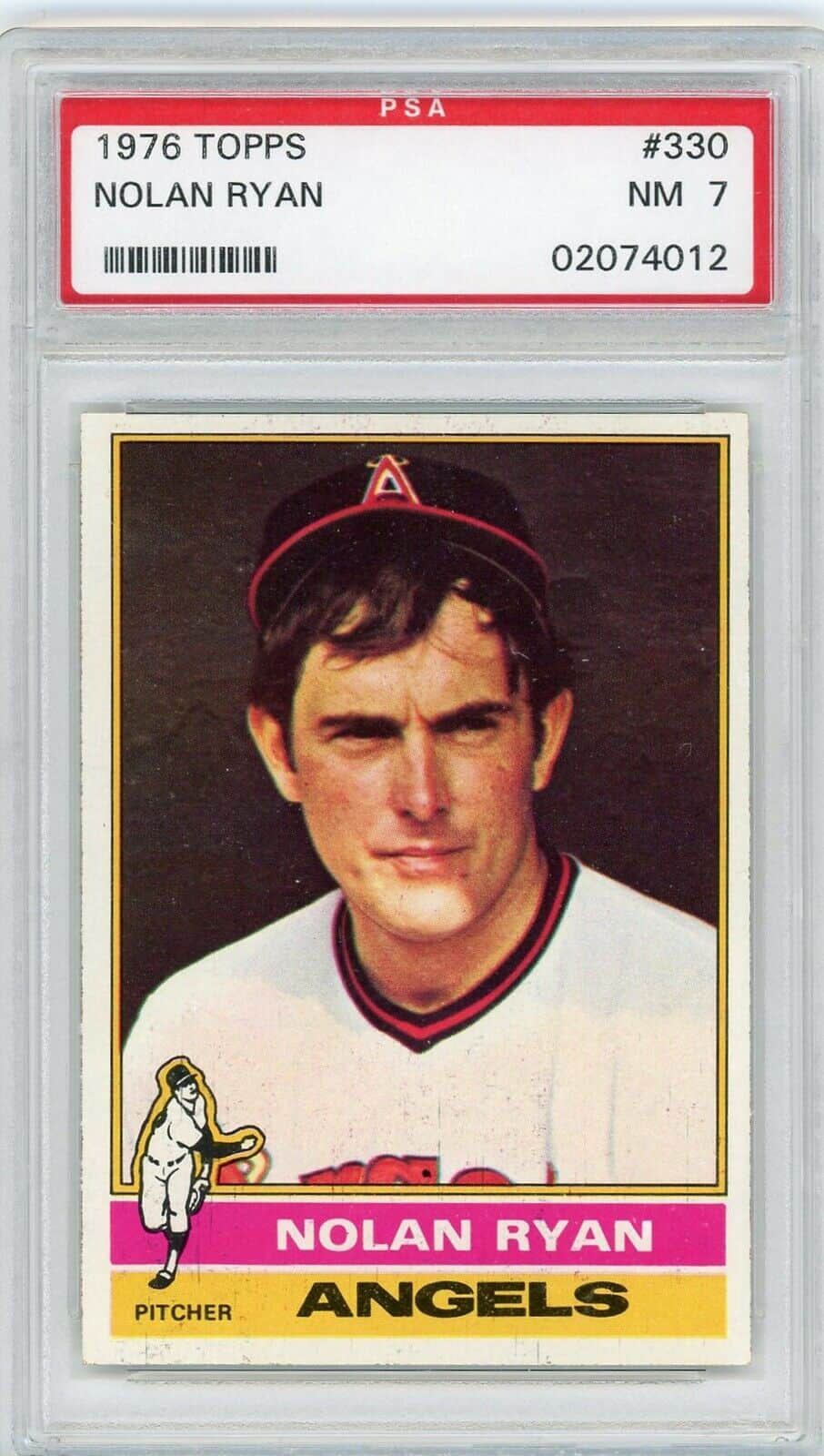 The rear of the PSA flip is mostly the same. 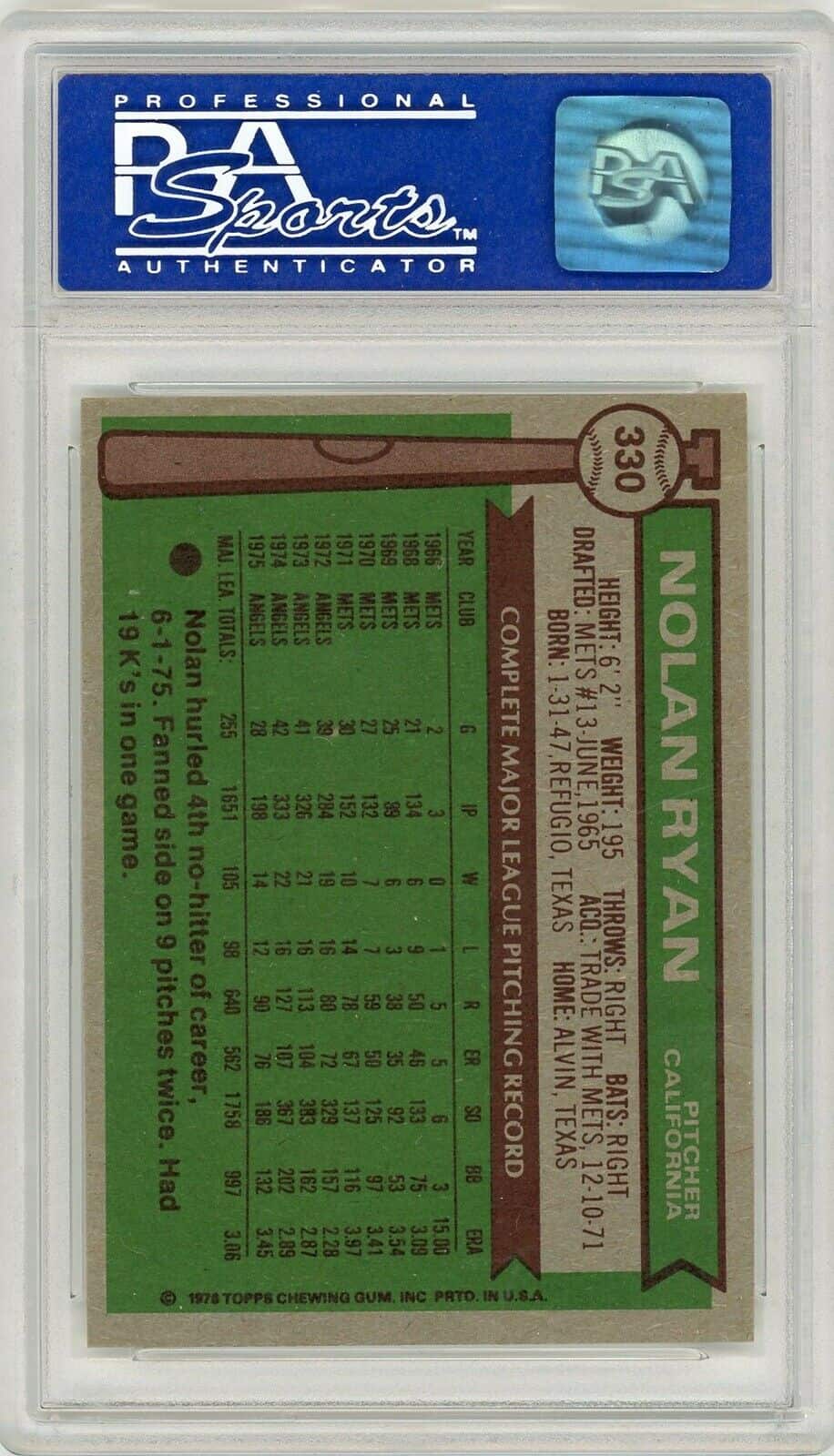 The third holder issued by PSA has a similar front label but a minor change to the rear of the flip. 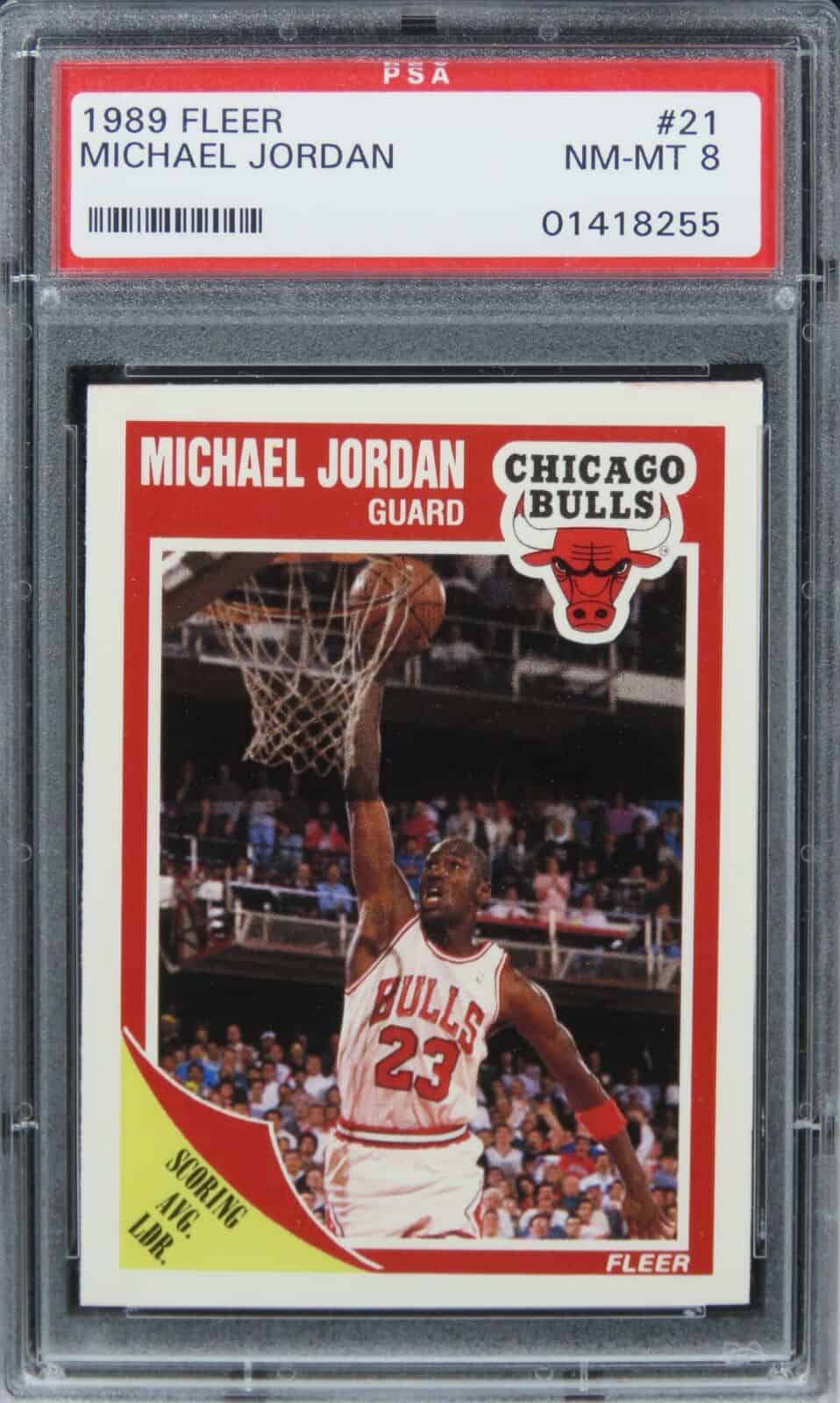 The most significant change on the back of the slab is the hologram on the flip which changed to a Collector's Universe logo (from the PSA logo on the previous flip). 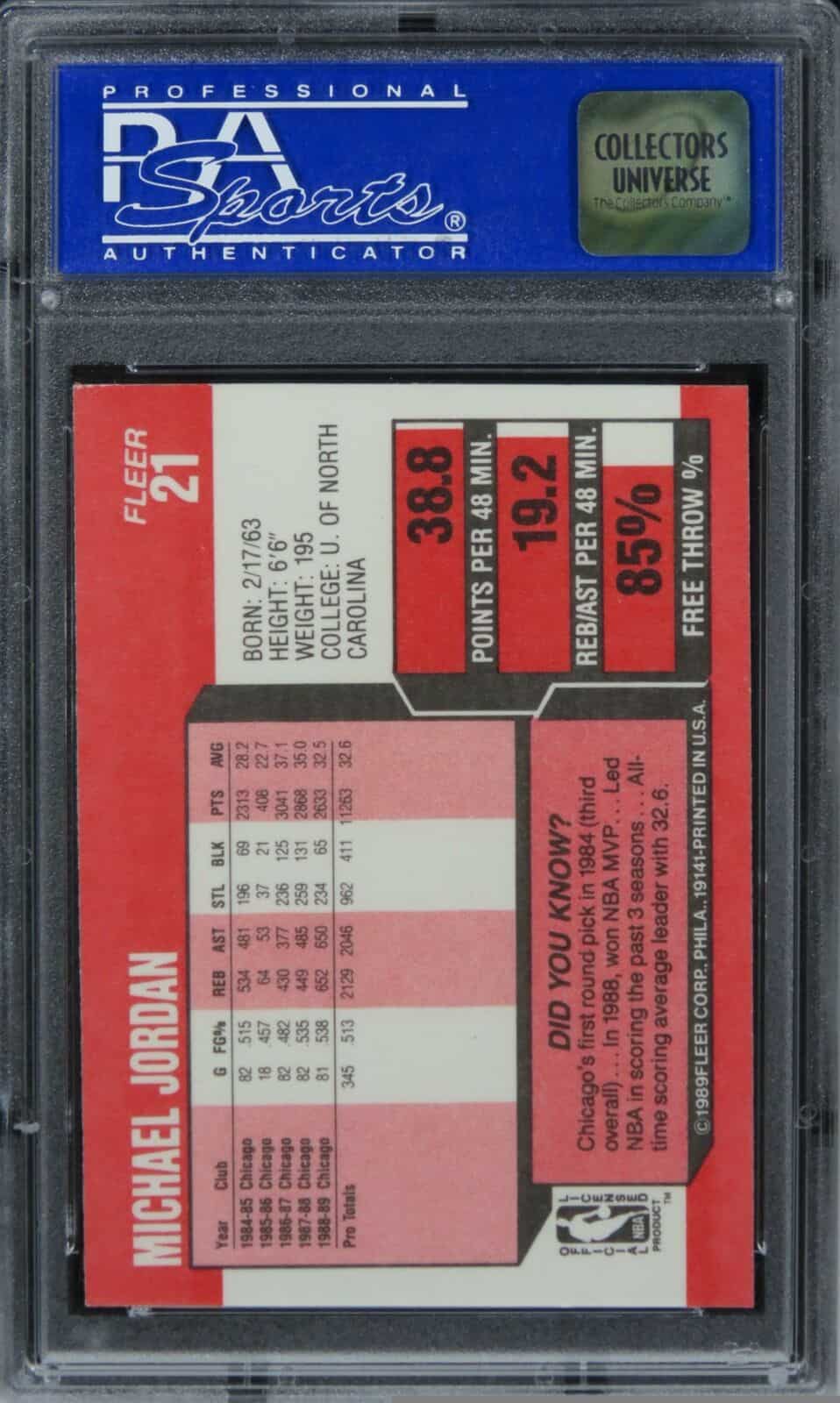 PSA took an odd step back by changing the font similar to the first issued flip, yet without the slashes in the zeros.  Notably the barcode has been shifted to align with the left side of the label.  In addition, the grade of the card has been pushed to the left.  The rear of the label has not been changed and still has the Collector's Universe hologram.  Issued for an unknown period of time in the early 2000's. 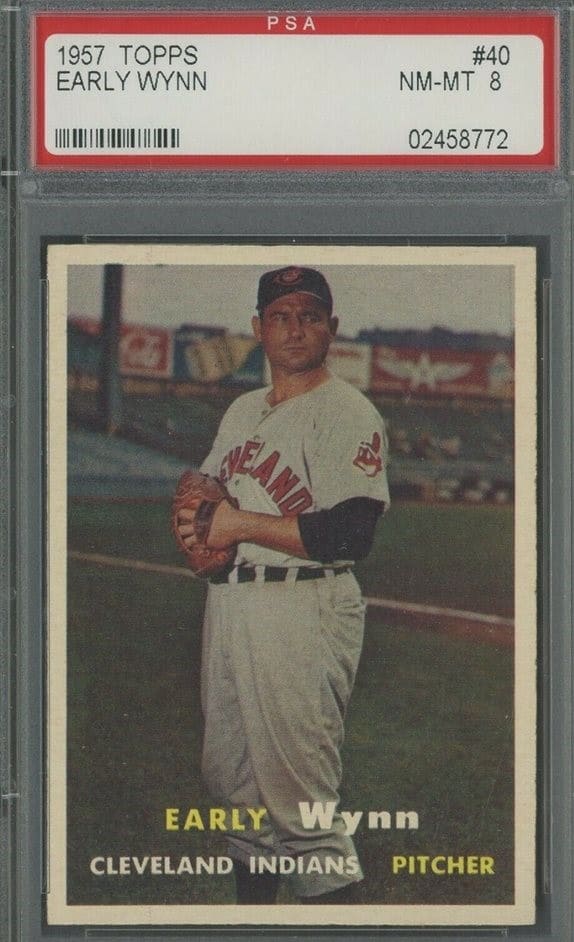 Fonts on the Type 5 flip are reverted back to the style on the Type 2 and Type 3 flips.  Also the white container on the label is changed to square corners.  One other noticeable change is with the 'PSA' lettering in red on top of the flip.  This is actually a tougher to find holder. 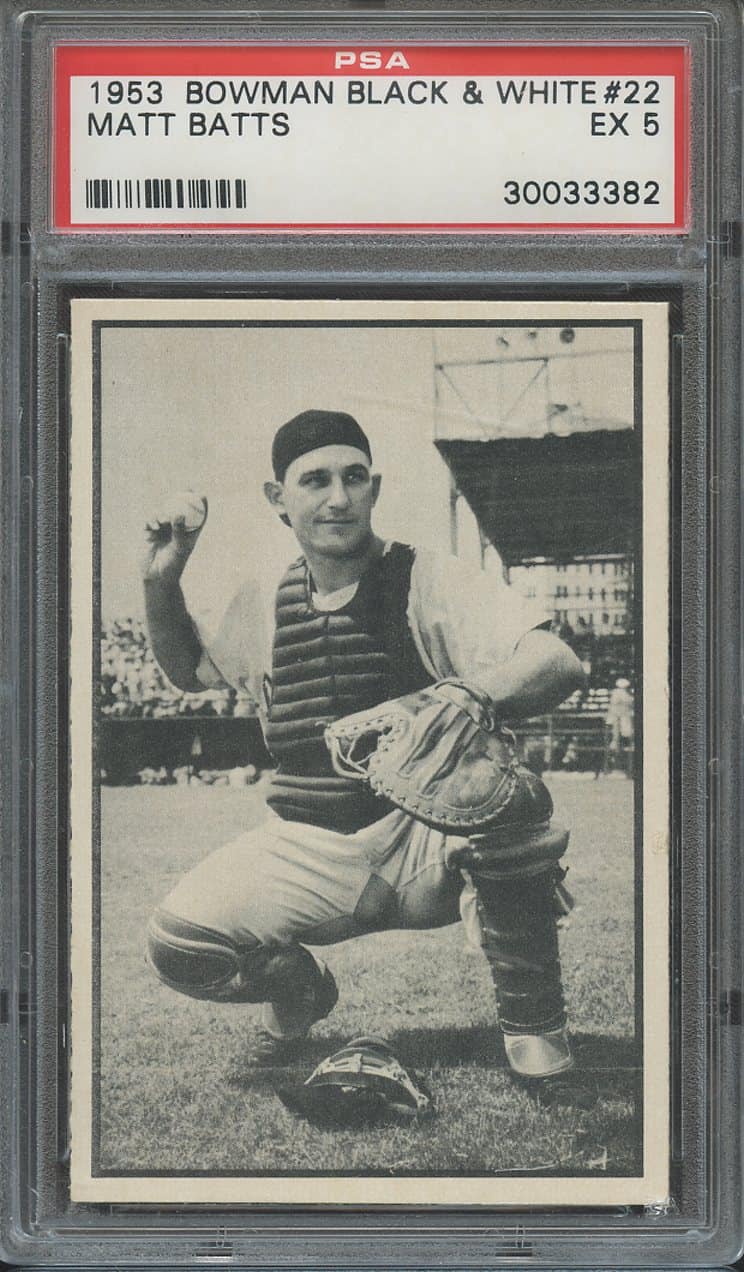 On the rear of the flip, the hologram is removed and the paper is a light blue.

The font and borders are identical to the Type 5 flip. 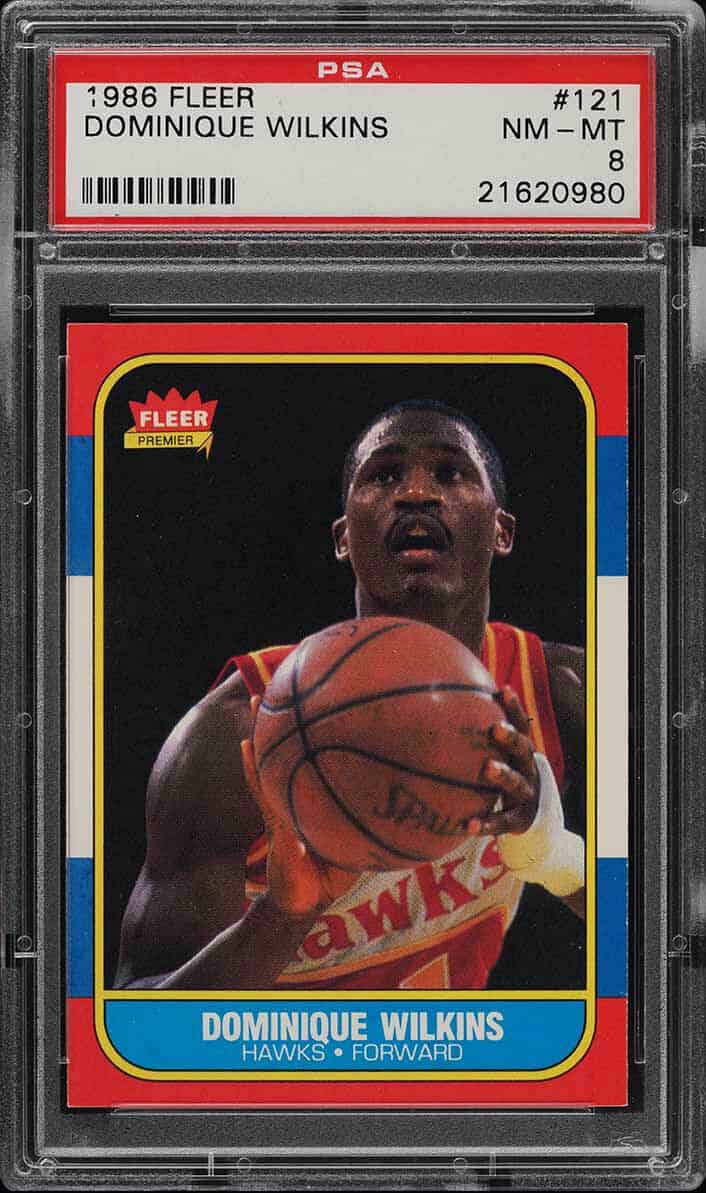 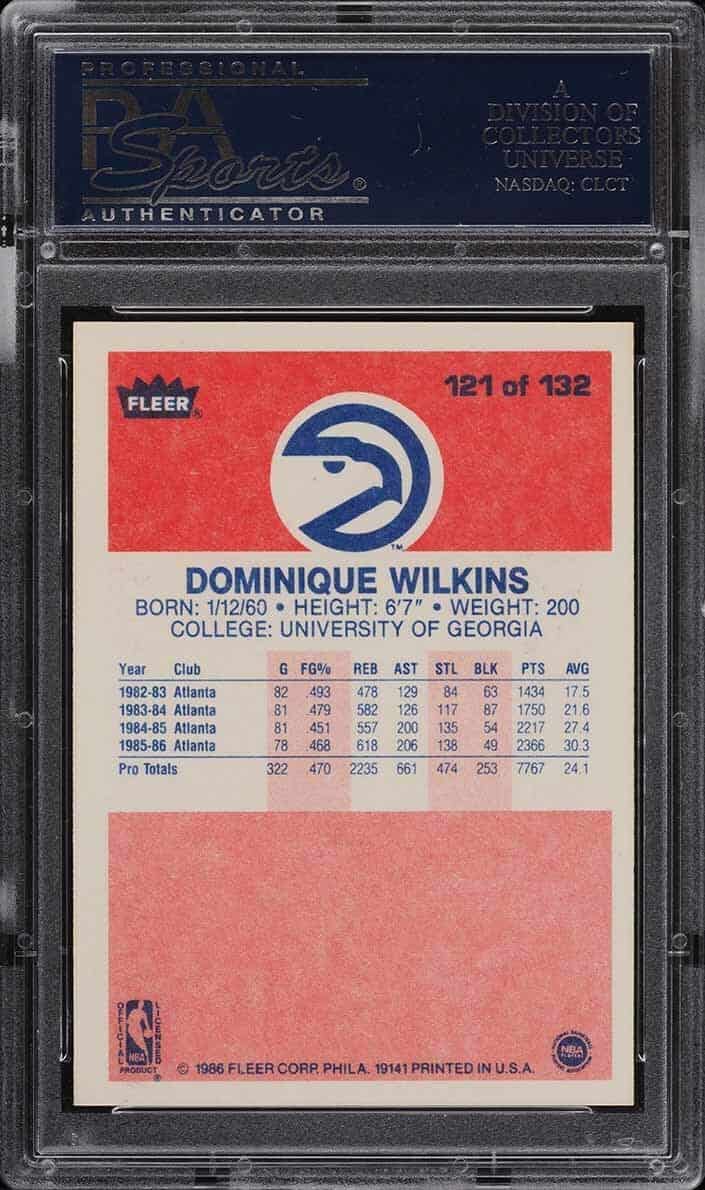 Only significant change is that PSA moved the card's numerical grade to the line below the condition descriptor (NM-MT in case of Dr J below). 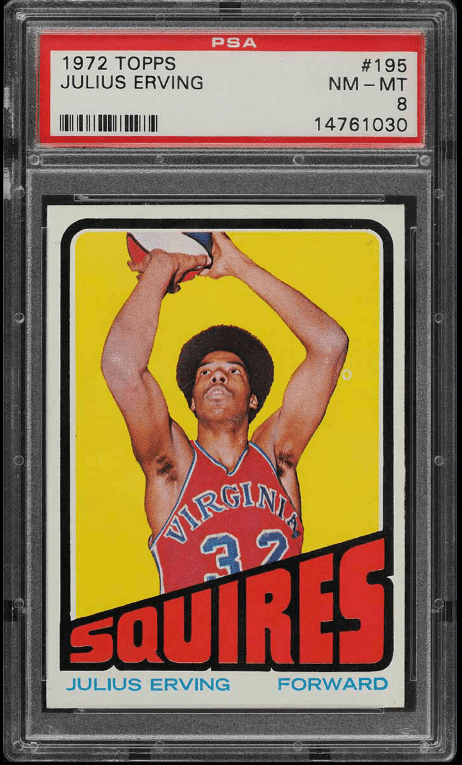 Rear of flip is unchanged. 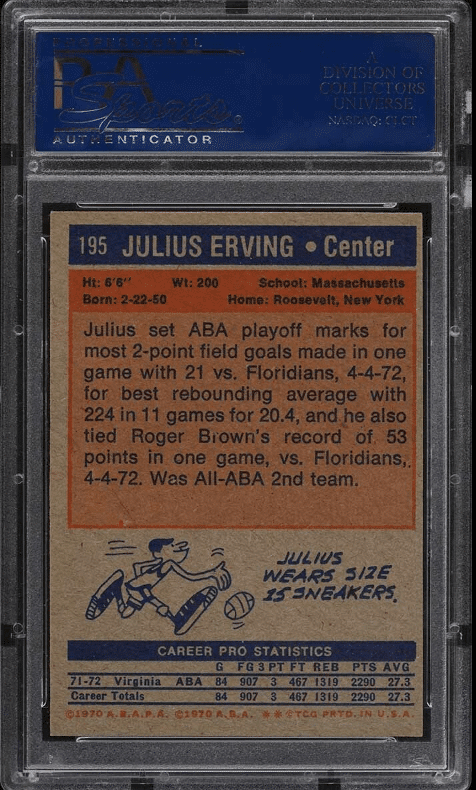 As shown there is a small 'PSA' hologram added the bottom middle of the front label.  Otherwise the rest of the card is identical to the previous flip.  This new hologrammed flip was introduced in 2015 by PSA. 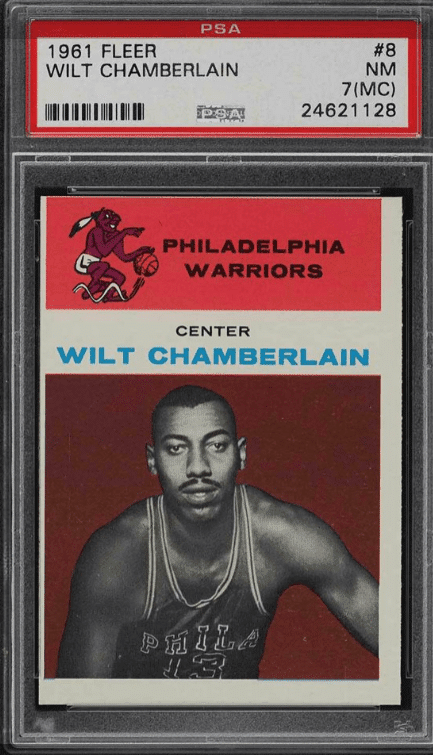 The back wording and lettering are identical to the previous generation flip, yet as shown below there is a hologramming of the lettering. 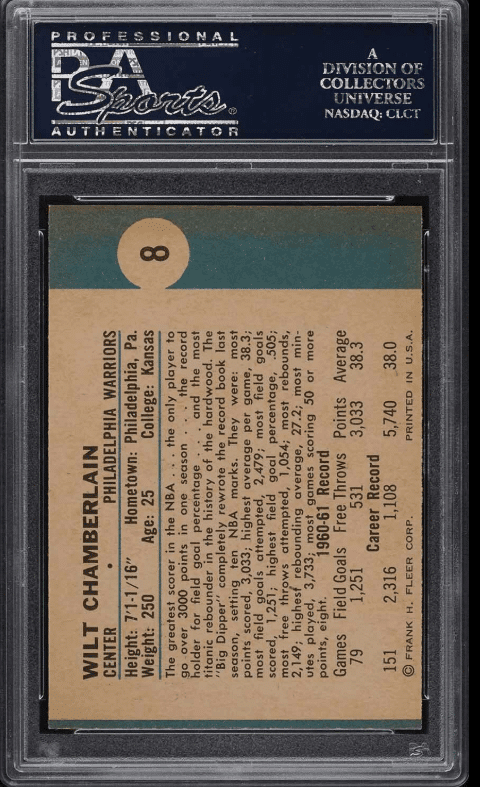 Front of the Type 9 Flip is identical to the Type 8, only variations on the back of the label. 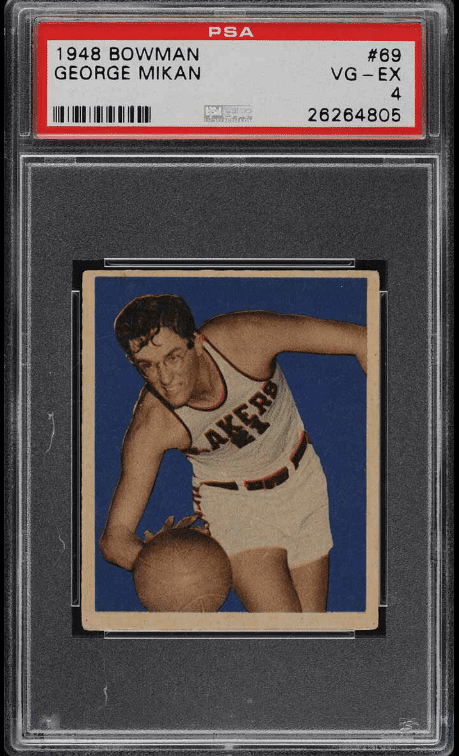 As shown below, the barcode and the cert number for the card are added to the back label. 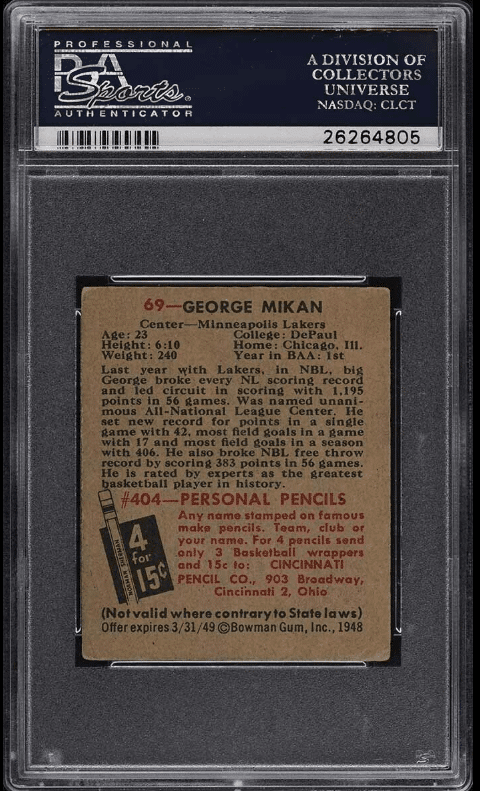 In 2017, PSA really stepped it up introducing their new 'Lighthouse' holders.   As shown on the front, there is a new PSA hologram which they note was "upgraded to proprietary Lighthouse ™ technology, which creates an “on/off” illumination effect when rotated."

The white paper of the flip has also been upgraded as PSA notes: "instead of mere white behind the label copy, the wave-like brush strokes of “fugitive ink” embellish the background". 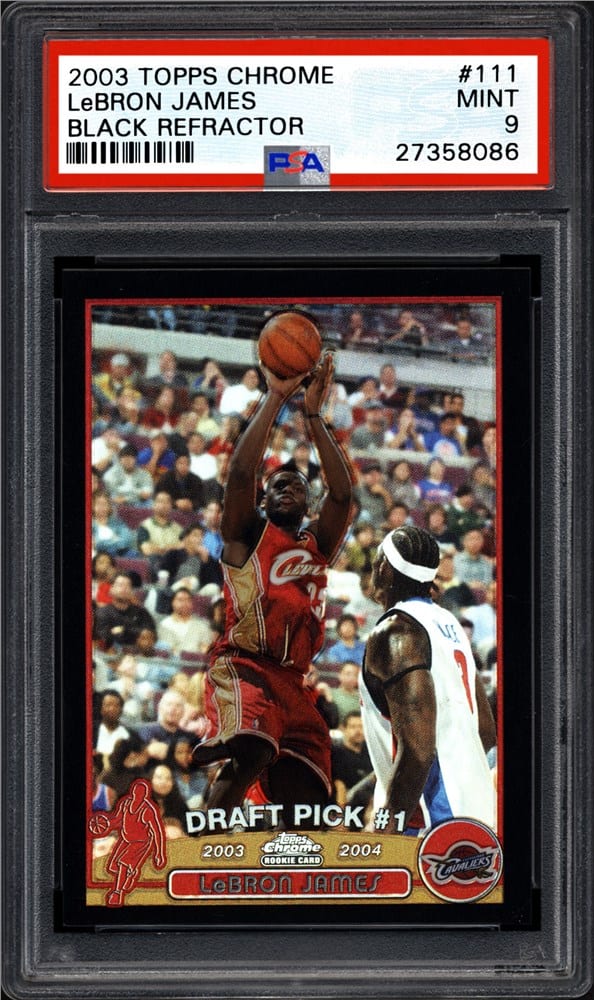 The back of the flip was also updated.  As PSA notes:

The company’s trademark blue still spans the back of the label. While, a large, centered PSA Lighthouse logo is flanked by a stylized “PSA” (in lieu of “Professional Sports Authenticator”) and a QR code.  Tamper-evident fugitive ink graces the area below the blue background. 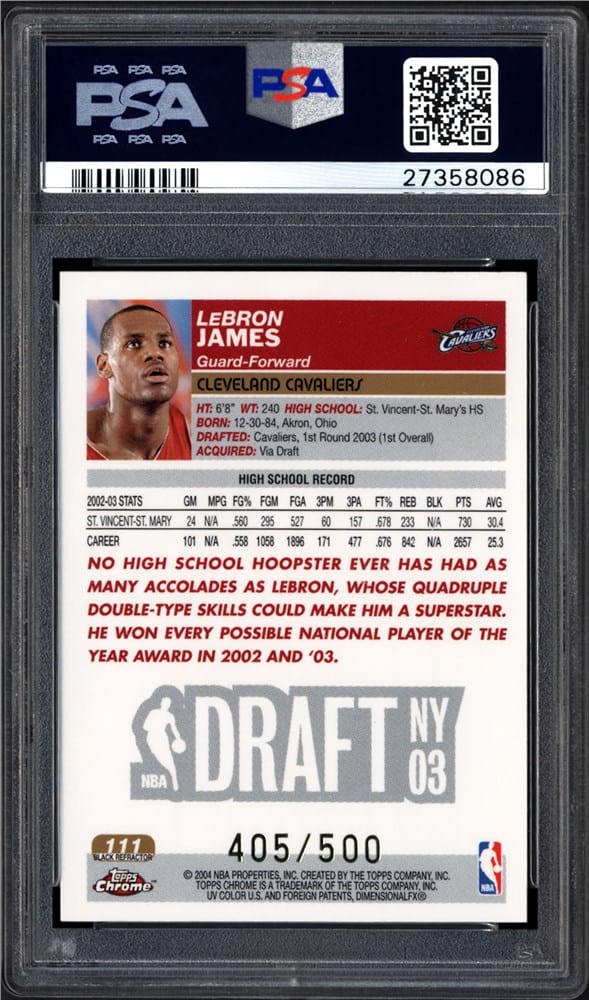 There are several ways in which scammers will try to tamper with PSA holders.

The most common is when a scammer cracks a legit PSA slab and reinserts the card with a counterfeit or an altered card.

Thus, let's say said scammer buys a PSA 9 card on eBay, they would then 'crack' the holder, removing the card.  They would likely purchase a raw, lower grade card for much less money and trim it to get close to Mint condition.  Then, they could sell the newly resealed slab, while resubmitting the initial 'cracked' card back to PSA.

Thankfully the new Lighthouse holders make this process pretty impossible due to the 'fugitive ink' and new holograms.  Trying to piece together one of the newer holders is likely a tall task.  However the early holders are the ones that the scammers target, usually the ones without a hologram, as they are easier to split and would easily frost over when the halves were split and the seal was broken

Frosting Along The Edges Of The Slab

When purchasing a graded card online, be sure to inspect the PSA slab for a frosted type look around the outside edges.  When scammers break a PSA holder (or 'crack') the holder in half to remove the card, the normal clear edges will become frosted.

One way the PSA holder may show tampering is what is commonly referred to as "frosting" along the edges where the clear plastic starts to exhibit a cloudy appearance. In some cases, you can actually see minor fractures or cracks in the plastic as a result of the violation. This occurs when the sonic weld is broken and can be seen in various degrees.

Here's a cracked PSA slab,  where we can see significant frosting on the left hand side of the case.  Image courtesy of Collectors forum. 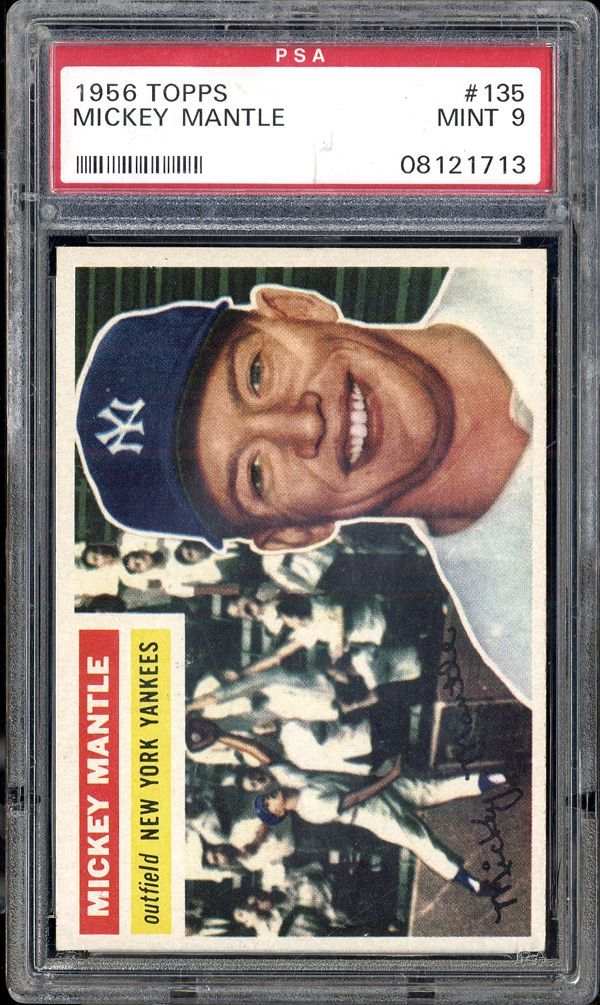 Doubled Up Labels Used To Cover Up Original Flip

Another common scam is cracking a PSA slab and then creating a new label to post over the original flip.  As PSA notes in their security guide:

Sometimes, a forger may attempt to simply add a fake front to a real PSA label. In turn, an extra layer of paper is used. As a result, if you attempt to do what we just described above while using a lamp or strong light, you will not be able to see through it. In essence, the label is now too thick to see the opposing side of the label. By utilizing this technique, you may also be able to see portions of the authentic label underneath, which may now be covered by the fake label on top. This is not always the case with forgeries, but it is an example of what some criminals will attempt to do and another way to avoid fraud. Furthermore, while the embedded hologram technology on the current PSA label acts as a deterrent, some forgers will try this technique by attempting to replicate an older style PSA label.

I've seen a lot of fake Jordan's in cracked PSA holders that use forged PSA labels. This is when you have to pay very close attention to the style and fonts used by PSA.  Note we also discuss Jordan rookies in fake flips more in detail here.

Here's a fake card in a real PSA holder with a fake label using a legit PSA cert number for a PSA 9 Jordan. 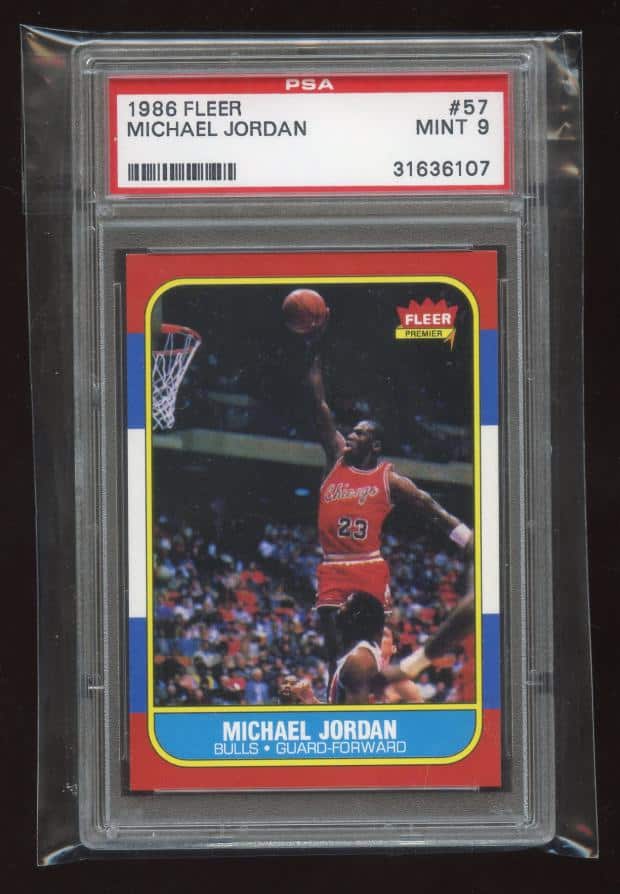 Note, be sure to look up the cert number on any PSA graded cards before buying.   On PSA's website you will also be able to see any recent sales at eBay or at auction houses, so if there is data available, make sure you look at the recent sales and ensure that the card for sale is the same card that was sold at any past auctions.