The widespread price increases throughout the hobby have led to a surge in demand for sports card grading.

This has led to significantly increased wait times across all of the third-party grading companies.

PSA, SGC, and Beckett just can’t keep up.  With forced closures during the peak of COVID leading to a backlog, the excess demand in recent months has led to significant delays for all of the grading companies.

Thus, if you have a card you want to get graded, you could be waiting upwards of six months to get your card back.

Now of course there are ways to spend a bit more and get your order expedited.  In this guide, we’ll examine the wait times for all of the grading companies and what it costs to get your cards graded today at each company.

Why Are Cards Taking So Long To Get Graded?

Back in March with the peak of COVID shutdowns, the grading companies were not operating at all.  Forced to keep their doors closed, this led to an increased backlog of cards that were not getting graded.  The problem was significantly amplified due to the fact that more people wanted their cards graded.

With cards such as Michael Jordan's rookie card increasing exponentially, collectors across the US were now looking to get their raw cards stamped with a seal of approval from either PSA, SGC or Beckett.  Even before COVID struck, PSA had been pushing back to a significant surge in modern card grading requests.

Collectors on the hunt for that PSA 10 from a freshly ripped back were becoming too much to handle for PSA.  Pre-COVID, at least from PSA's perspective, the solution was to improve the backend operations, meaning hiring more graders and working to streamline operations more efficiently.

PSA is the hobby's most well known grading company and ultimately has been one of the graders that has seen the most impact from the recent surge in demand. PSA currently lists updates to its turnaround times here.

Thus, how long does it take to get a card graded by PSA?  It depends. Hopefully the recent grading changes will help improve the backlog, but ultimately you could be waiting upwards of four months to get your cards back (depending on the current demand).

PSA had previously looked to alleviate the issues by hiring more staff, yet a recent update shows that they are now taking more drastic measures.

Here are some of the recent updates from PSA that were announced on October 1, 2020:

- Temporary Halt Of Their 'Economy' Service:  Note that the Economy service costs $20 per card and is typically the most common submission for PSA.  They noted that since January the volume of submissions to PSA has more than doubled. Thus, unless you are getting in on a bulk dealer submission or using one of PSA's value or Collector's Club grading specials, the costs for a regular submission are now $50.  Note the $50 is basically the base line cost per card and goes up from there based on expedited services and declared value.  See PSA's pricing chart.

Note this is probably going to put a big dent on the flippers in the hobby--meaning those that can turn a $20 submission into a $100 profit. If they are now facing a $50 submission fee, this is likely going to significantly going to decrease number of lower value submissions.

Also big question -- what does this do to existing PSA graded cards? Does it inflate the value of lower end PSA 10's that might not be worth grading at $50...such as this PSA 10 Will Clark from the 1986 Topps Traded set.  I think for most collectors submitting lower end cards (declared value less than $99) the PSA Collector's Club is still a good option.  $12 per card, with a 20 Minimum card submission.  And the club is only $59 per year.  So, if you have a bunch of Will Clark's to grade the Collector's Club is your best bet. 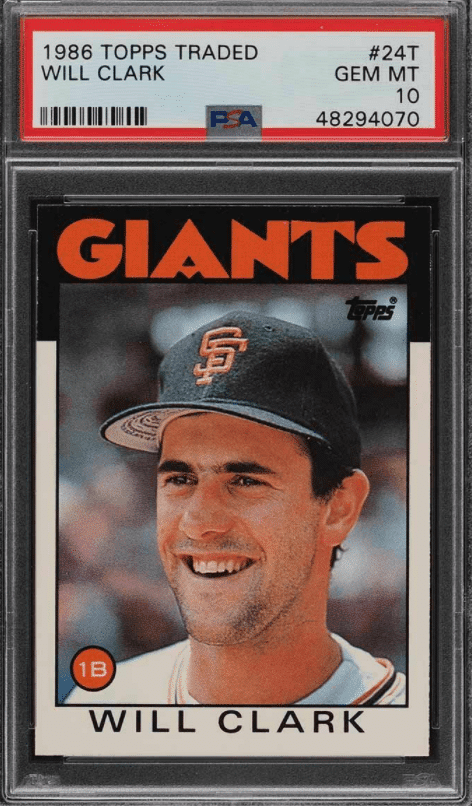 Note that it's not just PSA seeing a huge increase in demand.

SGC has also made their own changes.  From their update in July:

A few months back, a seismic shift in the psychology of the modern card collector took place. In what seems like the blink of an eye, SGC went from being the vintage grading company to the up and coming juggernaut steamrolling its way into the modern space. All at once, the entire hobby sent us their cards and was excited to give SGC a try.

The early days of this change (which now feel like they were years ago rather than merely a few months), were like nothing any of us had ever seen before. The submissions were growing exponentially and, with that, so were the challenges. Our company, which made its name delivering on both service and turnaround time, was now staring down the barrel of processing delays like we’d never imagined.

SGC ultimately decided to move to two different levels of service, while providing 'a very fluid, but transparent, and (hopefully) accurate idea of when to expect your cards'.  The two services (cleverly named) are called 'I Can Wait' and "Need Them Now"

I Can Wait - Turnaround Times that fluctuate with demand, with costs starting at $10.  Note that on SGC's website, they estimate a 52-57 business day turnaround, although many have waited much longer.  They note that this will be updated on their website as frequently as needed.

Need Them Now - Estimated 3-5 Business Day Turnaround and starts at $100 per card.

Beckett Grading has also been severely backed up and just a look at the turnaround times on their website shows how bad it actually is right now.  For example, 30 day submissions are now taking  5-6+ months!!

What Are Your Thoughts On The Delays in Card Grading?

Will It Lead To Less (or possibly more) Submissions?

This Blowout Forums thread led me to think about some of this a little bit more in depth.

One user posited that "graded cards will trade at a higher spread above raw than they previously did because fewer of them exist".

It's quite possible that we haven't seen the last of price increases from Beckett (and likely SGC).

Does this in turn lead to graded cards being worth much more than raw?

Let us know your thoughts in the comments section below!