At the end of 2020, his PSA 10 rookies were selling for around $750K, an increase of over 15x.  His lower graded rookies also increasing by a nearly similar amount.  Question-where do Jordan Rookie Cards go from here?  Leave me a comment and let me know your thoughts** 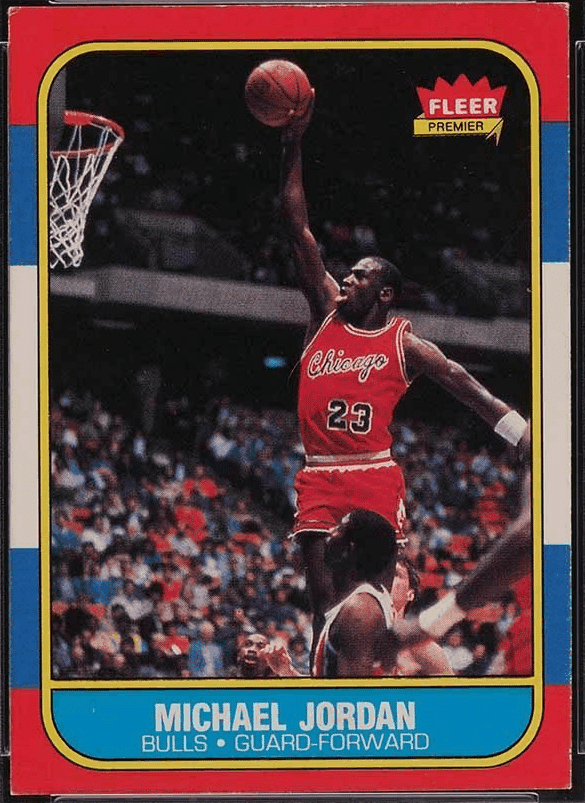 Sometimes hype and excitement get in the way of reality.  And in the case of Michael Jordan’s 1986 Fleer rookie card, I’m worried that this might be the case.

Never have I seen a 30+ year-old card garner so much attention–and fueled by what?  A documentary?  Are people so stir crazy that they somehow forgot that Michael Jordan was one of the best to ever play the game?

I bring all of this up due to the fact that Jordan’s rookie card has begun to reach levels of hysteria that normally crop up in the way of a new rookie phenom.  But here we are talking about the 50-something-year-old Michael Jordan.

As a case in point, I put together a spreadsheet back in April of 2019, tracking the prices of Jordan’s rookie (see below).  In a little more than a year, Jordan’s rookie card has increased across the board by the tune of nearly 200% in most grades. 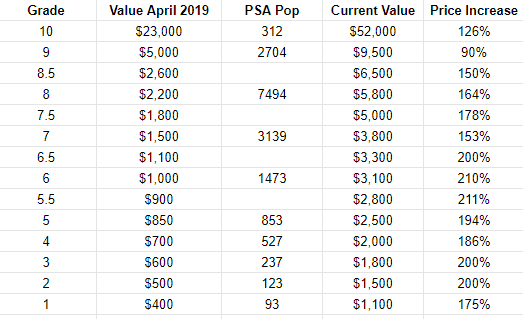 Guys, i love the Jordan rookie, but I think it might be getting a bit bananas.

Are people waking up from a COVID-19 slumber and finally realizing that Jordan was one of the best ever?

I'm confident that nearly 90% of the people buying Jordan's right now and driving up the price also have zero idea what the existing Jordan rookie population looks like.

In case the corona-virus ate into your internet connection, here's a snapshot from PSA--remember this is just PSA (and not Beckett or SGC or any of the other third party graders). 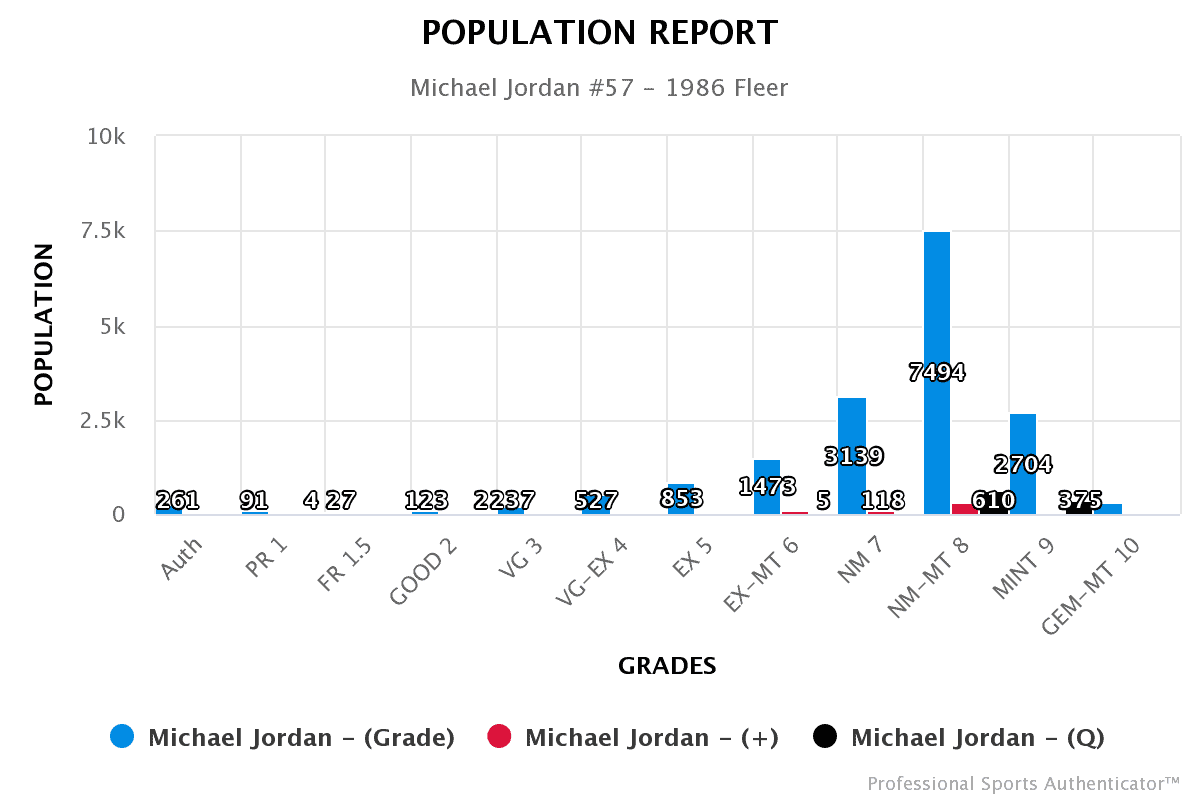 If you need help with the math, PSA has graded a grand total of 18,917 Michael Jordan rookie cards.  This does not include any of the raw Jordan cards that exist.

So if you spend your hard earned Coronavirus stimulus check on a PSA graded Jordan rookie, don't forget there are 18,916 other PSA Graded copies out there (and that's just via PSA).

So, while we're at it--why don't we get into SGC, one of the other big third party graders.  As shown below, they've graded an additional 1798 Jordan rookie cards.

All in all, between SGC, Beckett and PSA, the 1986-87 Fleer Jordan Rookie has been graded 31,648 times.  Note this does not include the raw, ungraded population.  I'd estimate that at a minimum to be in the neighborhood of 10K-15K cards.  Thus Jordan's rookie card likely has a population of close to 50K.  Do you think anyone paying a 200% markup in a year realizes this? 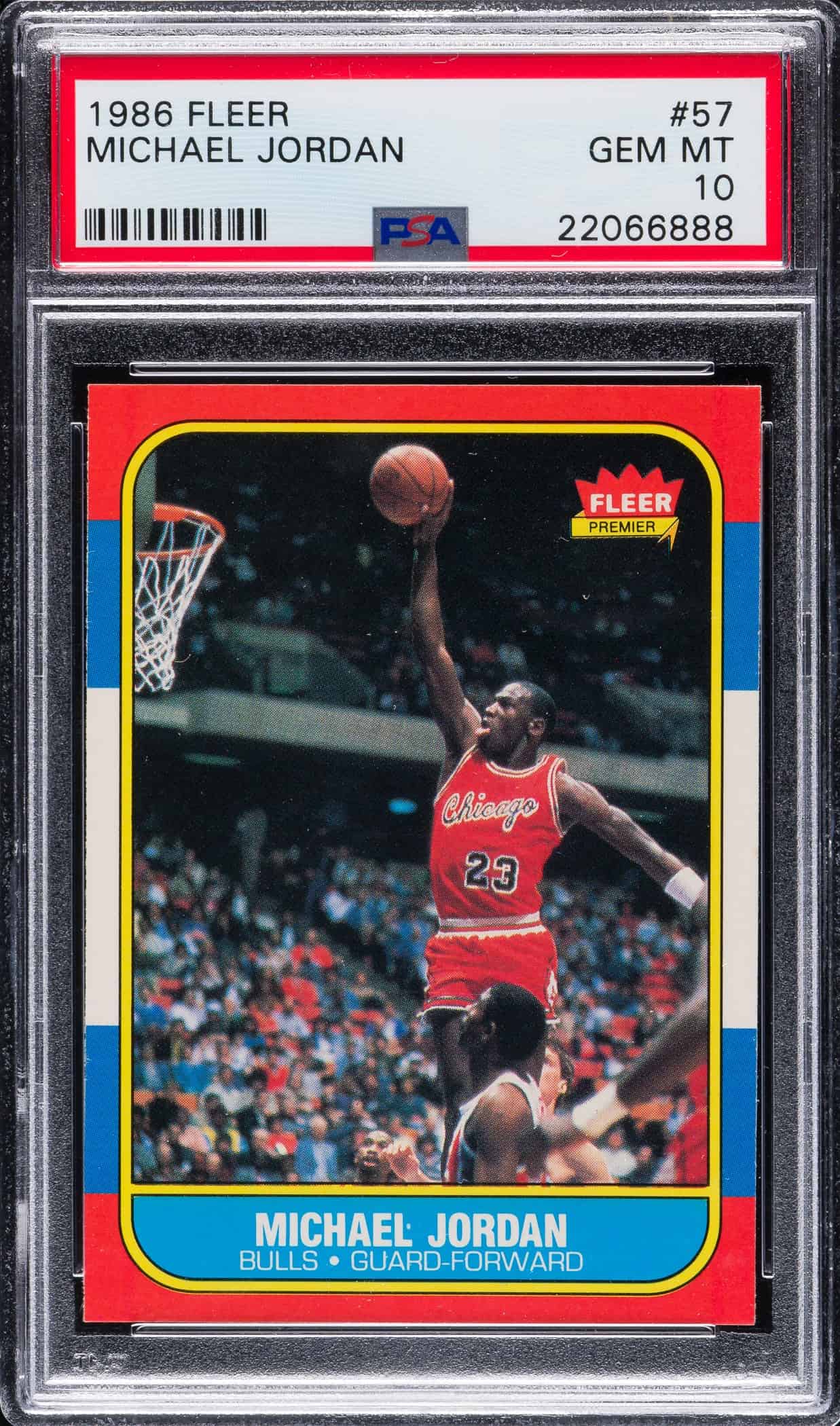 This sale of a Gem Mint Jordan Rookie broke sales records at a recent REA auction.

And just like anything that soars in value, the insanity surrounding the Jordan card has led to many newbie card collectors getting scammed out of thousands of dollars.  I noted in my last piece about Jordan counterfeit rookies that the inquiries to me were becoming a bit overwhelming.  Well, it's probably gotten about 10x worse since then.

One poor guy that emailed me got scammed out of $2000 after buying a fake on eBay and his credit card company needed extensive documentation to prove it was a fake---oh and the seller was claiming that the buyer swapped out the card.

Look, I could very well be off here and the Jordan Rookie card might increase by another 200% over the next year, it's very well possible.  I'm just saying to be careful out there--first off you're paying a huge premium on a card that isn't all that scarce, and second there are millions of scammers looking to take advantage of you right now.

If you're going to buy one, please buy a graded copy and please buy from someone that at least has a good reputation and will stand by their sale.

And be sure to use our step by step guide to spotting a fake Jordan rookie.

Note here's a list of the most watched Jordan rookies on eBay.