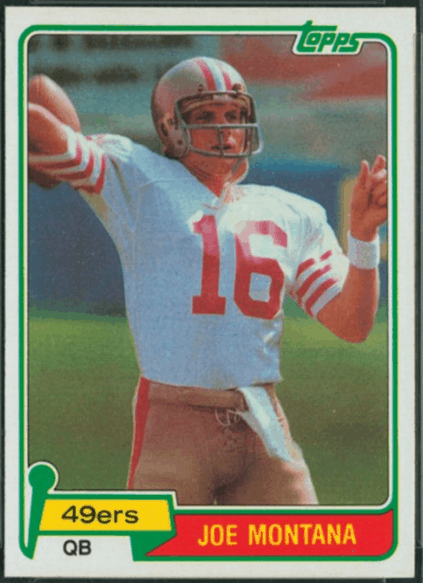 Growing up as a collector in the 80s, the 1981 Topps Joe Montana Rookie card was one of my prized possessions.

Montana was my favorite player, and since the Patriots weren’t all that great, I gravitated to the 49ers.

That Joe Montana to Jerry Rice connection was beautiful and Montana was my idol.

Montana’s rookie card was hot in the 80s, but back then, we didn’t know about production runs or have access to daily updated pricing.

Armed with what we know now, let’s take a closer look at Montana’s 1981 Topps rookie card, one of the hobby’s most valuable football cards.

Joe Montana As A Player

Joe Montana played for fifteen seasons in the NFL, thirteen years as a member of the San Francisco 49ers and two as a member of the Kansas City Chiefs.  Montana is often recognized as one of the best quarterbacks to ever play the game of football.

Montana wasn't a highly regarded prospect coming out of Notre Dame even as he was assembling a collection of some impressive last minute heroics.  His play earned him the moniker 'The Comeback Kid'.  Still the scouts weren't all that impressed.

“When the 1979 draft was approaching and the Cotton Bowl glow had worn off, the NFL scouts got together and started putting down numbers for Montana. One combine gave him a grade of 6½ with 9 being the top of the scale and 1 the bottom. Washington State's Jack Thompson got the highest grade among the quarterbacks—8. Montana's arm was rated a 6, or average. "He can thread the needle," the report said, "but usually goes with his primary receiver and forces the ball to him even when he's in a crowd. He's a gutty, gambling, cocky type. Doesn't have great tools but could eventually start.".”

The San Francisco 49ers took a chance on Montana in the third round and selected him with the 82nd pick in the 1979 NFL Draft.  As a rookie, Montana didn't get a ton of playing time, but mid way through the next year, Montana became the starting quarterback for the 49ers.

It didn't take long for Montana to make an impact - in his first full season as a starter for the 49ers in 1981, Montana led the team to a Super Bowl victory over the Cincinnati Bengals.  Yet it was a playoff game only several weeks earlier against the Dallas Cowboys that became one of the defining games for Joe Montana.

Known by many as 'The Catch', Montana led the 49ers to an improbable victory, driving the team downfield from their own 10 yard line and winning the game on a last second pass to wide receiver Dwight Clark.  Amazingly, a young Tom Brady was at the game watching his hero in one of his many historic comeback victories.

Montana would go on to have one of the most storied careers in the NFL, winning three more Super Bowl titles, cementing his legacy in the football record books. While the new era of quarterbacks that came after him, such as Tom Brady, Brett Favre, Peyton Manning and Drew Brees have cemented their own legacies it is Joe Montana that paved the way for these new quarterbacks.

How Much Is Montana's Rookie Card Worth? 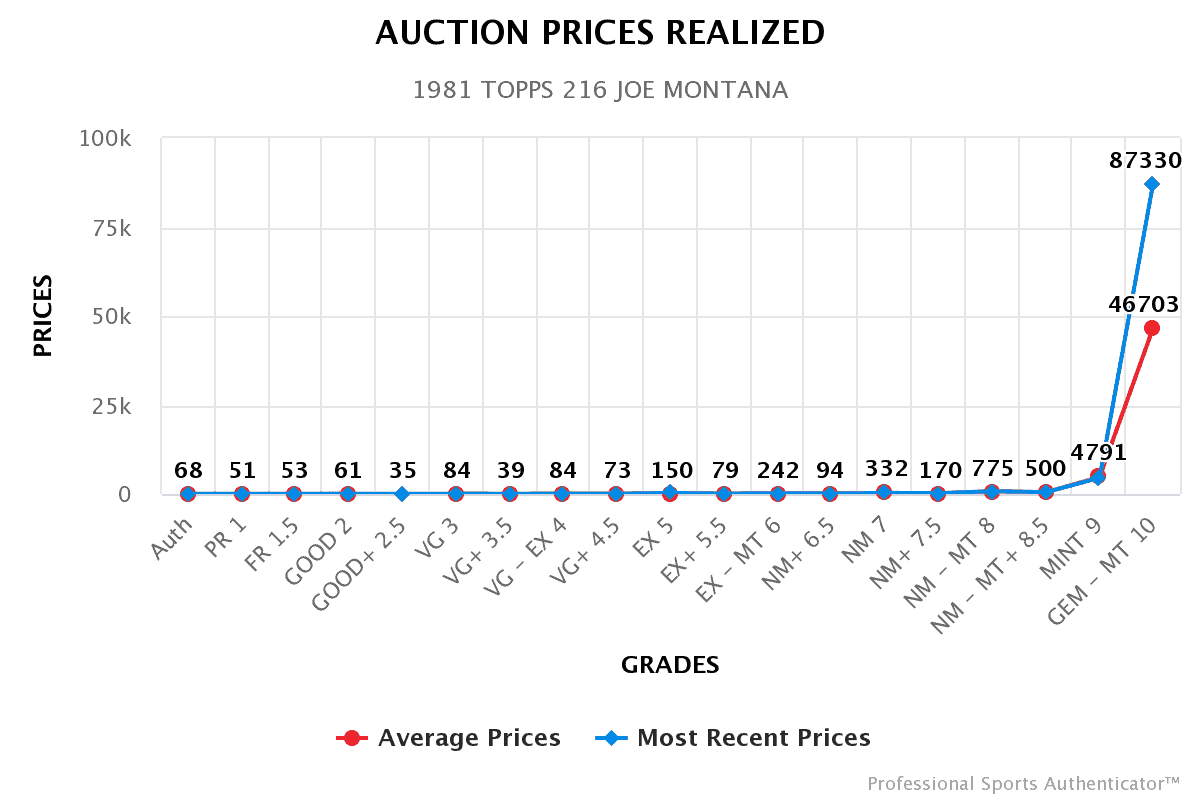 You might be wondering how or why a near mint copy of Joe Montana's rookie card sells for only $300.

Well it all has to do with scarcity.  And the facts are that the 1981 Topps set was produced in fairly sizeable quantities.  This wasn't quite the junk era, but Topps was pushing out a decent amount of cards in 1981. 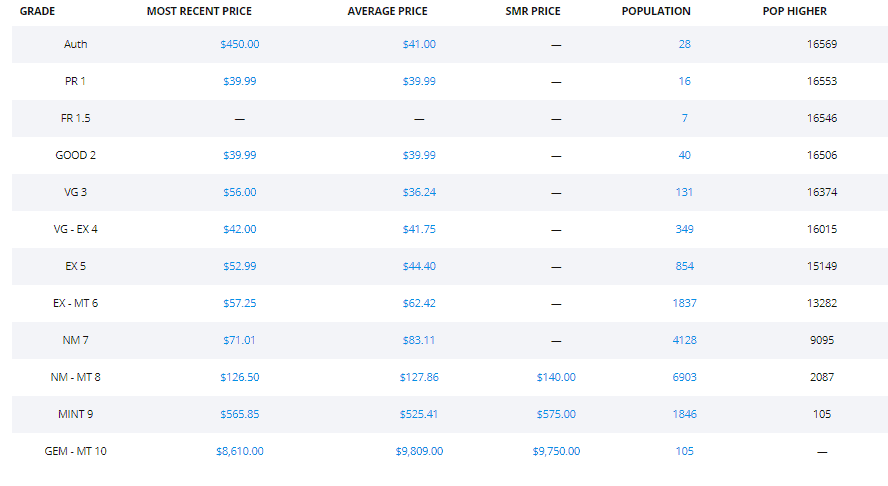 In total, PSA has graded nearly 19,000 copies of Montana's rookie (including qualifiers).  If we included the population stats from Beckett (~9000) and SGC (~1900), this number gets closer to 30,000 total graded copies.  And note this doesn't even include the raw population which many of can be found on eBay.

So, that's a seriously high amount of population for a card, thus one of the reasons, Montana's rookie, even up near Mint condition is not all that expensive.

I've seen sales on eBay for an autographed Montana Rookie card averaging about $1000 or so assuming the card is in Good or better condition. Note there is a Montana reprint rookie card that is often autographed and graded. These tend to sell for somewhat less, closer to $500.

For Montana, who is still alive, it's fairly easy to find these for sale, and of course, more could enter the population if he were to sign more cards. I don't really know however how many exist.

Collector opinion can differ on whether a rookie card should carry more or less value if autographed. Some see it as ruining a perfectly good and historic issue, while some see it as significantly enhancing the value of the card.

For me, given the sizeable population of the '81 Topps Montana, unless you can get your hands on one of the much rarer Gem-Mint copies, I'd probably opt for a graded, autographed copy. 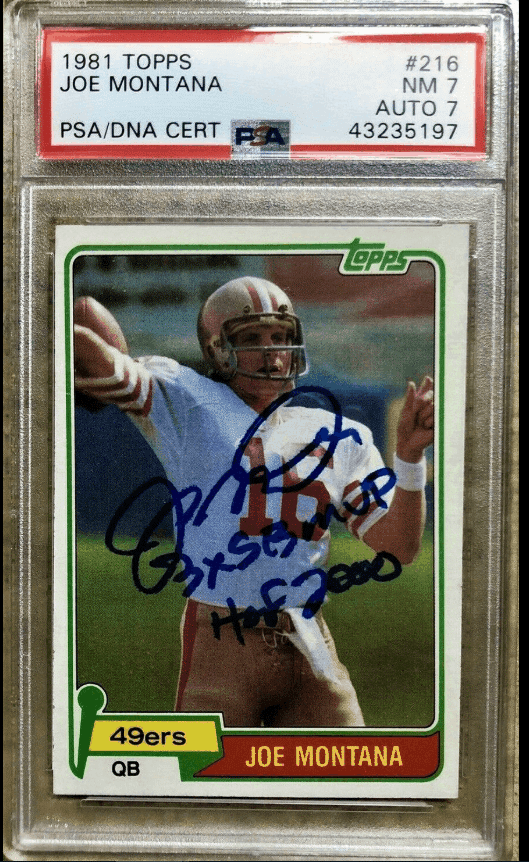 This signed Montana rookie is graded and certified by PSA.

But with such a huge population, it's hard to envision that the value of  Montana's rookie card will increase tremendously in the near future.  The card, while legendary, isn't quite up there in terms of demand as say a 1986 Fleer Michael Jordan card.  And to note, the Jordan rookie has been graded over 33,000 times!

If you're a collector and you don't care about the investment part of the hobby, then I think the Montana rookie card in Near Mint condition is a great card to have at a very affordable price.

If you are concerned about the excess supply, then think about looking for an authentic rookie card graded by PSA/DNA (which is PSA's autograph authentication service).  These as mentioned can be found for close to $1000 if you find the right deal.  I'd say these are the better long term investment.