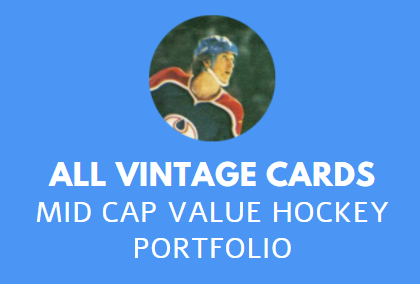 The All Vintage Cards Mid Cap Hockey Portfolio is a collection of ten Mid-Cap (or “mid-priced’) vintage hockey cards that we think have strong long-term investment potential.

For this All Vintage Cards Mid Cap Value Hockey Portfolio we have selected ten cards, each with a value of $1000 to $3000. 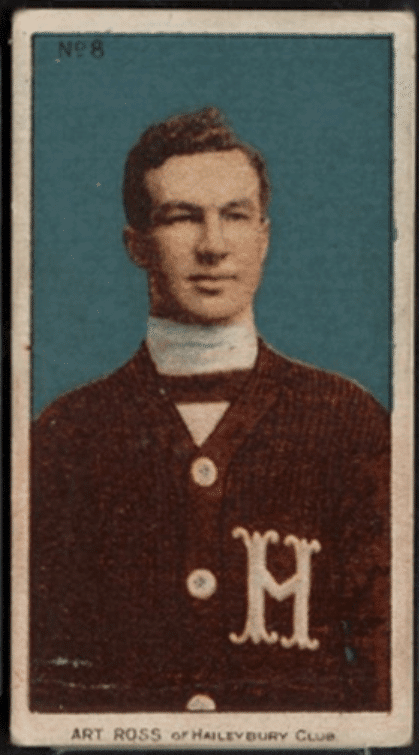 Why We Selected It For The Portfolio:  Art Ross is considered one of the best defenders to ever play the game of professional hockey. His contributions to the game led to monumental changes in the way hockey was actually played. The Imperial Tobacco company issued three hockey sets from 1910 to 1913. Their inaugural set in 1910 (also cataloged as C56 in Jefferson Burdick’s American Card Catalog) is considered to the first true hockey card issue.

Art Ross actually has two cards (#8, #12) in the C56 set, both considered to be his rookie card.  I chose card #8, but I think either are great long term investments.

Current PSA Population: PSA has graded roughly 100 copies of each so the card is fairly scarce and highly sought after among vintage hockey card collectors.  The cards in Excellent condition (PSA 5) run for over $10,000, but lower graded copies in Poor to Good condition can sometimes be found for under $2000. 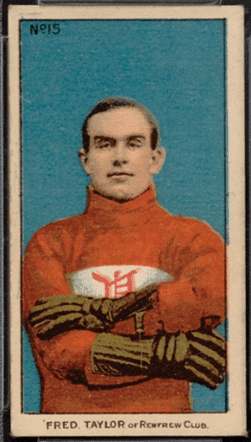 Why We Selected It For The Portfolio:  Known for his prowess as a skater, Fred “Cyclone” Taylor was one of hockey’s first true superstars.  Taylor actually earned the nickname “Cyclone” for his skating abilities and despite being a defenseman he was also a prolific scorer.  Taylor's C56 card is also considered his true rookie card and features "Cyclone" as a member of the Renfrew Creamery Kings where he played from 1909 until 1911 before leaving to play for Vancouver.

Current PSA Population: The C56 Cyclone Taylor card has similar scarcity to other cards in the set, with PSA grading roughly 120 copies to date. Taylor's card has a slightly lower value than that of Art Ross with Excellent grade (PSA 5) copies selling for around $3-$4K. Luckily vintage collectors can usually find Good condition copies of Taylor's rookie card for less than $1000. 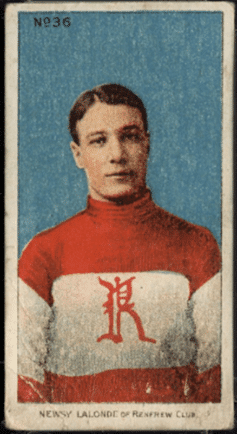 Why We Selected It For The Portfolio:  Edouard “Newsy” Lalonde was a star lacrosse player and one of the most well regarded hockey players of his time.  Nicknamed ‘Newsy’ by his peers while working at the paper mills as a boy, Lalonde was a gifted scorer, racking up 266 goals over 200 games played from 1909 to 1922. Lalonde's C56 card is once again considered his true rookie card and features "Newsy" as a member of the Renfrew Creamery Kings where he was also a teammate of "Cyclone" Taylor.

Current PSA Population: Lalonde's C56 card has a similar scarcity level with PSA grading ~120 copies.  Good condition copies can be found for under $1000 if you look hard enough.  I think for Lalonde, Taylor and Ross these are really good opportunities for vintage hockey card collectors given the relative scarcity and the legacy of each player. 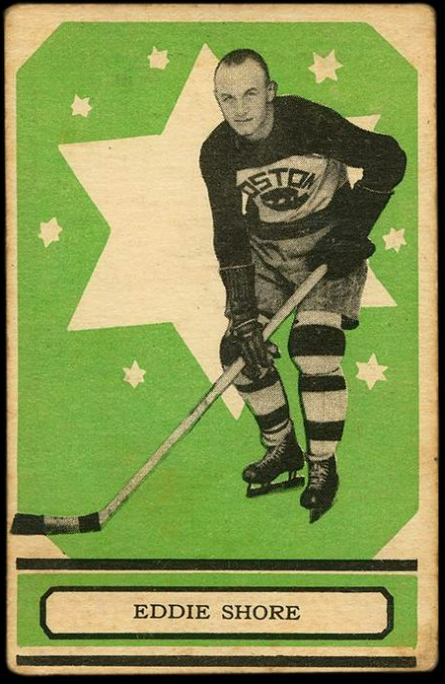 Why We Selected It For The Portfolio:  Eddie Shore is a somewhat overlooked hockey player--he is ranked at #10 on the list of greatest hockey players by the The Hockey News -- yet for most younger hockey fans, Shore isn't necessarily a household name.

Shore revolutionized the game, and is considered one of the best (and most feared!) defenseman of all time.  Shore's 1933 OPC card is his true rookie card, and one of my favorite vintage hockey sets.   In my opinion, one of the coolest designs of any hockey set in history.

Current PSA Population: PSA has graded less than 100 copies, so Shore's rookie card is easily one of my top investment picks in the Mid-Cap Portfolio.  A solid mix of iconic player, iconic set, and low population. 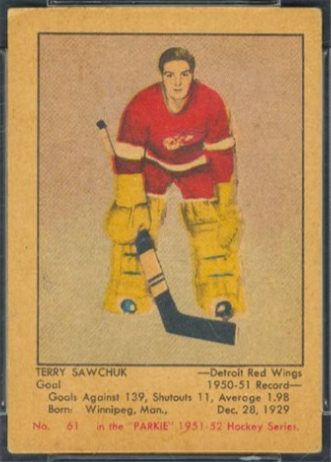 Why We Selected It For The Portfolio:  Ranked as the 9th best player of all time by The Hockey News, Sawchuk was an absolute warrior in goal.  He won the Calder Trophy, earned the Vezina Trophy in four different seasons, was a four-time Stanley Cup champ.  The 1951 Parkhurst set is full of key rookie cards, and Sawchuk is a big key rookie in the set.

Current PSA Population: The population is on the low end, with PSA having graded roughly 450 copies, still above that of the 33 OPC and early tobacco issues, but in my mind a pretty reasonable number. 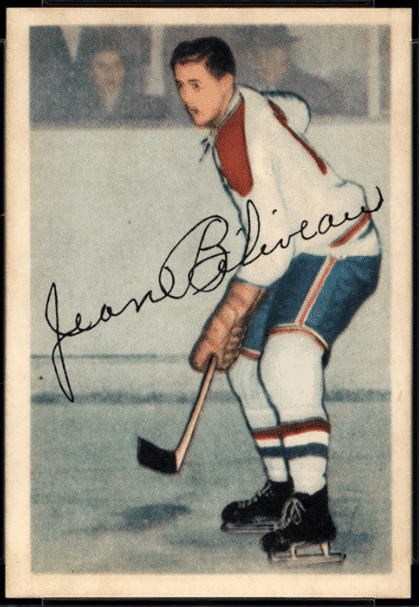 Why We Selected It For The Portfolio:  One of NHL’s all time greats, Jean Beliveau was an imposing scorer, posting 507 goals and 1219 points over 1125 games with the Montreal Canadiens.  Beliveau was part of an amazing 10 Stanley Cup-winning teams with the Canadiens and was the fourth player to score 500 goals.

I really like the 1953 Parkhurst cards which feature a full sized drawing of the player with a facsimile auto across the image.  Beliveau's rookie card is the most valuable card in the set.

Current PSA Population: PSA has graded roughly 520 copies, making it somewhat on the lighter end of the supply spectrum.  This is good for our investment portfolio! 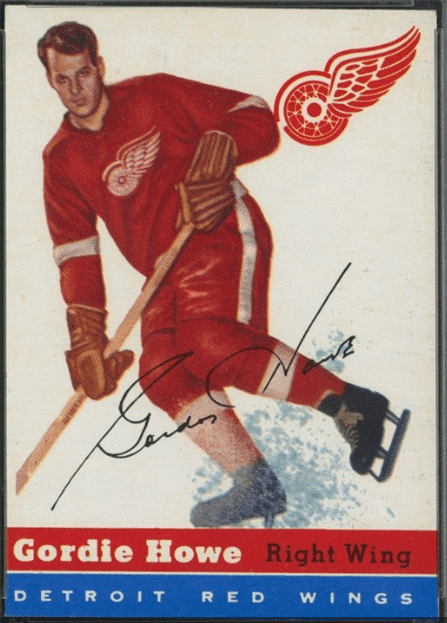 Why We Selected It For The Portfolio:  The 1954 Topps set marked the first hockey entry for the Topps Company and featured red, white and blue colors on the front of the card.   Thus, while not technically his rookie, this is a key card for Gordie Howe.  Probably one of my all time favorite cards, just a great combination of colors and illustrations.

Current PSA Population: Gordie Howe’s #8 card is the most valuable of the 60 card issue and has been graded by PSA roughly 650 times.

Good condition copies can usually be found on eBay for less than $600. 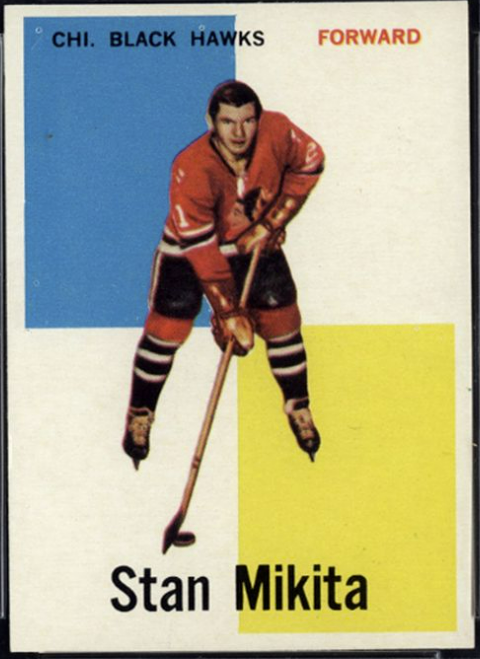 Why We Selected It For The Portfolio:  The leading scorer of all hockey players during the 1960's and the 17th best hockey player of all time per The Hockey News, Mikita was one of the best centers to play the game.  Mikita captured four Art Ross and two Hart Trophies along with amassing nine straight seasons of 76 points or more.  His 1960 Topps rookie card is somewhat overlooked in my mind, thus if we are looking for undervalued HOF rookies, this is a classic example.

Current PSA Population: The appeal also lies in the fact that PSA has graded less than 400 copies.  Don't tell anyone! 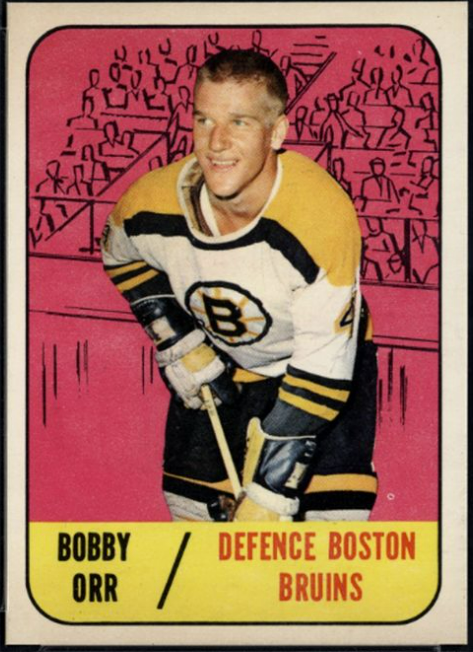 Why We Selected It For The Portfolio:  Bobby Orr is a Boston legend, one of the greatest to ever play the game, and one of the most revolutionary defenseman of all time.  His 1967 Topps second year card offers a way for collectors to get a much more affordable, yet in my mind excellent investment.  Maybe it's just me, but I also like the design of the 67 Topps set.

Current PSA Population: PSA has graded around 500 copies, making this, in my mind, a really underrated card that has a lot of potential for future appreciation, just based on the PSA supply alone. 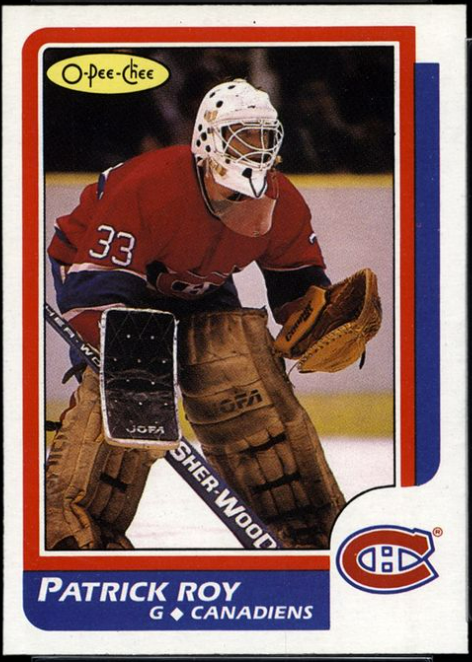 Why We Selected It For The Portfolio:  Another case where it's hard to own something where the supply is so large, but I had to make another exception for what I would consider to be in the top three of all time best goaltenders in the NHL.

Current PSA Population:  PSA has graded over 3000 copies, which makes me wince a little bit, but this is the reason I opted for a MINT condition copy--PSA has  graded only about 800 at MINT or better...so, if you can, try to opt for the highest grade possible.