In this piece, I’ll look at the two key rookie cards for Lemieux, examining the scarcity, current values, and long-term investment potential.

Mario Lemieux As A Player

Mario Lemieux was born on October 5th, 1965 in Montreal, Canada.

He became one of the greatest hockey players of all time.

His intense dedication to the game and hard work ethic had Lemieux positioned for greatness early on. 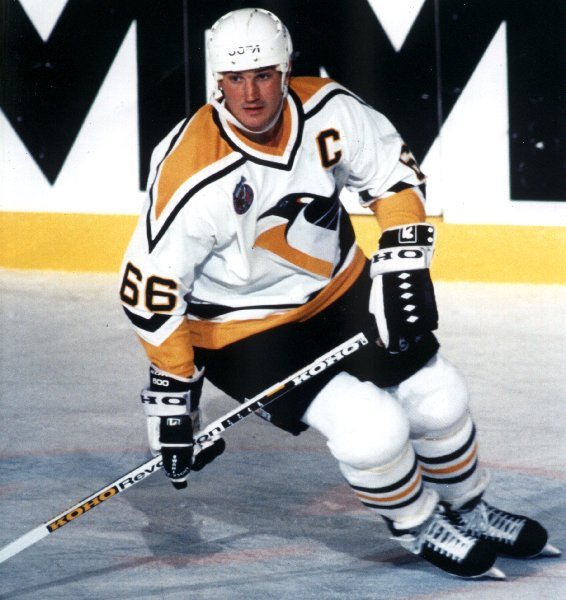 Lemieux would spend countless hours after school playing pick up hockey until the sun set. His family even bringing snow into the house so that he and his brothers could practice their skills indoors.

"According to local lore, when the snow got too deep to play hockey outside. Madame Lemieux transported shovels of snow into the house. She threw the snow on the carpet and pounded it down to a smooth surface that glistened like ice. "

Mario played junior hockey with the Laval Voisins of the Quebec Major Junior Hockey League from 1981 to 1984 where he broke nearly every single junior hockey record imaginable.

In his last season with Laval, he tallied an unbelievable total of 282 points, with 133 goals and 149 assists in only 70 games!

The following year the Pittsburgh Penguins drafted the 6'4", 230 pound Lemieux with their first pick overall in 1984, which turned out to be a pretty impressive draft class, including Patrick Roy, Brett Hull and Luc Robitaille.

At the time of the 1984 Draft, Lemieux was the clear cut consensus #1 pick, however some critiqued his lack of mobility and bad shape (Lemieux was not shy when it came to fast food).

Those fears would go unfounded, as Lemieux soon became the savior for Pittsburgh they expected him to be, practically saving a near bankrupt team from its own demise.

"At the age of 6, I knew he'd play professionally. He was playing mite hockey with boys who were 9 or 10 years old and he was already the leader of the team.”

Lemieux did have a major scare in 1992, when he was diagnosed with Hodgkin lymphoma, a dangerous, but treatable cancer, considering that it was found early.

Due to radiation treatments, Lemieux missed two months of the 1992-93 season. Following back surgery the next year, Lemieux announced a leave of absence from hockey, seeing him miss a significant portion of the 93-94 season, and the entire 94-95 season.

Thankfully, Lemieux's cancer was in remission and he returned to play in 1995-96, achieving his third best career point total for the season, marking one of the best comebacks in the history of sports.

Lemieux retired at the age of 31 in 1997 and was inducted into Hockey Hall of Fame that same year. He would end up buying the Pittsburgh Penguins in 1999, later returning to the ice from 2000-2006.

The cards feature white borders, with a full color photo of Lemieux.

The 1985 Topps and OPC hockey cards used different background colors to color coordinate with the team colors for the player’s name.

The backs of the Lemieux cards are where there is a noticeable difference. As is common throughout all O-Pee-Chee sets, the OPC Lemieux back has a brighter card stock as compared to the Topps card, which is easily noticeable if comparing the backs of the cards. 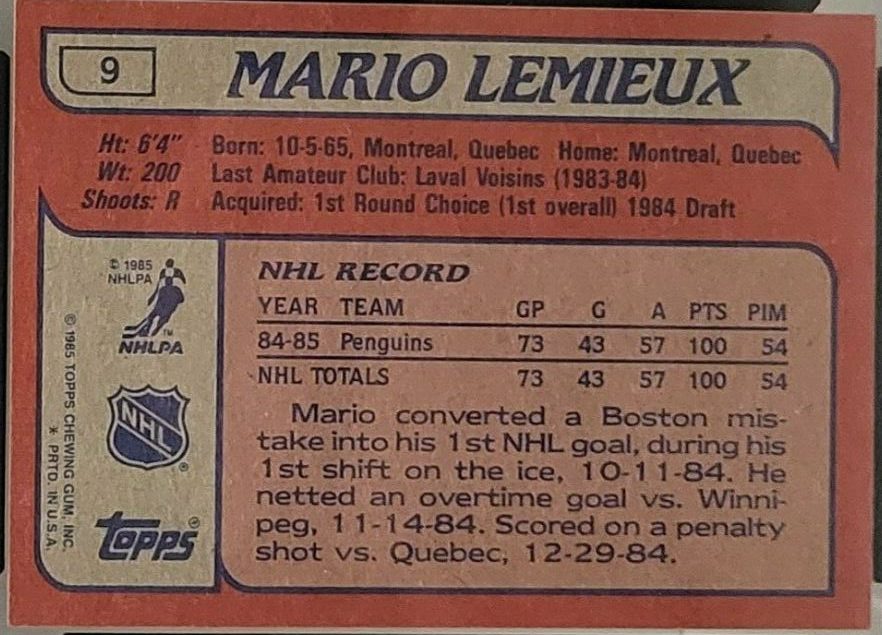 Back of a Topps Lemieux rookie card 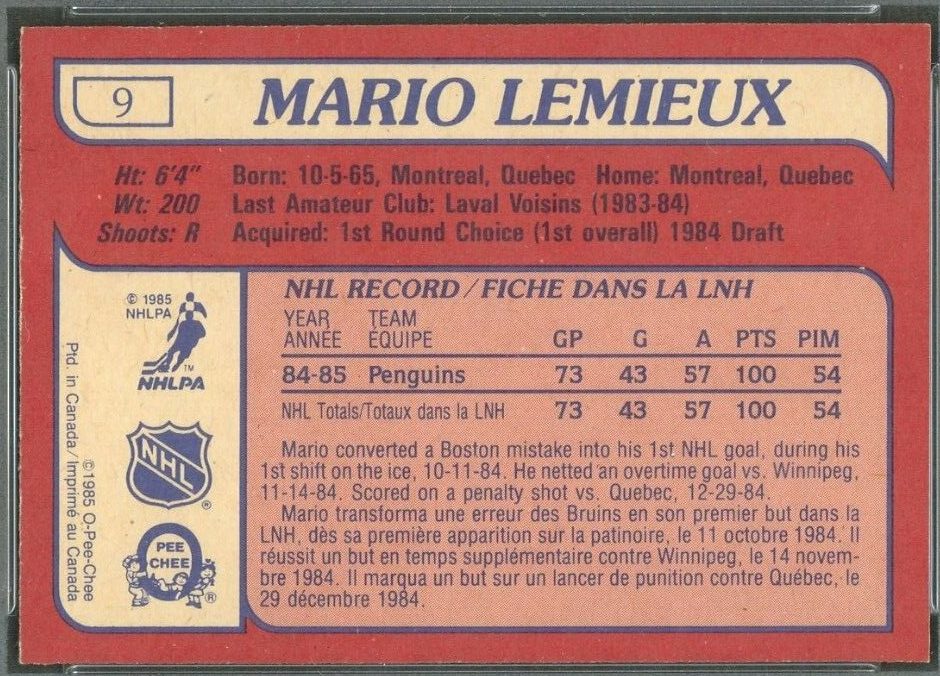 Back of an OPC Lemieux rookie card

The OPC Lemieux card back also has both an English and French player summary,  along with other French abbreviations.

Based on recent sales data from PSA, Lemieux's O-Pee-Chee rookie card sells for an average 43% premium versus the Topps rookie card. I do not think this premium is warranted, given that the graded population of each card is nearly identical (see next section on population reports of Lemieux's rookie card).

If you're wondering whether or not to get your Mario Lemieux rookie card graded, I advise you to examine the potential grade of the card and use our sports card grading calculator to see if its worth grading.

In many cases, it might not be worth grading unless the condition is super sharp. Notably, even the value increase of a graded Topps Lemieux in EX-MT condition would be nearly entirely eaten up by grading costs.

Remember that getting a PSA 10 on any card is nearly impossible.

Most believe that O-Pee-Chee cards, in general, have a lower distribution than a sister Topps set, however, I'm not sure that's always true, especially with hockey sets, where there is typically more fan interest in Canada as compared to the US.

And the population stats from PSA tell us that both Lemieux's Topps and O-Pee-Chee 1985 rookie cards has been graded at nearly an identical amount. PSA has graded roughly 4700 O-Pee-Chee Lemieux Rookie cards, and about 4800 Topps Lemieux rookie cards.

I think most collectors are surprised by this, especially given that the O-Pee-Chee Lemieux trades at a premium.

On the higher grades, specifically, from PSA 8 to PSA 10, the Lemieux OPC rookie card is a bit rarer, but from PSA 7 and below, the reverse is true.

For collectors looking to invest in a Lemieux, it of course, starts with affordability, but I think the PSA 9 Topps (Mint) Lemieux is the best investment at the moment, with average prices running for less than $1000, roughly 1/3 the price of the PSA OPC Lemieux.

There are 954 PSA 9 Topps Lemieux's, so it's not a huge, huge population. I think this one should do very well over the long term.

Overall Investment Potential: 8.5 out of 10