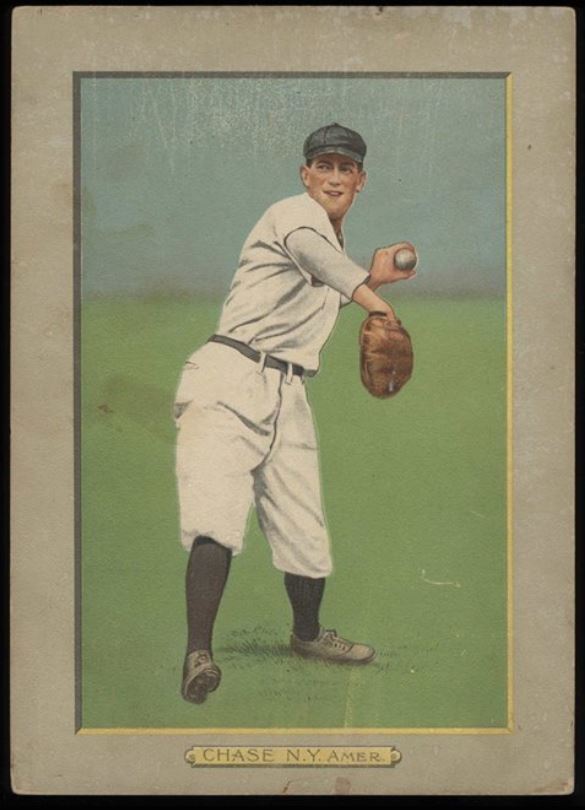 I had always been vaguely familiar with the Turkey Red (T3) Tobacco Cabinet cards, but it wasn’t until I had one in my hands that I truly appreciated their beauty.

These over-sized ‘cabinet’ cards feature beautiful full length lithography and were issued as a premium for customers of Turkey Red cigarettes from 1910 through 1911.

The 100 card set is chock full of Hall of Famers, including Ty Cobb, Christy Mathewson, Cy Young and Nap Lajoie.

What I found to be the most appealing feature of the set is the fact that the images (for the most part) are identical to their T206 counterparts, yet in a beautiful over-sized lithograph.

The cards are actually scarcer than the T206 and T205 cards, and in my opinion undervalued comparatively.

In this piece, we’ll take a deep dive into the T3 Turkey Reds set, examining the details and history of the cards, along with ways to collect and distinguish from counterfeits on the market.

History Of The Set

The Turkey Red cabinet cards were provided as a premium offer to smokers of Turkey Red cigarettes.  Inside of each pack of cigarettes was a coupon; if you were to collect ten of these coupons, you could exchange it for one Turkey Red cabinet card.  Customers were able to make a choice for the card they wanted.  Note that the coupons were also included in packs of Old Mill and Fez cigarettes, but it would take 25 of those coupons to get a card.  The coupons themselves still hold a good amount of value and can range from between $100 to $400 depending on condition.

Here’s a sample of a Turkey Red coupon which is offering up a ‘handsome lithographed picture’ to its customers. 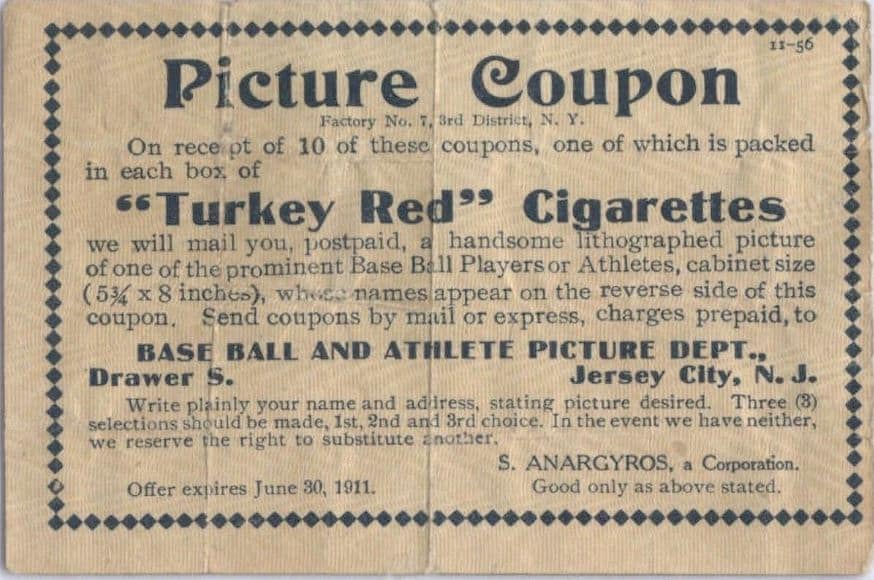 Note the old Turkey Red cigarette packs are a thing of beauty and are still quite collectible in their own right.  Here’s an example of a pack: 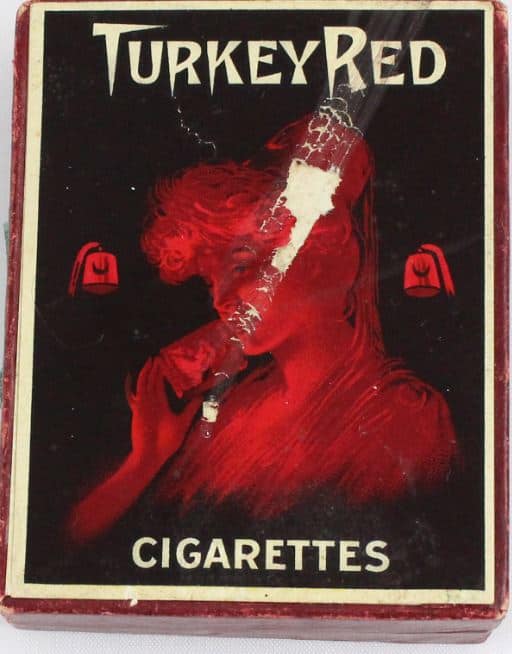 As for the cards themselves, I think ‘handsome lithograph’ is a bit of an understatement; I truly believe these cards are one of the most beautiful in the hobby.  I first became enamored with the beautiful colors and lithography of the T206 “White Borders’ set.  But just imagine those T206 cards in an over-sized (5 3/4″ x 8”) format with a full-size version of the images utilized from the T206 set; set on a thick card stock with beautiful tan borders in a sort of picture like frame. 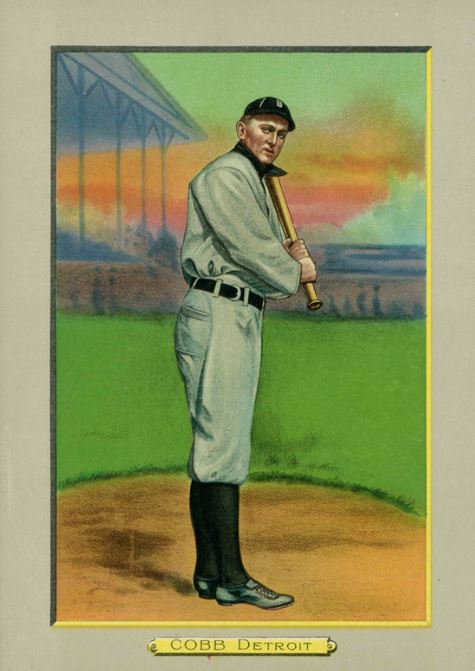 The T3 cabinet cards were issued in two different series, with the first 50 cards (numbered 1 through 50) including some of the biggest stars of the day, including Cy Young and Ty Cobb.  A second 50 card series (77 through 126) was later produced, albeit with a little bit less star power than the first series.  There was also a 25 card boxing issue available to Turkey Red smokers (identified as a separate T9 set) and is numbered in between the two baseball series (numbered 51 through 76).

There are some minor front variations but none really as popular as the ones from the T206 set such as the ‘Magie’ or ‘Doyle’ cards.   Thus most collectors tend to focus on either the full 100 card checklist, the 25 HOF cards or some combination including back variations.

Here is a full list of the Hall of Famers from the set:

T3 Back Variations and Back Scarcity

T3 Turkey Reds were issued with five different back variations.  Note the T3TurkeyRed.com site is an amazing resource and has a TON of info on the backs and more.  Here are photos of the five backs with a description underneath each photo: 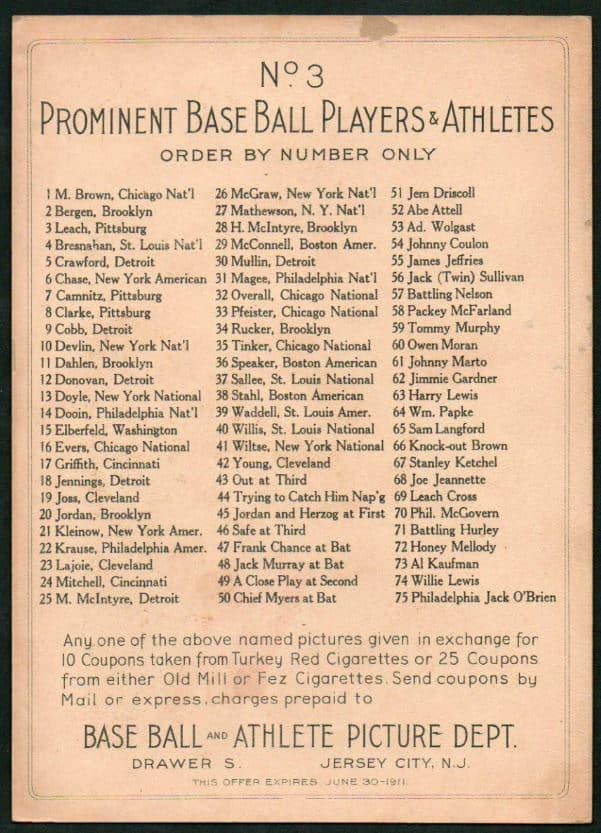 The first back showing cards 1 through 75.  Note there are actually 51 baseball players available with this back since there was a slight variation/correction in card #28-McIntyre (which has two variations in the set). 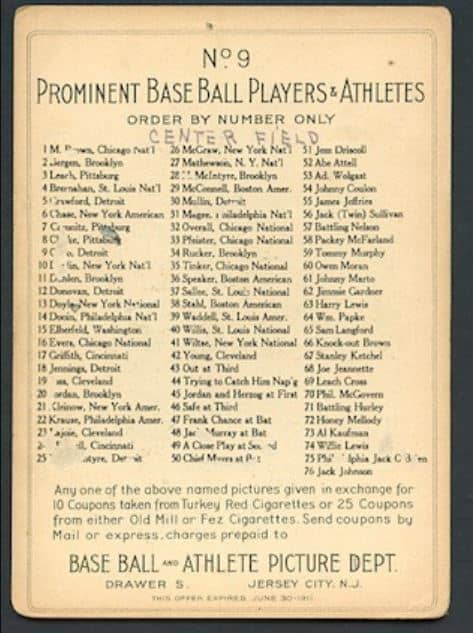 Same as the first back, except for the fact that this one includes #76, boxing great Jack Johnson. 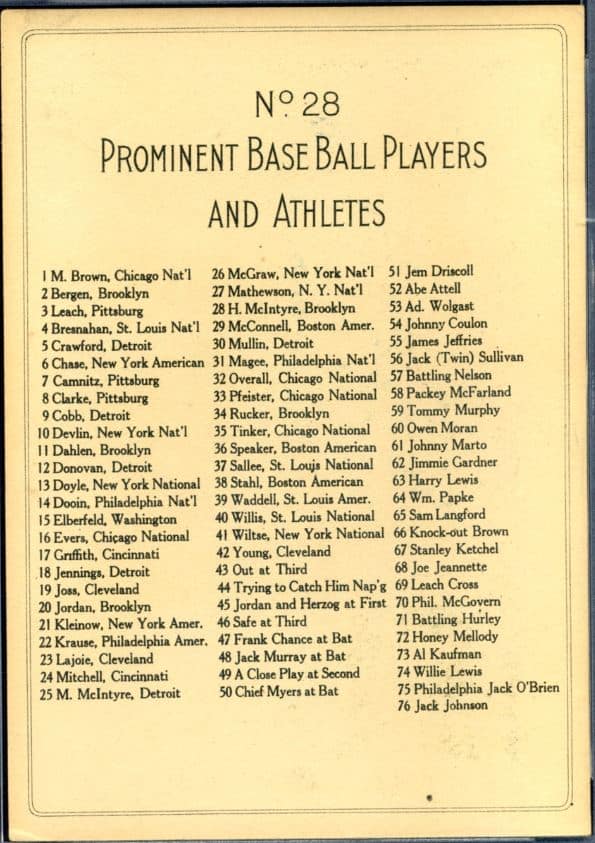 Known as the 'No Ad' back since there is no Turkey Red promotion as the bottom of the card.  Craig from T3TurkeyReds believes this was due to the fact that the second series was upcoming and they wanted to halt redemptions for the first series cards. 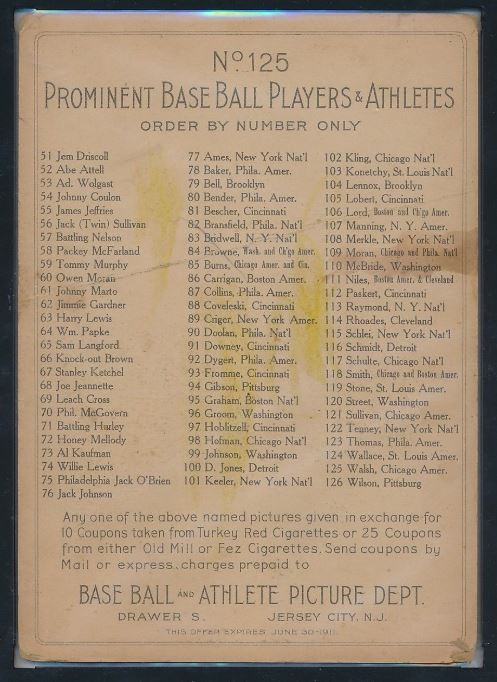 The back for the second series cards along with the boxing issue. 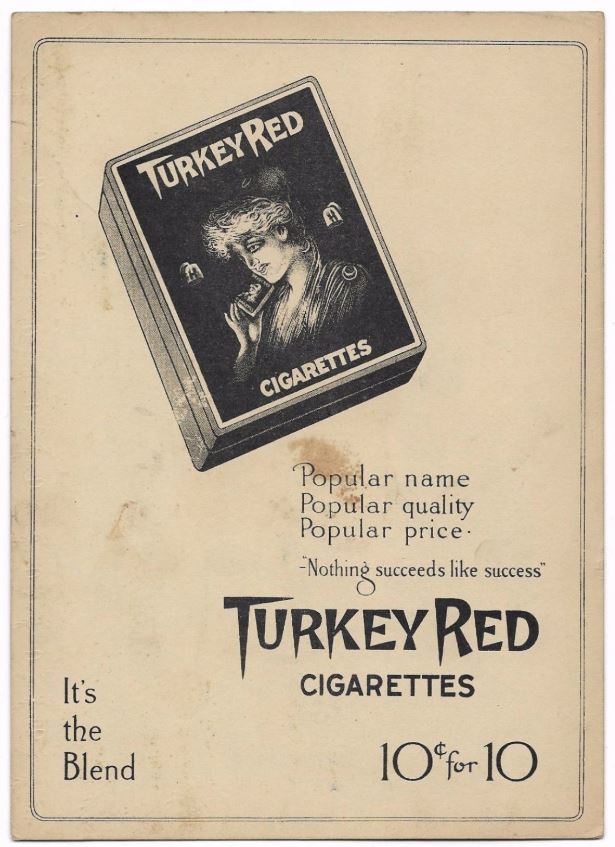 Known as the 'Turkey Red Ad' back this was a second series back that was likely also issued towards the end of the second series to limit any more redemptions.

Availability Of The Cards

T3 cards in general are scarcer than the other American Tobacco issues of the time, notably the T205 and T206 sets.   PSA has graded on average, roughly 450 of each subject in the T206 set, whereas they have graded on average around 200 of each subject in the T205 set.  As for the T3 cards, PSA has only an average of 51 cards per player, making the set much scarcer than the T205 and T206 cards.

We have also included the SGC population in the chart below, but I must note that the SGC stats are ROUGH estimates, as SGC’s population database is an unmitigated disaster.  Cards are cataloged with different groupings etc.   Whatever the case, I think it is a fair assessment that the T3 cards are certainly more scarce in nature versus the two other sets. 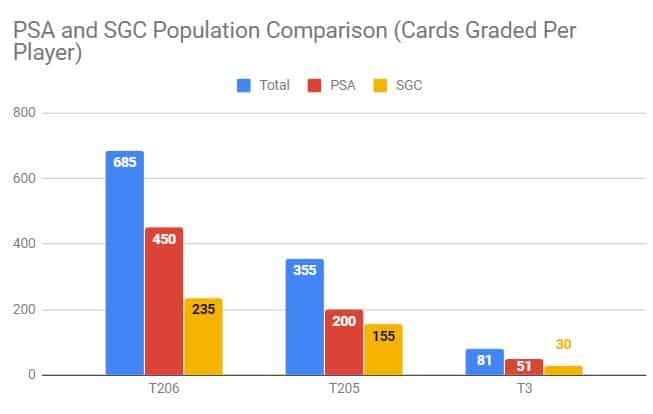 How To Spot A Fake T3

First thing to look out for are the Mike Wheat reproductions which are advertised as reprints, but look just like the real thing.  The simple tell on there is a starburst design at each bottom corner on the reverse.  There is nothing at the corners of the real thing as shown in the second picture. 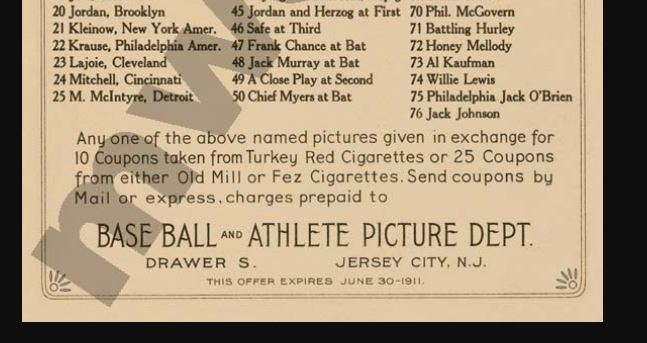 Also as T3 expert Jeff Prizner notes over at the Net54 forums, look for an ‘orange peel’ type of effect on the front of the cards with natural toning on the back.  Of course, buying graded can typically help avoid some of the counterfeits or reproductions.

The biggies in the set (starting with the most valuable) are Ty Cobb, Walter Johnson, Cy Young, Christy Mathewson, Tris Speaker and Nap Lajoie.

Here’s a comparison in cost for a PSA 2 for the T3’s versus the T206 cards (note this population is only for PSA):

Overall, in each instance the T3 cards are worth more money.  But given the surge in T206 cards of late, the difference in many cases isn’t all that great.  Sure the Cobb T3 is nearly worth twice as much but it’s also much scarcer, almost 1/10th as rare as Cobb’s T206 card.

Thus, I say that given the relative scarcity along with the pure overall beauty of the T3 cards, that the set is undervalued versus the T206 cards.  Maybe we could argue that the T206 cards are overvalued and that the T3’s are more appropriately valued in a more normalized environment?  Sure I could buy that logic as well, but if we’re going by what today’s current card market looks like, versus what the actual supply looks like for the T3’s, I really like the cards as a long term investment for collectors.

One sticking point with the T3’s is the costs to actually grade the cards.   I think this could be a potential factor in the low overall supply, but hard to estimate by how much this might be affecting the overall population.   With PSA, the cost to grade a cabinet card is a lot higher.  Here’s the language from their site:

Any item requiring the Jumbo holder will be subject to an additional $30 fee……. T3 cards must be submitted under Supersized holder size and Super Express Service Level or higher. Failure to separate Type of Submission, Holder Size, and Service Levels, as noted, will result in additional fees and cause significant delays in processing your order.

So at PSA, a Supersized holder costs $10 and Super Express Service Level costs $200, thus for a T3 card it’s $210 dollars just to get it graded.  As one fellow T3 collector told me ‘It is like PSA decided they never want to grade another one so they would just make them cost too much for anyone to send in’.  Yep sure feels that way.  Thus there is certainly an inherent value for the actual grading costs when you buy a PSA graded T3 on the open marketplace.

Now as for SGC, it’s much more cost effective than PSA’s grading costs for T3’s, but still will cost you around $65.  For a full schedule of SGC’s grading costs go here.

Most Active T3 Cards on eBay