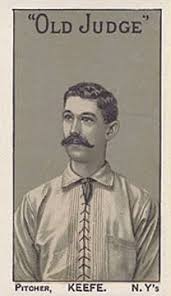 As we discussed in our first article about the history of baseball cards, there is some debate about what cards are actually the first true baseball card set.

Some believe that early “cabinet” cards from the 19th century deserve the honor, but as we noted, these cards don’t meet the true definition of a “baseball card”.

In most collecting circles the tobacco cards of 1886 included in packs of Old Judge cigarettes are indeed the first true baseball cards.

The set (cataloged as set N167 by J.R. Burdick in the historic American Card Catalog) is small in stature, as only twelve cards were created and feature cards from only the New York Giants.

Of the twelve cards, six are hall of famers, thus for a set with such diminutive size, it really packs a punch.

Finding the N167 cards is kind of like finding a needle in a haystick, thus the cards hold tremendous value.  Let’s take a closer look at the set!

If you’re just getting started in the hobby and you aren’t the CEO of a Fortune 500 company, the 1886 Old Judge set is probably going to be unattainable.   Issued in Old Judge cigarette packs in 1886, this twelve card set is among the rarest of all pre-war cards.

The late James Blumenthal, a vintage collector that was well revered by folks over at the Net54 Baseball Forums was able to piece together a full set of the N167 cards, a feat that might be equated to climbing Mt Everest while blindfolded.

As for recent sales, a PSA 3 of HOFer Roger Connor sold for close to $30K at auction in early 2018.  We also found the sale of a SGC 45 Buck Ewing card in 2016, which sold for $51,000.  Given the scarcity of the cards, I’d say that was a bargain purchase.  That card would easily reach well into the six figures in a sale today.

Given that the N167 set is widely regarded as the first true baseball card set, the high popularity for the set is not a major surprise.  Given the scarcity however, completing the entire set might be nearly unattainable for even the wealthiest of collectors.

The set features twelve members of the New York Giants, while six of the twelve players are members of the Baseball Hall of Fame.  Goodwin & Company, the manufacturer and owner of Old Judge cigarettes was based in Manhattan, hence the reason for only Giants players being featured in the set.

In 1886, Goodwin and Co also issued similar cards for actresses, actors and boxers, but these cards don’t carry the same sort of demand as the baseball cards in the set.   Below listed is a card of boxer Jack McAuliffe which sold at REA auctions back in 2009.  (image courtesy REA) 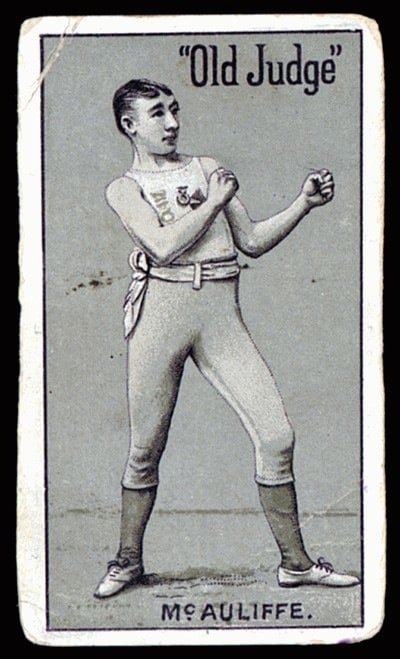 One of the biggest problems with this set, despite the presence of six hall of fame players, is that the names aren’t as well known and regarded as some of the other players of the time, such as Cy Young, Honus Wagner, Walter Johnson and Christy Mathewson.  Thus, there might be a hidden lack of interest because of this.

Still, we have to remember that compared to many of the other sets of the day, that this one is one of the rarest.  And again, add on the fact that this is the first true baseball card set (kind of getting tired of saying that, but bears repeating!), I think these cards deserve every single penny that they would garner at auction.

So, given all the positives, why not undervalued?  Well, these cards continued to gain in popularity and collectors always want to get their hands on something that can be considered a significant type of “milestone” set.   Add on the rarity of the cards, and we will likely see new pricing records broken at any upcoming auctions. 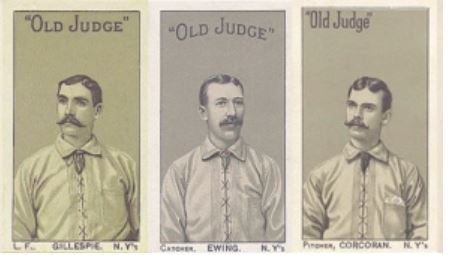 If you’re one of the handful of collectors hanging on to a Giants cards from the N167 set, I believe that time will serve you well from an investment standpoint.  Since the N167 cards are the first true baseball cards ever issued, that says a lot, especially in the eyes of a hardcore collector. Add in the extreme scarcity of the cards, and this should make for an excellent long term investment.

It’s hard to get a true estimate of value on the N167 cards.  Commons in VG+ condition should sell for $20K and more, while the HOF players in similar condition would likely net six figures.  As noted previously, we were able to identify a few recent sales at auction, but I would expect any sales in this market to likely eclipse previous records.

If you are a deep pocketed collector, I think the N167 set would be a wise investment, assuming you can find any for sale!  It’s doubtful that you would find any at a place like eBay, but keep your eyes peeled at some of the auction houses and you might just get lucky.

Here’s a list of the best auction houses for vintage baseball cards.

If you come across any for sale, feel free to reach out to us, and we’d be happy to be of assistance.

Baseball Cards Of The Players That Shaped Toni Stone’s Career