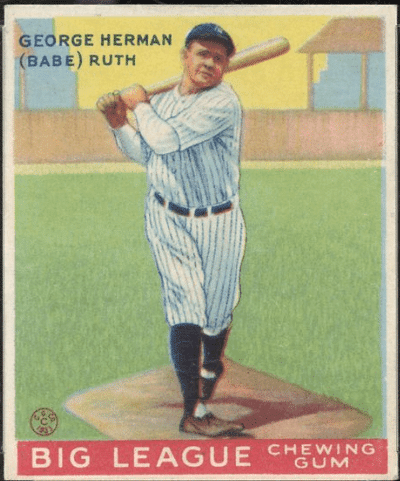 Babe Ruth baseball cards garner the most demand of any other single player in the history of the game.

Add on the fact that he played for the Yankees, he cursed an entire franchise (the Red Sox of course), and had one of the most memorable personalities in baseball, and it’s no surprise that collector demand for Babe Ruth’s baseball cards remains very high.

But, you say that Ruth has cards that are (gulp) undervalued??

Part of our mission at All Vintage Cards is to help collectors identify baseball cards that look mis-priced in the marketplace. We utilize our research on Availability, Collector Demand, and Current Valuation to determine whether a card looks Fairly Valued or potentially Undervalued (or even Overvalued).

**quick note–while it could be argued that some of Ruth’s most expensive cards are still unbelievable values (and they probably are), this list was designed to provide collectors with a few ideas for less than $2000.  Enjoy!

Strip cards filled a void in the hobby during the 1920s as tobacco companies had shut down production.  This 1920 W516 Strip Card of Babe Ruth is a great way to get an early card of the ‘Babe’ at an affordable price.

This W516 set was created by International Feature Service and distributed in grocery stores and other merchants of the day.  The cards were separated by dotted lines and made of a lower grade card stock than later baseball cards. 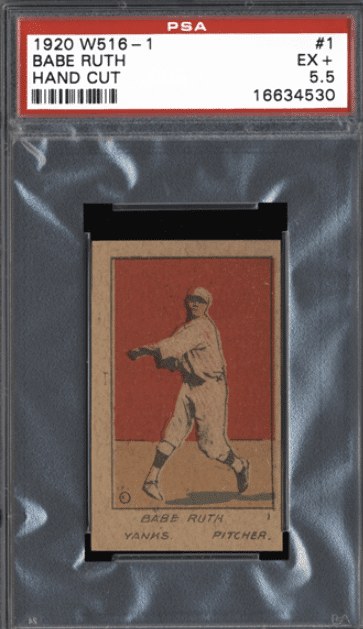 Thus because these cards had to be cut from a strip, and because of the lower grade card stock, finding strip cards such as the W516 in good condition can be quite a challenge.

As shown in the PSA pop report below, most cards have been graded ‘Authentic’ and very few attain an actual number ranking from PSA.

Still, we like the 1920 W516 Babe Ruth card as an option for newer Ruth card collectors, one that due to its age, scarcity, and pure overall Ruth demand, should continue to climb in value for the next several years.

These cards were produced by the Exhibit Supply Co out of Chicago. This set marks the first Exhibits set, as the company went on to produce similar type larger more ‘postcard’ looking cards for many more years.

The cards were sold out of vending machines in arcades and amusement parks and featured not only ballplayers but other stars of the day including actors and actresses.

The Exhibit cards have become more popular in recent years, as for vintage collectors, the cards offer a more affordable way to purchase cards of star players during their playing days.

The Ruth card from the set has become quite collectible and has increased in value tremendously in recent years.  We still think it offers a good investment for collectors, but this one would be at the top of the price range among the group listed here.

Low-grade Ruth Exhibit cards for the set are valued at between $1000 to $2000 by PSA, but it would likely be hard to find one for under $2000, even in poor condition.  Keep your eyes peeled, however, and you might get the find of a lifetime. 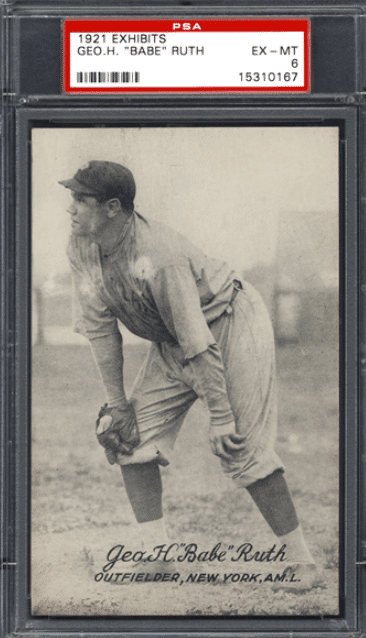 Yep, it’s another strip card set (shh.. it’s where we are finding the value!), and this one has two cards of Babe Ruth in the set.  I find the look of these cards more attractive than the 1920 set, as the cards feature color illustrations of the players with blank backs.

This differs from the 1 series in that the fronts have none of this writing and are a bit smaller than the W515-2 series. 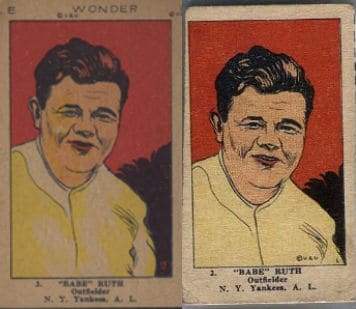 A perfect version of the #47 card was recently featured on the show Pawn Stars, in which Rick from Pawn Stars offered up $8,000 for the card, which in my mind, was quite the low ball offer.  Lower-grade versions of the card can be found on eBay and other auction sites for less than $1000.

One of the oddities of all Babe Ruth cards, the 1929 Shonen Club Ruth is one of his most underappreciated cards and a favorite of vintage collectors. Released during Ruth’s playing career, the card is technically a postcard and was provided in a children’s magazine called ‘Shonen Club’ in Japan.

Released as a 40 card set, the Babe Ruth card is the only baseball card in the set, as the remainder of the cards features landscapes, animals, and other photographs.

The front of the card features Japanese writing and has been translated by the folks at Old Cardboard:

“This is the moment Babe Ruth, known throughout the world as the Homerun King, swings with all his might and hits the ball. The ball flew far past the outfield and it appears to be a home run. The catcher and umpire freeze in awe as they watch and as Babe looks pleased. The spectators in the stands are also breathless as they watch.”

Old Cardboard claims that the Shonen Club Ruth is ‘scarce but not exceedingly rare’. It’s also hard to get a read from PSA as to circulation as they have mixed up the year and title of the card over the years.

While the card isn’t incredibly easy to find, copies do sometimes come up for sale and can often be found for under $1000 in good condition. 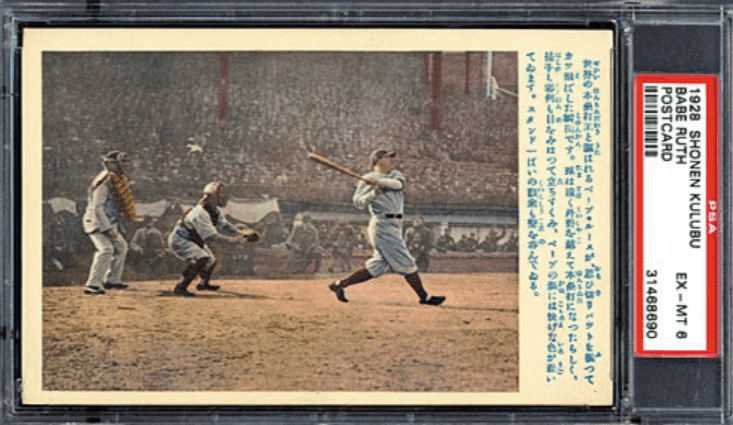 Another foreign and little-known tobacco issue is the 1929 Churchman Cigarettes Ruth card which was issued by Imperial Tobacco in Britain and Ireland in the late 1920s.

The card actually features the same image from the Shonen Ruth card and has no labeling of Babe Ruth’s name on the card. The set of 25 cards which was formally called the “Sports and Games in Many Lands” set features a collection of images picturing sports and games that were played in the country.

There are a few different variations of this card that were released in later years. The British American Tobacco version released in 1930 is the same exact card, yet without the ‘Churchman’s Cigarette’ label or any text for that matter at the top right of the card. In 1935, a similar Edwards, Ringer, and Bigg version was released.

The Churchman’s card is the most widely available of the three, but for the most part, the cards tend to fetch the same price at auction. Cards in excellent condition can be found for under $500, an excellent investment for Ruth collectors. 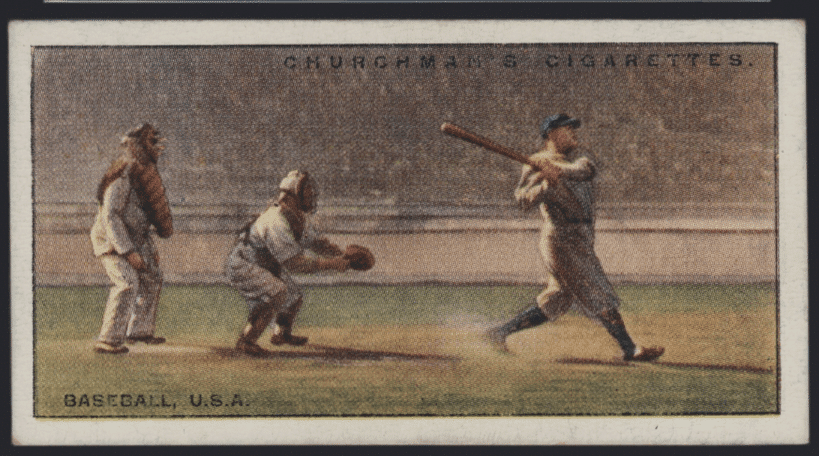 This strip card is a bit of an anomaly compared to the strip cards that came before it, in that the size was much larger (3 inches by 4 inches) although there are mini versions of each card in the set.

PSA has graded 58 copies of #4 and 54 versions of #20, thus the cards are fairly uncommon in nature.

Even still, the card in VG condition can be found for under $2000, which seems like a good investment considering that there are only around 100 PSA graded copies in existence. 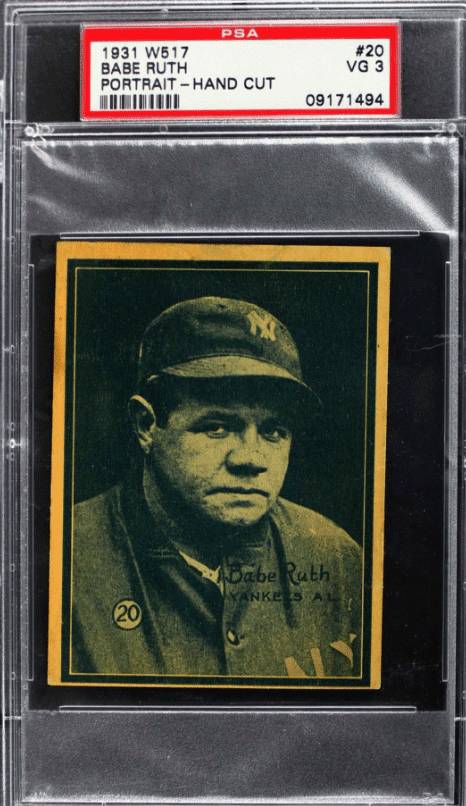 Produced in Germany by Sanella Margarine, these cards were issued shortly after the 1932 Berlin Olympics.  The cards feature players from various sports, yet only two baseball players–Babe Ruth and an unknown Japanese baseball player.

From a pricing standpoint, the Astra back (Type 3) goes for close to $1000 in good condition, whereas the other versions with Sanella on the back can be found for under $500. 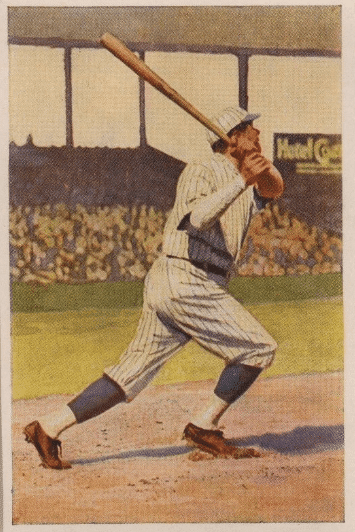 While the ’33 Goudey Ruth gets all the love the 1932 US Caramel Babe Ruth is a relatively undervalued card, given that the US Caramel card is both older and scarcer than the Goudey Ruth.

Here are some comparisons from PSA

This is the population report on the US Caramel Card 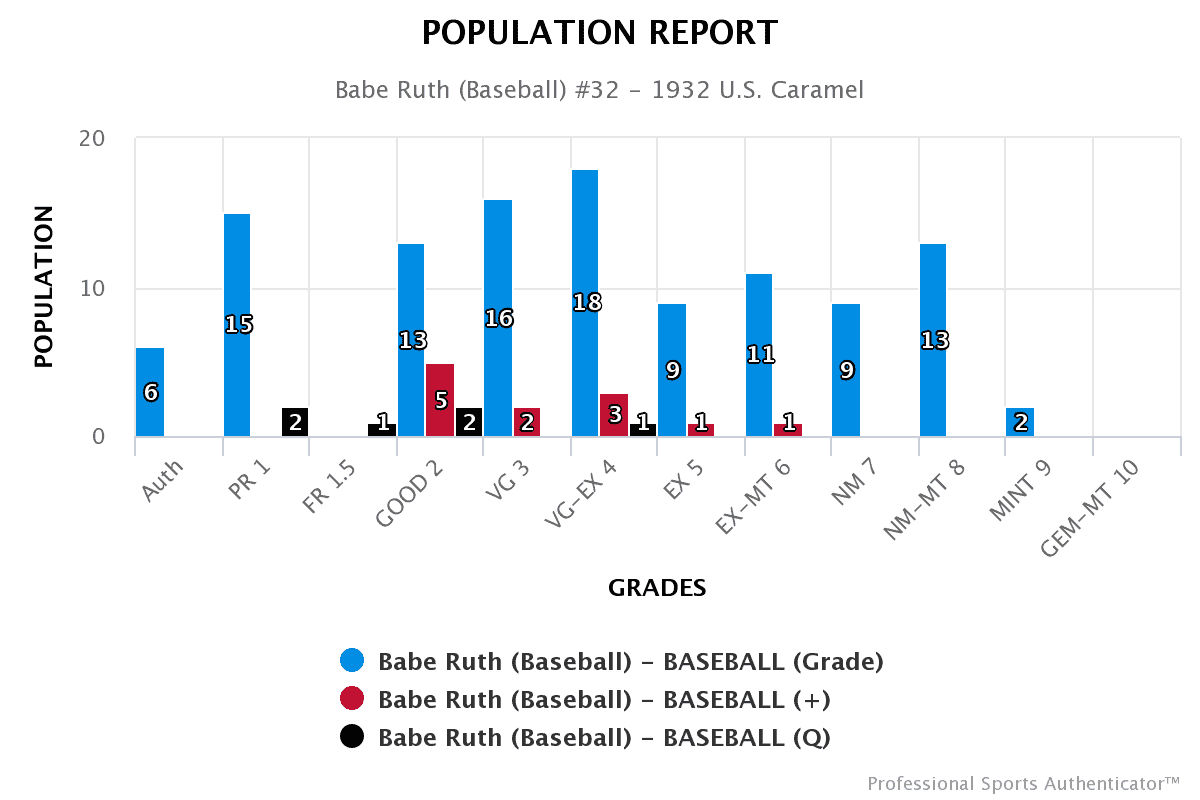 And then the ’33 Goudey population report below from PSA–notice any difference? 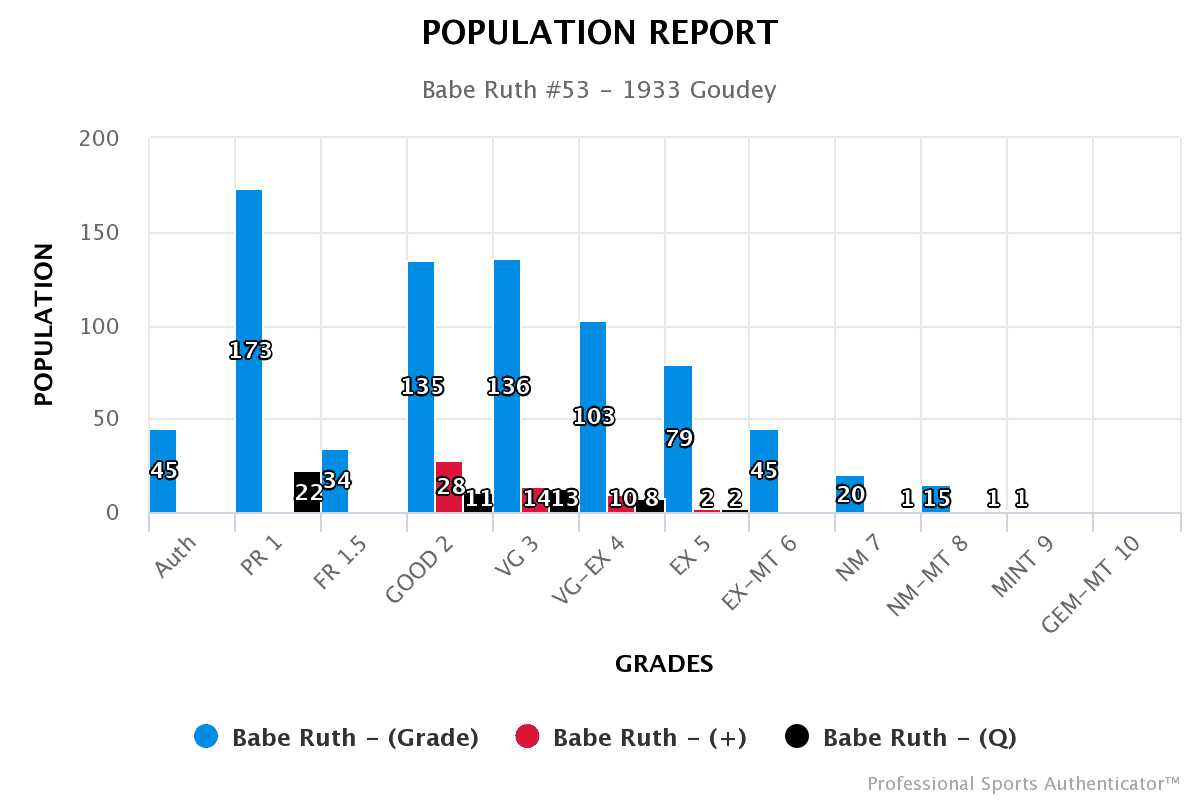 I think the US Caramel card is one of the better Ruth cards for investors to consider because of this scarcity discrepancy between it and the Goudey card. 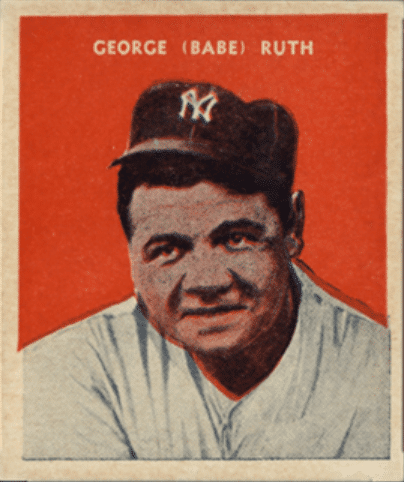 Issued by Goudey Gum and known as the ‘Canadian Goudey’ the World Wide Gum set was issued in Canada and is a near replica of the 1933 Goudey set.  While the ’33 Goudey set featured four different Ruth cards, this set only includes one (#80) which is an essential copy of #144 from the Goudey set.

In examining the graded copies of the two cards, the ’33 Goudey #144 has seen over 1000 versions graded by PSA, while the World Wide Gum Card #80 has only been graded 67 times.  Thus at least from a PSA standpoint, the Canadian card is much rarer!

But in examining pricing for the two cards, the World Wide Gum card is valued at about a third the value of the Goudey card.  I expect that this gap will narrow over time as collectors start to pick up on the scarcity of the card.

Still, a Good version of the Ruth World Wide Gum card will probably set you back close to $2000, and only increase from there.

With the ’33 and Ruth Goudey’s slightly out of reach, the 1935 Goudey Babe Ruth offers a slightly more affordable option that should continue to grow in value over time.

The 1935 Goudey set represented a shift in style for Goudey, as the cards feature four players on the front of the card.  The Ruth card actually uses the image of Ruth from the 1933 Goudey set and is his last official baseball card as a member of the Boston Braves.

The card features three of Ruth’s teammates from the 1935 season – with HOFer Rabbitt Maranville one of the players.  The 1935 season was not a very memorable one for Ruth, as he was relegated to more of player-coach and only played in 28 games.

Still, the card is one of the more affordable vintage Babe Ruth cards from during his playing days.

PSA has graded 207 versions of the Ruth Goudey, thus while not scarce, the limited amount of graded cards makes for an excellent long-term investment.

Cards in VG condition can often be found for $1000, but improvements in grades might cost you as this card has become quite popular among vintage collectors. 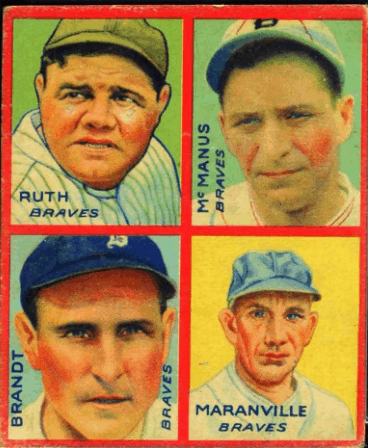