Could An Unopened Tobacco Pack Contain A T206 Card?

I recently came across a Facebook post with a seller trying to sell an unopened Sweet Caporal cigarette pack.

The pack looked to be in relatively nice shape and the seller was asking for $1800, which to me seemed somewhat reasonable given that a T206 card might be nestled inside.

I hadn’t really explored T206 unopened packs before and the listing triggered me to do some research into the topic.

Could this unopened pack hold a T206 card?  Imagine if it had a Honus Wagner, or even a near mint Cobb portrait.  The possibilities seemed nearly worth the risk at that point.

However after researching old tobacco packs and examining some of the finer details on the pack, it was quite clear that there was zero possibility this pack held any cards from the T206 set.

In this piece, I’m going to walk readers through the steps one needs to take in order to assess whether an old tobacco pack might contain a card or not.

Please let me know if you have any packs that might be of interest.  Feel free to email me at chris@allvintagecards.com

Baseball cards were first inserted in packs of Old Judge cigarettes in 1886 and became a way for cigarette companies to get smokers hooked on their products. Card issuance inside of tobacco packs was quite common from the late 1800's up until around 1914.  It was around this time when most tobacco card production was grounded; mostly due to a lack of availability of materials because of America's involvement with World War 1.

From 1909 to 1911, the American Tobacco Company issued cards inside the packs of their sixteen different tobacco brands.  Jon Canfield, a T206 pack expert who also manages the Baseball & Tobacco website, says that nearly all of the packs with a card were issued in 10-count "slide and shell" cigarette boxes, similar to the unopened Sweet Caporal pack shown below: 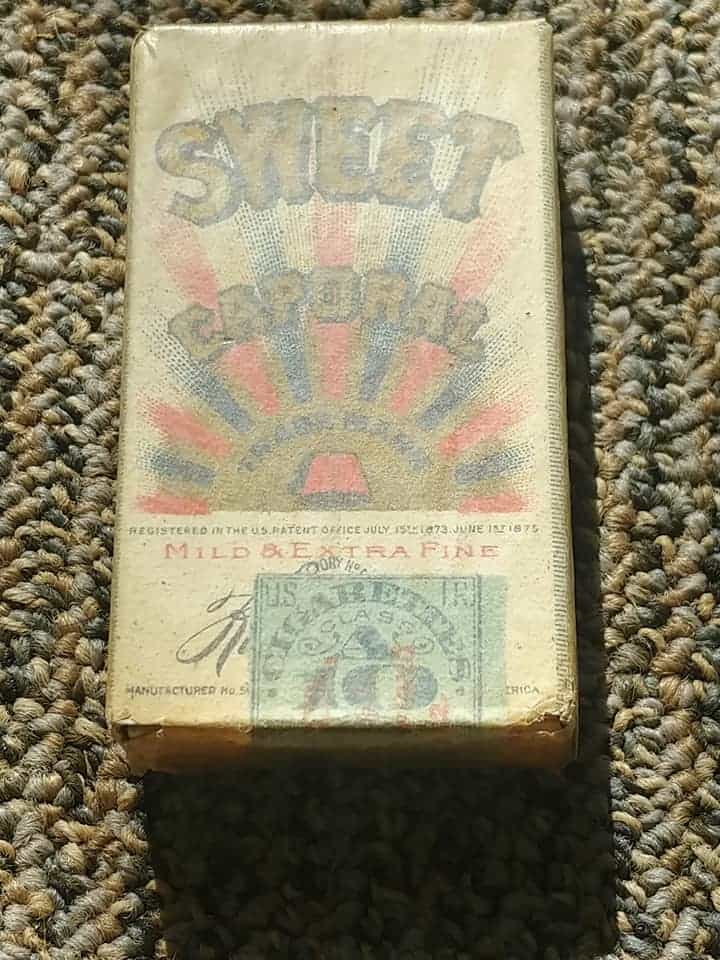 This Sweet Caporal pack was recently offered in a Facebook group for $1800 but I soon realized that there was zero possibility the pack could contain any T206 cards.

The few exceptions to this are the El Principe De Gales packs which have a clam shell box as shown below: 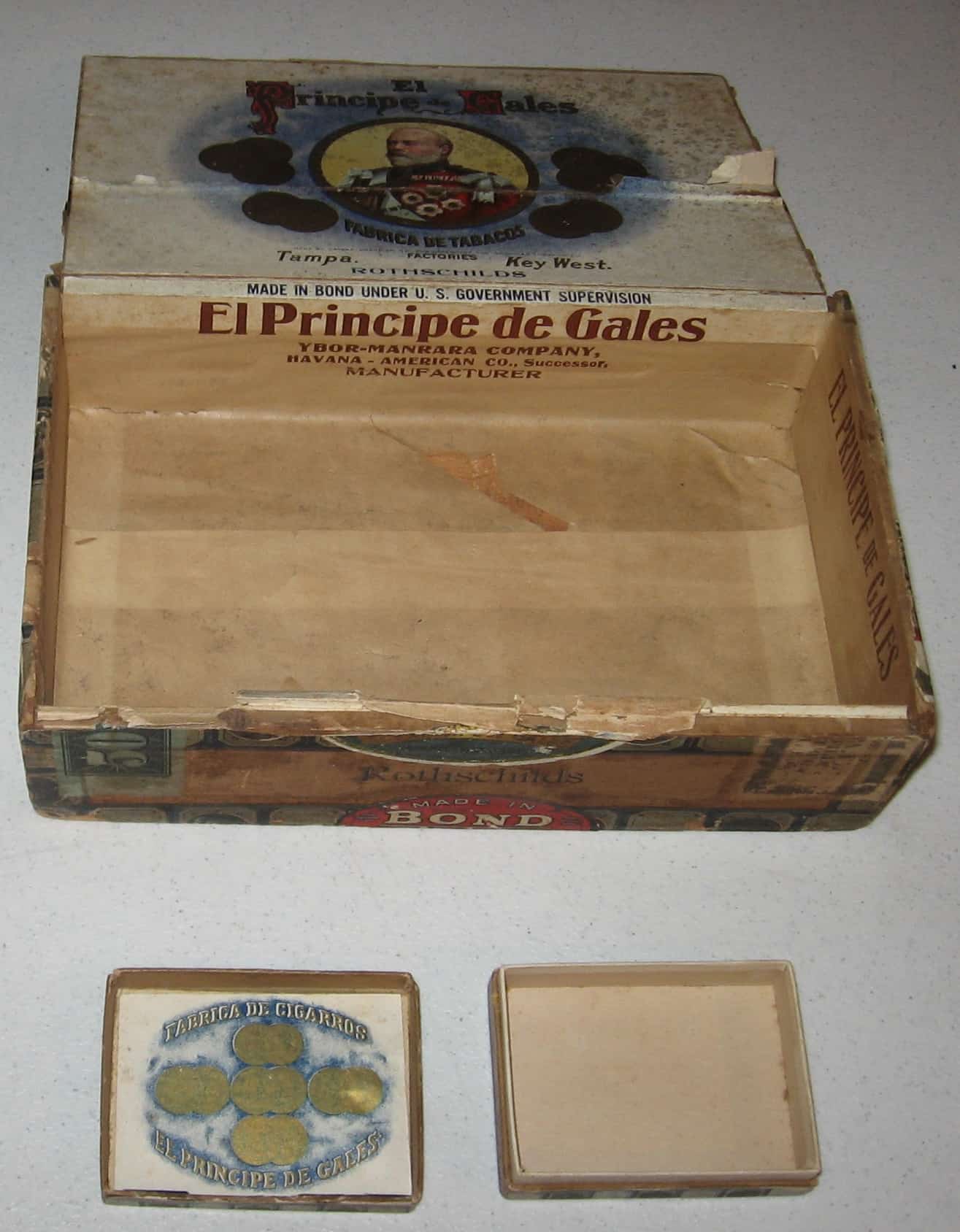 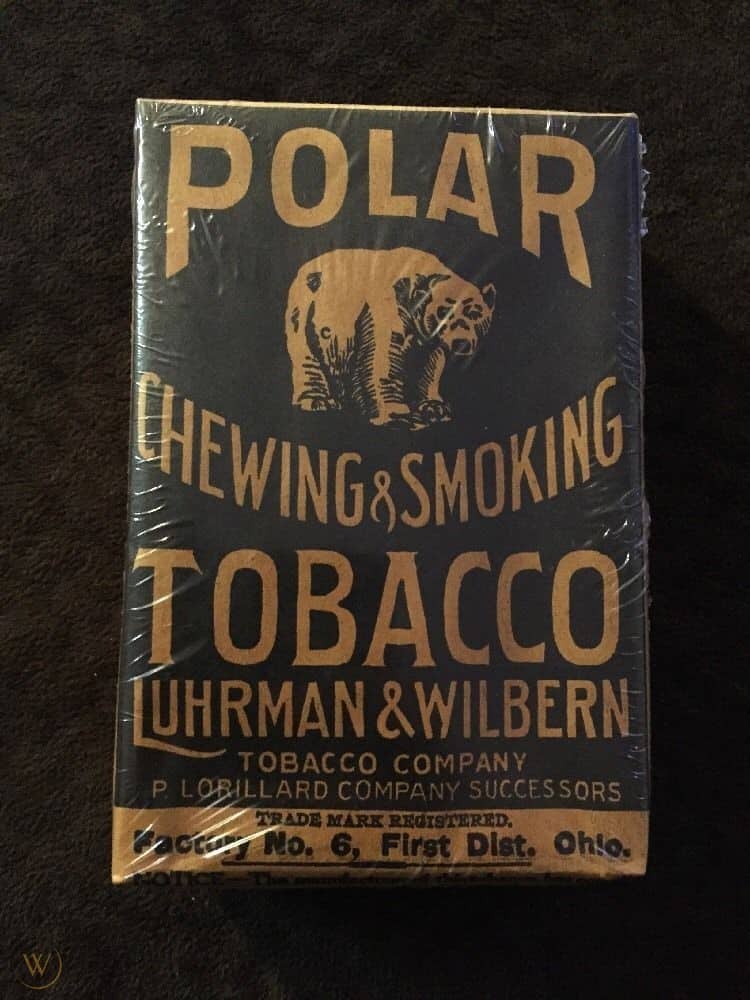 Note that Ty Cobb backed T206 cards were likely also issued in Ty Cobb tins with no tobacco according to Canfield. 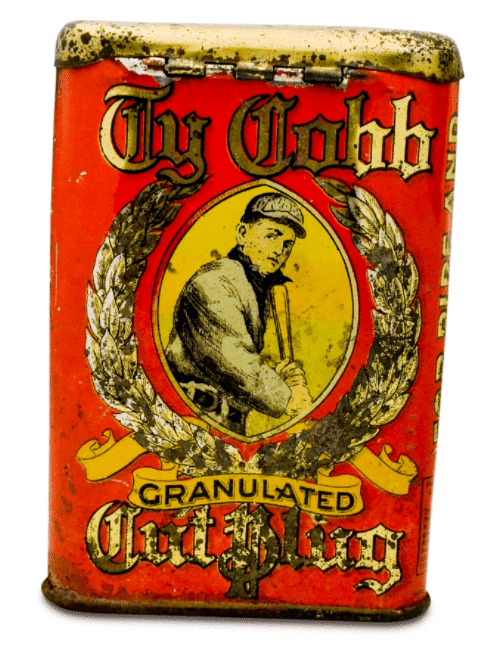 Lastly Tolstoi packs are the only packs that contain 20 cigarettes and were also issued in a shell box, shown below: 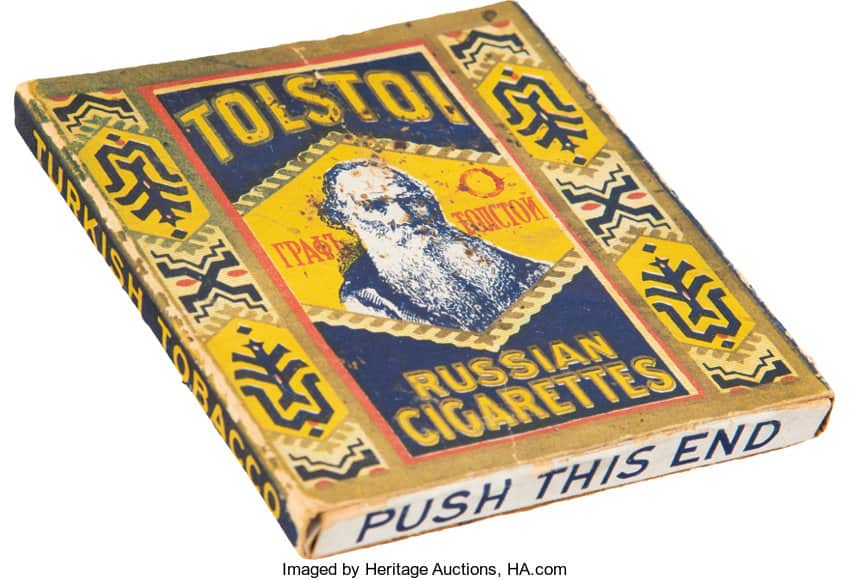 How To Determine If A Tobacco Pack Contains A T206 Card

As noted, I saw an unopened Sweet Caporal Pack on Facebook that seemed like it could be a gold mine.  First, I knew that Sweet Caporal  was one of the American Tobacco brands that was an issue in the T206 set.  So slam dunk right?

Not so fast.  It's a lot more complicated actually.  According to Canfield, there are two major items you need to look for in order to determine if an unopened pack has a T206 card.

First, we need to look at the tax stamp on the pack.  The tax stamp was issued on cigarette packs from 1879 and 1959, and oddly enough features the likeness of DeWitt Clinton, who was never even a President in the United States.

SIDE NOTE: The 10 or 20 on the tax stamps represent the number of cigarettes in the pack.

Here's a tax stamp below and one of the most important things to look at in relation to dating is the Series information (circled in blue). Here we can see that this stamp has a 'Series of 1910' noted. 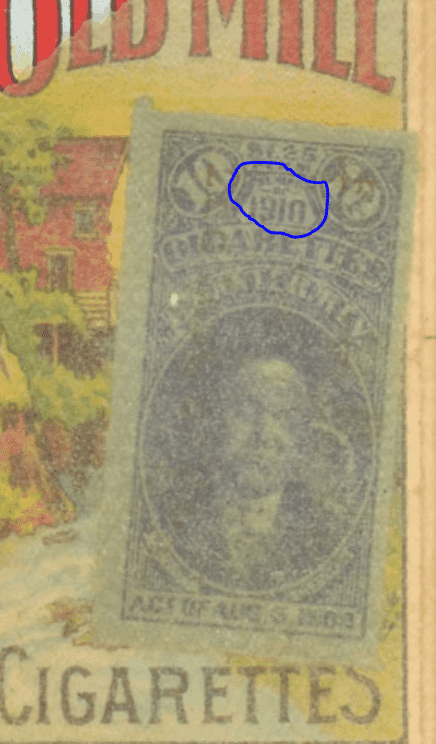 Unfortunately, 'Series of 1910' tax stamps were issued from 1910-1916, so this indicator is not always a guarantee of the pack containing a T206 card.

Now, some tax stamps (not all, including the one shown above) have overprint information which provide a date when the pack was manufactured.  If available, this can provide a much more definitive answer to the dating of the pack.

"A pack that was produced in the actual year of the tax stamp (for example a 1909 stamp produced in 1909) typically does not have an overprint.  There is a possibility that a tobacco manufacturer just missed the overprint and the pack was made later, but that's not a common occurrence"

Here's one with overprint information. 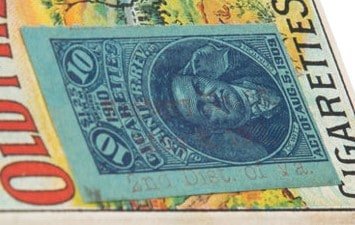 Hard to tell from the picture but this 1910 tax stamp has an overprint date of 1911, which puts us right where we need to be from a dating perspective (considering T206 cards were issued from 1909-1911).

So, this pack definitely has a T206 card, right?

Not so fast.  While we have the correct date of manufacture that is consistent with the issuance of T206 cards, we also have to ensure that the factory, state and district designation on the pack exterior match up with one of the factories where T206 cards were produced.

Here's a side view of the Sweet Caporal pack I mentioned earlier that I found on Facebook (PS -if you do see this pack for sale, please do not buy it): 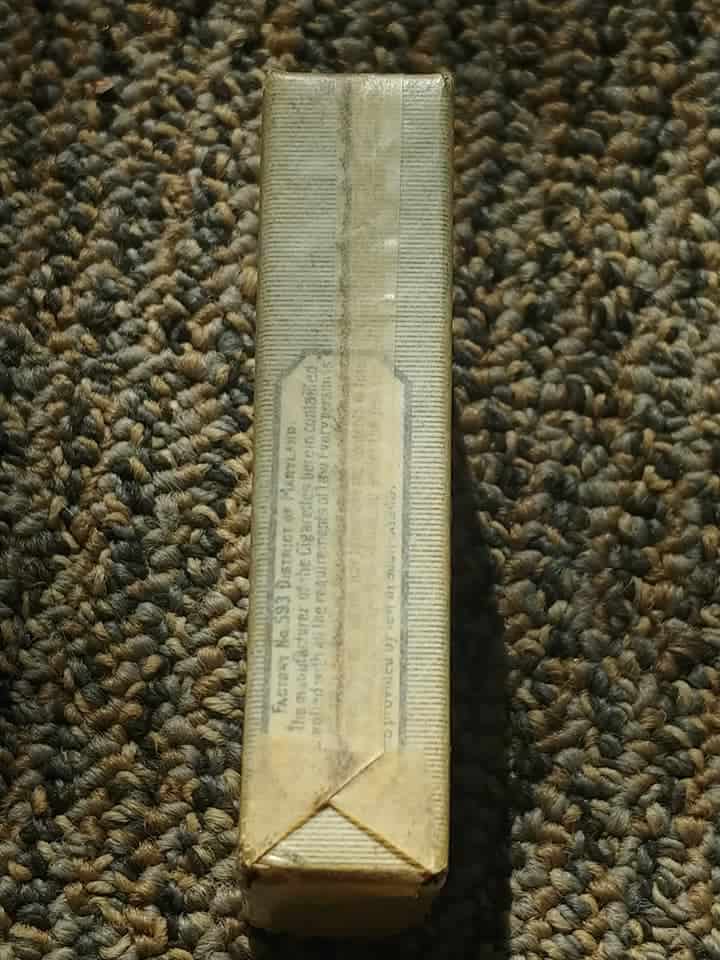 The side text says 'Factory 593 District of Maryland'.  This unfortunately means that this pack could not possibly hold a T206 card.

The outer pack must have factory information that matches up to one of the six factories in which T206 cards were distributed.

The Six T206 Factories Include:

Factories 17 and 25 in Virginia

So let's recap for a minute.

In order to determine if a pack might possibly hold a T206 card, we would follow these steps:

1) First, make sure that you are dealing with one of the 16 branded cigarette packs from the T206 set.

3) Make sure the tax stamp also has the '10' in the upper left and right corners  and not a twenty.  Note that the Sweet Caporal Facebook pack I previously noted had the 10 lower on the stamp, and we know that tax stamp was not produced prior to 1918.

3) Look for overprint information.  This really helps solidify when the pack was actually manufactured.  Many packs unfortunately will not have the overprint.

4) Check for the factory on the outside of the box to make sure that it matches up with one of the six T206 factories.

Notably, even if the date and pack contents (usually 10 cigarettes) and factory match up, it's not always a given that the packs contain a T206 card.

Scot Reader notes that 'Bird and fish subjects were reportedly inserted into Old Mill, Piedmont, Sovereign and Sweet Caporal packs during 1910 and 1911 as contemporaneous alternatives to baseball subjects'

One Important Note: If it's a Drum Pouch, it cannot contain a card.  Jon Canfield notes that "Drum never placed cards in tobacco pouches - only cigarette boxes. Drum is one of the rarest brands with only 3 known boxes ever to be discovered."

Here's a picture of two opened Drum packs that would have contained cards, from the collection of Canfield. 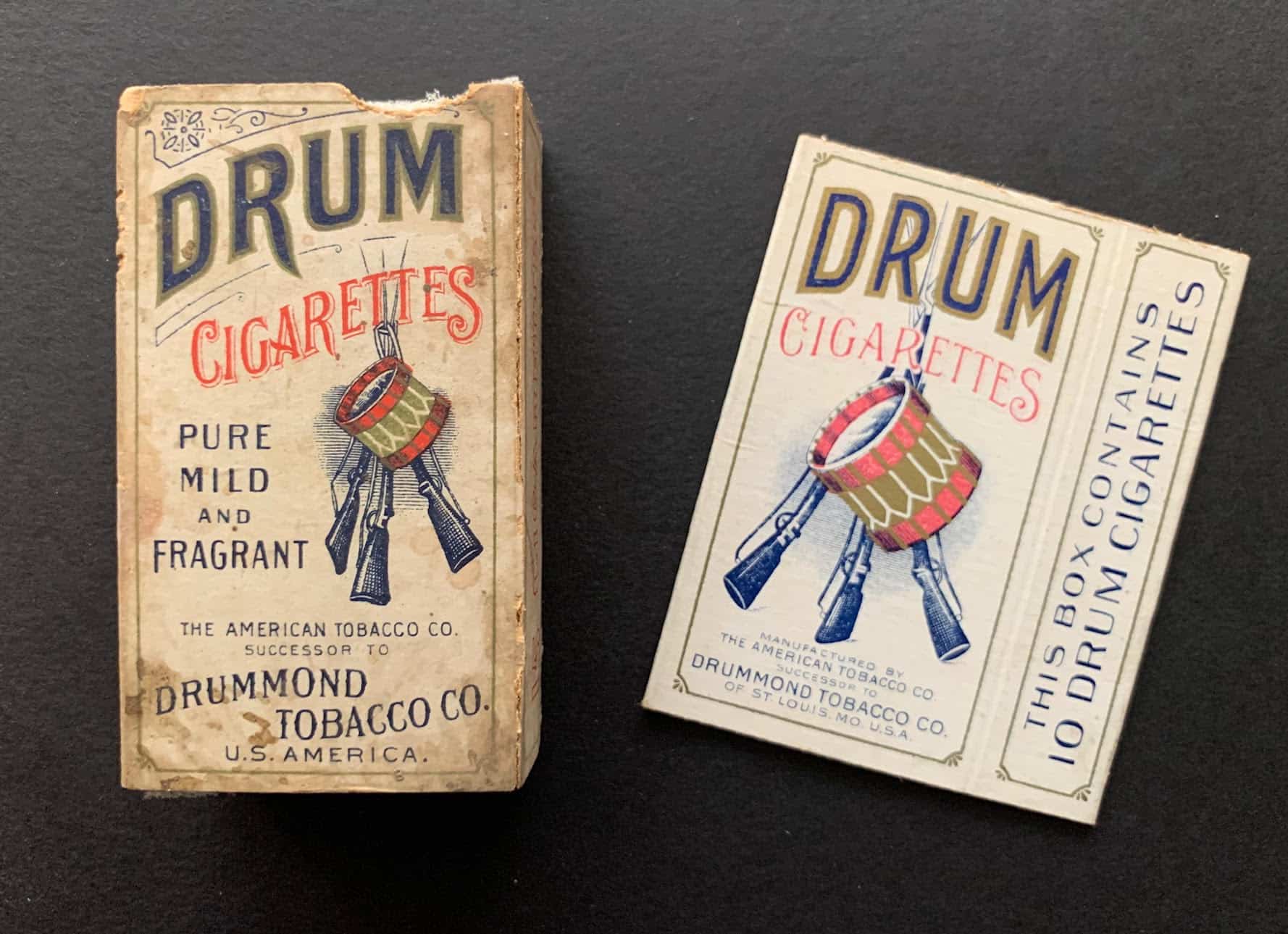 How Many Unopened T206 Packs (with cards) Still Exist?

It's hard to say definitely how many unopened tobacco packs (with T206 cards) still exist, although the number is probably rather small.  Most of the unopened packs that you find advertised on eBay are not the correct year or factory and have no possibility of holding a card.

Canfield believes that there are probably less than twenty packs (with the potential for containing T206 baseball cards) that still exist.  It's possible that the number is low, but the fact is that there aren't many out there.

In addition, Canfield says that GAI (a now defunct pack authenticator) incorrectly labeled some old packs, so collectors need to be careful even if a pack has been graded.

There have been a few sales at auction houses in the last several years, but it's not common that packs (with the potential for holding cards) come up quite often.

There is currently an unopened Sweet Caporal pack on eBay for sale at $6995  (see below). 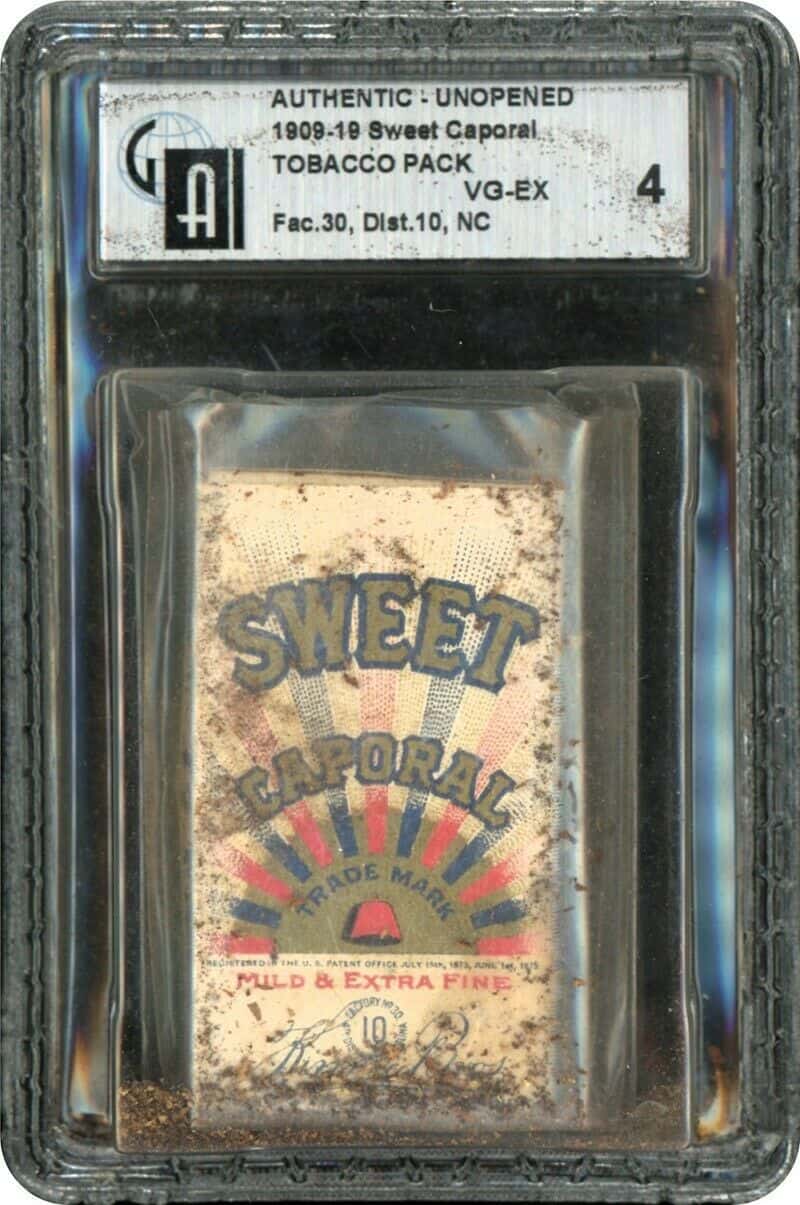 While it's hard to see if there is any overprint on the tax stamp, the pack appears to be of the right date (and factory) to potentially hold a T206 card. 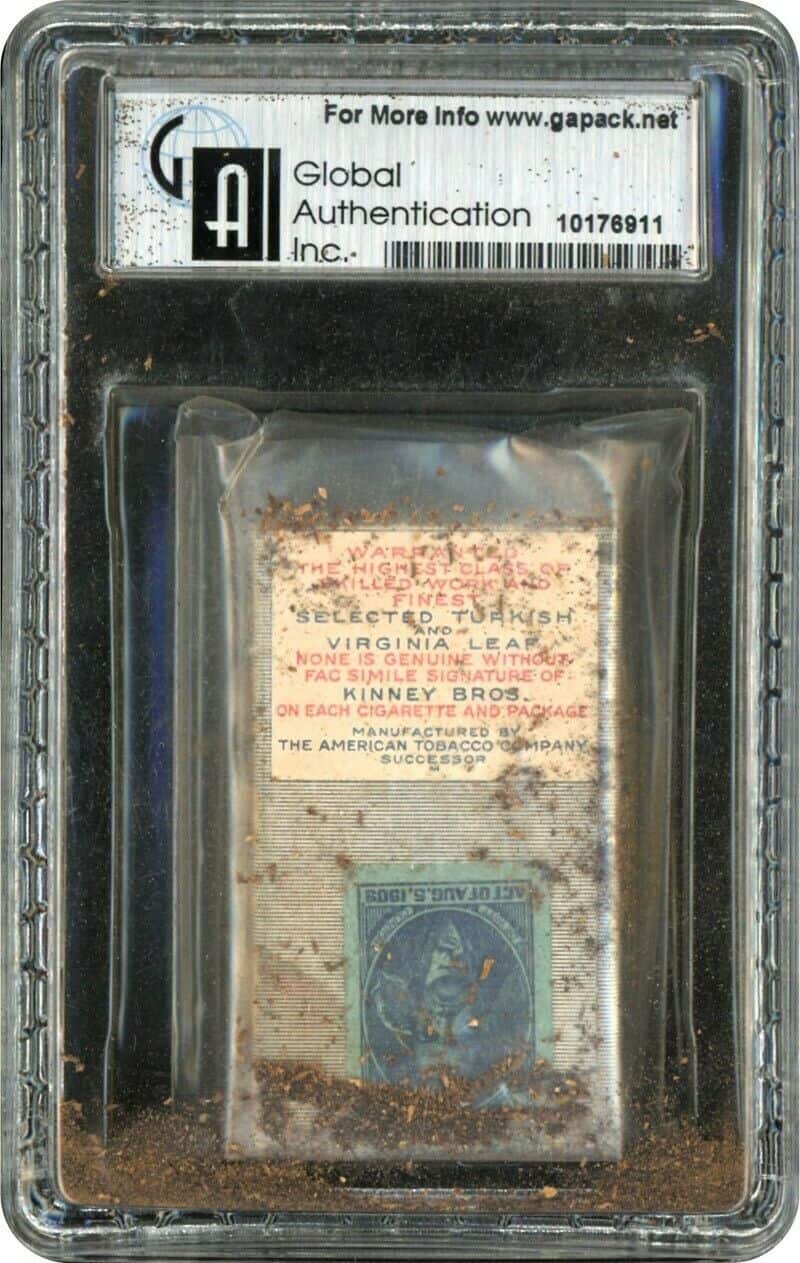 But of course it is still a risk.  It might not contain any card at all.  And let's not forget these packs are now over 110 years old, so the odds of significant damage to the card from the tobacco is a distinct possibility.  One collector referred to some cards they had witnessed pulled from packs as having 'skin cancer' due to the internal damage caused by the tobacco.

Here's a guy that got stiffed on eBay buying a non-period pack with no card.  You can see in the video, the Factory 25 in VA is correct, but the sizing of the pack is wrong, too wide for a T206 era pack/card.

Although here's one that turned out a bit better, although it was only a common pulled from the pack:

Can You XRAY Old Tobacco Packs To See If A Card Is Inside?

It has been commonly believed for years that collectors could ultimately x-ray an unopened T206 pack to see if there was a card inside.

According to Canfield, this is a total myth.  His father was a dentist and they tried it out using some office machinery.  The result?  It was impossible to see the outline of anything in the pack.

So, sorry to say, an x-ray machine isn't going to provide any help with unopened tobacco packs.