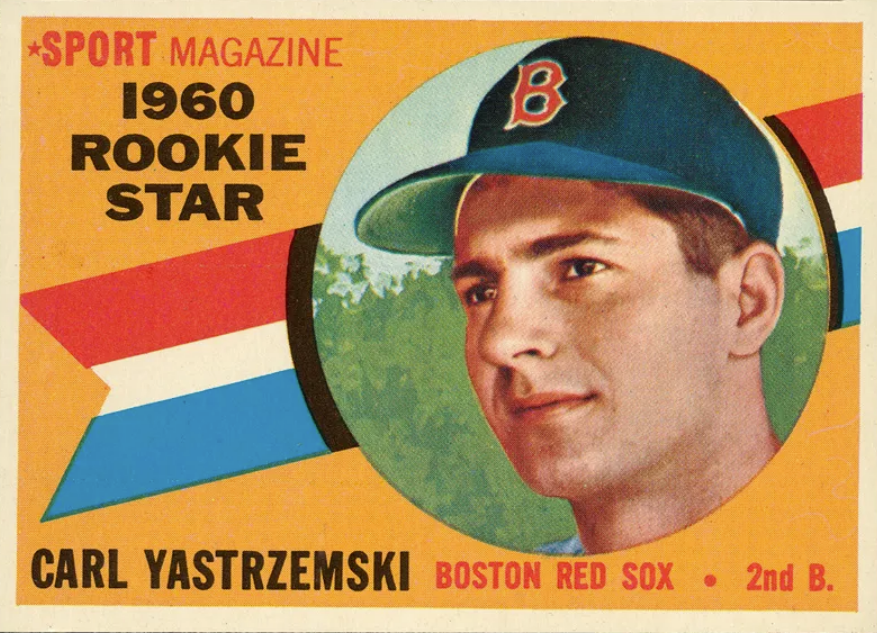 The son of a potato farmer, Carl Yastrzemski came to the big leagues under a ton of pressure.

The Red Sox had hand-selected Yaz as the replacement for one Ted Williams.

The shorter and lankier Yaz struggled out of the gate, even getting batting tips from the ‘Splendid Splinter’.

Yaz eventually turned it around, cementing his legacy in baseball and Red Sox history.

The 1960 Topps Carl Yastrzemski rookie card is one of the best-designed and most valuable rookie cards in the hobby.

In this piece, we take a look at the career of Yaz, his 1960 Topps Rookie card, and whether it might be a good investment for vintage card collectors.

Carl 'Yaz' Yastrzemski As A Player

The great Ted Williams closed out the 1960 baseball season with a home run in his last at-bat. It was the perfect end to one of the most legendary careers in baseball history.

The Red Sox had a replacement in mind for the retiring Williams. Carl Michael Yastrzemski was one of the best college prospects at the time and signed by the Red Sox after one year with Notre Dame.

"Yaz" ripped up the minor leagues for two seasons, batting well over .300, winning the league's MVP And Rookie of the Year award in 1959.

Slotted in as Ted's heir apparent in left field, Yaz immediately faced intense pressure to live up to the legend of Williams.

They were comparing me with the greatest hitter ever to play the game. It almost broke me. You start having doubts. ‘Can I play in the big leagues?'”

Carl Yastrzemski on his first season with the Red Sox

Early on during the 1961 season, the Red Sox asked Williams to come in and evaluate Yastrzemski's swing.

My impression when I first saw Carl Yastrzemski was, “Gee, what a twitchy guy this is, all coiled up like a spring, ready to pop, just can’t wait to hit.” Naturally, if you’re so nervous it affects your control at the plate, then you’ve got a problem" - Ted Williams on Carl Yastrzemski's swing early in his career

Ted didn't critique Yaz but provided words of encouragement and he turned it around. Yaz's 1961 stats weren't tremendous (he batted only .266 in 1961), but Red Sox fans would soon see the results of his tremendous work ethic. 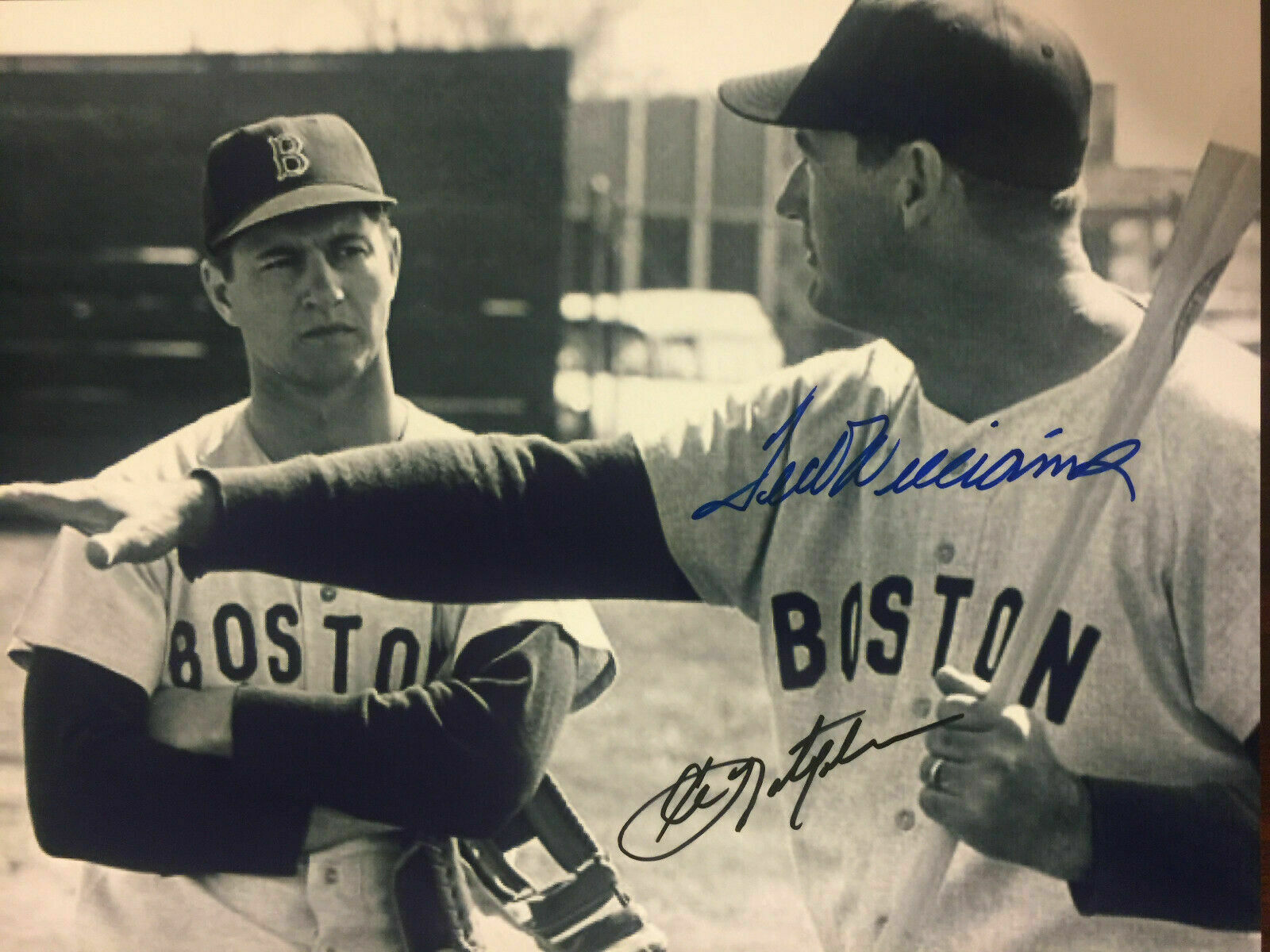 Over the course of the next several seasons, Yaz really turned it on, and in 1967 Yaz delivered the best season of his career. Yaz finished as the 1967 MVP, Triple Crown and Gold Glove winner.

The '67 Red Sox 'Impossible Dream' team went from basement dwellers to pennant winners, with their first winning season since 1958!

Yaz was a huge part of the 1967 pennant run batting .400 with 3 home runs over 25 at-bats during the playoffs that year.

"What made Yaz really great was that he wasn't just focused on himself. He focused on what other guys were doing, too. He was like an extra coach. Yaz was everything to us."

Carl Yastrzemski was inducted into the Baseball Hall of Fame in 1989. His #8 was also retired by the Red Sox that same year. Over the course of his 23-year career, Yaz batted .285, with 452 home runs and 1844 RBI's, securing 18-All-Star game berths, winning 7 Gold Glove awards.

The 1960 Topps Baseball set is one of the best Topps designs of all time.

The base cards have a horizontal design with a unique blend of colors making for a very memorable issue. 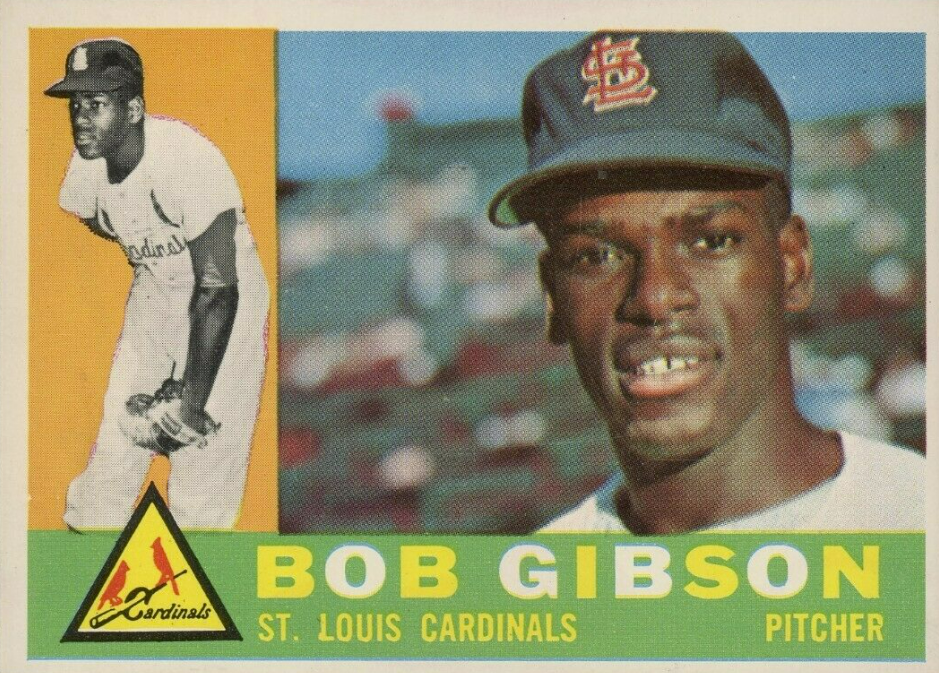 The 1960 Topps Sport Magazine Rookie Star cards (cards #117 to #148) have an orange background with a red, white and blue flag behind the player's image.

The 1960 Topps #148 Carl Yastrzemski card is the most valuable card in the set. There is one other Sport Magazine Rookie card of note, the rookie card (#136) for pitcher Jim Kaat who was recently elected to the Baseball HOF.

The 1960 Topps Sport Magazine Rookie Star cards are probably one of the best Topps rookie card designs of all time.

The light orange background, the colorful flag, and a young Yaz make for one of the prettiest vintage rookie cards.

The back of the #148 Yaz rookie card provides his minor league stats and notes that the Sox gave Yastrzemski $100,000 for signing with the team. 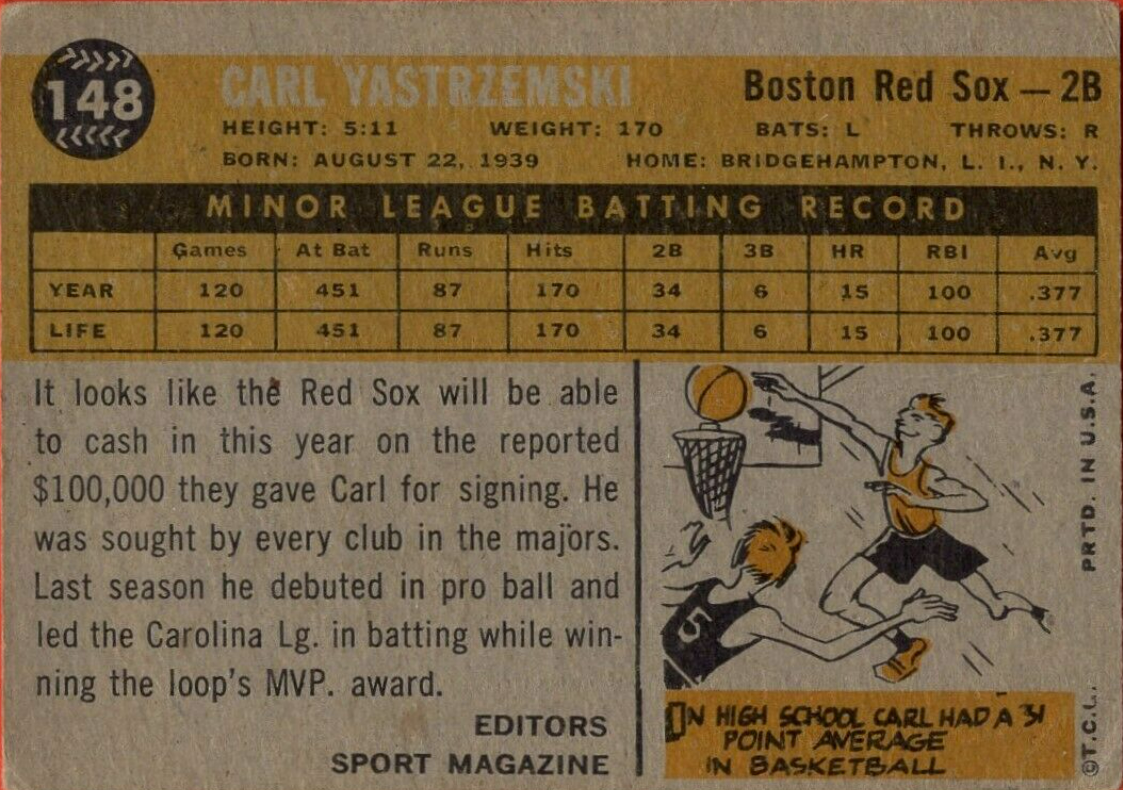 Back of the 1960 Topps Yaz Rookie Card

How Much Is A Carl Yastrzemski (Yaz) Rookie Card Worth?

The PSA 10 Gem Mint Carl Yastrzemski is a unicorn.

There is only one copy in existence and it is part of the illustrious Dmitri Young collection. 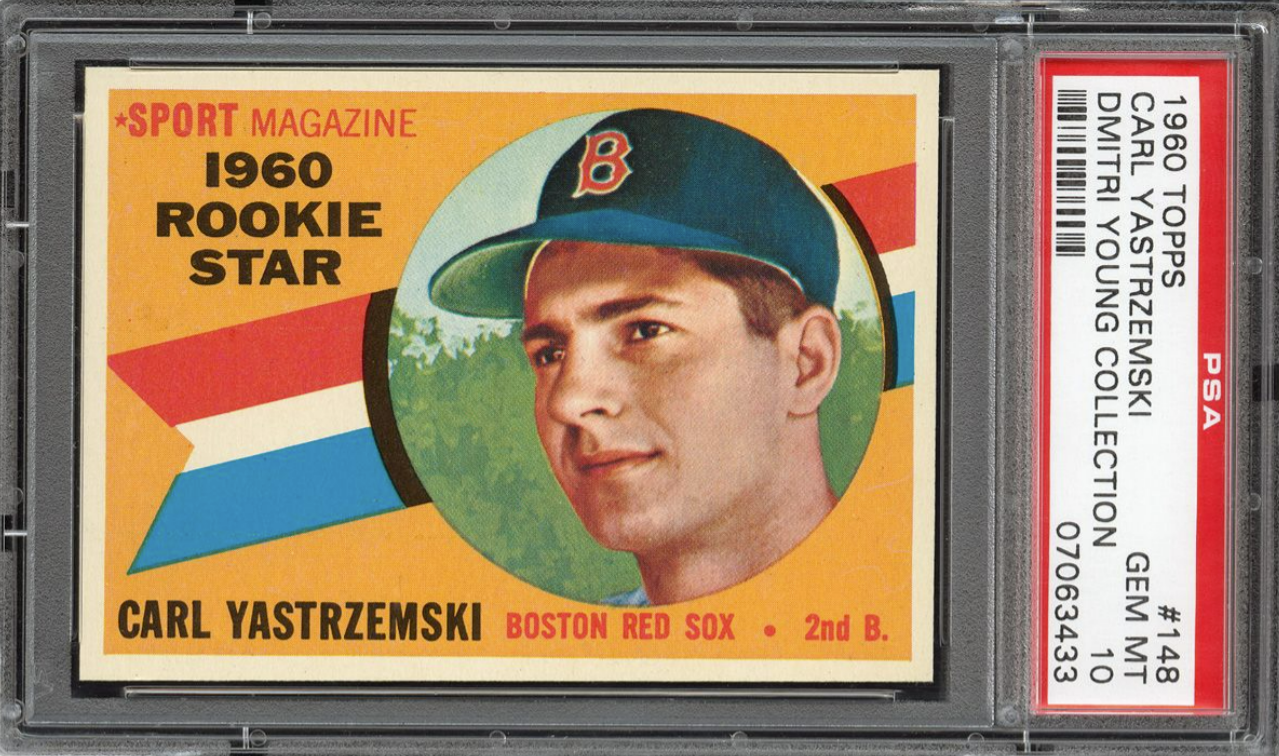 What would this PSA 10 be worth today? Hard to say, but I'd guesstimate the value is easily in the $1 Million + range. 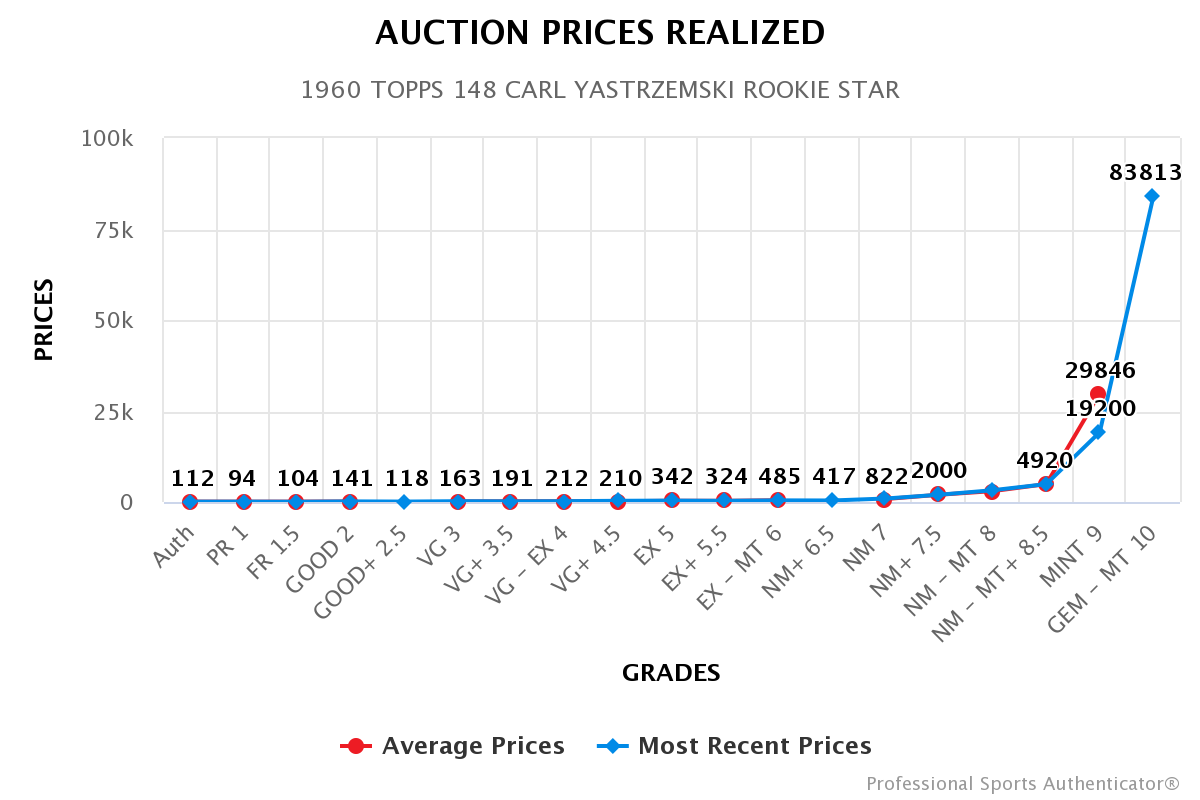 There are only 42 PSA 9 (Mint) Yaz Rookie cards, and we have more current sales data for that one.

Thankfully, for us without $20k to spend on one single card, lower grade copies of Yaz's rookie card are quite affordable.

Given the sizeable population, even a PSA 5 (Excellent condition) can be found now for less than $400.

In fact, a PSA 2 (Good) Yaz rookie can usually bought at auction for less than $200.

This is one of the bonuses of a correction in the vintage card market! 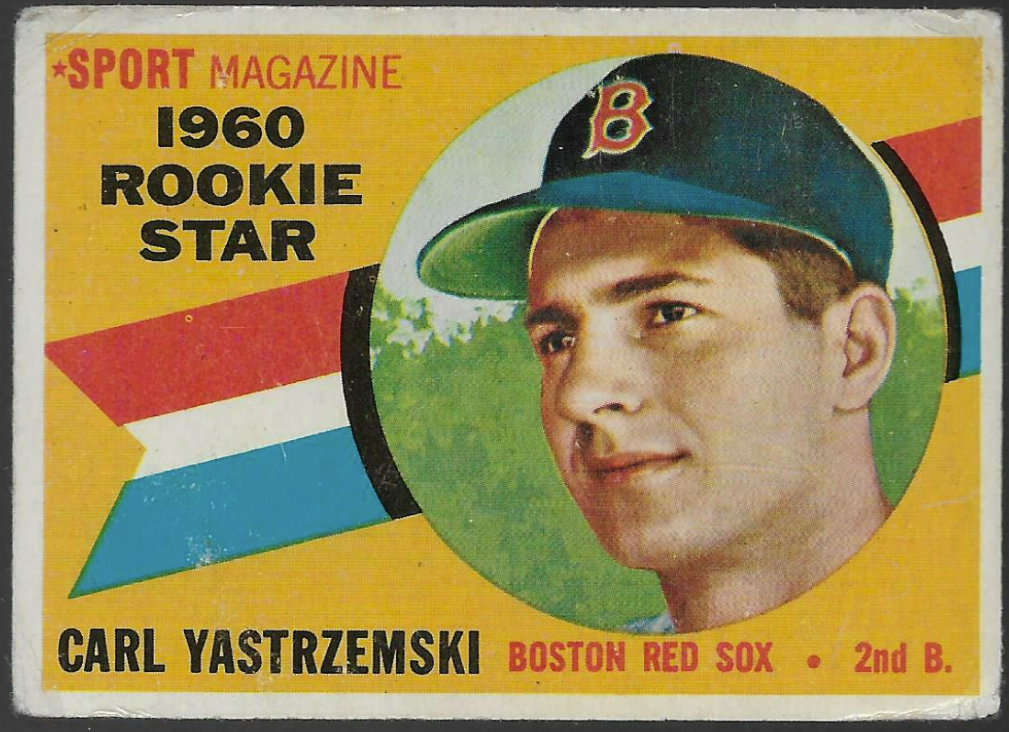 What Is The Current Graded Population For Carl Yastrzemski's Rookie Card?

There are over 8,500 PSA graded Carl Yastrzemski rookie cards, making it the second most graded card in the 1960 Topps set (behind only Mickey Mantle #350).

This doesn't include any ungraded copies or graded cards from Beckett or SGC.

PSA has only graded one Gem-Mint (PSA 10) copy of Yaz's rookie card.

PSA 10's in the entire 1960 Topps set are quite scarce, with only 300+ earning the prestigious grade. 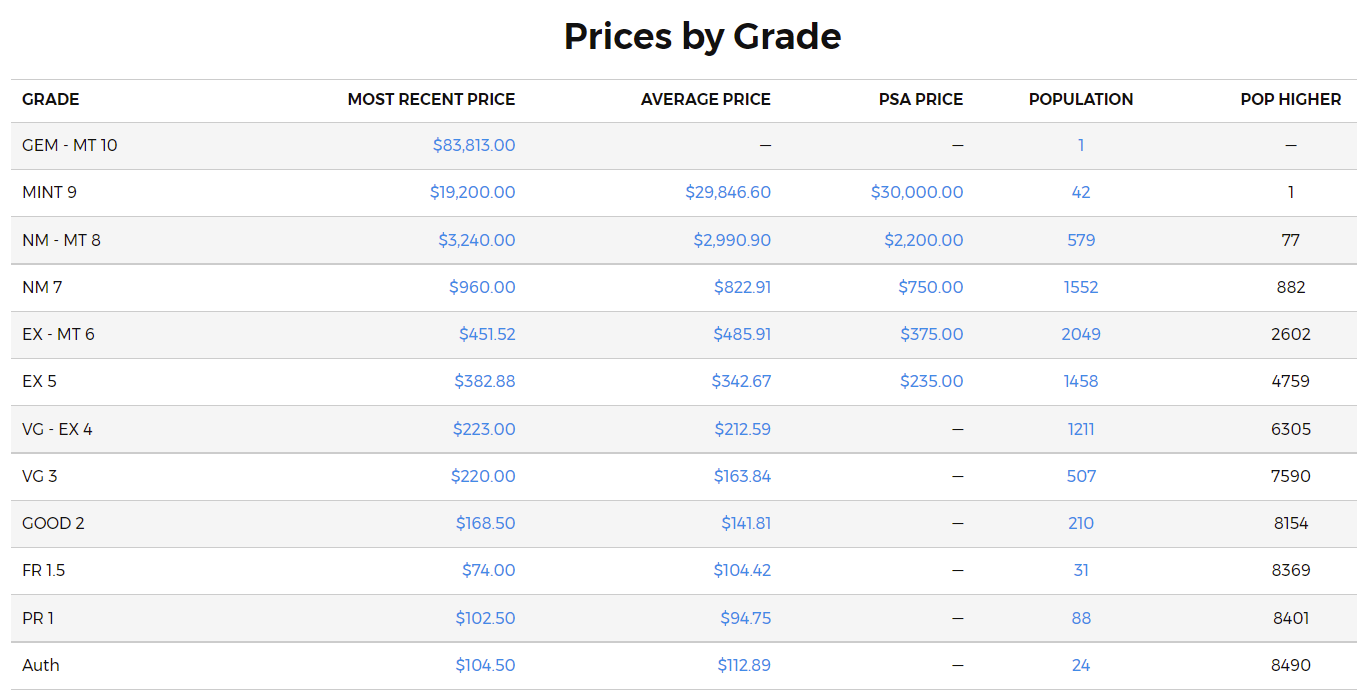 PSA 9 Yaz rookies are quite scarce as well; with only 42 graded by PSA.

But, once you reach into PSA 7 range and below there is a massive explosion in population.

It's clear. The 1960 Topps Carl Yastrzemski rookie card is by no means a rare card, especially in low to mid grade.

How Much Is An Autographed Carl Yastrzemski Rookie Card Worth?

Carl Yastrzemski is still alive and he has been a fairly liberal signer over the years.

On average, autographed Carl Yastrzemski baseballs sell for under $100. Autographed Yaz baseball cards range in value, but typically start at around $50. 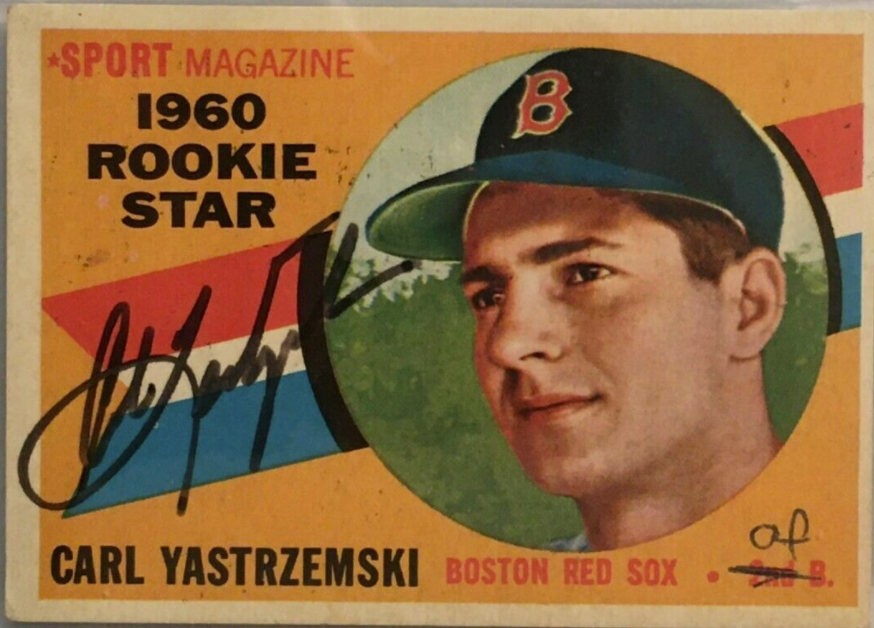 The price is dependent on card condition and the quality of the signature.

But typically a Yaz auto rookie on a card in mid grade fetches around $500 or higher at auction.

Yaz was one of the best in baseball during his playing days.

He remains one of the most recognized players from the 1960s.

Maybe not exactly Top Tier with the likes of Ruth, Cobb, Wagner, etc, but Yaz is good for second tier (Bill James puts him at #37 best overall)

High grade Yaz rookie cards (PSA 9 chart below) have ebbed and flowed over the past few years. His high grade cards did fall in value during the recent card market correction. 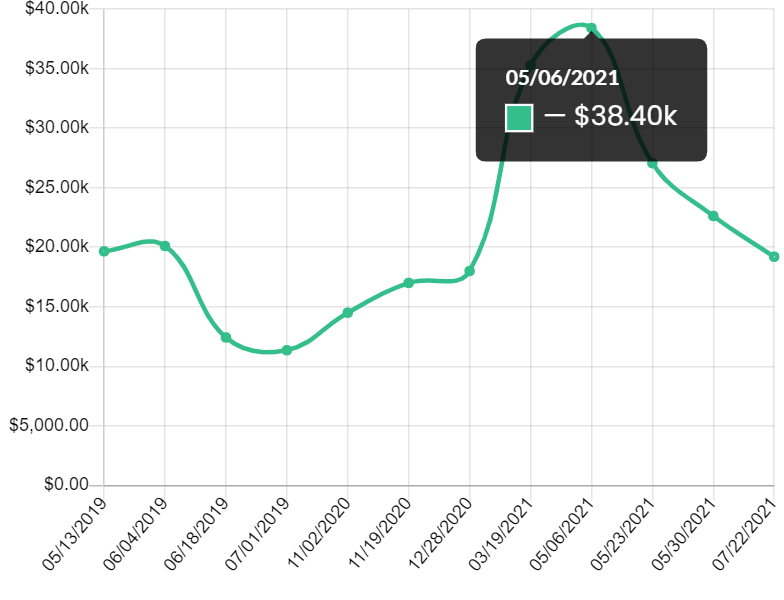 The legacy of Yaz and his ties to the bigger than life Boston market will keep the values of his cards stable. But the high supply is a concern.

Opt for a nice autographed Yaz rookie card if you can score a good deal. His autographed rookie cards are likely to be a better investment over the long run.