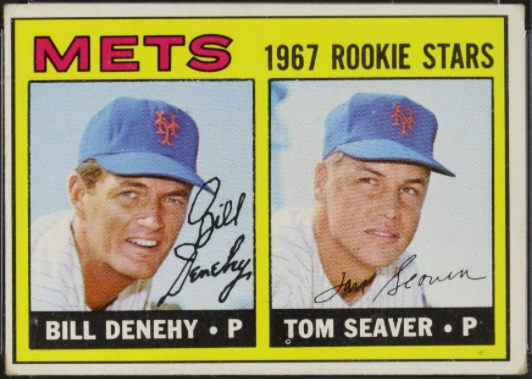 Bill James ranked Tom Seaver as the sixth-best pitcher of all time.

James also noted that with a better team, Seaver could have been one of the best.

The 1967 Topps Tom Seaver Rookie Card is one of the most prized rookie cards in the hobby and of the premier rookie cards from the 1960s.

In this piece, I take a closer look at Seaver’s rookie card. Exploring the existing PSA population reports, values, and investment potential.

Tom Seaver As A Player

Tom (aka "Tom Terrific") Seaver is well recognized as one of the best pitchers in baseball history. Seaver was well known for his pitching smarts and powerful arm, but also referred to by teamates as a "consumate professional".

Former Mets teammate Cleon Jones called Seaver 'trustworthy and a cool cat, someone you would want your kids to grow up like'. 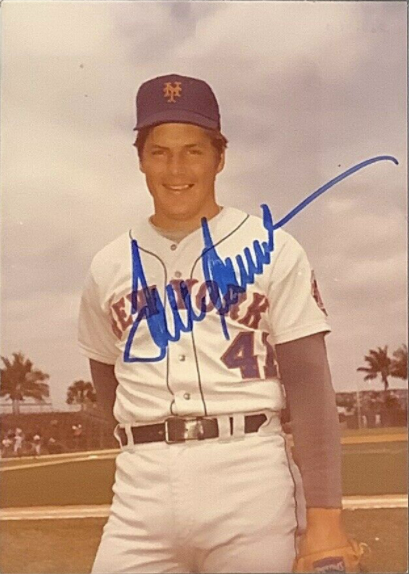 Seaver started his career on a strong note, winning the 1967 Rookie of The Year award with the Mets.

It would be the first year in a dominant string of success for Seaver.

He also led the Mets to a World Series victory in 1969. Seaver pitched eleven seasons with the Mets, before he was traded to the Cincinnati Reds in 1977 at the age of 32.

The trade of Seaver was a big blow to Mets fans. Seaver was a huge fan favorite and had become the face of the Mets. Some even compared him to the great Christy Mathewson.

Seaver was a great pitcher for the Reds, tallying an impressive 75-46 record over six seasons. He had a quick stint with the Mets in 1983 before finishing up his career with the White Sox and Red Sox.

"Tom Seaver was the consummate professional. He always figured out some way to beat you. When you were quick enough to catch up to his fastball, he used his intelligence"

Tom Seaver was inducted into the Baseball Hall of Fame in 1992. He earned 98.8% of the vote, which at the time, was the highest ever percentage of votes. He was joined by fellow pitching star Rollie Fingers.

The 1967 Topps Baseball set is one of my favorite Topps Sets of all time.

The base cards have clean white borders with bold, colored fonts on the front of the card along with a fascmile autograph. 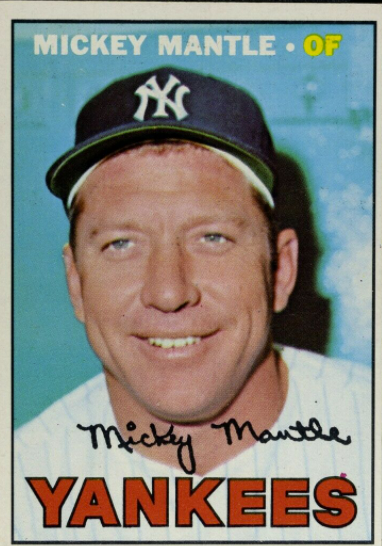 The 1967 Topps Rookie Stars cards have yellow borders and are considered a part of the harder to find high numbers (#s 534-609) in the set.

The 1967 Topps #581 Tom Seaver and Bill Denehy card is the most valuable card in the set.

Note that the second most valuable card in the set, is another rookie stars card - Rod Carew rookie card #569.

While I like the basic design of the 1967 Topps cards, I love the design on the rookie stars cards.

The yellow border makes it pop.

And on Seaver's rookie card, the red Mets text and the blue on both Seaver and Denehy's hats makes for one beautiful card.

The back of the #581 Seaver/Denehy rookie card provides a line of minor league stats for each player. In addition, a short bio. For Seaver, it was clear based on his stats, that he might have some potential. 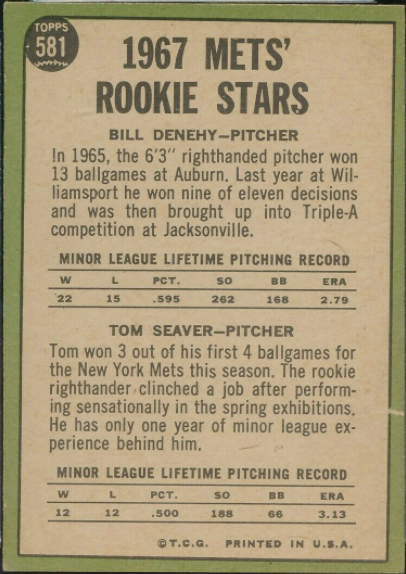 The back of the 1967 Topps Tom Seaver Rookie Card

What About Bill Denehy?

Maybe you noticed that Seaver has another guy on his rookie card. Most are not familiar with Bill Denehy. And rightfully so, Denehy barely made a dent in the Major Leagues, pitching only 104 innings over three seasons with the Mets, Senators and Tigers.  However, at the time, Denehy was a highly regarded prospect, on par with Seaver. Denehy got hurt and was ultimately traded in 1967 for manager Gil Hodges - yes traded for a manager! (Great Resource on Denehy)

How Much Is A Tom Seaver Rookie Card Worth?

High grade copies of the 1967 Topps Tom Seaver Rookie Card are quite expensive. 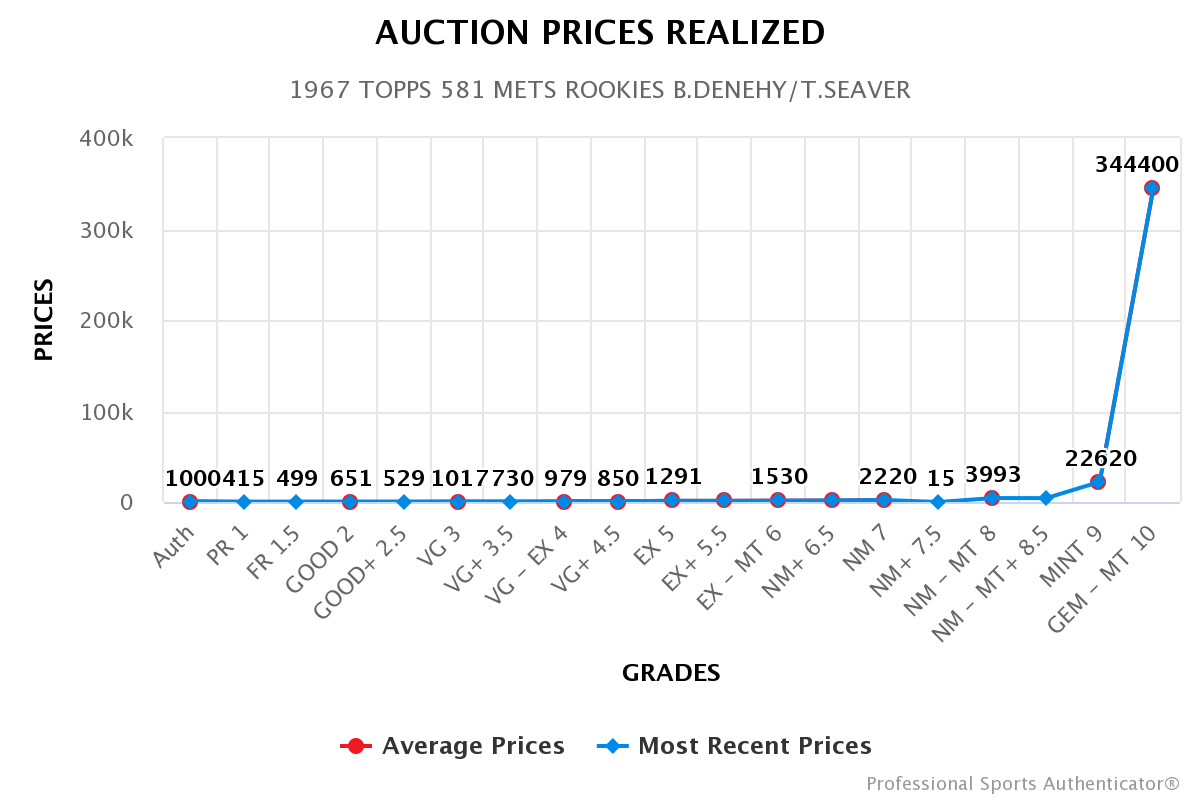 One step down is a PSA 9 (or Mint condition), which is still going to be out of reach for most collectors.

The good news is that low to mid grade copies of Seaver's rookie card are within budget for most collectors.

In fact, a PSA 2 (Good) or lower grade Seaver rookie typically sell for $500 or lower.

But, if you look hard enough on eBay, you might be able to scoop up an ungraded copy for even less. 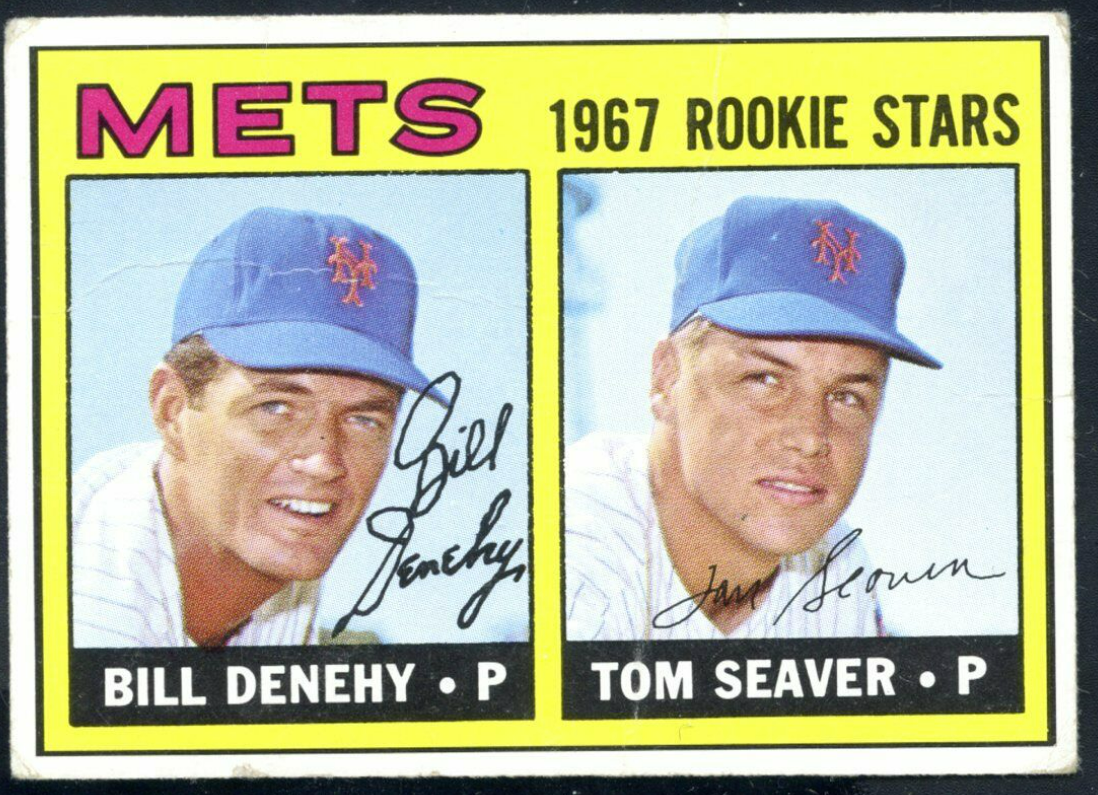 Search hard enough on eBay and you might find a good deal on a raw, ungraded Seaver rookie card.

What Is The Current Graded Population For Tom Seaver's Rookie Card?

In total, PSA has graded more than 3,500 copies of Seaver's rookie card. This does not include ungraded copies or graded versions from Beckett or SGC. 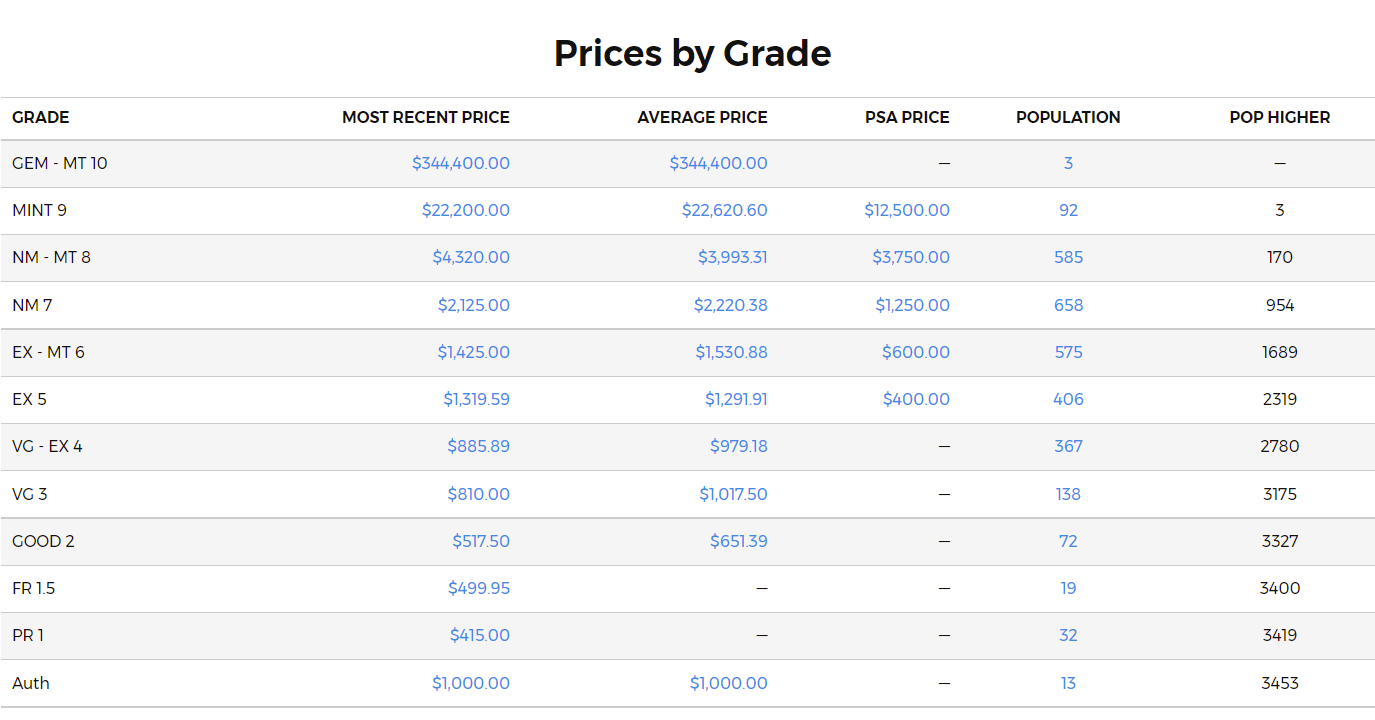 PSA 9 Seaver rookies are still a tough find, with only 92 graded by PSA.

The graded population starts to expand once you move to PSA 8 (NM-MT), as does the price of the card.

In total, there are over 2500 PSA graded Seaver rookie cards ranging from PSA 4 to PSA 8.

Thus, Seaver's rookie card is not what we would call rare. Like any other premier rookie card, the value is dependent on grade.

You either pay five figures for a rarer PSA 9 Mint rookie card or drop several grades to find a more affordable copy.

How Much Is An Autographed Tom Seaver Rookie Card Worth?

Tom Seaver passed away in 2020 at the age of 75. Since his passing, autographed copies of his cards have surged in value.

On average, autographed Tom Seaver baseballs sell for between $150 to $200. Autographed Seaver cards range in value, but typically start at around $150.

Even more of a score? Dual autographed copies, which include both Tom Seaver and Bill Denehy's signatures.

I haven't come across many, but there is a dual Seaver/Denehy auto rookie card for sale on eBay for $10,000. 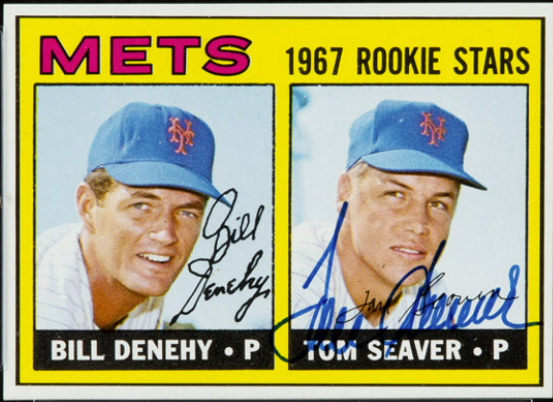 Seaver to this day is still considered one of the best pitchers of all time. Plus, people liked Seaver, which only helps cement his legacy.

Seaver's rookie card is not rare, and there's a sizeable graded PSA Population.

But, unfortunately, there is a limited supply of autographed Seaver rookie cards. 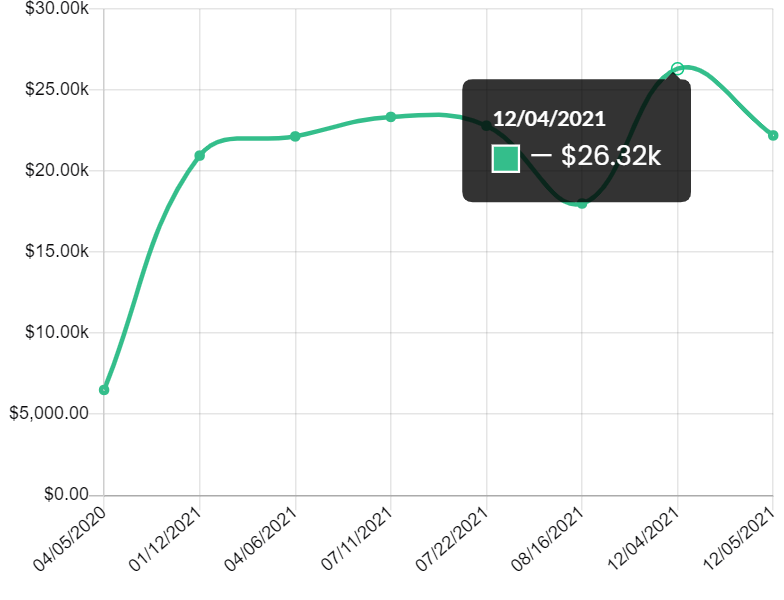 PSA 9 Seaver rookie cards have performed quite well, even despite a pullback in vintage card prices.

But, lower grade Seaver rookie cards are much more affordable.

Those with bigger budgets can buy high grade Seaver rookie cards with confidence. Even lower grade copies are likely to retain good value.