Berk Ross Cards – A Closer Look at An Underrated ‘Champion’ 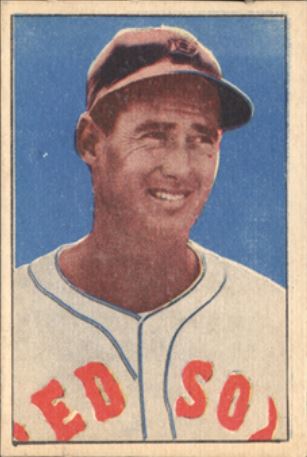 The 1951 and 1952 Berk Ross “Hit Parade of Champions’ sets have started to gather more interest from collectors in recent years.

The massive star power across each of the 72 card sets is one reason for the popularity.  The cards are also scarcer than any of the popular national issues from the era.

I’ve always like the Berk Ross cards; something about the grainy images has always appealed to me.

Yet it wasn’t until I started diving into some the population reports when I recognized that the Berk Ross cards were significantly undervalued.

Of course, values are often subject to collector interest in a particular issue.  However, the Berk Ross scarcity combined with the star power make these sets one of the better buys for vintage collectors.

In this piece we dive into the background of the sets, more details about the issues, along with the players in the sets and the corresponding availability and values.

There’s an air of mystery surrounding the two Berk Ross issues from 1951-52.  First there isn’t a lot of information available about Berk Ross, who was believed to be a New York based sports photographer.  Some speculate that Ross was a Bowman photographer, given that many of the early Bowman issues utilize some of the same images from the two Berk Ross sets.

And some, such as the late Bob Lemke believe that the Berk Ross issue was actually an unlicensed issue due to the fact that several Giants players in the 50’s sued two popcorn firms for distributing the Berk Ross cards without permission.  From Lemke’s research:

Two popcorn firms have been asked by Supreme Court justice Samuel Gold of New York to show cause why they should not be stopped from placing pasteboard photographs of seven members of the Giants inside bags of their product. Larry Jansen, Bobby Thomson, Sal Maglie, Wes Westrum, Montia Kennedy, Dave Koslo and Bill Rigney also instituted action to recover $50,000 each from the companies on the ground that their pictures were used without their consent.

I’ve had an easier time researching sets from the 19th century.  There just isn’t a lot of consistent information out there about Berk Ross.  Thus, the Berk Ross set sort of reminds me of the early strip cards, with a lack of clarity about distribution and creation.  Thus if anyone has more information on Berk Ross, the photographer and the company, please email me at chris@allvintagecards.com.

What I can tell you about are the facts of the sets.  The first Berk Ross multi-sport set was issued in 1951 and consisted of 72 cards with 40 baseball players.  The set was issued in boxes, sold for ten cents and came with two cards that were perforated in the middle. 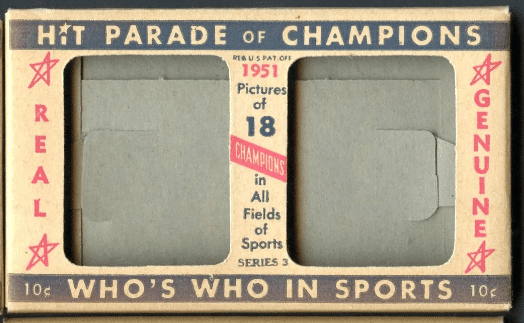 As shown below the cards were issued with a perforated middle, meaning that collectors had to tear the cards apart.  Uncut panels are quite rare and normally command a premium over separated cards. 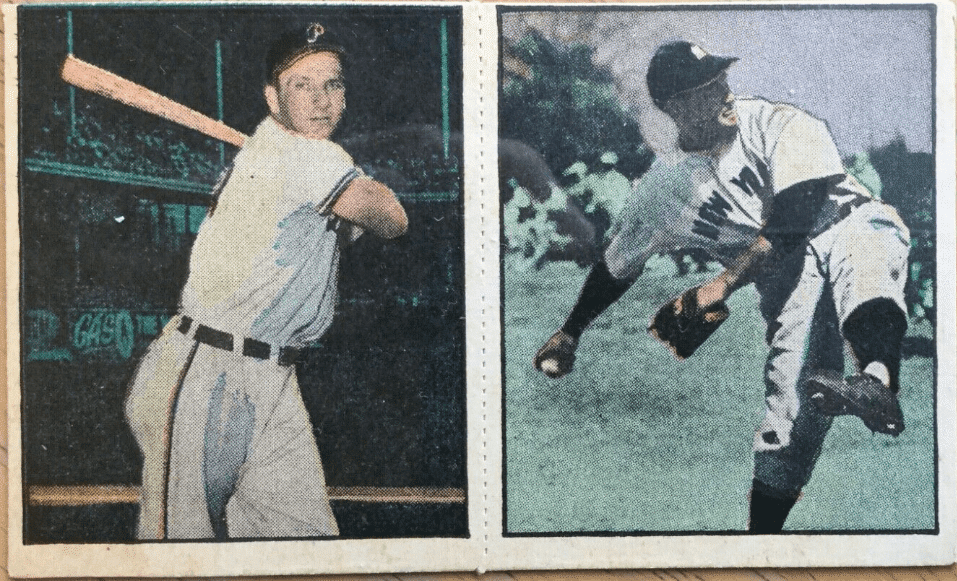 The cards feature a color painting of the player on the front with a white border.  The images are quite crude, thus it’s clear that not a lot of effort went into the production of these cards.  As KeymanCollectibles notes the cards likely used a ‘Photostat’, using the Ross photographs to create the cards:

As previously noted this was a multi-sport set that featured other basketball, golf, boxing and olympic athletes from the era.  Here’s a Bob Cousy from the set which almost feels like it should come with 3-D glasses.  It is notably quite affordable and can be found for less than $200 in Good to Excellent condition. 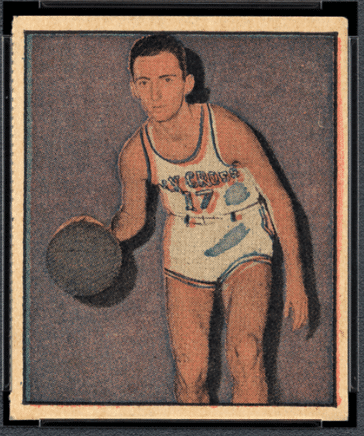 Card backs feature the player's vitals and a single line of statistics from the 1950 season. At the top of the card are the words "Hit Parade of Champions 1951".  Note that the two sets are often referred to as 'The Hit Parade of Champions' set.  The card number and "Berk Ross Inc' trademark are located at the bottom of the 1951 cards. 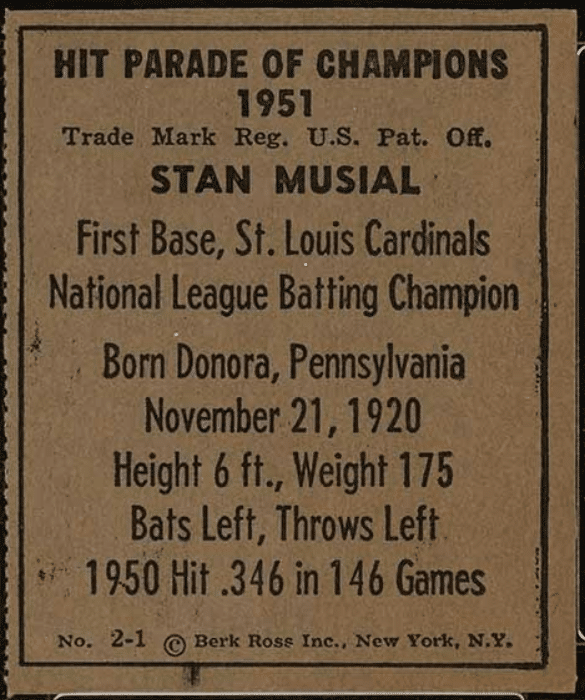 The set consists of 72 cards with 40 being baseball issues.  The set was issued in 4 series of 18 cards each.  Each series is numbered from 1 through 18 and the first 10 cards in each series feature baseball players.

There is also speculation (although not confirmed) that this was a regional issue distributed throughout the northeast, due to its focus on teams that were playing in the northeast states.  In fact, Cardboard Connection notes that complete Berk Ross sets were distributed by several northeast dealers.

Below is the checklist for the 1951 set:

The highlight of the 40 card baseball set is the card of one 'Joltin' Joe DiMaggio.  It's a big card, since neither Bowman or Topps were able to get DiMaggio to sign a deal from 1949 to 1951.  Thus, this further cements the belief that the Berk Ross set was unauthorized. 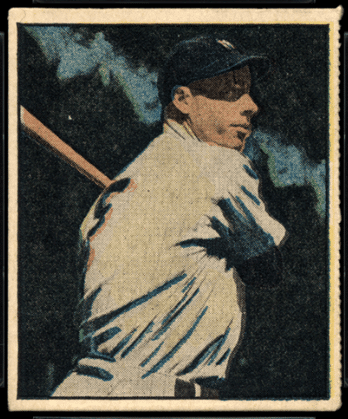 The folks over at WaxPackGods put it best:

And so it is, that the unauthorized production of sports pasteboards nearly 70 years ago yielded the last in-career cards of Joe DiMaggio, as, unrestrained by pesky laws and regulations, Berk Ross included DiMaggio in both 1951 and 1952.

Not only did collectors get their mitts on The Clipper during his last season, then, they were treated to one more reminder of his graceful, twisting swing in 1952, even when they knew he was gone. 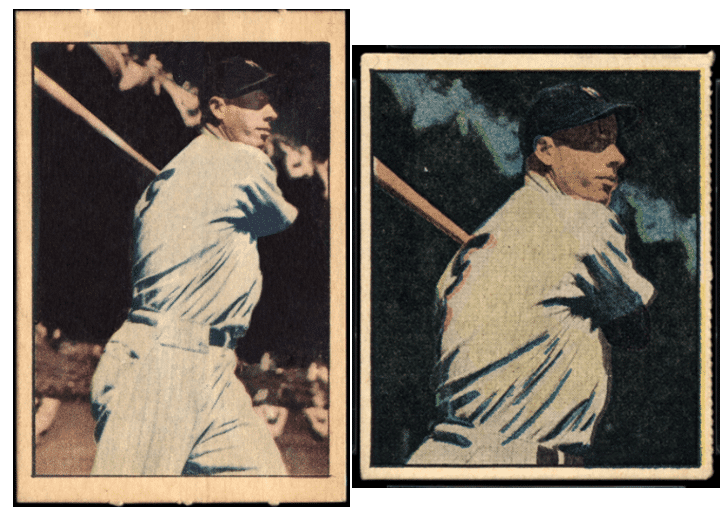 The backs are also not numbered and the cards were issued in packs.  Here's an example of a Berk Ross wax wrapper. 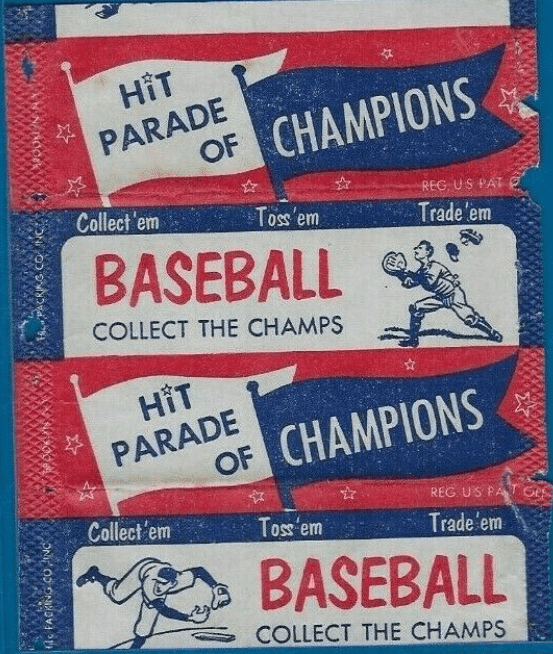 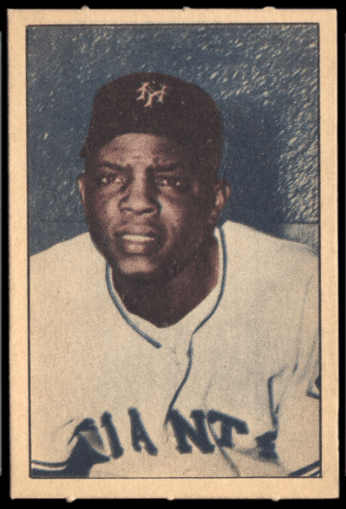 Also interestingly enough, the "Berk Ross Inc." copyright is missing from the bottom backs of the cards.  Was Berk Ross concerned about the legality of its card issue?  Note that this also would have corresponded to around the same time as the popcorn lawsuit. 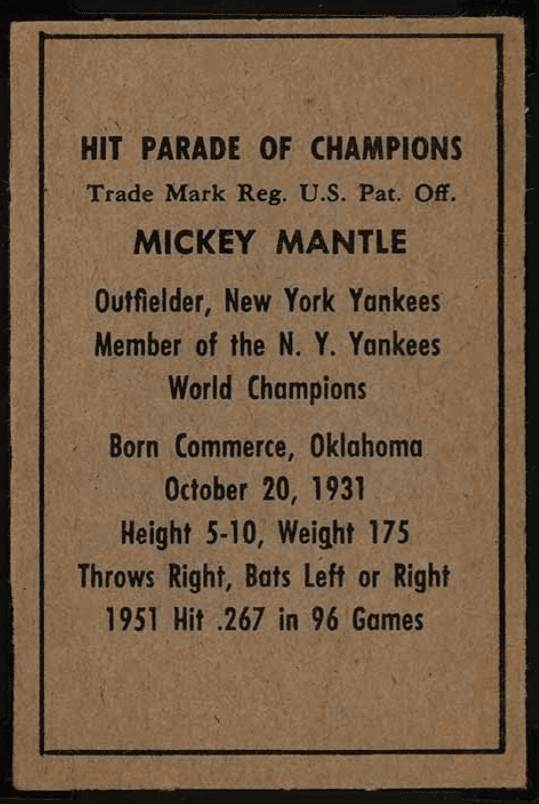 The back of a 1952 Berk Ross Mickey Mantle card

The 1952 set has a bit more star power than the 1951 issue, featuring a second card of DiMaggio, Willie Mays, Mickey Mantle, Jackie Robinson and Ted Williams.  The Mickey Mantle card is notorious for using the same image as his 1951 Bowman issue, hence the reason for speculation that Berk Ross may have been a Bowman photographer.  It is of course a heck of a lot blurrier. 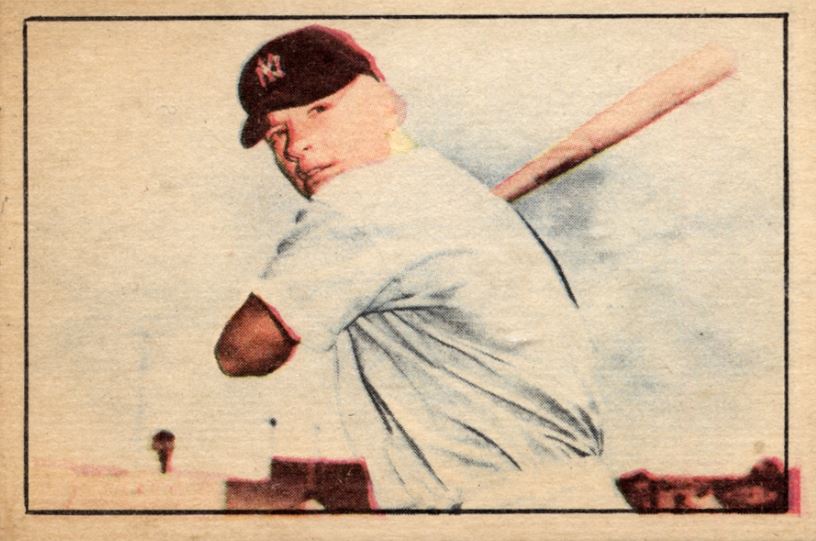 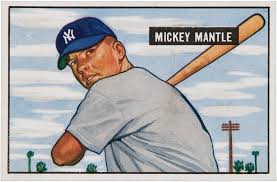 Sure they aren’t as pretty as a Bob Ross painting and aren’t as crisp as Bowman look-a-likes, but it’s when you start to examine some of the available supply is when things get interesting.

As to the 1951 Berk Ross set, PSA has graded 5,084 cards, yet this also includes the non-baseball players.   Amazingly enough in most cases, it seems as if PSA has graded more of the unperforated copies.  Note that PSA also will grade a perforated card with a numerical grade. 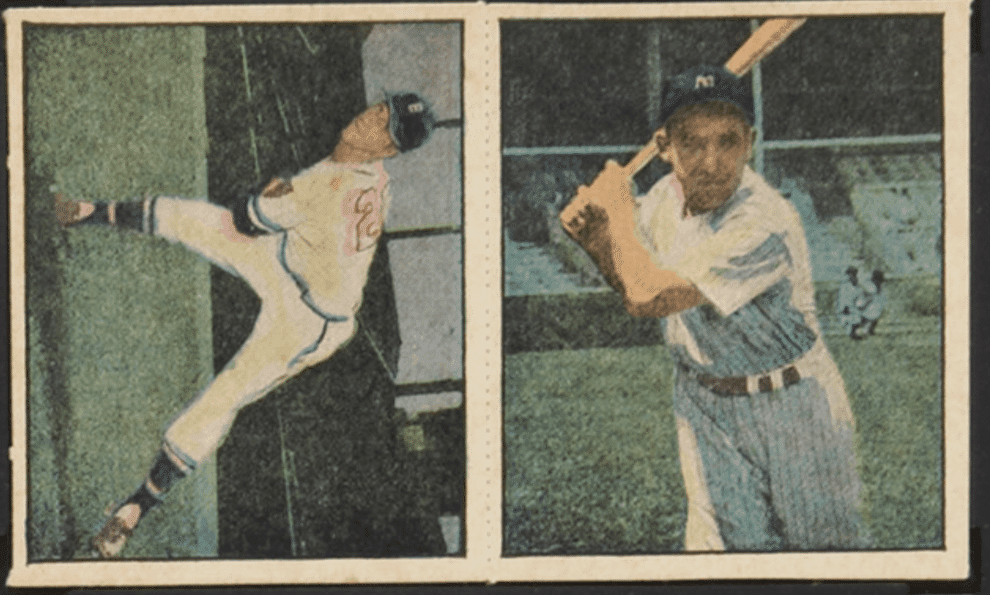 In just looking at the 1951 Berk Ross set, these cards are much scarcer than the Bowman set from the same year or many of the other major national sets from the era.  Let’s take a look at the 1948 Leaf Joe DiMaggio in comparison to his 1951 Berk Ross card.

Sure, maybe the ’48 Leaf is a prettier card and it was issued three years earlier but it’s clear that the Berk Ross cards don’t get a ton of respect relative to their overall scarcity.   The 1948 Leaf card has been graded 1146 times by PSA in contrast to the 212 copies of DiMaggio’s 1951 Berk Ross Card.  And the 1948 Leaf card is worth nearly 9x the value as the Berk Ross DiMaggio. 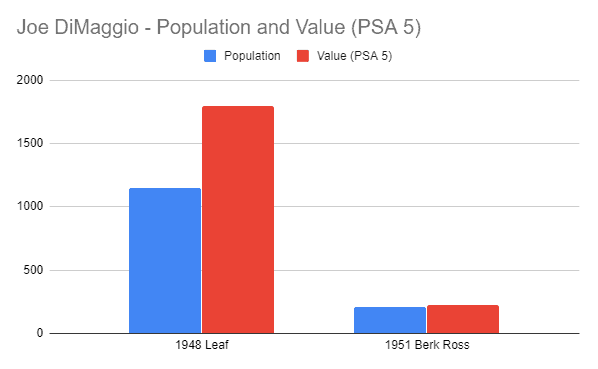 Yet, the Bowman Mantle in Excellent (PSA 5) condition is valued at ~$15,000, whereas a similar graded Berk Ross Mantle is valued at just over $2000.  Is that premium warranted? 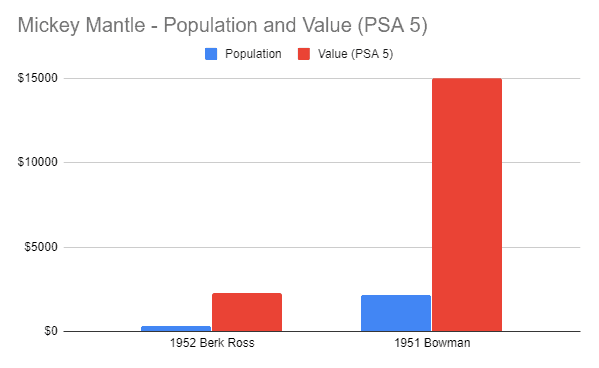 I’ve spoken in the past about how I felt the Berk Ross cards were undervalued.

I named the Berk Ross Mantle to our ‘All Vintage Cards Value Portfolio’.

I also named the 1952 Berk Ross Ted Williams as one of the ‘Splendid Splinter’s’ most undervalued cards.

Thus, despite the increase in attention that Berk Ross cards have received in recent years, I still view the two sets as generally underappreciated and a good long-term investment for collectors.

There are obviously a few stigmas holding back the sets.  One, it was likely an unlicensed issue with little known about its distribution and release.  Second, it might have been a regional issue (which generally excites collectors a little bit less than normal).  Three, the images are ugly and blurry.

If you can get over most of these hurdles, I think vintage collectors can selectively go for some of the players that interest them the most and seek out higher-grade copies.   An Excellent condition 1952 Ted Williams can be found for around $200 to $250, whereas an Excellent condition Willie Mays can be found for close to $750.  Compare that to the value of their Topps and Bowman issues from the same time, along with the relative scarcity and I believe the Berk Ross cards are most definitely an underrated ‘Champion’.