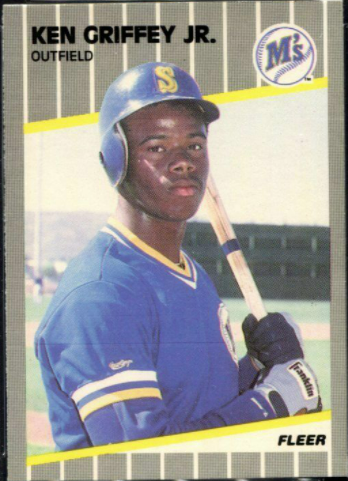 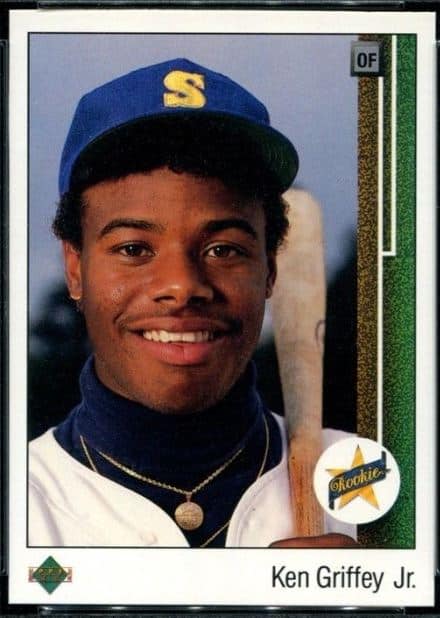 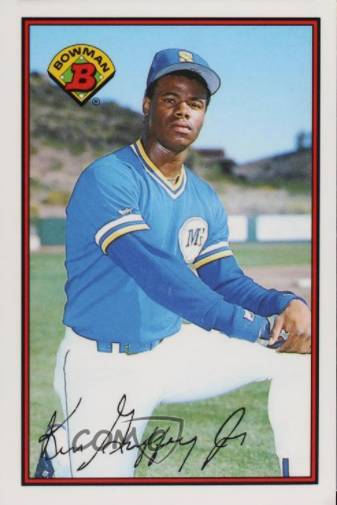 One of the true Griffey rookie card issues, as it was part of a major release from one of the big card manufacturers.

Bowman (owned by Topps) issued a Bowman base set and an identical yet more limited Bowman Tiffany set.

The 1989 Bowman set had a big production run, but the Bowman Tiffany set was printed in limited quantities.

The 1989 Bowman Tiffany cards are identical to the base Bowman issue. The only major difference is that the Tiffany cards have a glossy front and white backs.

Junior's 1989 Bowman Tiffany card is much harder to find. Bowman printed only 6,000 Tiffany sets compared to the high hundreds of thousands produced for the regular Bowman set.

The Bowman Tiffany Griffey rookie card is a good investment, especially given its scarcity relative to his other popular rookie cards.

PSA 10 (Gem Mint) copies of Griffey's Tiffany rookie card sell for around $14,000, as PSA has graded only 156. So, likely out of budget for most collectors.

I like the PSA 9 Griffey Jr Bowman Tiffany card, which has 451 graded copies but sells for a fraction of the PSA 10 at an average price of $1250. 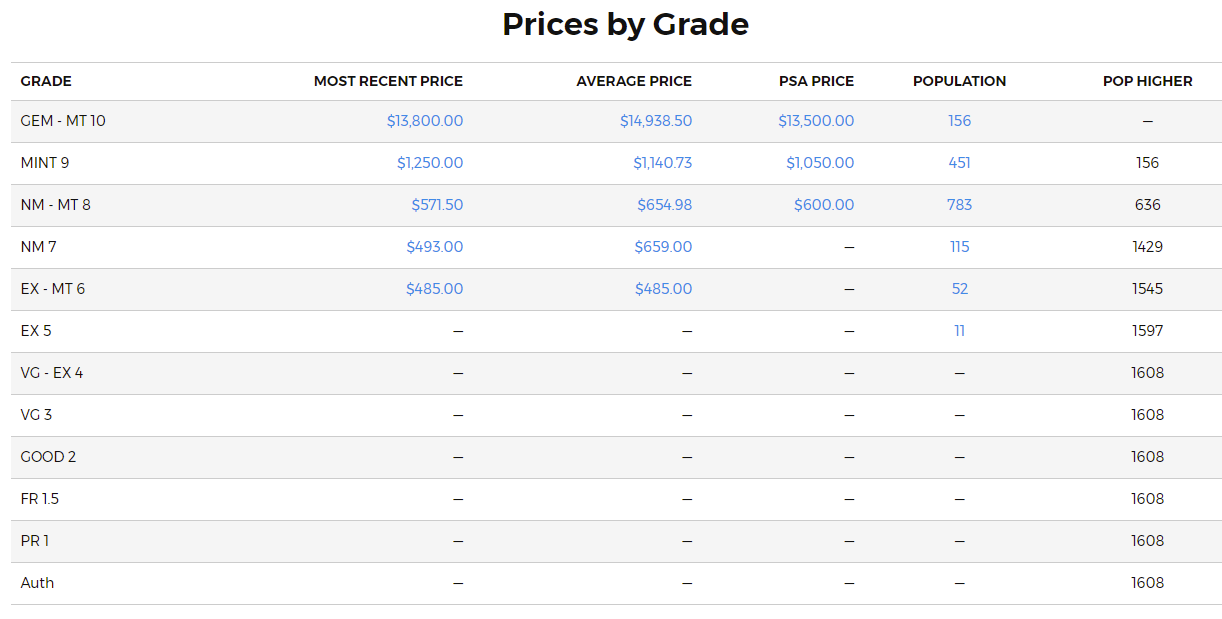 Topps goofed and didn't get Griffey in the 1989 Topps set so they had to create a card for him in the Topps Traded set of the same year. 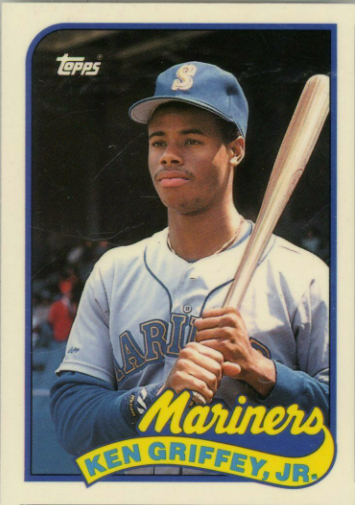 If you're buying to invest, it helps to know the print run of the issue. A huge difference between the unknown production runs of the junk base card sets.

Notably, Griffey's base 89 Topps Traded card was printed in massive quantities - there are over 76K copies graded by PSA!

Sure, it's got a higher POP (over 1300), but given the relative scarcity, it's one of the better values among all Ken Griffey Jr Rookie cards. 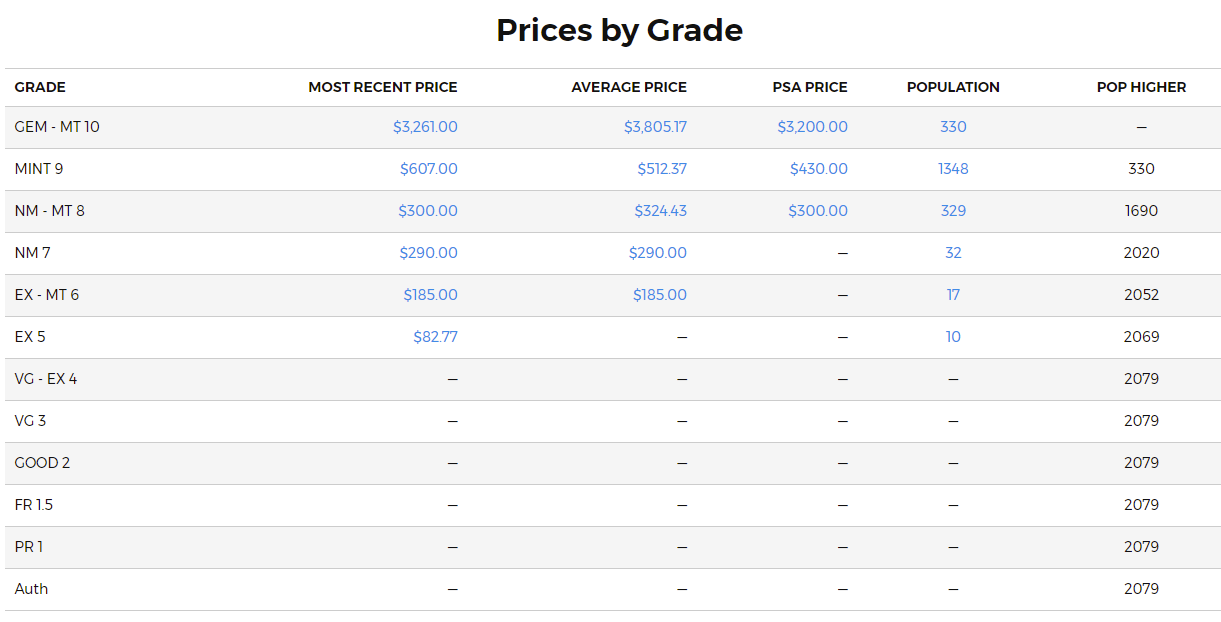 When Upper Deck came to town in 1989 with its snappy, foil packs and premium-designed baseball cards, it changed the collecting game for good.

These new, higher-priced premium cards set the table for what would be a long line of incremental pushes toward higher-end cards in the hobby. And, of course, it worked. Upper Deck's 1989 issue was a smashing success.

As a collector at the time, I can still remember breaking the foil packs apart and praying for a Ken Griffey Junior Upper Deck rookie card. It was THE hobby's hottest rookie card and the 'holy grail' for kids at the time.

*Side note, if you want to read a great story about the Upper Deck company and its mark left on the hobby in the 1990's, check out the book 'Card Sharks', which we listed here as one of the best baseball card books for collectors.

Everyone figured that since Upper Deck looked expensive and cost more, it had a lower print run than the Topps junk...right?

Well, sad to say, but Upper Deck's perception as an issue with a limited print run was more folklore than anything else. I can't say they exactly pulled the wool over our eyes. From an excellent Slate piece in 2008:

More than 1 million Griffey cards were printed. In Upper Deck’s original mailing to dealers, the company said it would sell 65,000 cases of card packs. With 20 boxes in a case, 520 cards in a box, and 700 different cards in the set, there would be about 965,000 of each card produced for the boxes. Combine that number with the amount of Griffey's in the untold number of “factory sets,” and you’d have your production run.

In examining the PSA Population reports for the 89 Upper Deck Griffey, there is no doubt that the card was printed in fairly massive quantities.

PSA has graded over 85,000 copies of the Upper Deck Ken Griffey Jr Rookie card , making it the most graded of all his rookie cards, even his Donruss and Fleer rookies.

A PSA 10 Griffey Upper Deck rookie is very hard to come by, with only 3990 (4.7% of the population) graded by PSA. Graders are very strict, especially on the back hologram on the card. If it isn't centered and unscratched, there is zero likelihood of a 10. Back of the 1989 Ken Griffey Jr Rookie Card. Graders are very focused on the condition of the holgram on the back and will not award a high grade if its scratched or way off center. 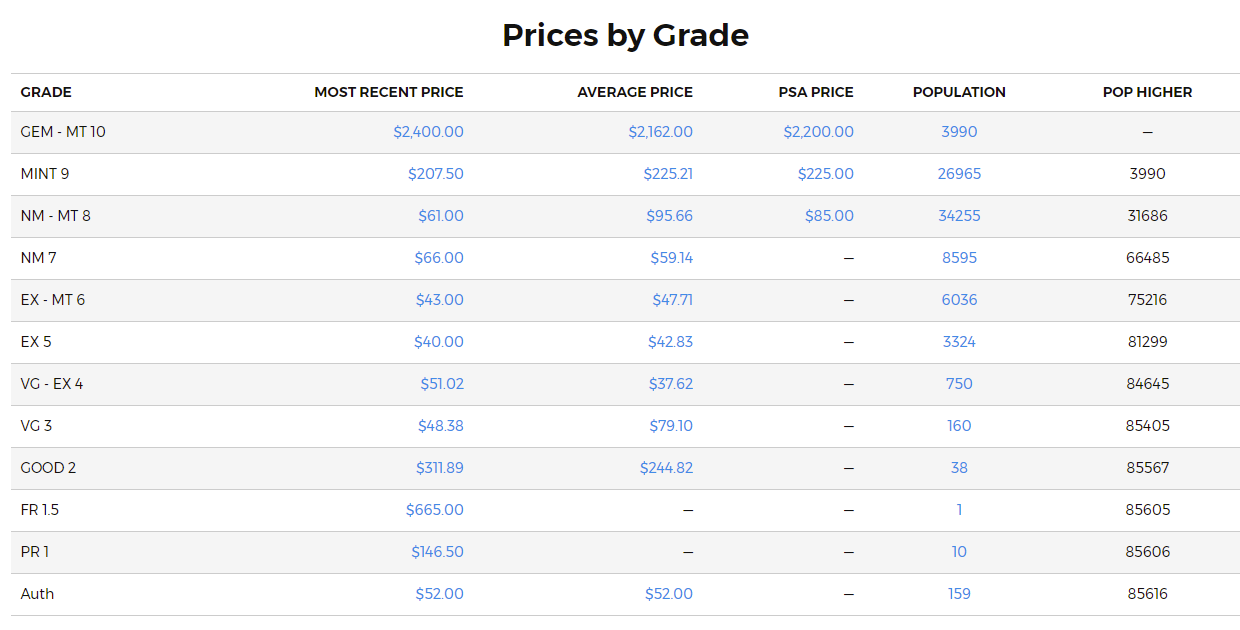 Like his Bowman Tiffany card, the 1989 Fleer Glossy Ken Griffey Jr rookie card offers collectors a rarer version of a base, junk set.

However, based on pop reports, the Fleer Glossy Griffey card has a low supply: only ~1800 graded copies. And a PSA 10 (with an existing population of 118 cards) is selling for $3600.

Note the limited quantity of the Glossy version versus the 1989 Fleer base Griffey which has 55K PSA graded copies!

A PSA 9 which has over 600 copies graded sells for $375 and might be a more attractive option for collectors looking to budget.

Investing in a card with such massive quantities (in the 1 Million + range) is hard, but I must list it here. It remains one of the most recognized Ken Griffey Jr rookie cards.

The card has 37,000 PSA-graded copies and that does not count the endless supply of junk wax rotting in warehouses out there.

But with iconic baseball cards like this, you can look towards the Gem Mint PSA 10 cards as a potential investment. 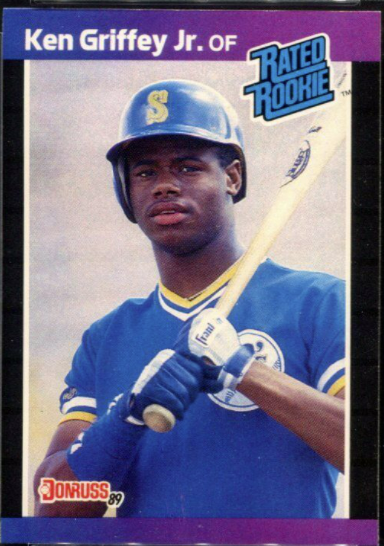 There are nearly 2000 PSA 10 Gem-Mint Donruss 'Rated Rookie' Griffey Jr cards and each one is gonna set you back $400.

Step down to a PSA 9 and it's a big difference, only $30, more than it costs to grade a card with PSA nowadays.

SIDE NOTE that's an interesting factoid--is there some sort of graded card arbitrage when the price of the graded card is well below the costs to grade? 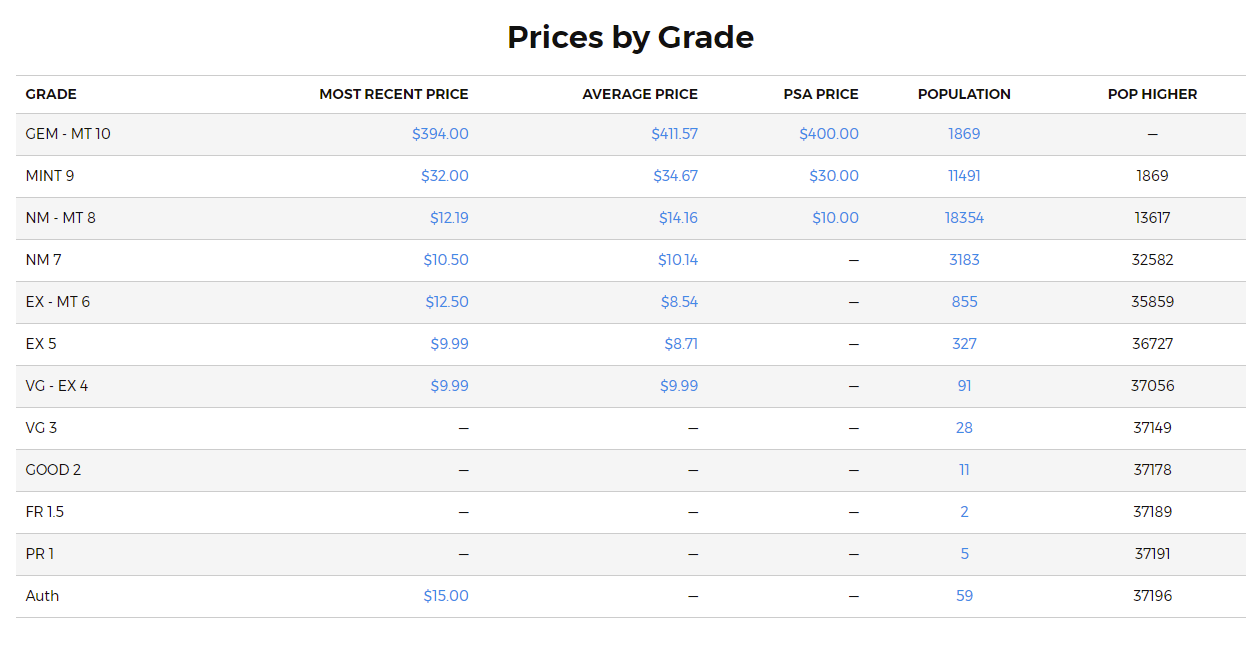 For the last card on this list, I went with Griffey's earliest released pre-rookie minor league card.

I think if you want to invest in any Griffey Minor League rookie card, this one is a good choice. 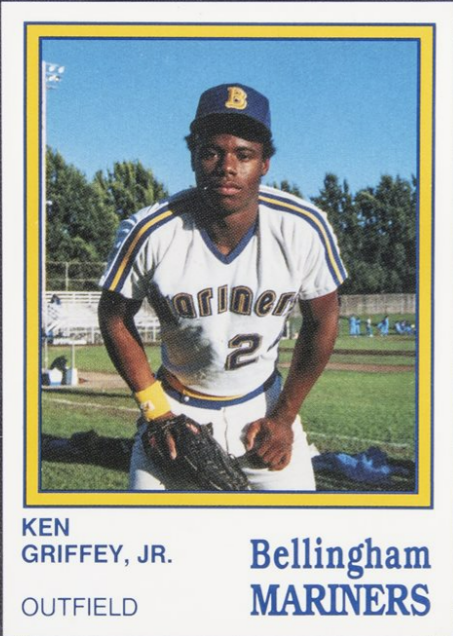 The sets were issued by the Bellingham Mariners and according to PSA, there are 3000+ graded copies.

A PSA 10 copy of the card can typically be found for around $500, and less than 800 have been awarded the prestigious PSA Gem Mint grade.

See below for Griffey's Most Popular Rookie cards and the corresponding values and cards graded in PSA 10 (Gem Mint) grade. The most valuable card is the 1989 Bowman Tiffany. The 1989 Bowman Tiffany Griffey Jr Rookie Card is his most valuable and hardest to find in a PSA 10 grade.

Appearance wise, the Bowman Tiffany Griffey Jr rookie is identical to his base Bowman rookie, yet the front has a glossy coat, and the back is a lighter color.

The Bowman Tiffany Rookie card now sells for near $14,000. Budget minded collectors can opt for the card in a PSA 9 grade, which sells for roughly 1/10th the price.

Some might not consider it a baseball 'card', but Griffey's rarest rookie issue is the 1989 Topps Test Heads Up card.

The odd cards featured cutouts of a player's head with a suction cup on the back meant to stick on surfaces. 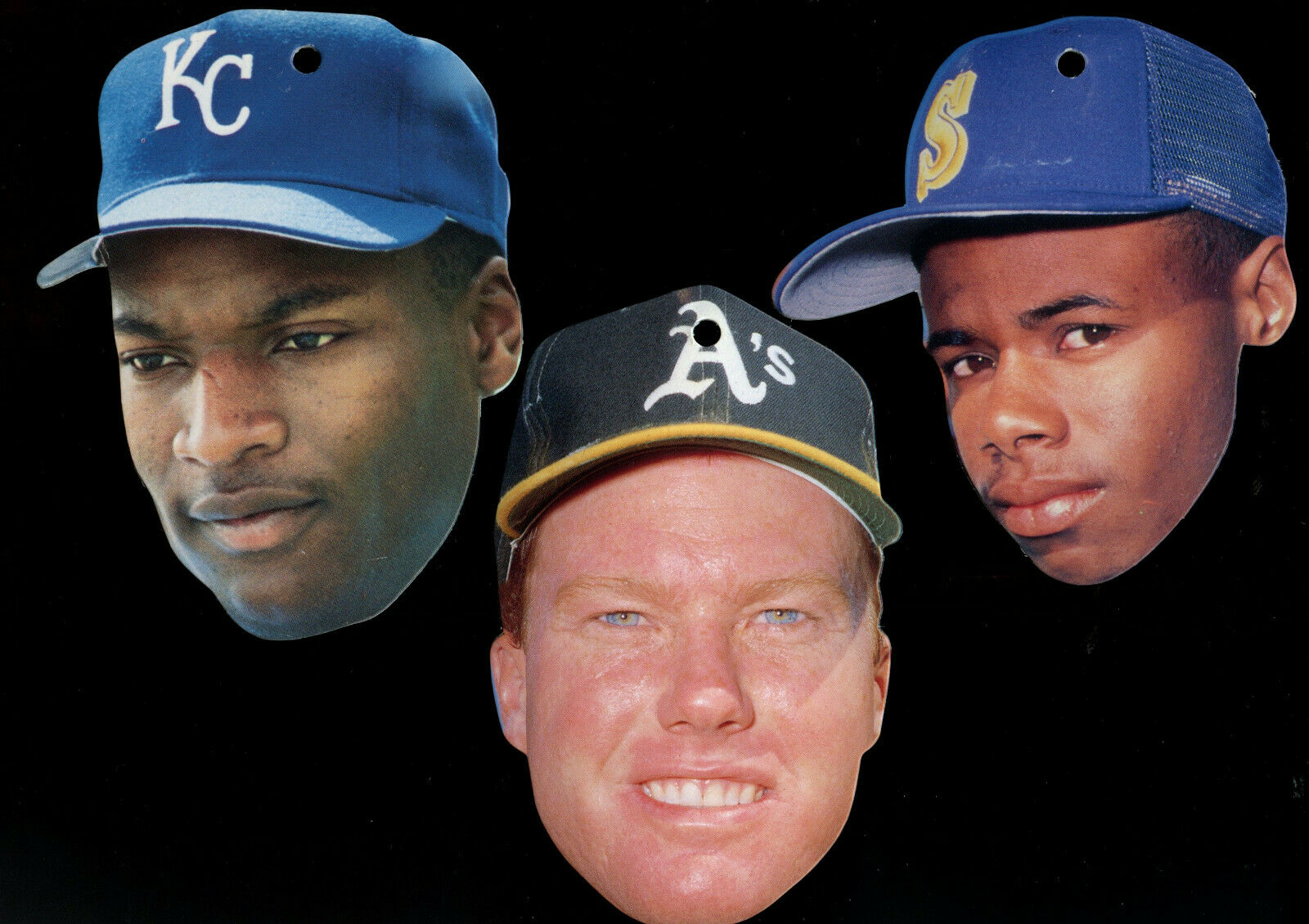 Now, there was a widely available issue of the Topps Heads Up baseball cards in 1990, but in 1989 Topps tested the product. And folklore has it that few were distributed. Here's a great writeup from the Collectors Universe forum:

Legend goes that the release was test marketed to a couple of stores in the Pennsylvania area and that an estimated 24 total boxes were produced that contained 24 single item packs inside, thus making it one of the most elusive and rare items ever produced by Topps

PSA has graded only 17 of the 1989 Topps Test Heads Up Griffey Jr cards, and the last sale was back in 2000, for under $1000. Given the legend and rarity of these cards, I'd guess that a sale today would net in the many thousands of dollars, dependent on condition.

There are only 1600 PSA graded copies; a pittance compared to the massive graded populations of some of his other mainstream rookie cards (Fleer, Donruss, Upper Deck).

Regarding PSA 10 graded cards, the 1989 Fleer Glossy Griffey Junior rookie card has the lowest count. Only 118 copies, versus the 1989 Bowman Tiffany Griffey PSA 10 which has over 150 copies.

Ken Griffey Jr was one of the best to ever play the game and common sense tells us that his rookie cards SHOULD be an excellent long-term investment.

He's already made the HOF so the clear catalyst for a surge in value isn't there, but there's enough collector demand to keep values stable.

However, we must consider the massive quantities of supply for many of his cards, and as an investor focus in on those with more limited supplies. 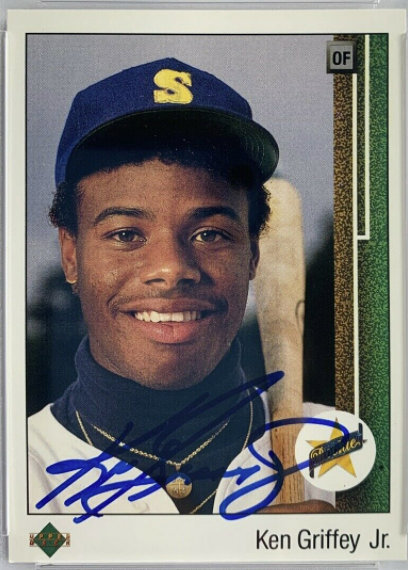 Also, consider a Griffey Jr autographed card as a good alternative. There are plenty up for sale on eBay and many fairly affordable if you shop around for a bit.

Ken Griffey Jr. As A Player

Ken Griffey Jr. is one of the most iconic players in baseball history.

He made a name for himself as not only an incredible hitter but a tremendous defensive outfielder. 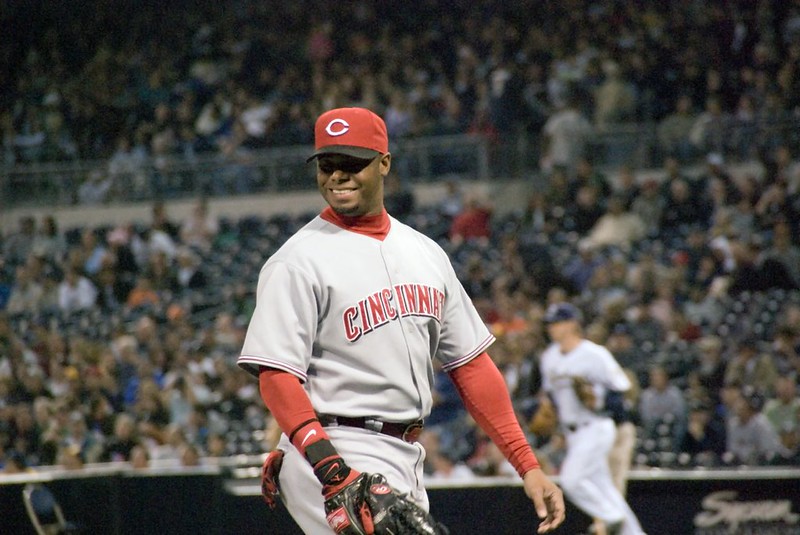 From the outset, Griffey was destined to play baseball.

As a kid, he grew up hanging around the clubhouse of the Cincinnati Reds, where his father, Ken Griffey Sr played as a part of the "Big Red Machine".

He got his start at Archbishop Moeller High School, (also the launching pad for one Barry Larkin) where he excelled at baseball and football.

It was no surprise to anyone when the young Griffey, groomed to replace his old man, was drafted by the Seattle Mariners with the #1 Pick in the 1987 MLB Draft.

Griffey's first years in the minor leagues didn't go exactly as planned. While he dominated the Northwest League, he also faced racial issues and a lot of pressure to succeed, nearly taking his own life. 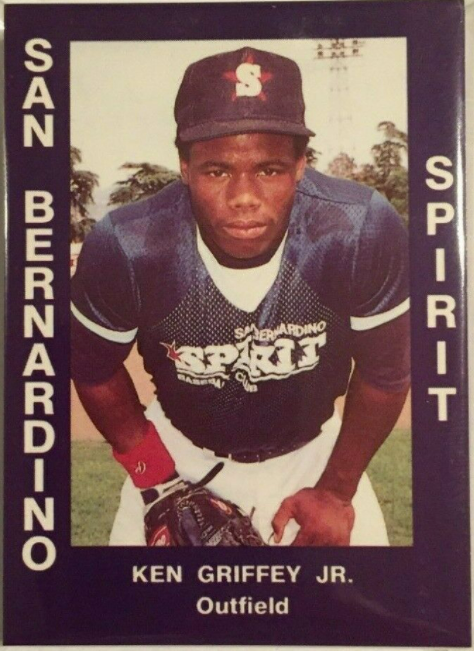 But, Griffey turned it around, joining the Seattle Mariners in 1989, bringing hope to one of the league's most beleaguered franchises.

In his twenty-two years with both the Seattle Mariners and the Cincinnati Reds, Griffey amassed 630 Homeruns, good for seventh-best all-time.

But not only was Griffey an amazing player but he was well respected by his teammates and coaches alike.

His father early on had taught him the importance of humility.

“Junior was one of those athletes born every 30 or 40 years with that special talent. Playing with and being around him was such a privilege because I got to know not only a great baseball player but a good teammate who was always so secure about what he was doing.”

Ken Griffey Jr was elected to the Baseball Hall of Fame in 2016. Here's a look at his induction speech...warning, a dry eye might not make it through this one alive.

Here's a look at some of Griffey's standout performances over his career:

Below is a checklist for all of Griffey's Pre-Rookie and Rookie Cards.

Pre-Rookie are those cards issued when Griffey was still playing in the minor leagues.

Many of the Griffey pre-rookie card releases are not what I would consider 'true' rookie cards, especially those not part of a major issue, like the Star cards or Mother's Cookies, but given the 1999 release, I list them here for reference.

Note that if you want a spreadsheet with PSA Population links for each card, please feel free to use this Google Sheet here.