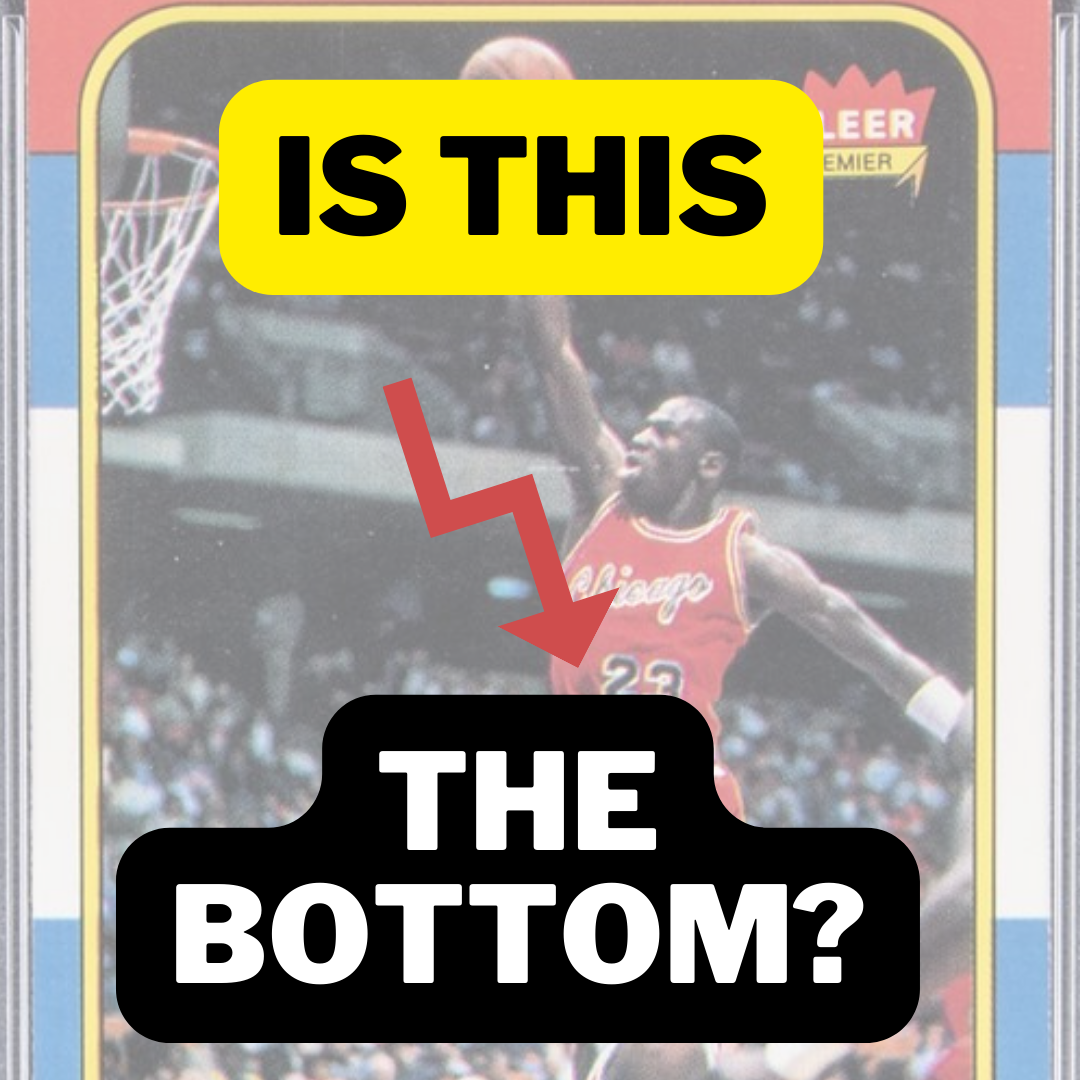 Covering everything from authentication (here and here), to fake Jordan’s in fake flips, to different PSA grades, investment potential, even scandals involving the Jordan rookie card.

To me, especially since I grew up opening packs of 86 Fleer basketball cards, it’s one of the most polarizing cards in the hobby.

But, over the last year or so, prices on the Jordan rookie card have fallen off a cliff.

Plus, we are seeing many similar excesses wrung out in other speculative areas of the capital market (high growth stocks, bitcoin).

Card prices can’t go up forever, and sometimes a correction is warranted. Helping to restore sanity to a market, where rational thinking can take over.

In this piece, I dive deeper into the rise and fall of the Jordan rookie card, trying to determine what the future holds. 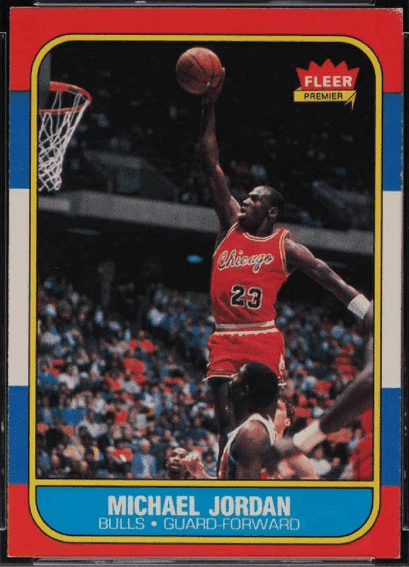 I've said it before, and I'll repeat it. The Michael Jordan 1986 Fleer rookie card is not rare by any means.

In the card business (or any business), when a good is traded between a buyer and seller, the item's scarcity helps determine the selling price.

We've seen a lack of new cars coming to production in the car business because of a shortage of semiconductors (aka chips).

Here's a chart of Used Car Prices over the past year, which have increased by nearly 40%!  More car buyers are chasing tight supply = higher prices. 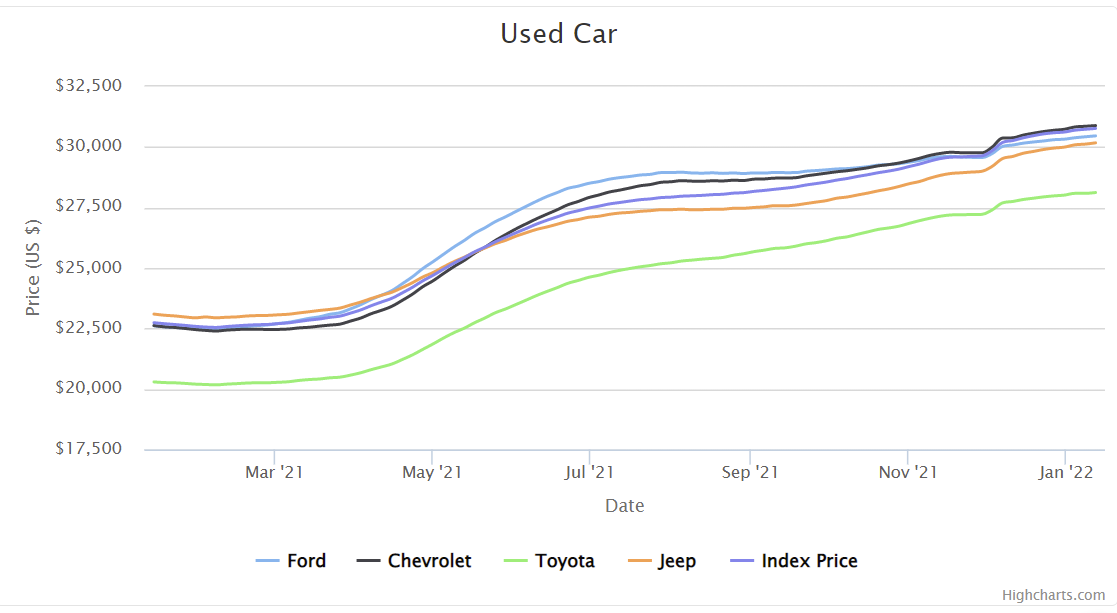 The fundamentals that determine pricing in the baseball card business aren't EXACTLY the same, but it's more or less the same principle.

It all comes back to Supply and Demand. If there are more collectors looking to buy a specific card than there are sellers, the prices will ultimately increase.

If there are more collectors selling versus buying, then the card price declines as the sellers adjust to tempt potential buyers.

And the Jordan Rookie card has provided a textbook example of how the supply and demand dynamic works in the card business.

So Why Did Jordan's Rookie Card Go Up So Much?

I've explained this before, but it comes down to many factors. First, there was a lot of hype running into ESPN's 'Last Dance' documentary.

It brought Jordan's greatness back into the spotlight for a younger generation. This also coincided with the early innings of a boom in the card market.

And, then COVID hit in early 2020, leading to lockdowns with people stuck in their homes, armed with stimulus money in their bank accounts.

Mr. Money Mustache wrote one of the best articles I've read on inflation of late. Well worth a read and essential for this discussion are his comments on the boom mentality over the past few years:

"Until March 2020, when the entire world conducted an unprecedented experiment:

Item (1) is still having ripple effects: as different governments impose and lift lockdowns and quarantines, factories and shipping ports are still not up to full speed.

Then item (2) multiplied those effects because we were all stuck at home with extra money, meaning we spent less on restaurants and more on stuff from Amazon, appliances, new cars, and so on. "

It is possible that the card market was in the early innings of a secular boom pre-COVID, but COVID is the accelerant that got the flame to spread like wildfire. 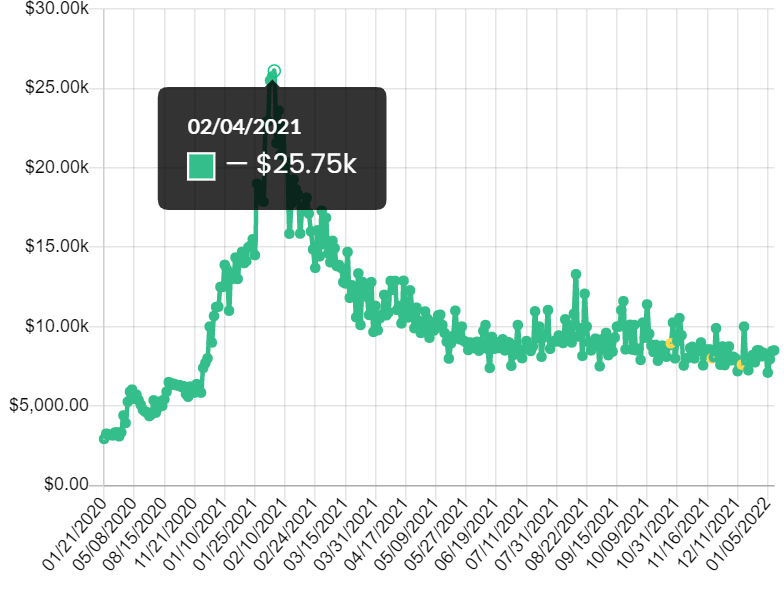 This was in the midst of the harshest lockdowns and when stimulus money was hitting bank accounts. Also, the Last Dance documentary came out in April of 2020.

So a lot happening to help support this monumental move.

How in the world did this card jump by so much in such a short period of time?

Momentum can act in funny ways, but in my mind, the excessive prices were driven by some high-profile card auctions (notably Goldin) that saw PSA 10 Jordan rookie cards continuing to eclipse previous records.

Looking at auction sales of PSA 10 Jordan Fleer rookies in early 2021; nearly all were via Goldin (and Heritage), with the peak in late January at a whopping $738,000. 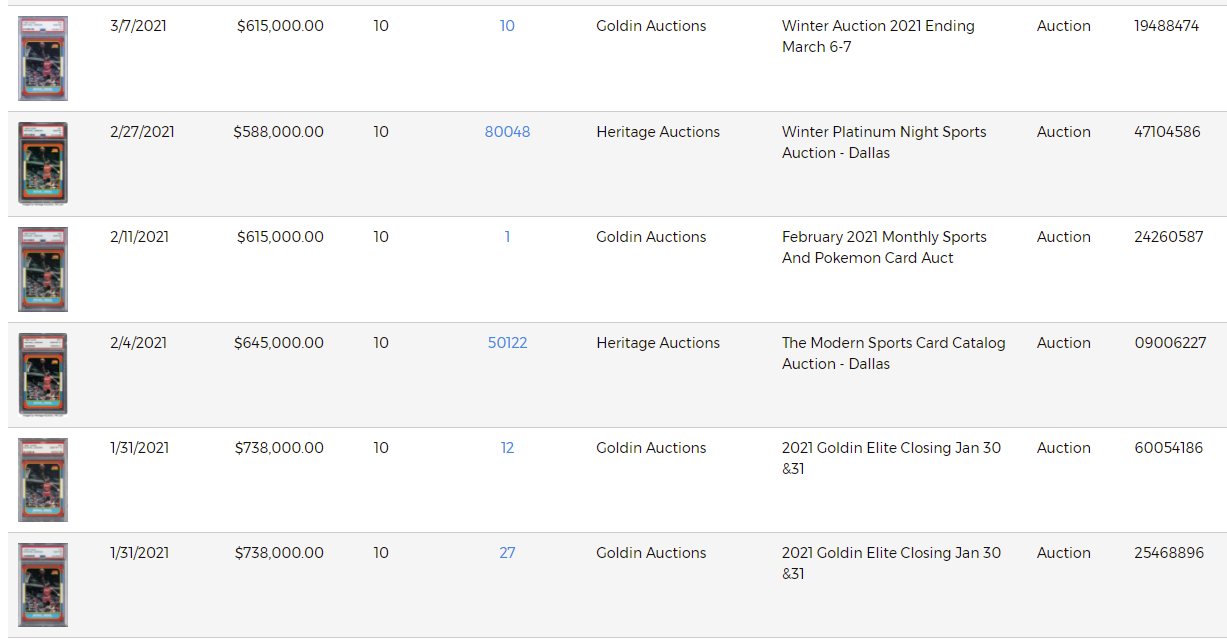 I've been stressing this for a while, especially as pricing on the Jordan rookie went bananas in early 2021.

The Jordan rookie card is not rare. Sure, it's rare compared to some of the late 80's junk basketball (Hoops, Skybox, etc), but in terms of overall scarcity, the card was well produced by Fleer.

I wrote this article discussing the investment potential of Jordan's rookie card back in May 2020 (when the PSA 8 Jordan was at $5800). This is what I had to say:

Guys, i love the Jordan rookie, but I think it might be getting a bit bananas....Look, I could very well be off here and the Jordan Rookie card might increase by another 200% over the next year, it's very well possible.  I'm just saying to be careful out there, you're paying a huge premium on a card that isn't all that scarce..I'm confident that nearly 90% of the people buying Jordan's right now and driving up the price also have zero idea what the existing Jordan rookie population looks like.

Not only did the Jordan rookie card increase by another 200%, but it also moved higher by over 400% to the peak price of $26,000 in early 2021. So, hopefully, you didn't listen to my advice, but well, we've almost retraced all those gains

Back in May 2020 when I wrote that piece, the existing graded population for Jordan Fleer rookies was 31,648 copies. Here's the breakdown at the time:

There was a very noticeable increase in the graded pop for Jordan's rookie across the board. Today, there are over 38,000 graded Jordan rookie cards, an increase of over 6,500 over the past year.

Current Jordan Rookie Prices, What Does The Future Hold From Here?

Here's a snapshot of current pricing from the latest auction results on PSA graded Jordan rookies. PSA 10 Jordan's are still holding good value, but down nearly 50% from their peak in early 2021.

PSA 9 Jordan rookies have declined even more, dropping 70% from the peak to the current price at $27,000. 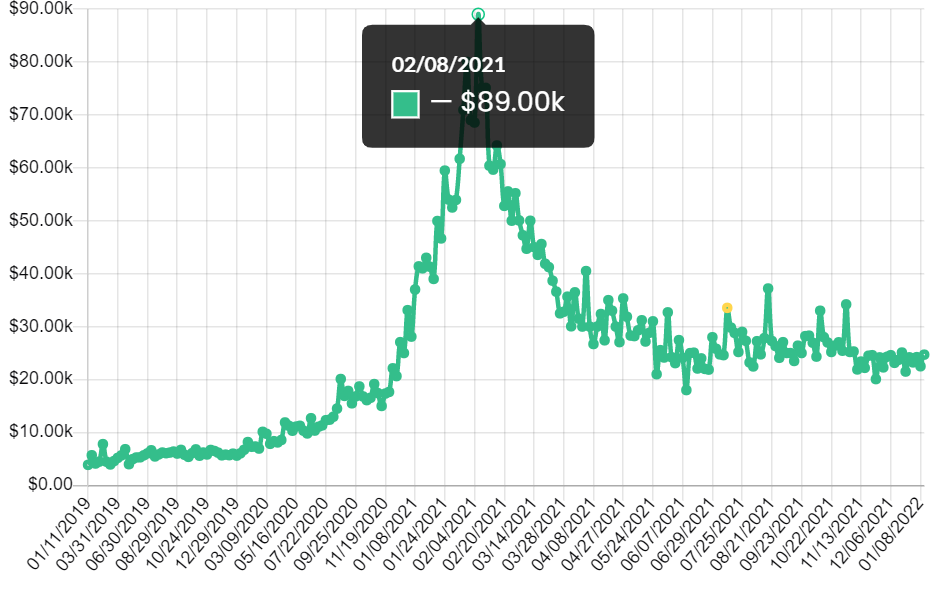 I should note that PSA still carries a near 30% premium to both SGC and Beckett Jordan rookie cards. Here's a chart showing pricing on all three (PSA green, SGC blue, BGS purple) - notably they all have moved in the same direction.

Is it time to load up on Jordan rookies?

Usually, for a card with a low population (typically older, more vintage cards) that have experienced such a drop of this same magnitude, I'd say, it might be a buying opportunity.

Yet, it's the SUPPLY situation here that prevents me from giving the signal to push the chips all in.

Yes, I still expect solid demand for Jordan rookie cards. There are still a lot of buyers that missed that big run up in price.

But, let's just think through this for a moment. Jordan rookies and the rest of the card market were most certainly helped by the availability of free money, either stimmy checks or low cost loans.

Rates are moving higher and inflation is back in the picture. Cards might not be the affordable luxury that we all once had.

If our paychecks remain stagnant and we're paying more for rent, clothes, gym memberships, or groceries (have you seen the price of steak or eggs lately?), collectors might pull back the purse strings on their card purchases.

And most certainly they aren't going to empty their wallets for a card that has seen a 70% drop in many instances. Because, well, that's just Behavioral Psychology 101.

Thus, in order for Jordan's rookie to move higher, there needs to be some sort of catalyst. But, I'm not sure there's anything on the horizon that's going to fuel the card value higher.

BUT, that's not to say that a Jordan rookie card here might not be a great investment.

However, I'd expect future returns to look more like a slow drip from a faucet as opposed to the skyrocketing returns experienced last year.

What do you think? Are you buying or selling Jordan rookies?

Let me know in the comments section below.