When talking about the most recognizable and most valuable cards in the hobby, the 1968 Topps Nolan Ryan Rookie card is near the top of the list.

Ryan was one of the greatest pitchers to play the game of baseball, and from an early age, he was wowing scouts with his fastball.

While he often gets left out of the Top 10 lists for pitchers due to his less-than-stellar control (Ryan averaged nearly 5 walks per 9 innings over his career), his record as the all-time strikeout leader speaks for itself. Ryan's seven no-hitters are also a major league record.

In this piece, we'll review the career of one Lynn 'Nolan' Ryan Jr. while examining his 1968 Topps rookie card, including the existing population, current values, and investment potential.

Koosman himself was actually a very good pitcher and finished with 222 wins and a very respectable 3.36 ERA. 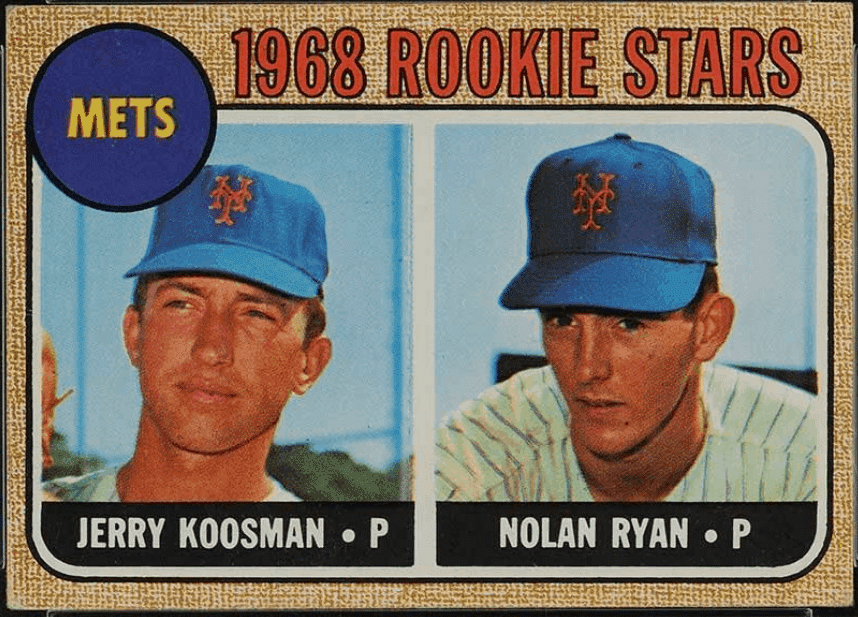 The Ryan Rookie card is the top rookie and most valuable card in the 1968 Topps set.

The back of the card features a brief biography for both players, and notes Nolan's remarkable 1966 rookie season in which he struck out 313 batters with Greensville. Back of the Ryan/Koosman 1968 Topps Card

How Much Is Nolan Ryan's Rookie Card Worth?

This set the bar quite high for a gem mint copy of the card.  To note, PSA has graded only one PSA 10 - Gem Mint copy, hence the likely reason for the significant premium for the card. 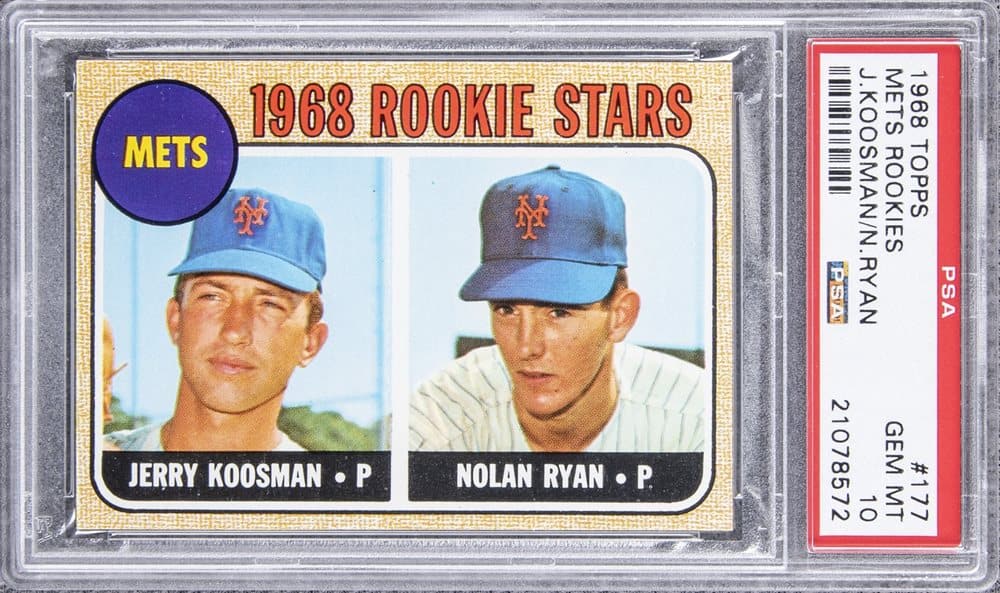 Of course it isn't going to look quite as pretty as that PSA 10!

Here's what a VG condition Ryan rookie tends to look like on average: 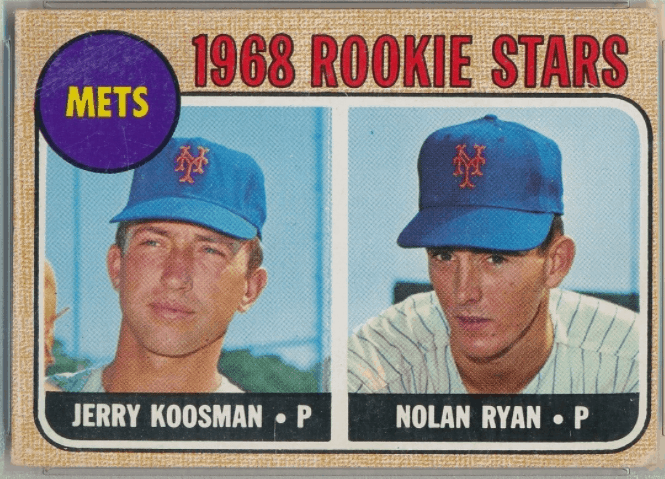 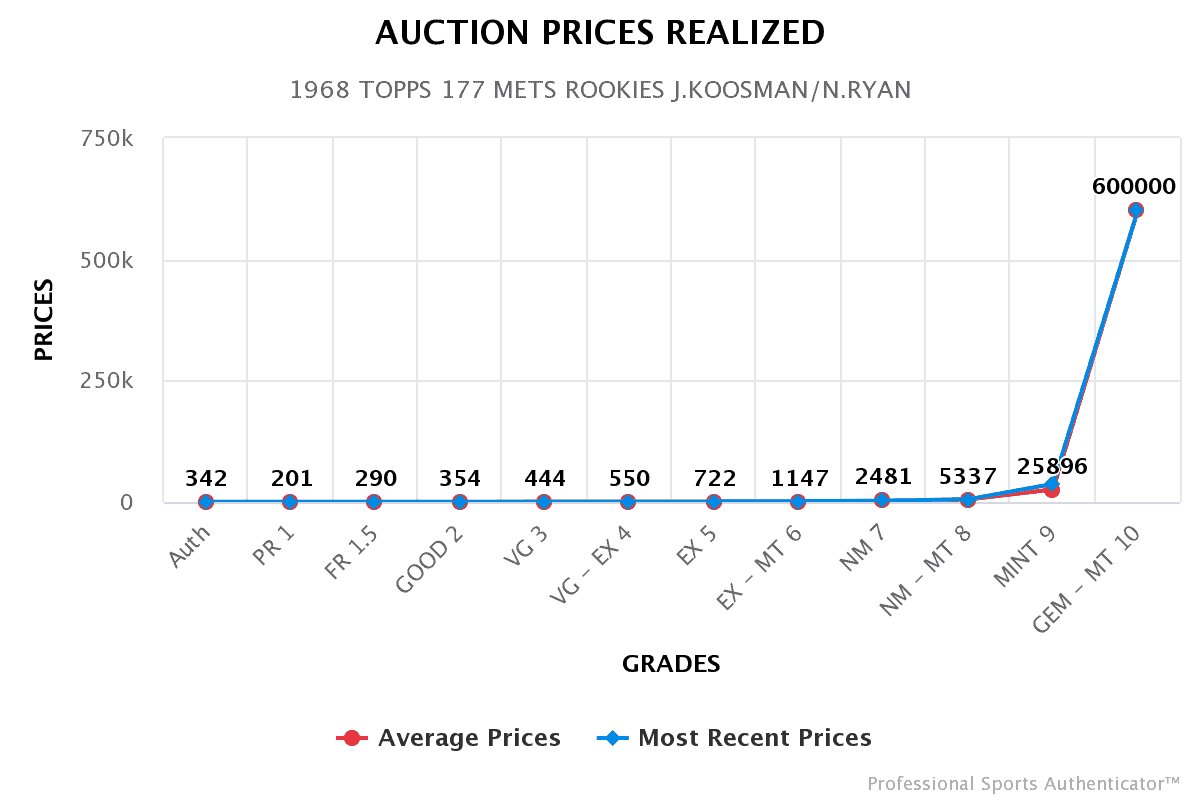 Readers should also be aware that there are three other Nolan Ryan Rookie card variations.

These include a Milton Bradley, O-Pee-Chee, and Venezuelan Topps Nolan Ryan Rookie card.

Each card is identical in appearance on the front, which makes distinguishing between the four cards a bit of a challenge.

Here's the back of a Venezuelan Topps card, which is the rarest among all the Ryan Rookie cards; PSA has graded less than 40 copies. This one is easily distinguished due to the 'Venezuela' text at the bottom of the card. As for the Milton Bradley rookie card variation, this one can be a bit more challenging to tell. From the PSA website:

"The Milton Bradley card exhibits a brighter yellow color on the reverse and will sometimes feature a thin white line on one or more edges, which carried over from the white-bordered football and hot rod cards included on the same sheet." PSA has graded less than 200 of the O-Pee-Chee Ryan Rookie cards.

Like the Venezuelan Topps Ryan rookie, the OPC Ryan can be distinguished by the copyright section at the bottom of the card. On the OPC Ryan it says 'PTD in Canada'. I've seen sales on eBay for an autographed Nolan Ryan Rookie card averaging about $1000 or more. This certainly depends on the condition of the card and whether the card itself has been graded.  Here's a nice one that recently sold for $1200: 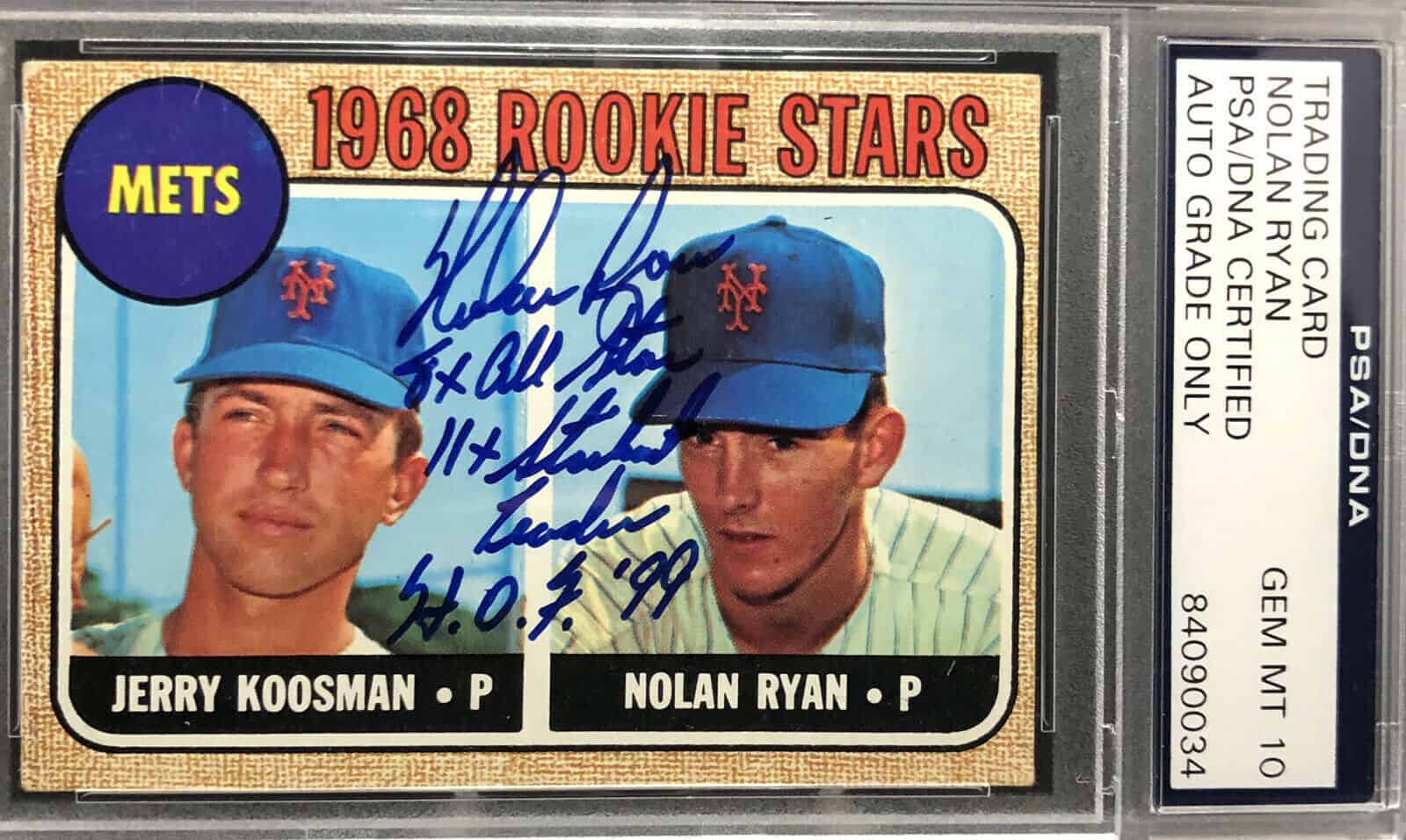 As shown, it's a clean, crisp auto with a HOF inscription.  The autographed cards sell for more if the clarity of the autograph is highly intact.  Some are willing to pay more for varying types of inscriptions, but some buyers prefer a regular signature.

Ryan has been a reasonably frequent signer over time, so these are relatively easy to find, but Ryan is now in his early 70s; thus, it's hard to say how many signings he will be doing soon.

Given the wide availability of Ryan's rookie card, hunting down a nice autographed copy is a great way to have a more differentiated item. An autographed Ryan rookie is a better overall investment than a lower-graded copy of the rookie card. 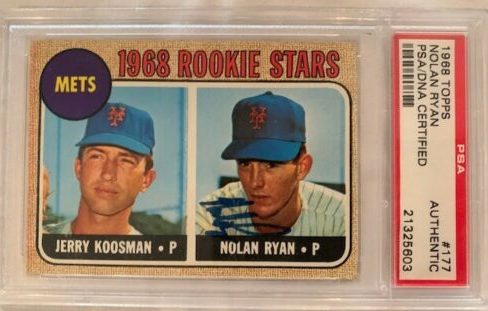 This Ryan autographed rookie card sold at a discount due to the smaller autograph and the poor placement and lack of clarity in Ryan's autograph.

Nolan Ryan's rookie card remains one of the cornerstone rookie cards for vintage baseball collectors. However, its wide availability makes it less of an exciting investment from my perspective. For those looking for a better investment angle, I'd steer more toward the rarer OPC, Milton Bradley, or Venezuelan Topps rookie cards or, even better, find an autographed Ryan rookie. Those have better long-term investment potential.

Of course, if you have any questions on the Ryan rookie card, please feel free to email me at chris@allvintagecards.com

Lynn "Nolan" Ryan Jr. has always had a calm demeanor, derived early on from Ryan's struggles in school. Ryan had dyslexia and a lisp, which led him to poor school grades.

However, there was one certainty among all his struggles--Ryan had a natural talent for sports, especially baseball. Early on, he dreamed of being a star pitcher like his idol, Sandy Koufax. But Ryan also wanted to attend college and had grand plans to earn a basketball scholarship.

Yet, Ryan soon realized that baseball was his true calling.

No one could hit Ryan in the early days, and he was a standout success in high school, although control issues were a big problem. Most who watched Ryan knew he had talent, yet they were concerned about his size and ability to succeed in the big leagues.

However, several scouts, notably those from the Mets scouting team, had zeroed in on Ryan's immense talent. Red Murff, a scout with the Mets, is believed to have discovered Ryan and was in awe of his pitching prowess.

"This skinny high school junior HAS THE BEST ARM I'VE EVER SEEN IN MY LIFE.  This kid Ryan throws much harder than Jim Maloney of the Cincinnati Reds or Turk Farrell of the Houston Colt 45's.”

Scouting card of Red Murff, a former MLB Scout who discovered Ryan for the Mets (from 'The Making Of A Pitcher')

Ultimately Ryan was drafted by the Mets, although only in the 12th round, as size issues kept down his draft position. He would go on to dominate the Mets farm league, first in A ball, where in his first year in the minors, he notched 272 strikeouts in 183 innings.

The following year in AA, he was in the middle of a no-hitter when his coach told him the struggling Mets had called him up, and he had to leave mid-game.

Thus, Nolan Ryan's actual rookie year was in 1966 with the New York Mets.

Ryan was not an early success with the Mets. He joined the team in 1966 as the second-youngest player in the league. An injury and a stint with the Army Reserve in 1967 led to Ryan missing the season.

The Mets had a solid pitching staff (led by Tom Seaver), and Ryan had trouble cracking the starting rotation. In 1971, Ryan was traded to the Angels in the American League.

Ryan played his last four years with the Texas Rangers and pitched until he was 46. His previous season went out with a bang, however. In a game against the White Sox, Ryan hit Robin Ventura with a pitch. 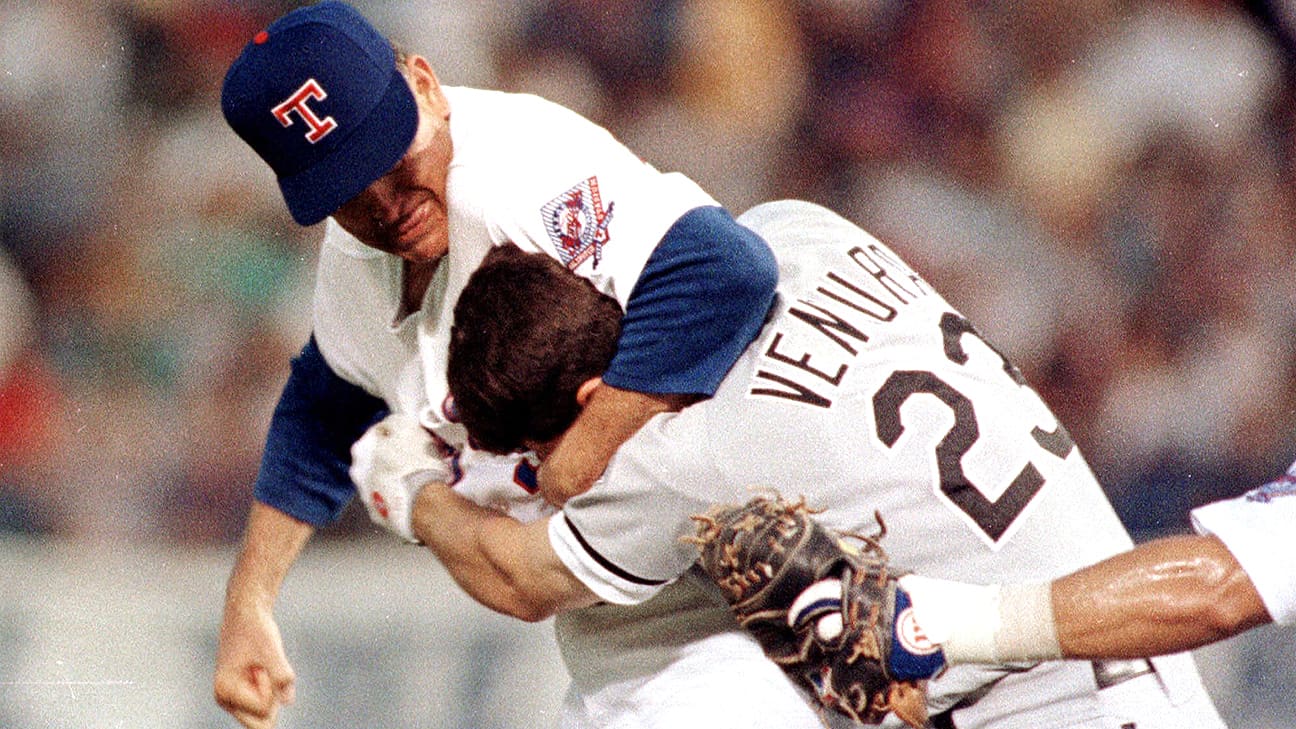 Ventura charged the mound, and when he approached Ryan put him in a headlock. Ryan said after the game that it was the same sort of move he used on steers he had to brand on his Texas ranch.

The Fight Heard Round The (Baseball) World

"If you don't think he did it on purpose, you don't know the game," Ventura said at the time. "I'm all right. He gave me a couple of noogies, but that was about it."

-Robin Ventura (on the fight with Nolan Ryan)

Ryan would ultimately enter the Baseball Hall of Fame, finishing his career as one of the greatest fast ball pitchers of his era.  Ryan to this day still holds the record for all time strikeouts (5714) and the most no-hitters (7).

Check out footage of Ryan showing off his 100+ MPH Fastball!