When it comes to the best two-sport athletes in the history of sports, only a few come to mind.

Deion Sanders, Danny Ainge, and even Brian Jordan. However, one player rises to the top of them all: Bo Jackson.

Bo Jackson’s rookie cards might seem like a no-brainer investment, but his cards were issued from 1986 to 1987, the peak of the Junk Era, and produced in the tens of millions.

In this piece, we review Bo Jackson’s top rookie cards and his most valuable ones, seeking to find the rookie cards that could be great investments. 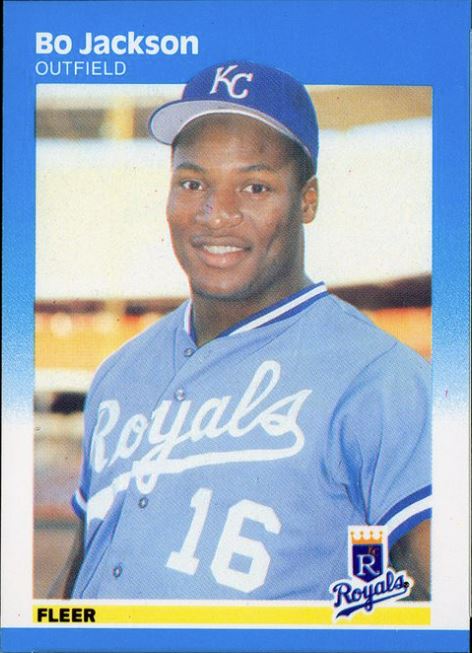 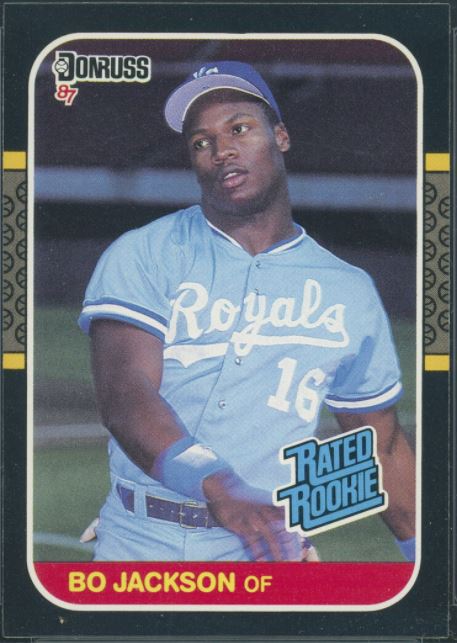 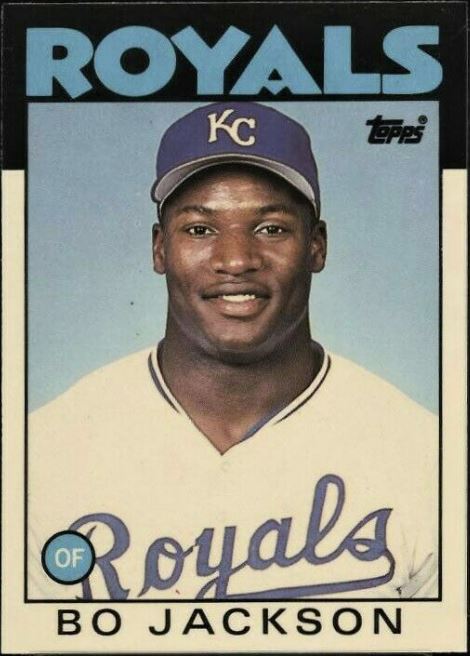 Here are our rankings for Bo Jackson's six best rookie cards, spanning both baseball and football.

Our choice for the best Bo Jackson rookie card is his 1986 Topps Traded Tiffany card. The card which was part of a very limited Tiffany Traded set from Topps is Bo's rarest and most valuable rookie card. Often times, a company will include a very popular player in update or traded sets in order to get a jump on excitement from collectors. This was certainly the case with Bo Jackson, as fans were soon starting to realize how much of a beast this guy would be on the diamond.

Note that the Tiffany cards are identical to the Topps Traded cards but have a glossy coating on the front of the cards.

A number I'm much more comfortable with, and why I view it as Bo's best rookie card from a long-term investment perspective.

PSA 9 (Mint) copies of Jackson's Traded Tiffany card sell for around $1000, which I think is a steal. And of course, if you have the big bucks, a PSA 10 can be bought at auction for over $10K. 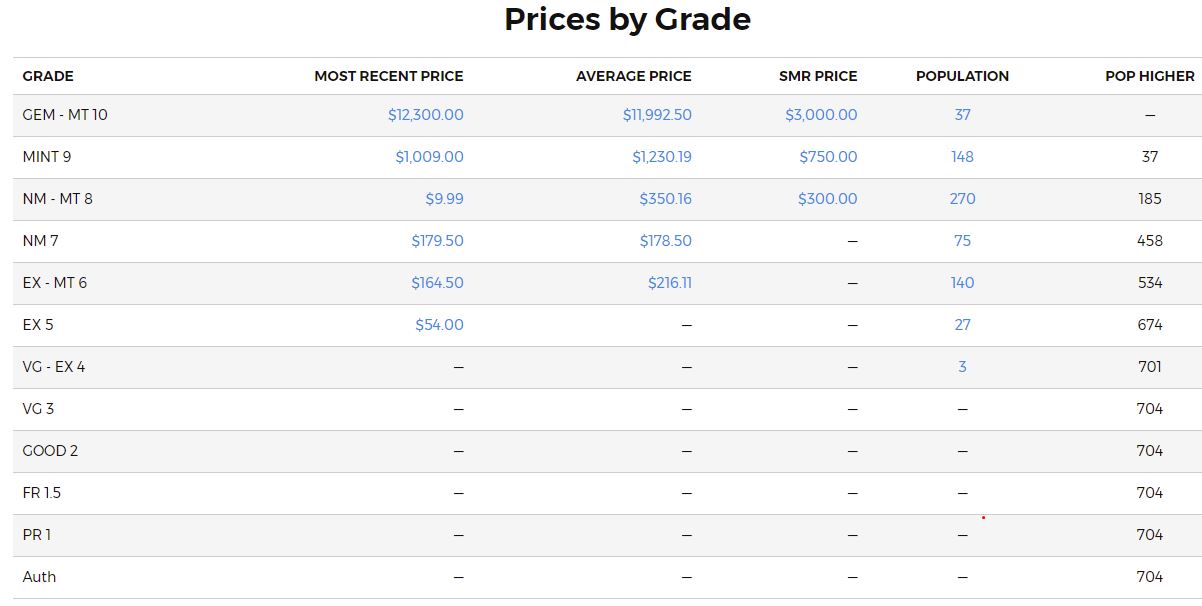 I grew up collecting during the '80s, and I always loved the 1987 Donruss set.

The funny thing is, at the time, the 87 Donruss set felt like a super premium issue, more expensive and harder to get than Topps. And while the scarcity difference is somewhat true ( estimates pin 87 Topps production at around 3x that of Donruss ), the fact is that the print runs for 87 Donruss were close to approximately 1 million copies of each player.

So, it's hard for me to say that Bo's 87 Donruss rookie card is a great investment (given the supply), however the cards are quite condition sensitive, due to the black borders.

Thus, I think you could buy a PSA 10 1987 Donruss Bo Jackson rookie NOW and see a pretty good long term return on your investment.

There are only ~1300 Gem Mint PSA 10 Bo Jackson Donruss rookies in existence and they can be found quite easily for less than $200. Sure there's still a massive, raw, ungraded population (and tons of wax out there).

But these cards are not easy to grade a Perfect 10. 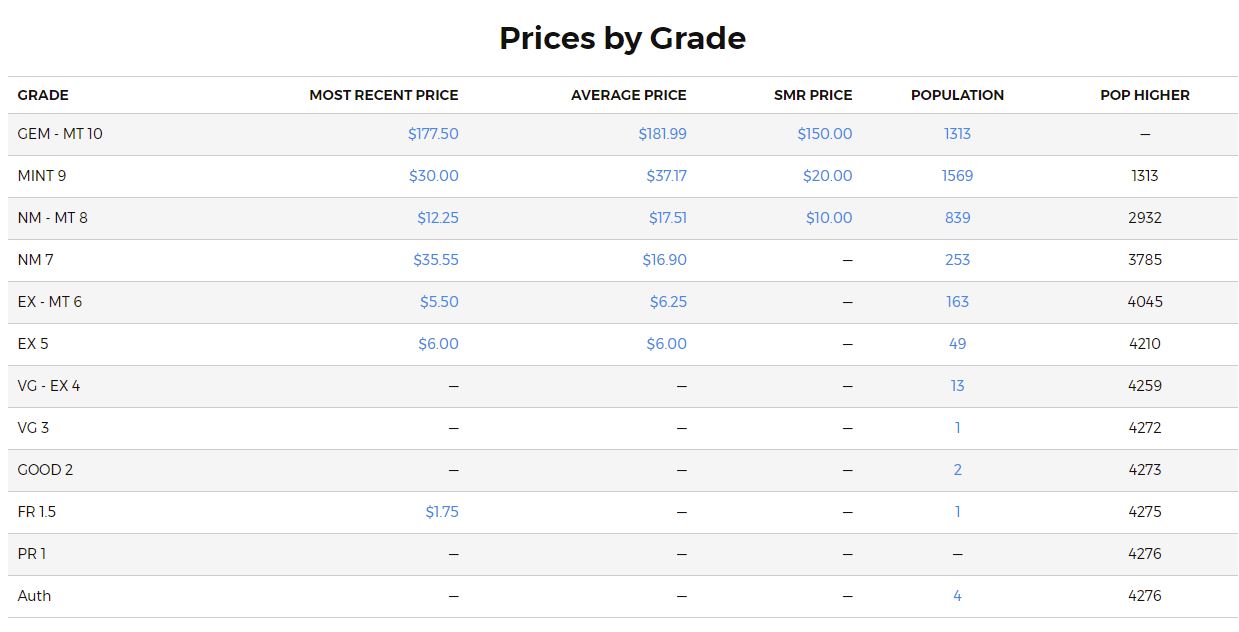 The Candian 1987 Donruss issue was issued in scarcer quantities and much harder to find versus the base Donruss set.

The only difference on the front of the cards is the big Leaf logo on the top left. 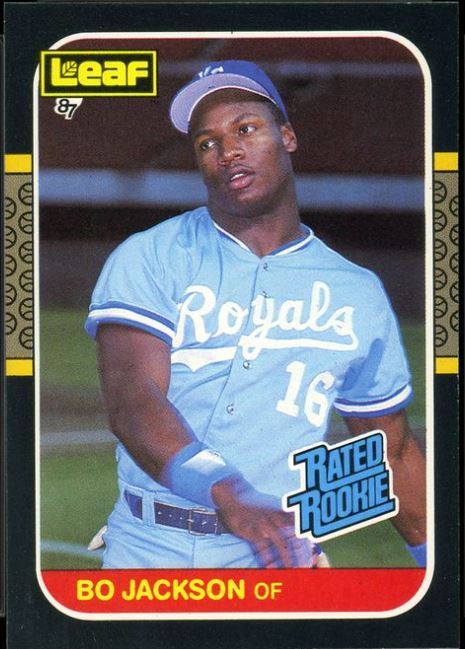 In examining the PSA Population reports, the Leaf Bo Jackson card has around 1/10th the graded population as the Donruss card.

If you can afford the step up in cost from the 1987 Donruss Bo PSA 10 to the 1987 Leaf Bo Jackson PSA 10, I'd recommend it, just based on the relative scarcity. 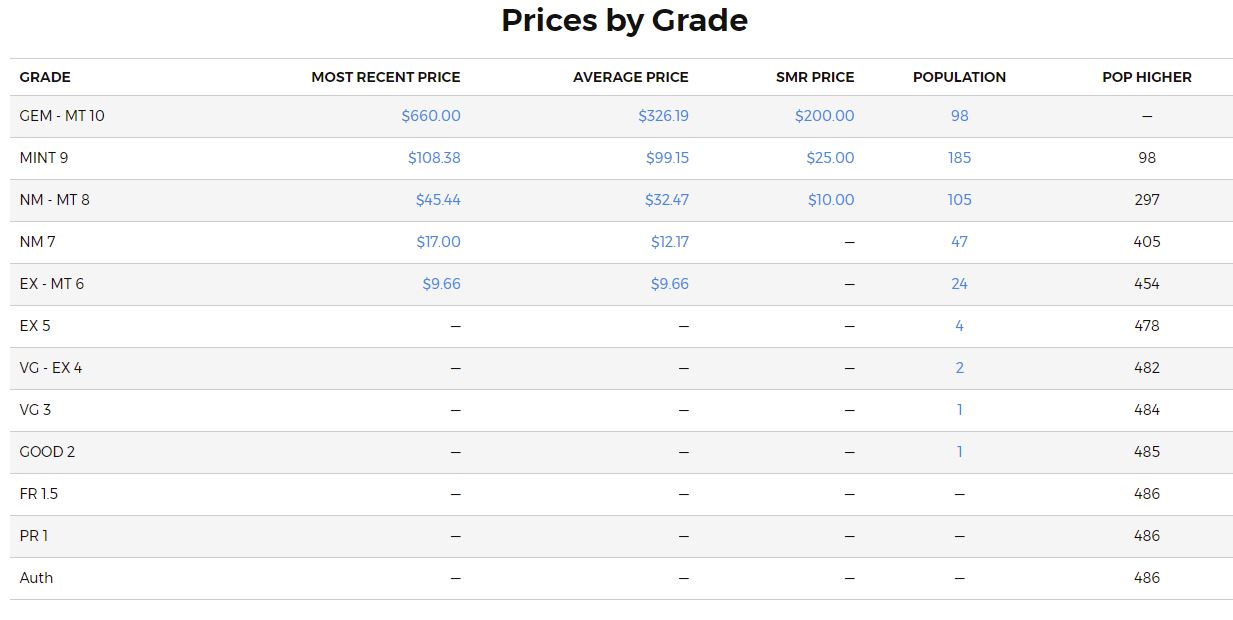 The 1987 Fleer Glossy issue was a new attempt for Fleer to create a premium variation of its regular baseball card issue.. The Fleer glossy set is identical to the base set, yet each card is covered with a layer of gloss. The sets were also issued in a blue metal collector's tin.

However, in one look at the population reports, it is clear that the 1987 Fleer Glossy Bo Jackson rookie card hasn't been graded all that much: only ~1100 copies in total have been graded.

I voted for the Bo Jackson Fleer Glossy rookie as the best value among all Bo Jackson rookie cards. 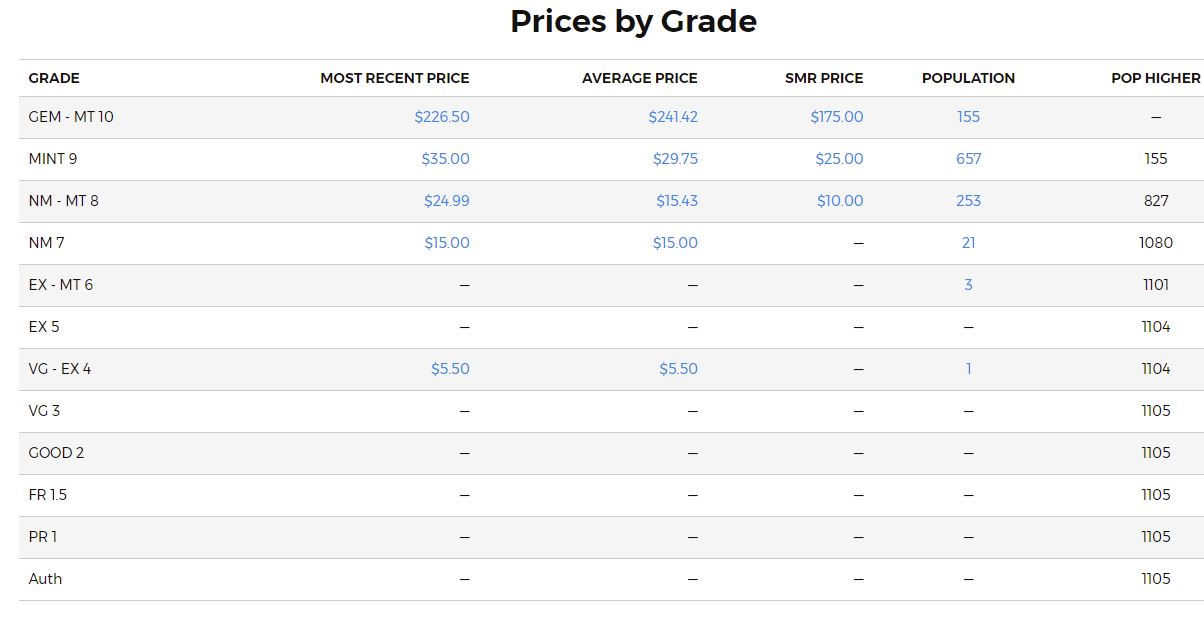 Another of Bo's true rookie cards, the Topps Tiffany set was a parallel issue to the base 1987 Topps set and similar to the Fleer Glossy set of the same year.

An estimated 30,000 Topps Tiffany sets were produced, meaning that the potential supply is still fairly high. 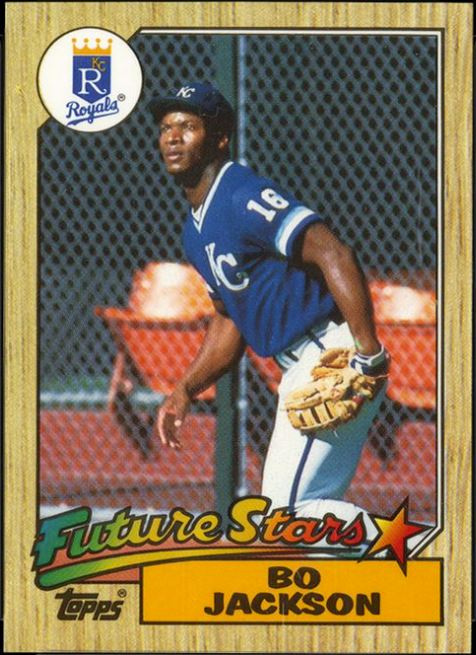 Nearly 1600 copies of the Bo Jackson Tiffany rookie card have been graded, with over 400 earning a PSA 10 grade. So, easier to find in comparison to the 1986 Topps Traded Tiffany Bo, but a higher population than the 87 Fleer Glossy set, even despite a shorter print run.

A PSA 10 copy sells for under $700, so pricier than the 1987 Fleer Glossy Bo Jackson rookie card. I still like it for investment purposes, but it will set you back more than the comparable Fleer Glossy Bo rookie.

Topps was sure to get Bo Jackson into its 1988 Topps Football set, producing Bo Jackson's only true football rookie card.

However, we can't deny the importance of the card, and I advise collectors to look at PSA 10, Gem-Mint copies as a potential investment. 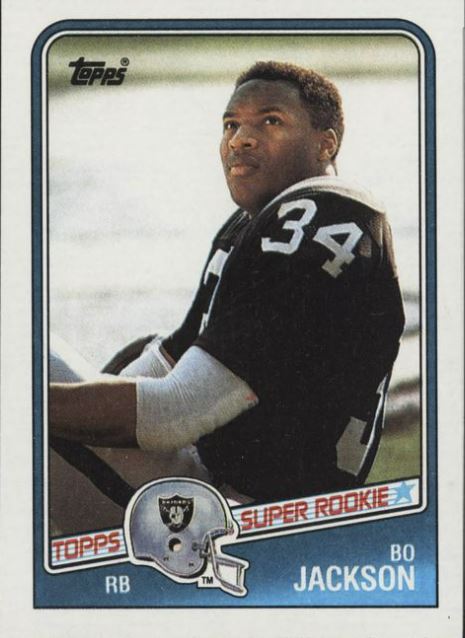 Check out our Most Valuable Football Cards Of All Time guide for other investment ideas.

See below for Bo's Most Popular Rookie cards and the corresponding values and cards graded in PSA 10 (Gem Mint) grade. Topps printed only 5,000 of the limited release 1986 Tiffany Traded sets, and Bo's XRC (extended rookie card) from the set has been graded only 700 times by PSA.

However, collectors can score lower grade copies for under $1000 in lower to mid grades or even ungraded.

The set was issued in limited quantities, with an estimated production run of 5000 sets.

The investment potential for Bo Jackson's rookie cards is good, especially in terms of the harder to find cards in PSA 10 grade.

Collectors with a more limited budget should focus on the 1987 Leaf, 1987 Fleer Glossy or 1987 Topps Tiffany Bo Jackson rooke cards in PSA 10 grade. Ultimately, I'm not sure if there's any specific catalyst to spur prices for Bo's cards higher in the near term.

Jackson's unique place in history as one of the best two-sport athletes of all time should keep demand strong for his more valuable and harder-to-find rookie cards.

Bo Jackson As A Player

Bo Jackson was the epitome of a two-sport athlete. Unfortunately, a hip injury derailed what might have been a long history for Bo as one of the best two-sport players in professional sports. 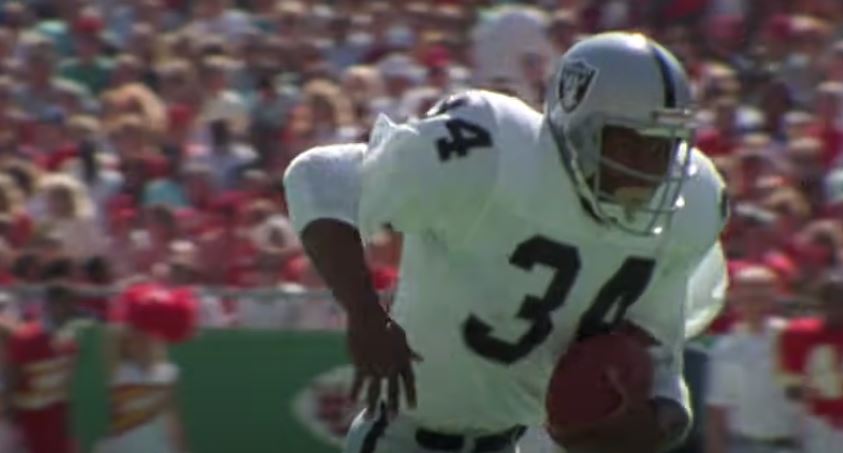 As a football player, Bo Jackson spent his college years as a running back for the Auburn Tigers, winning the Heisman Trophy in 1985 and finishing his four-year collegiate career with an impressive 4,575 total yards and 45 total touchdowns.

While playing collegiate football, Jackson started to show more interest in baseball and refused to report to the Tampa Bay Buccaneers, who drafted him #1 in the 1986 NFL Draft.

Listen to Bo Jackson tell a young boy about his career.

Jackson was comforted that the Raiders were willing to let Bo play both baseball and football and even miss some NFL games to do so.

Jackson was a fantastic athlete, and, unfortunately, he didn't get to have a longer career. His football career lasted only four seasons, and he was a part-time player, so when examining his stats, the numbers are hard to compare to anyone else. But when on the field, Jackson was an electric running back, and in my mind, one of the best I've ever seen.

In my opinion, Jackson was a better football player than a baseball player.

But Bo was still a damn good baseball player; he had power, speed, and a ridiculous arm in center field. He struck out a lot, so he wasn't much of a contact hitter. But his 1989 season was an example of what Bo could do - batting .256, with 32 home runs and 26 stolen bases, but 172 strikeouts in 515 at-bats.

Here's a taste of Bo's cannon arm in the outfield: