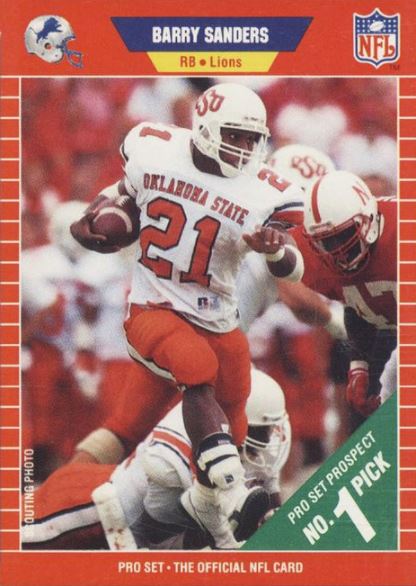 Here are our rankings for Barry Sanders best rookie cards, spanning both baseball and football.

The most well-recognized rookie card for Barry Sanders, the 1989 Score Football set was a landmark football issue.

The green design for the Rookie subset features simple yet effective player portraits.

Despite the set's appeal, it had a big print run, but reportedly well below those of the season's major competitor - Pro Set.

So, for graded cards, there are two times as many Score Barry Sanders rookie cards versus his Pro Set rookie card.

I do not yet, believe this reflects the actual card supplies.

I imagine more collectors are apt to submit the Score card for grading in hopes they might secure a PSA 10 Sanders rookie card, now worth over $1000. 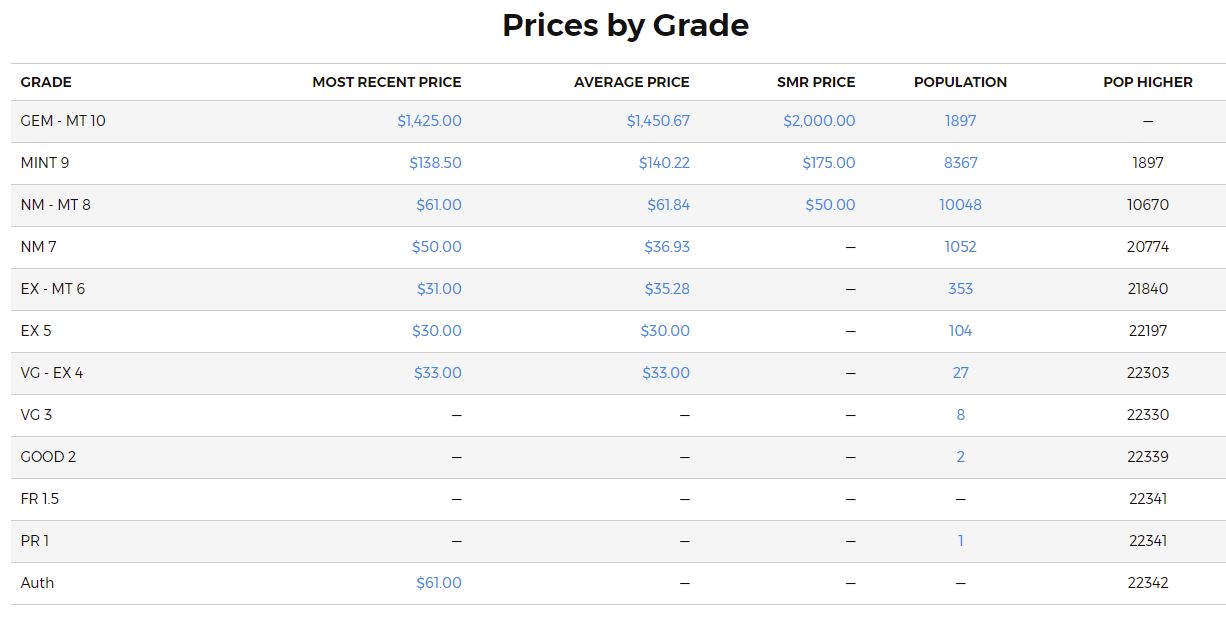 It is well known that the 1989 Pro Set Football cards were printed in massive quantities. While, unknown as to how many were produced, if you were collecting back in the late 80's, it was familiar territory to see these cards everywhere, and Pro Set had several printings of each series.

What was the production run of the 1989 Pro Set cards?

Hard to say, but I'd probably put it at over 2 million cards.

The 1989 Pro Set Barry Sanders rookie card features Barry doing what he did best at Oklahoma State. The Pro Set cards were never my favorites, but hard not to love this card of Sanders.

The population reports for his Pro Set rookie card show a massive graded population, although as previously mentioned, only half that of the Score Sanders rookie card.  Roughly 2300 Pro Set Sanders rookies have been graded Gem Mint (PSA 10) and recent sales on eBay have been for over $300. 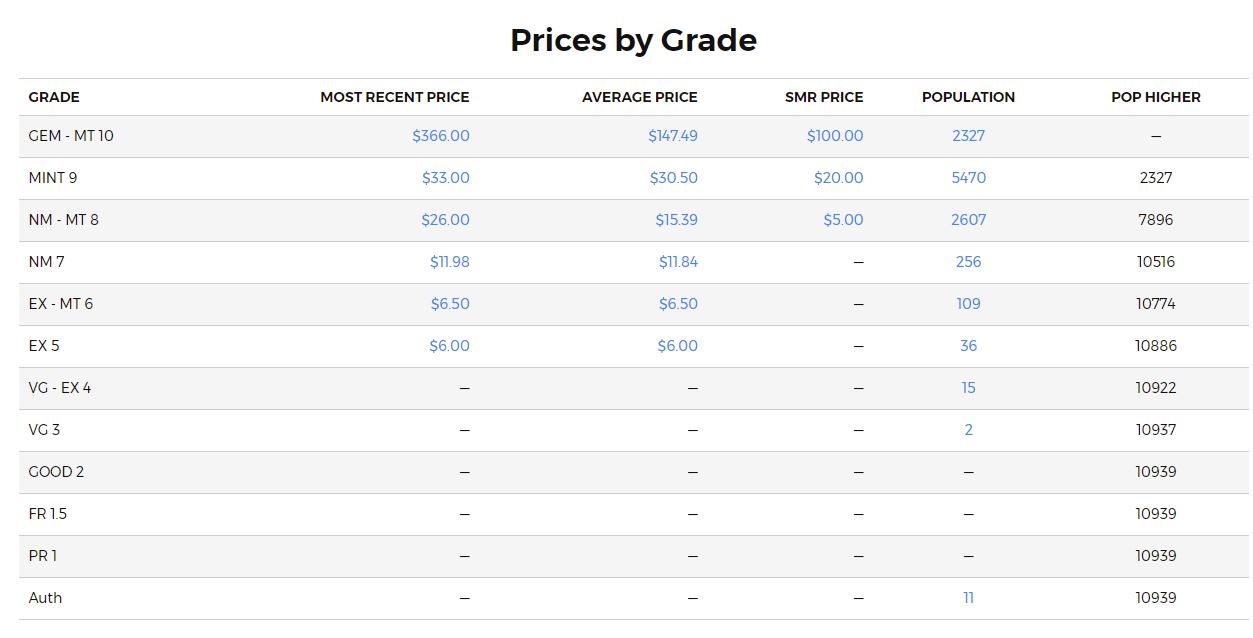 Barry Sanders was not a part of the base 1989 Topps Football card set, yet was included in the 1989 Topps Traded set. This was the first football traded issue from Topps. The set included several key HOF rookies, including Barry Sanders, Troy Aikman, Deion Sanders and Derrick Thomas. 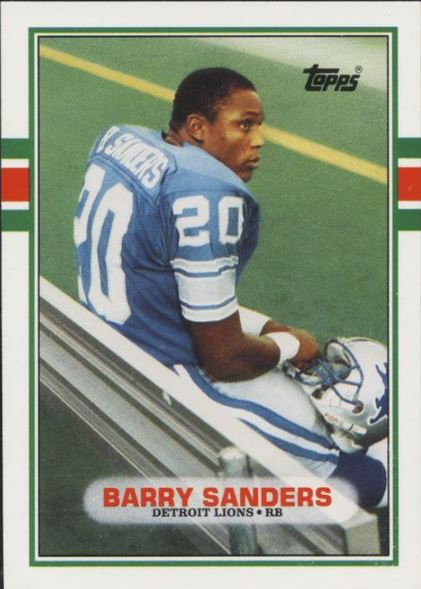 Production runs on the 89 Topps Traded set are unknown, but we know that the base, baseball sets from the same year were produced in the multiple millions.

A regional issue, so not technically considered a rookie card by hobby purists, however, given that the card was issued in 1989, the same year as his other rookie cards, we decided to include it. 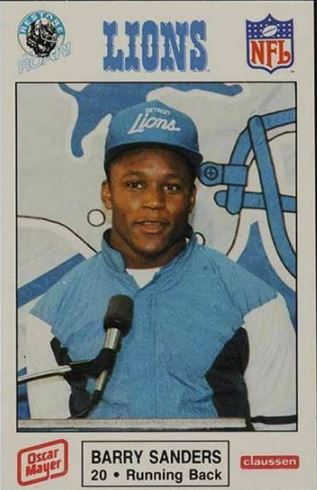 The card is commonly known as the 'Lions Police' card, however the card had several sponsors, most notably Oscar Mayer. Not as wide a distribution as any of Barry's other rookie cards, and the population reports show this.

Only around 1000 graded copies exist, with less than 300 graded a PSA 10. I find this one to be the best overall value for Sanders rookie card, given that a PSA 10 can be found for less than $300. 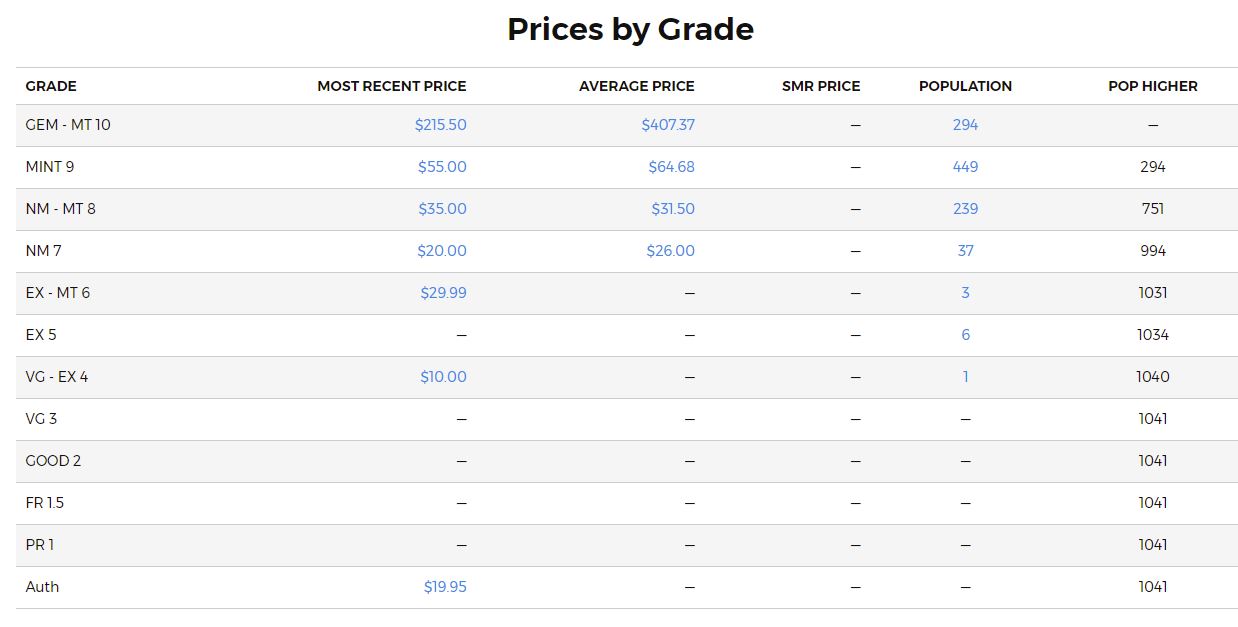 See below for Barry Sanders Rookie cards and the corresponding values for cards graded in PSA 10 (Gem Mint) grade.

Barry Sanders most valuable rookie card is the 1989 Score Football card. In PSA 10 (Gem Mint) condition, the card sells for over $1000.

The most affordable Barry Sanders rookie card is either the Topps Traded or Lions Police card, both of which average $200 in PSA 10 grade. The 1989 Lions Police card is the rarest Barry Sanders rookie card. The card had a very limited distribution and only 1000 PSA Graded copies exist.

Since it was a regional issue and not issued by a major card manufacturer, some view the Sanders Lions Police card as an extended rookie card. How Much Is An Autographed Barry Sanders Rookie?

It's more unique and helps differentiate against the mass produced rookies.

PSA has graded about 600 of the Sander 1989 Score Rookie Cards. A signed copy can be found for between $300 to $500, depending on the graded of the card and the signature grade. Given the massive population of the 1989 Barry Sanders rookie cards, it's hard to go out on a limb and say that any specific card is a fantastic investment.

Similar to what I advised with the Bo Jackson rookie cards, you need to focus primarily on the PSA 10 graded cards, since anything less has way too high of an existing supply to be a worthwhile investment.

Sanders 1989 Score remains his most popular and valuable card, but also the one with the highest graded population, despite being produced in lower quantities to most of the other 89 issues.

I would expect PSA 10 89 Score Sanders rookies to remain solid investments, however, the price point in comparison to the other cards seems a bit too extended.

The Pro Set rookie card is a good, cheaper alternative at only $200+ for a PSA 10, and the Detroit Police card is an attractive value as well, given the lower population and still affordable price point.

Barry Sanders was one of the best running backs in NFL history, and considered to be among the most elusive runners ever. His playmaking ability changed the game with his lateral quickness, balance, and vision. 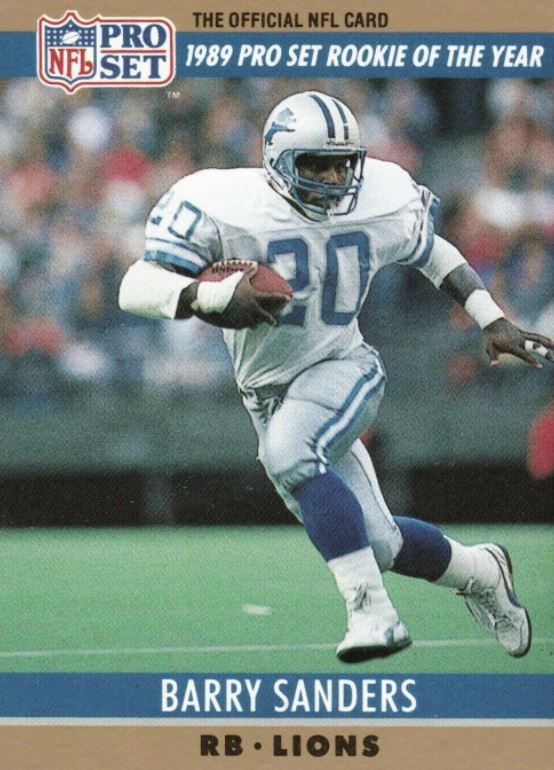 At only 5'8", he was overlooked by a lot of division one colleges, but landed at Oklahoma State University, serving as a backup to Thurman Thomas. Sanders became the starter in 1988 (his junior year) and erupted for 2,850 yards and 42 rushing touchdowns, securing the Heisman Trophy award.

Sanders was drafted by the Lions in the first round (#3 overall) of the 1999 NFL Draft. Still, given his height, many had question marks about his ability to survive the rigors of an NFL season. He quickly proved doubters wrong.

As far as running backs that I've witnessed in my life, the best I've seen were Bo Jackson and Barry Sanders.  His quickness was like no other and he had great hands as well which made him an amazing receiver for a running back.

Barry Sanders retired at the age of thirty and only 1,457 yards short of breaking the NFL all-time rushing record at the time. Sanders felt like it would be better to leave on top rather than risk injury later in his career after years of taking hits.

The Lions retired his number 20 and he was elected to the Pro Football Hall of Fame in 2004. Over the course of his career, Sanders was selected for the Pro Bowl in each of his ten seasons. He won the MVP award in 1997 and finished his career with 15,269 yards, the most yards for any running back over a ten year span.