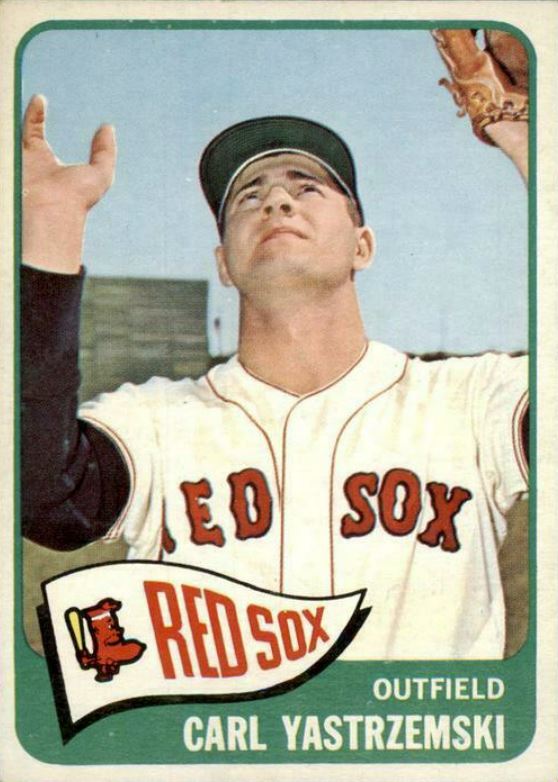 Its clean design with white borders and baseball pennant also make it one of the better-designed sets from Topps in the 1960s.

In this piece we take a closer look at the most valuable cards in the 1965 Topps Baseball card set, examining values, population reports, and overall investment potential.

Note this was the last release for Topps in which penny packs were sold. 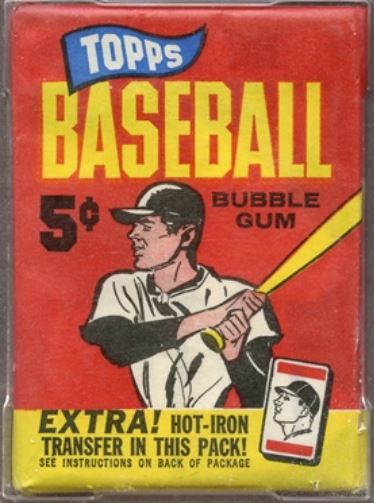 The set was issued in seven series, with the last series the hardest to find.

Packs included inserts, such as  hot iron transfers as shown below that were issued in five cent packs: 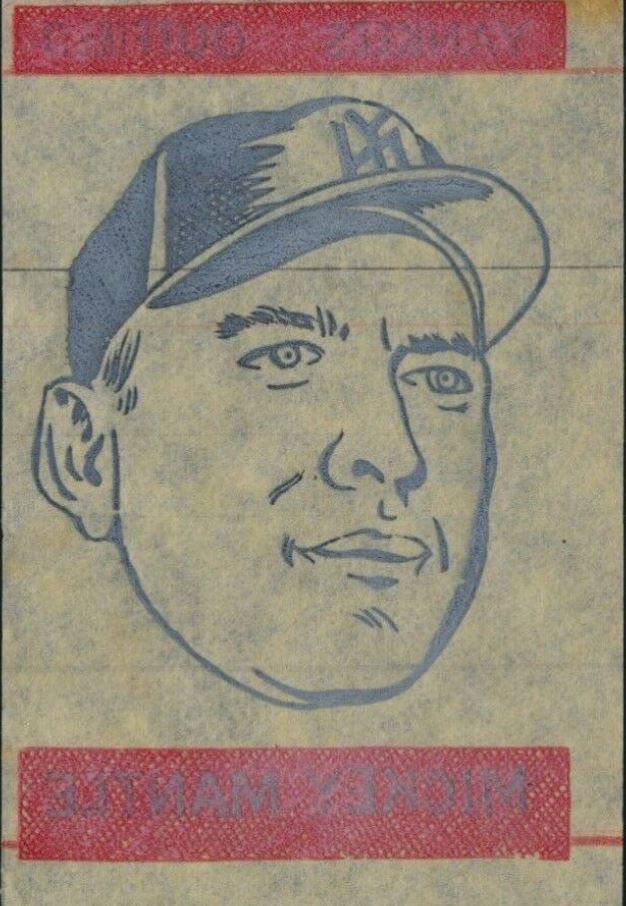 Some packs offered fans a gold foil insert card; sort of a sign of things to come in the modern pack era. The Mickey Mantle gold embossed card (shown below) is the most valuable card in the 72 card set. 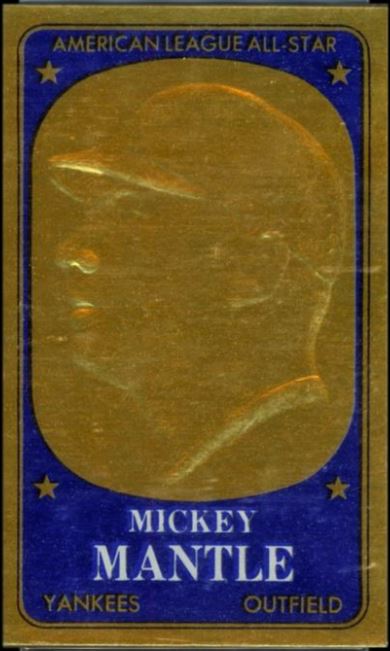 The 1965 Topps set has what is believed to be a lower production set from some of the other Topps sets of the era. PSA speculates that it could be due to the fact that the US at the time was entering the Vietnam war and production might have been slowed to account for the less than expected demand.

The LA Dodgers won the World Series in 1965, thanks to a record breaking season from HOF pitcher Sandy Koufax.

The Dodgers beat out the Minnesota Twins, who were led by Zoilo Versalles, who won the AL MVP that year.

All in all, there are forty-two cards of twenty HOF players in the 1965 Topps set.

As follows, I'll cover the Fourteen Most Valuable Baseball HOF cards from the 1965 Topps set. In addition, I'll discuss one non-HOF card, which looks like a good value. 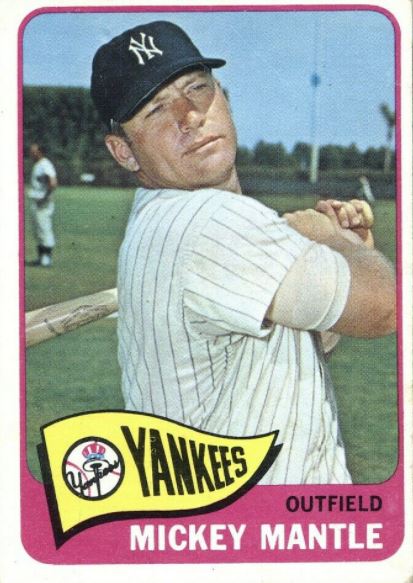 Here we get a classic shot of the Mick in what I think is probably one of his best overall designs on any Topps card.  Classic follow through, crisp, clean, white borders and a yellow Yankees pennant offset a darker pink background. It just works.

Mantle was coming off a season in 1964 where he finished second in MVP voting to Brooks Robinson. The 1965 season was a subpar year for Mantle, with his time limited by injuries. 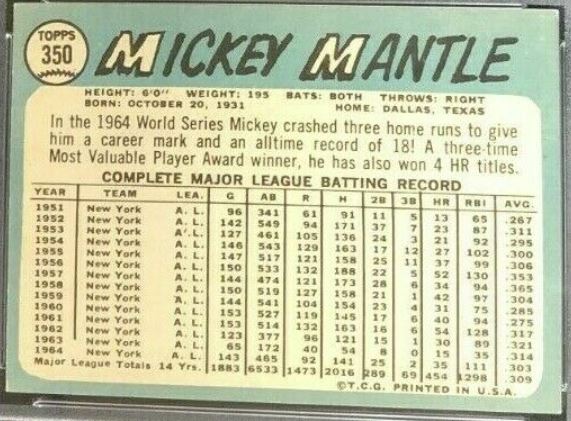 Of course, like most Topps sets from the 50s and 60s, the Mickey Mantle card in the set is the most valuable.  Prices range from under $300 in lower grades up to over $25K for a PSA 9 (Mint) copy.  Note that PSA has graded over 5000 copies of the 65 Topps Mantle, with none earning a perfect PSA 10. 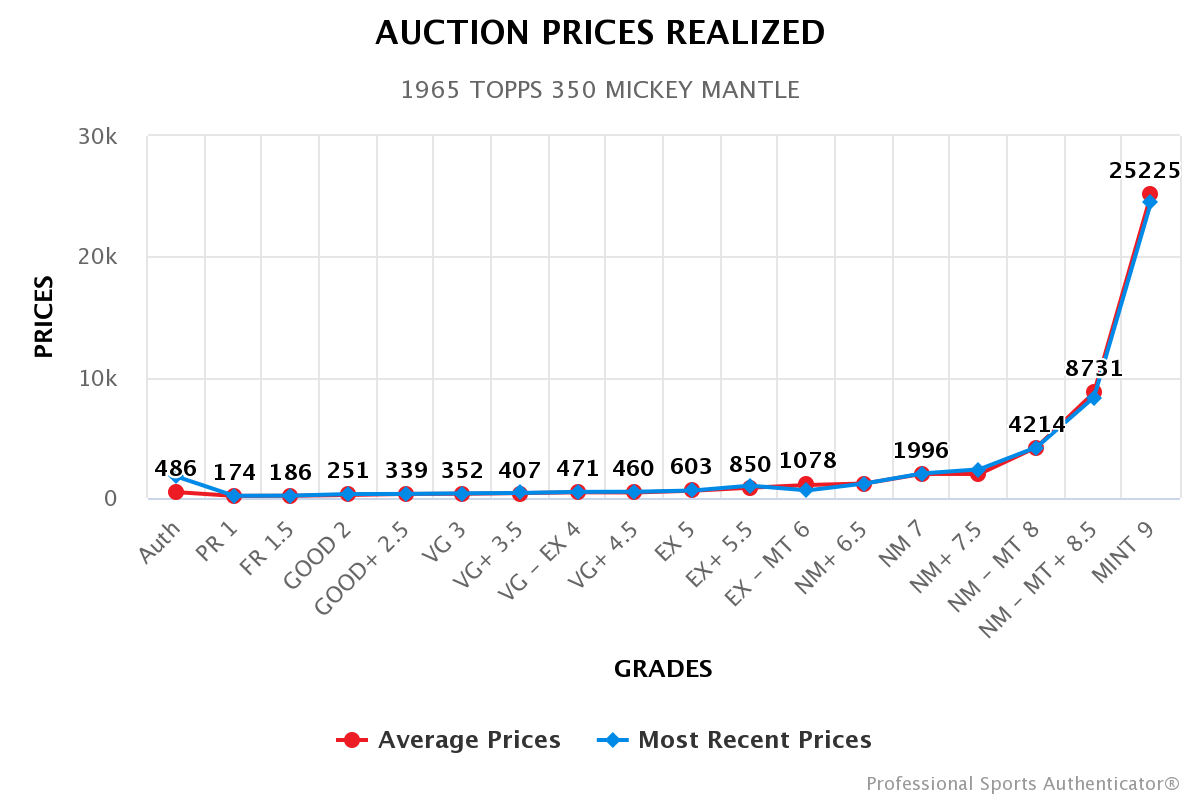 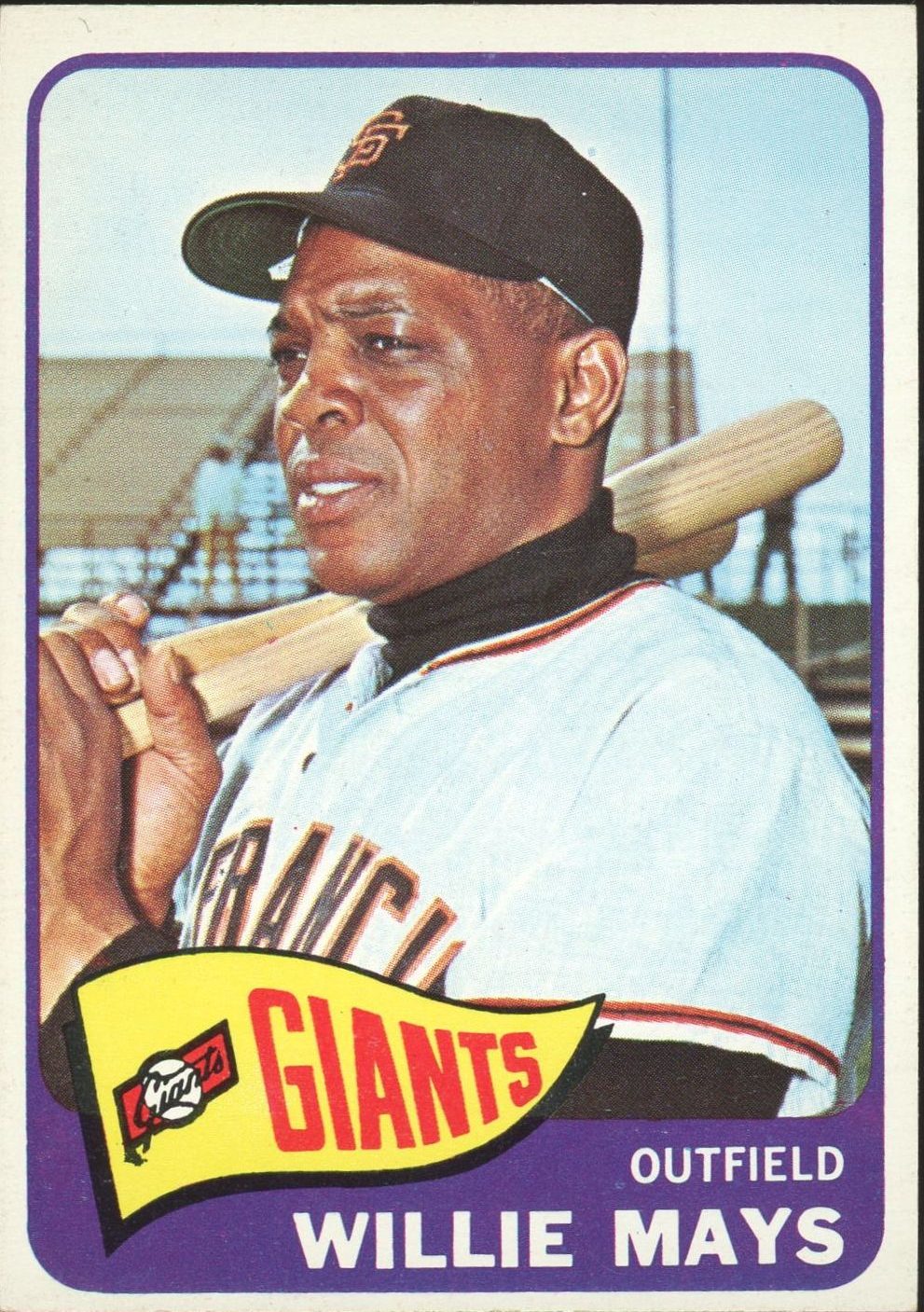 A classic card of the great Willie Mays.

The 'Say Hey Kid' is shown here with the Giants, on the verge of putting up one of the best statistical seasons of his career.

Mays also won a gold glove that year, one of twelve during his career!

PSA has graded over 3000 copies; low-grade or ungraded issues can be found for less than $100.  Graded PSA 9 - Mint copies sell for around $2000, and given that less than 100 PSA copies exist, it seems like an attractive value. 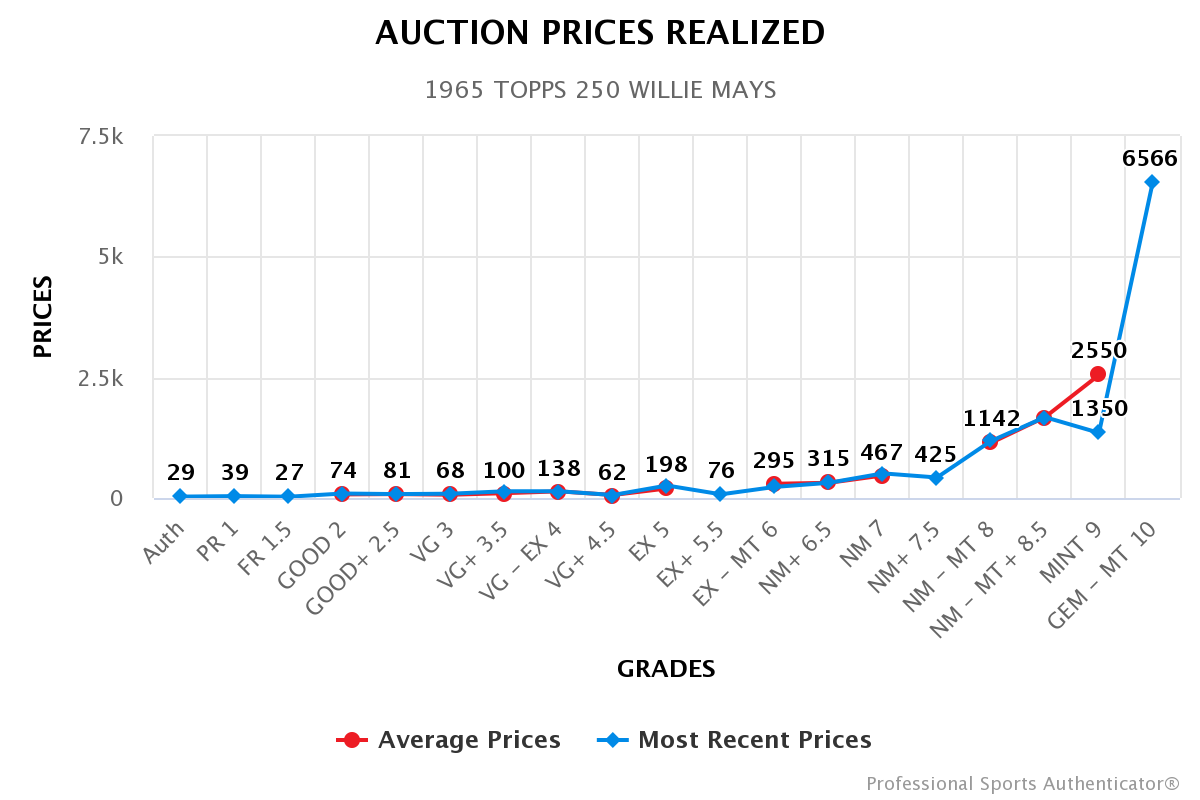 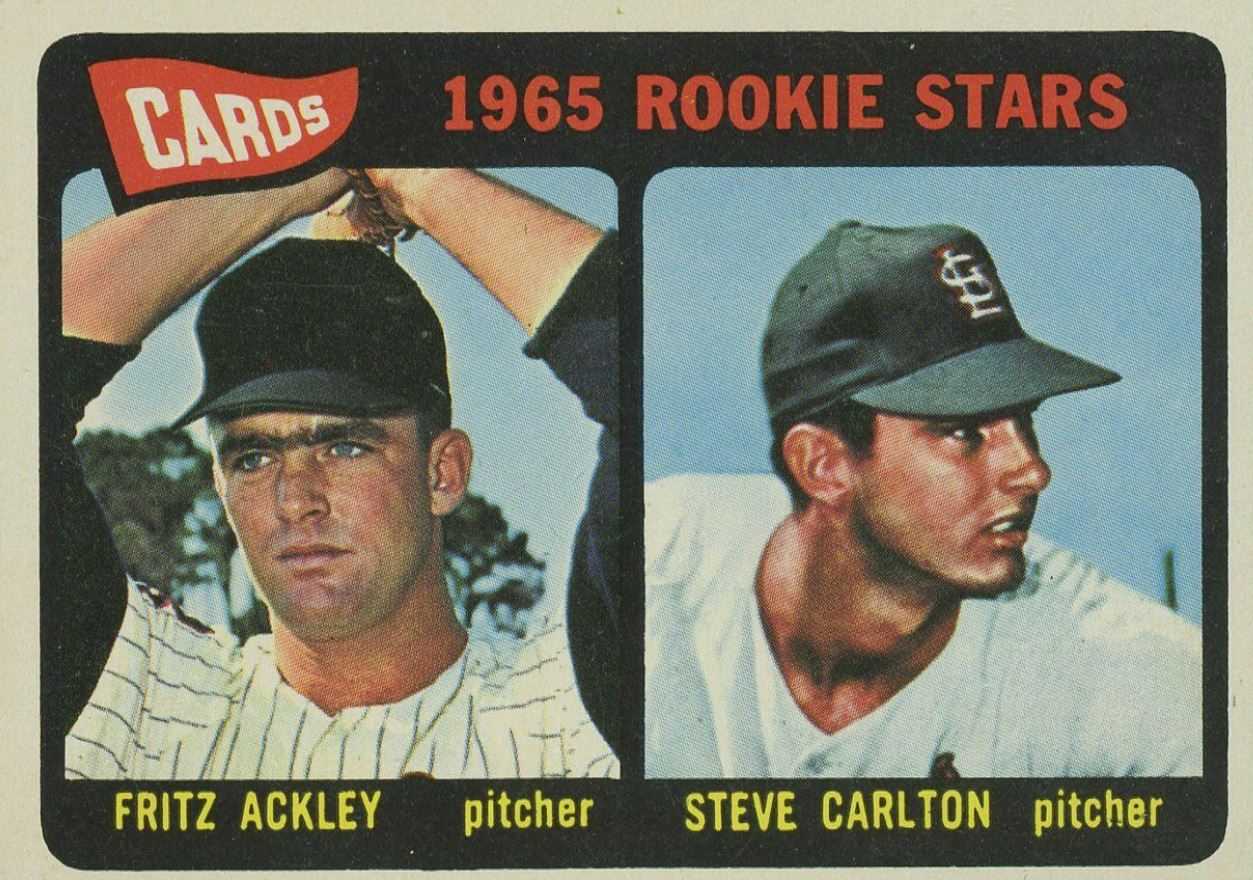 Carlton was one of the best pitchers of all time - Bill James puts him at #78 in the Top 100 Best Baseball Players in History.

Carlton's rookie card shows him as a young buck with the St Louis Cardinals, where he would spend seven years of his career before heading off to the Phillies, where he came into his own.

His partner on the card - Fritz Ackley, didn't amount to much of a player, as he pitched only 19 innings in the major leagues.

The Carlton rookie card is the second most valuable card in the 1965 Topps set, although in very plentiful supply; PSA has graded over 6000 copies.

If you want a cheap ungraded copy, head over to eBay - usually, lower-grade options are out there for less than a few hundred dollars. 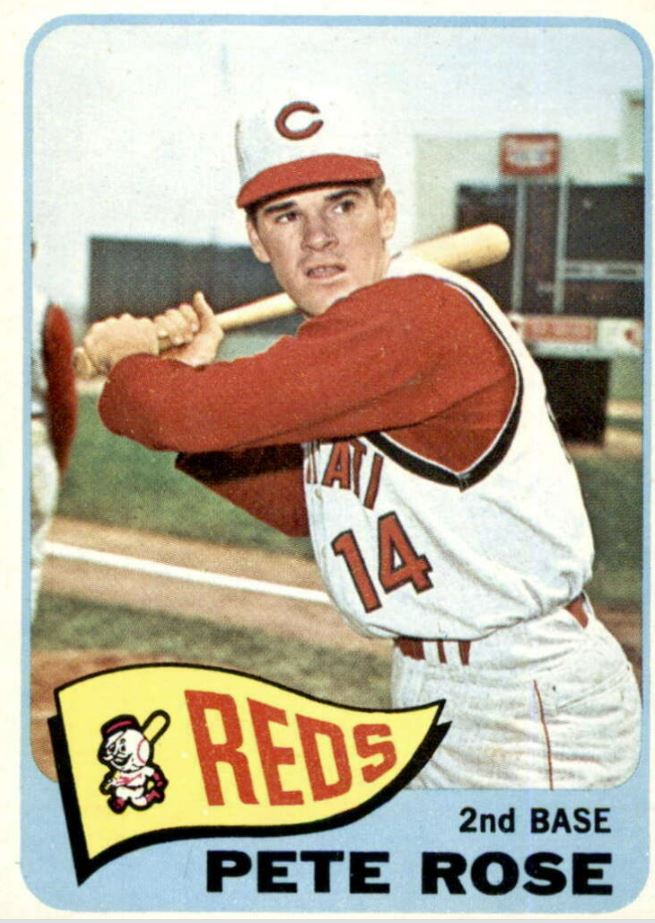 The third-year card for the great Pete Rose.

I chose this one as the best overall design among all the HOF player cards; I love the pose and concentration of 'Charlie Hustle'.  Plus, the contrast of the yellow and light blue colors makes for an excellent card for collectors.

Rose had a remarkable year in 1965, finishing sixth in MVP voting in only his third season. He batted .312 with a league-leading 209 hits.

Collectors highly desire Rose’s 1965 Topps card, and like others in the set, however, it's got a plentiful supply; PSA has graded nearly 4000 copies.

The good part is that if you want an ungraded or lower grade copy, you can usually find one for under a few hundred bucks. 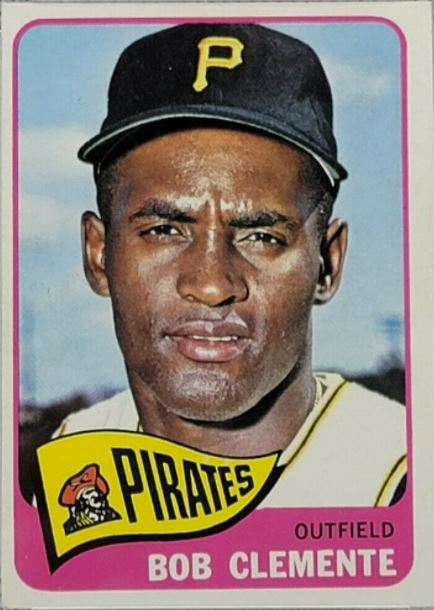 Roberto (or 'Bob') Clemente was in the prime of his career here, and this photo just exudes the confidence of this Pirates slugger.

In 1965, Clemente was still in the prime of his career, finishing the year with a .329 batting average and finishing eighth in MVP voting while also winning a Gold Glove that year.

Clemente's cards remain hot, and this one is no exception. While a high-grade PSA 8 or higher copy will run over $1K, lower grade or ungraded copies can often be found for less than $100. 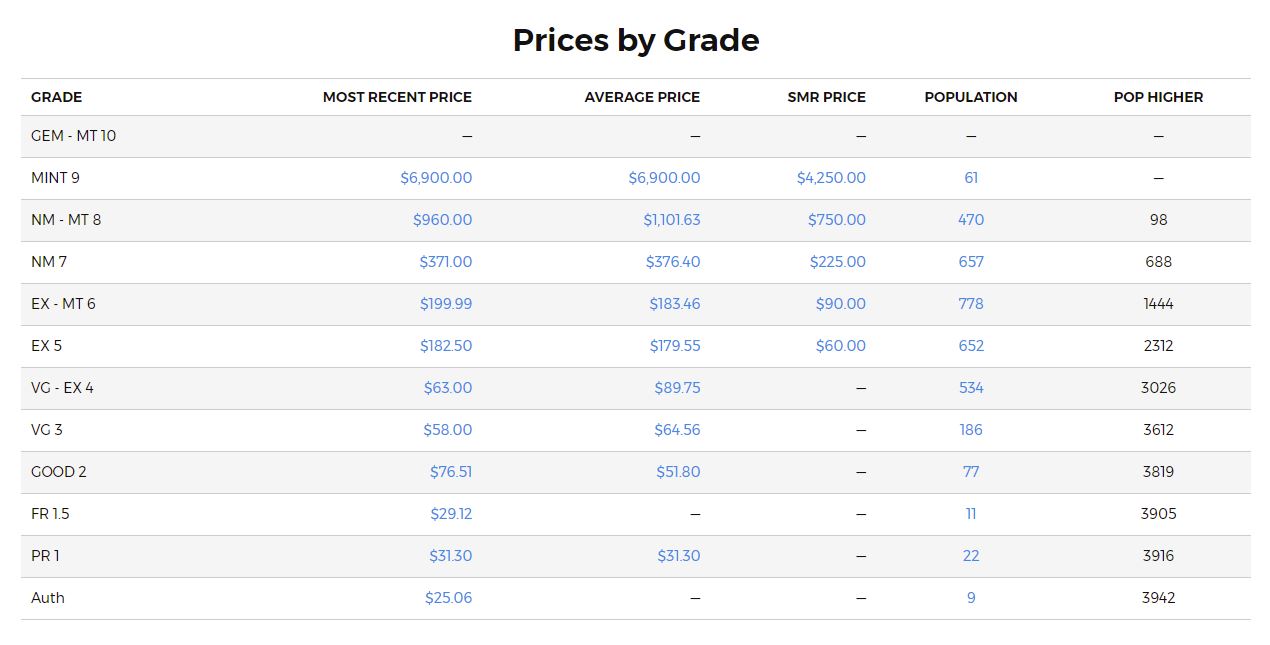 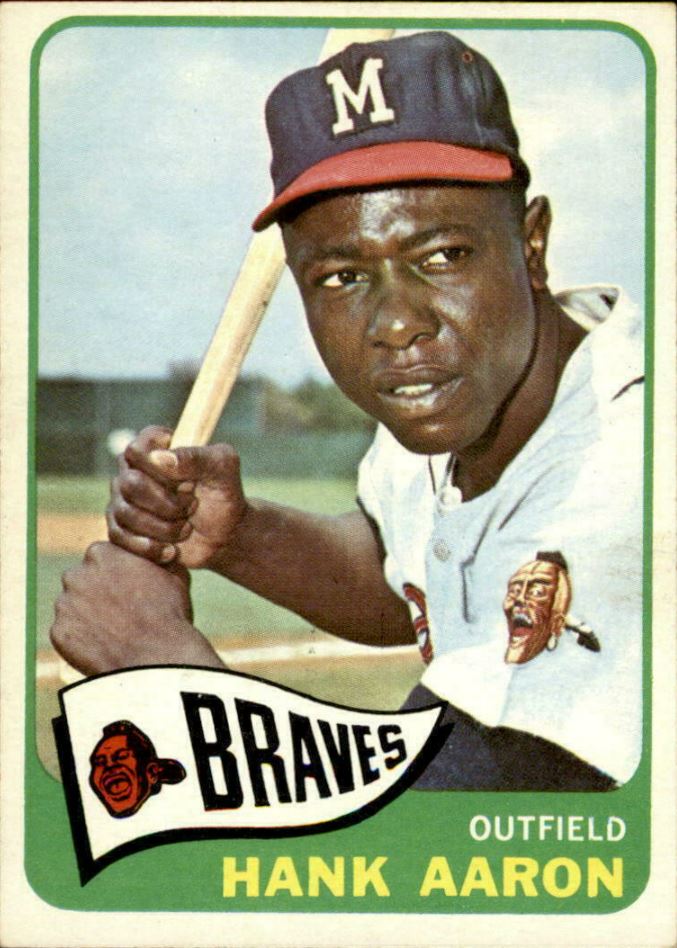 "Hammering" Hank played an unbelievable 23 years in the big leagues and here he is, still in the midst of his career, getting ready to crush another inside fastball into the stands.

1965 was kind of a middling power year for Aaron, at least from a homerun perspective; he hit 32 homeruns, with only 89 RBIs, however it was still good enough for seventh place in MVP voting.

High grade copies of the 65 Topps Aaron can approach several thousands of dollars, but if you want an ungraded copy, eBay often has them on sale for under a few hundred bucks. 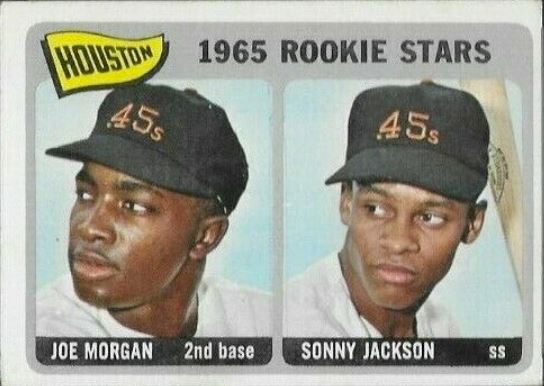 The Joe Morgan rookie card is, along with Steve Carlton, one of the more valuable rookie cards in the set.

Morgan was a great second baseman, terrific at the plate with good power and excellent range in the field - he won five gold gloves throughout his career.

I must say, I also love that 45s hat. Note that most people don't realize this, but before they were the Astros, they were the Houston Colt 45s.

The Joe Morgan rookie card is a good investment in higher grades. 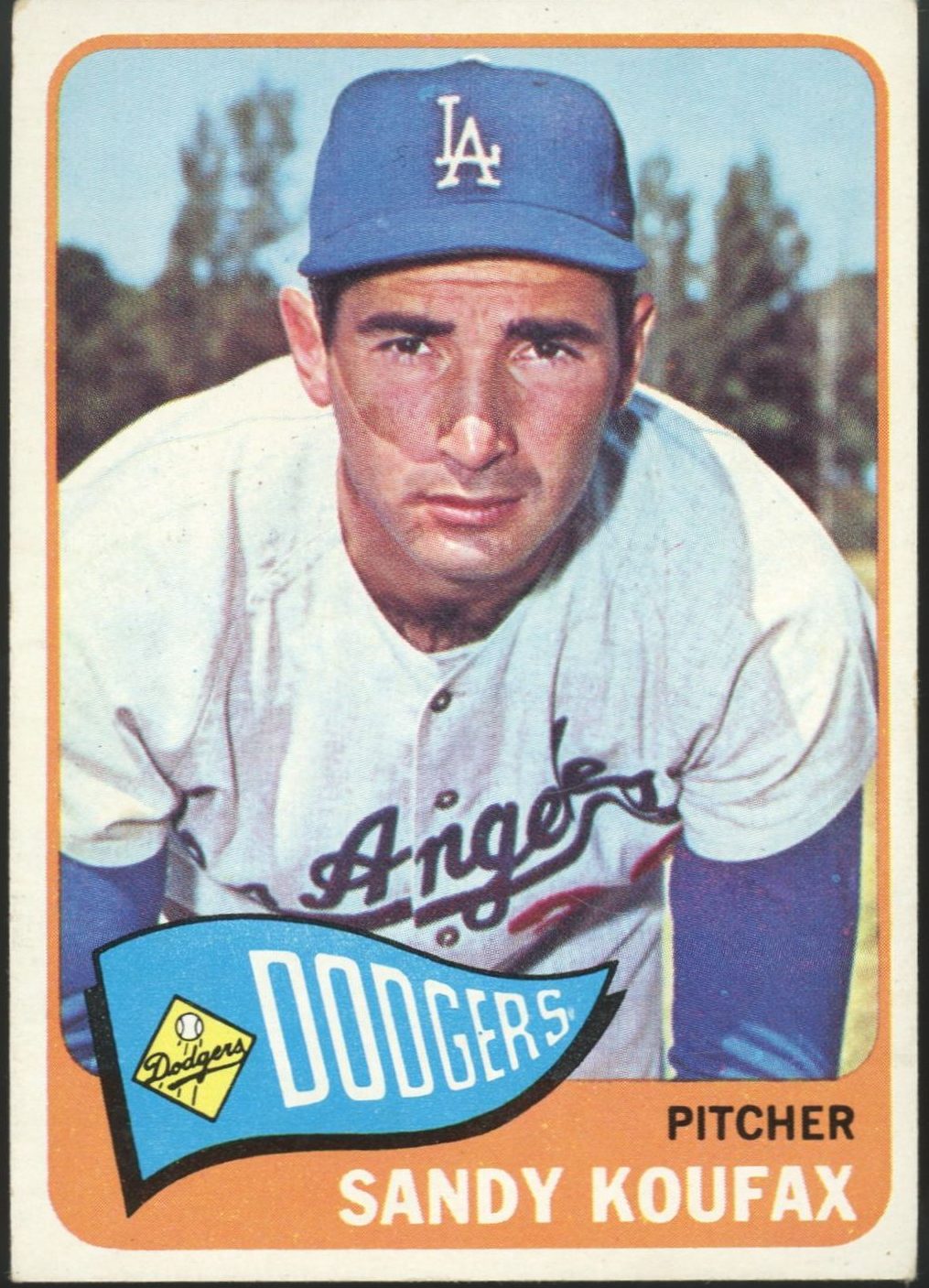 One of the all-time great southpaw pitchers, Koufax, here is in serious mode, probably getting ready to think about how many batters he will strikeout in 1965.

A whopping 382 strikeouts for Sandy in 1965, the highest modern-day total at the time. Good for a Cy Young award that year. 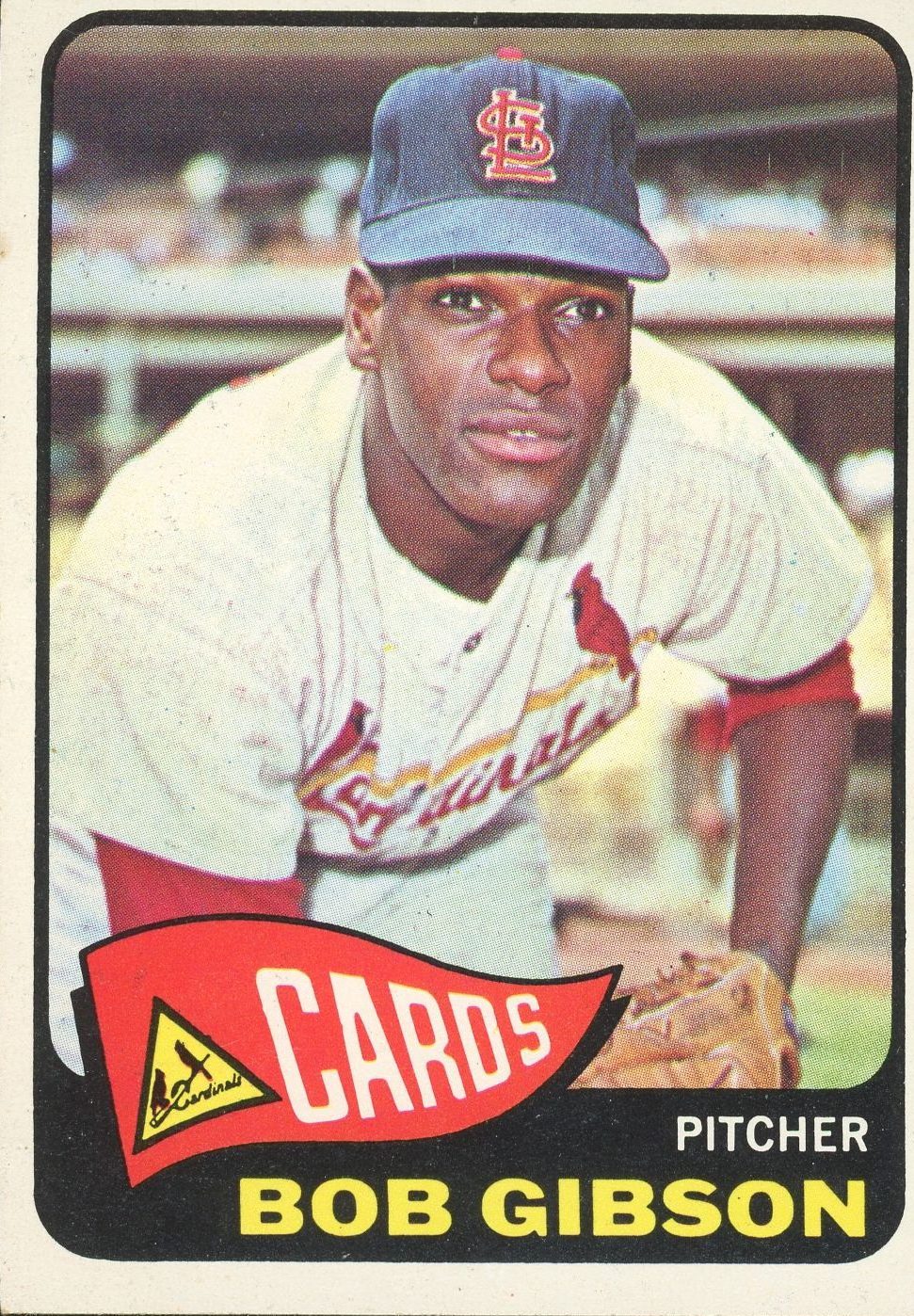 Gibson had a great year in 1965, winning 20 games with 270 strikeouts. Not entirely on the level of Koufax, but still a damn good season.

PSA has graded less than 1500 copies of the Gibson card, which pales in compared to some of the other big names in the set.

"Okay Carl, pretend that your catching a fly ball, and I'll take the shot"

That's the vibe I get here and it's odd since most other photos are portraits or the player looking into the lens.

This marks the sixth official card for the great 'Yaz'.

It's not a super expensive card, so if you can sometimes target higher grade copies for less than $500. 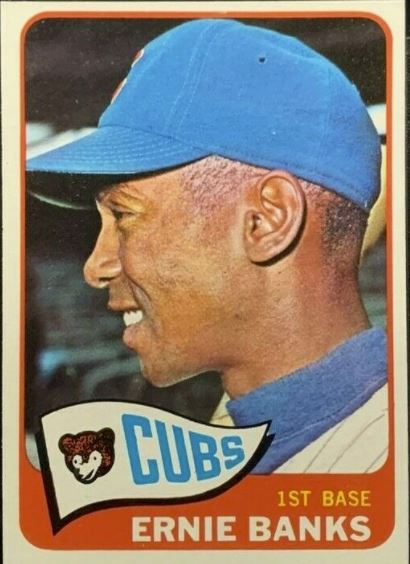 In 1965, at 34, Banks was starting to hit the decline that usually happens in the late 30's for ballplayers.

Here he is, as usual, all smiles, however.

The card is one of the more affordable big name HOF cards from the se. 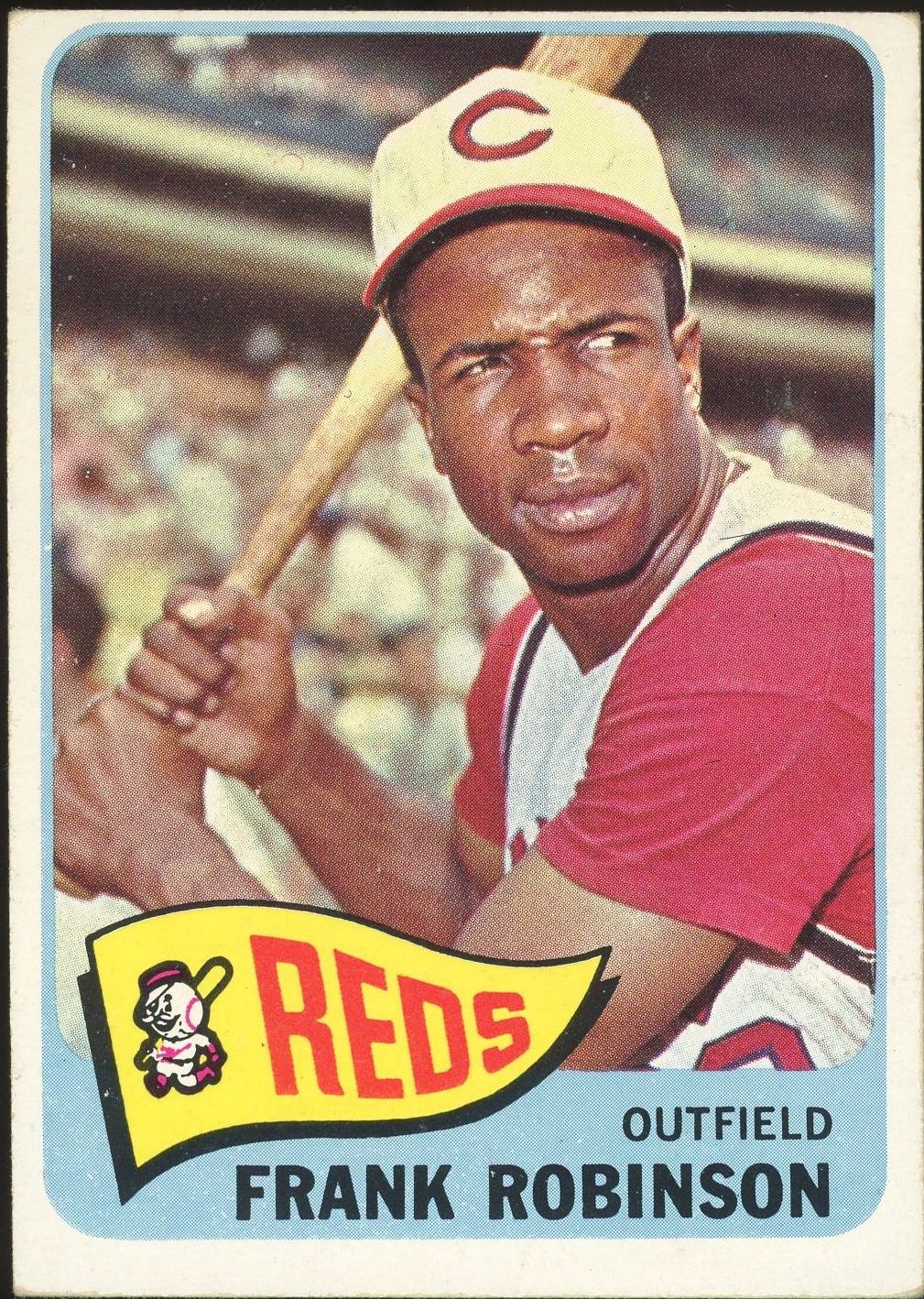 I think Robinson might be one of the more underrated baseball players of all time.

I love the 65 Topps card of him, as we get a full batting pose, and like the Rose card, we get a good contrast of colors with the reds, yellows and blues.

In 1965, Robinson had a good year but was setting the tables for the next season in which he would win the MVP award. 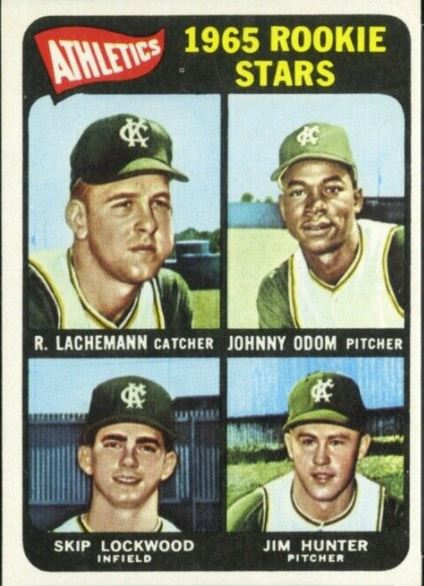 Jim "Catfish" Hunter wasn't on Bob Gibson or Sandy Koufax's level, but he was a fine pitcher and a Hall of Famer.

Several other players here also had pretty good careers - notably 'Blue Moon' Odom who finished with 84 wins and Skip Lockwood who played twelve seasons in baseball.  Lachemann was a bit of a bust, playing in only 118 games.

Hunter's rookie is fairly affordable and cheaper than the higher priced Carlton and Morgan rookie cards.

Graded copies in mid grade can be found for under a few hundred bucks. 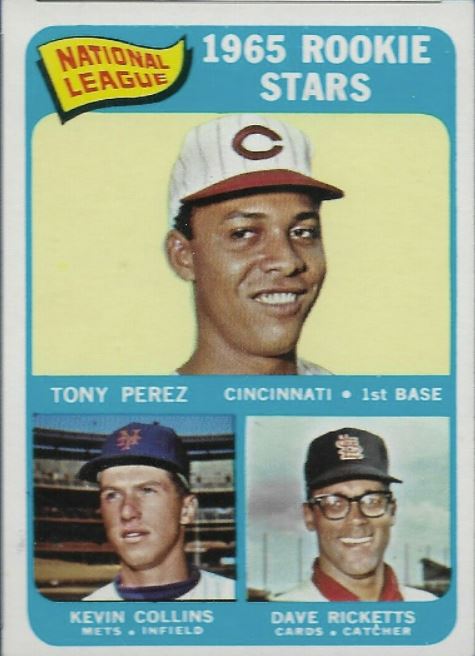 One of the other big name rookie cards in the set, Tony Perez is a Hall of Famer, but did he deserve a HOF nod? 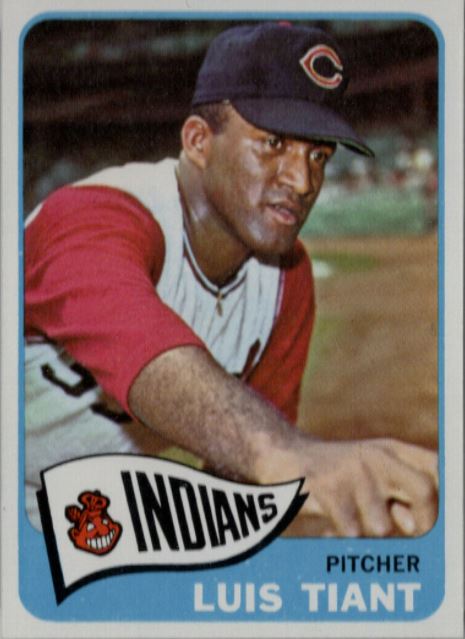 OK, the Luis Tiant rookie card is my choice for the most undervalued card in the set.

Maybe because I'm a Red Sox homer, but in reality its for the fact that Tiant had a damn good career!

Here's a great piece arguing for his admission to the HOF.

I was able to find many in attractive grades for under $50.

Investment Potential Of The 1965 Topps Set

I think the 1965 Topps set has good, but not great investment potential.

I like the 65 Topps set, it has a great design and the set has some attractive rookie cards. However, the supply, like many post war late 1960s/1970s Topps sets is fairly abundant.

This means that any lower grade key cards from the set aren't likely to be a booming investment. However, if you can afford higher grade copies of the big stars or rookie cards, they might be able to hold their own.

My only concern is that outside of Steve Carlton, the demand for guys like Catfish Hunter, Tony Perez et al. is waning as collectors from the era get older.

Give the higher grade copies consideration and I think any better condition sets of 1965 Topps should be a good investment over time.

Overall Investment Rating: 6.5 out of 10