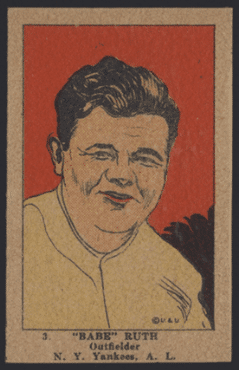 To some, these are the ugliest cards ever created, yet I believe the 1923 W515 strip card set is one the most underrated baseball card sets of all time.

It’s got star power; two Babe Ruth cards, a Ty Cobb and cards of 22 other Baseball Hall of Fame players.

There are celebrity look-a likes, brother cards, print variations and some of the more interesting cartoon color combinations you’ve ever seen.

And with all of that, the cards can be found for a fraction the price of some of the other more popular tobacco or caramel cards of the era.

Quick Navigation
A Background On W515 Strips
Details Of The Set
How To Tell The Difference Between a W515-1 and W515-2
Ugliest Set Ever or Thing of Beauty?
Availability of W515 Cards
Current Values and Future Potential

A Background On W515 Strips

The W515 set is a strip card set and was issued in five card strips that were cut by store owners and handed out to customers.  There are two variations to the set, the W515-1 and W515-2 set, with the latter known as “The Little Wonder Picture Series”.  The W515-2 set is slightly larger in size with variations, including the text “The Little Wonder Picture Series” printed on the tops of the strips.

We can get some indications of where these were distributed based on a very rare variation to the set.  The widely available cards have blank backs yet there is a ‘Jersey Ice Cream Variation’ which has a Jersey Ice Cream Variation on the back.  Hat Tip to Pre War Cards for alerting me to this fact.   I’ve personally never seen one of these come up for sale, but as Pre War Cards notes, there was an Eddie Collins that sold at auction back in 2015 for $478 at auction.  If you see any, jump all over them!

Details Of The Set

The set consists of 60 players with a star studded checklist (including two Babe Ruths) with the checklist the same across the two variations.  The issuer is unknown yet we know that the images were sourced from the Underwood and Underwood picture company which was the largest issuer of news photographs at the time.

There are two Babe Ruth Cards, a Ty Cobb, and 22 Hall of Famers in the W515 set.  Thus, if you’re looking for pure star power, it doesn’t get much better.

I have no idea where “The Little Wonder Picture Series’ comes from and since we don’t know who the issuer was, it’s hard to piece together the puzzle.  If you have any intel on this, please drop me a line at chris@allvintagecards.com

The W515 cards were issued in 5 card strips and store owners would cut the cards to hand out to customers.  The only difference between the two sets is that with the second variation,  ‘The Little Wonder Picture Series’ was printed on top of the five card strip.  Thus, the 1st and 5th cards of the strip don’t have any printing above the card.

This can make it challenging to identify W515-2 cards that were on the outer position of the strip.   Also since strips were hand cut, often time the top border is missing, making it tougher to distinguish the two cards.

Here’s one example.  As shown, it would be easy to identify a Schang, Heilman or Ward, but what about the Grimes or the Mays, which have no text on the top border?

While that is one way to distinguish some of the cards (assuming they have the top borders) there is one easier way to do so.

Most of the W515 have a copyright mark yet with the two variations, the symbol is located in different spots on the card.

Below is a W515-1 Ty Cobb Card.  I’ve circled in red where there is a copyright symbol, “U & U” which is the Underwood and Underwood copyright. 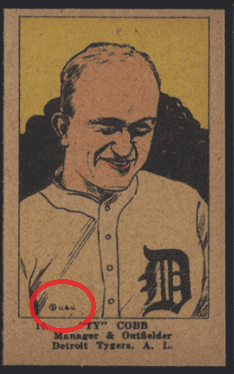 Yet, if we look at a W515-2 Cobb card as shown below, there is no copyright symbol.  Yep that's where this all gets really confusing. 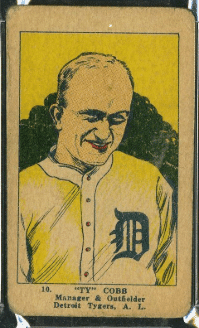 Based on my research I've discovered a few things (and this helps if you also view the full set I've posted in the next section.

For the W515-2 set, for cards 1-40, the copyright symbol was left off of the end cards that don't have any of the 'The Little Wonder Picture Series' printed on the top.  For those cards with the print on top, the copyright is included near the top border of the card.  See the Jack Bentley W515-2 card for an example below (note this one also has two copyright marks, as do some others): 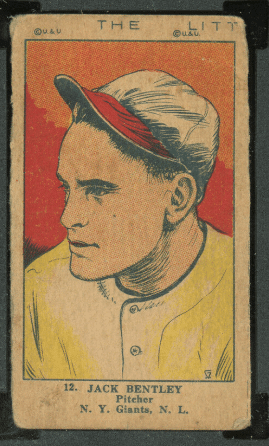 One last thing I will mention, and if you can't quite figure out if a card is a W515-1 or a W515-2 is that some of the sizing of the images is slightly different.  Credit to the Net54 diehards for pointing this out.

Here's a good example of this with Wilbert Robinson.  Here's his W515-1

And then his W515-2.  Check out the height from Robinson's hat to the top border of the card. 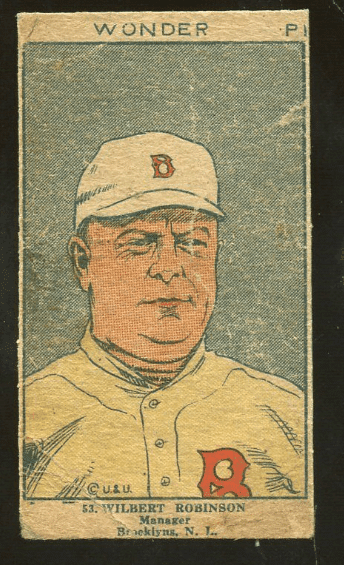 Ugliest Set Ever or Thing of Beauty?

It was a post over at the Net54 forums that got me first interested in the W515 sets.  The poster (Paul Mifsud) showed off his W515-2 (Little Wonder) set.   While most collectors are quick to forget these, it’s not until you see the full set, with all of its colorful drawings together that the full beauty of the W515 shines through.  I asked Paul and he so kindly is allowing me to repost the images of his set here.  (Note, Paul also has a super cool collection of signed T206 cards that can be found at his website). 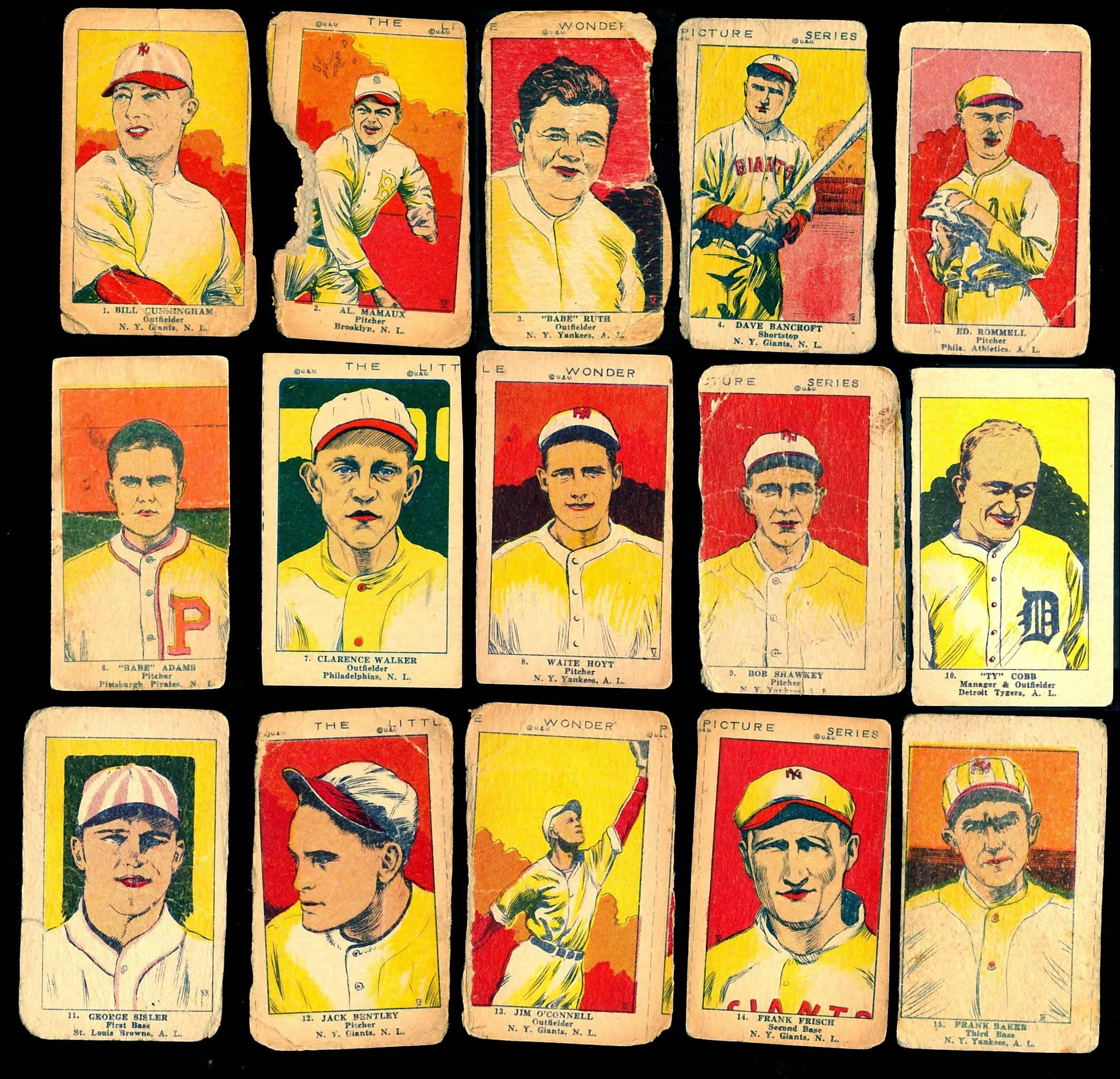 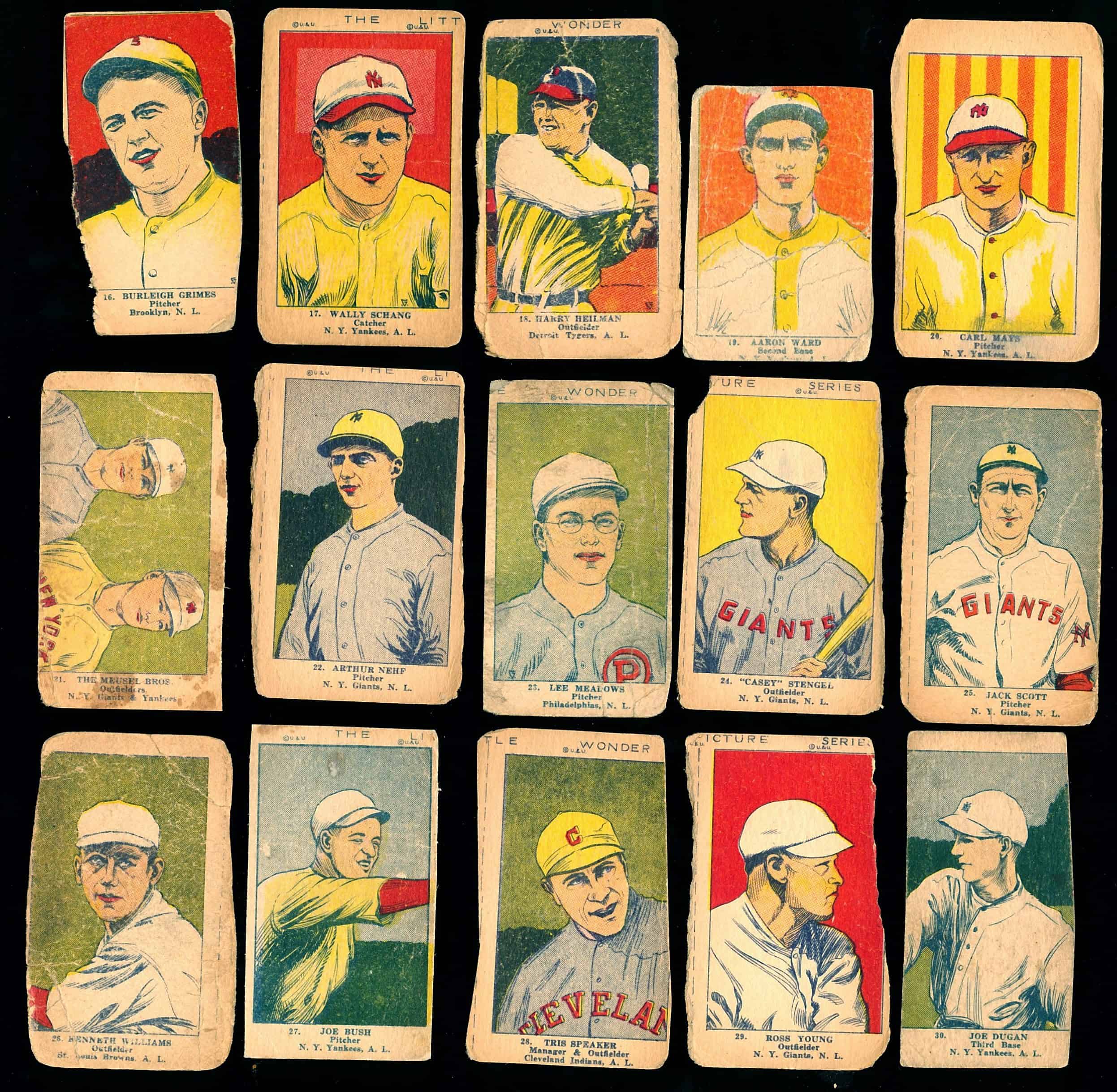 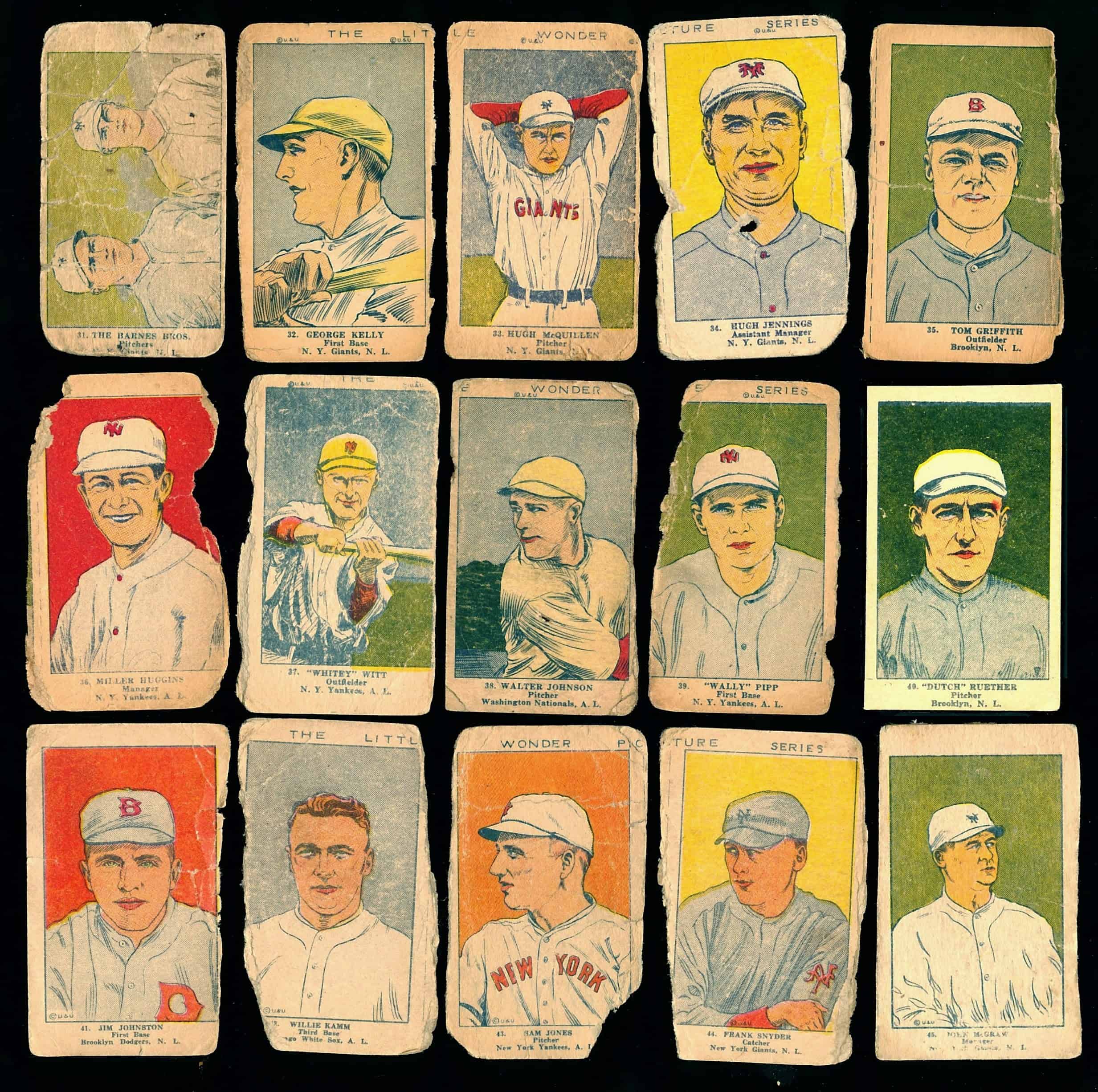 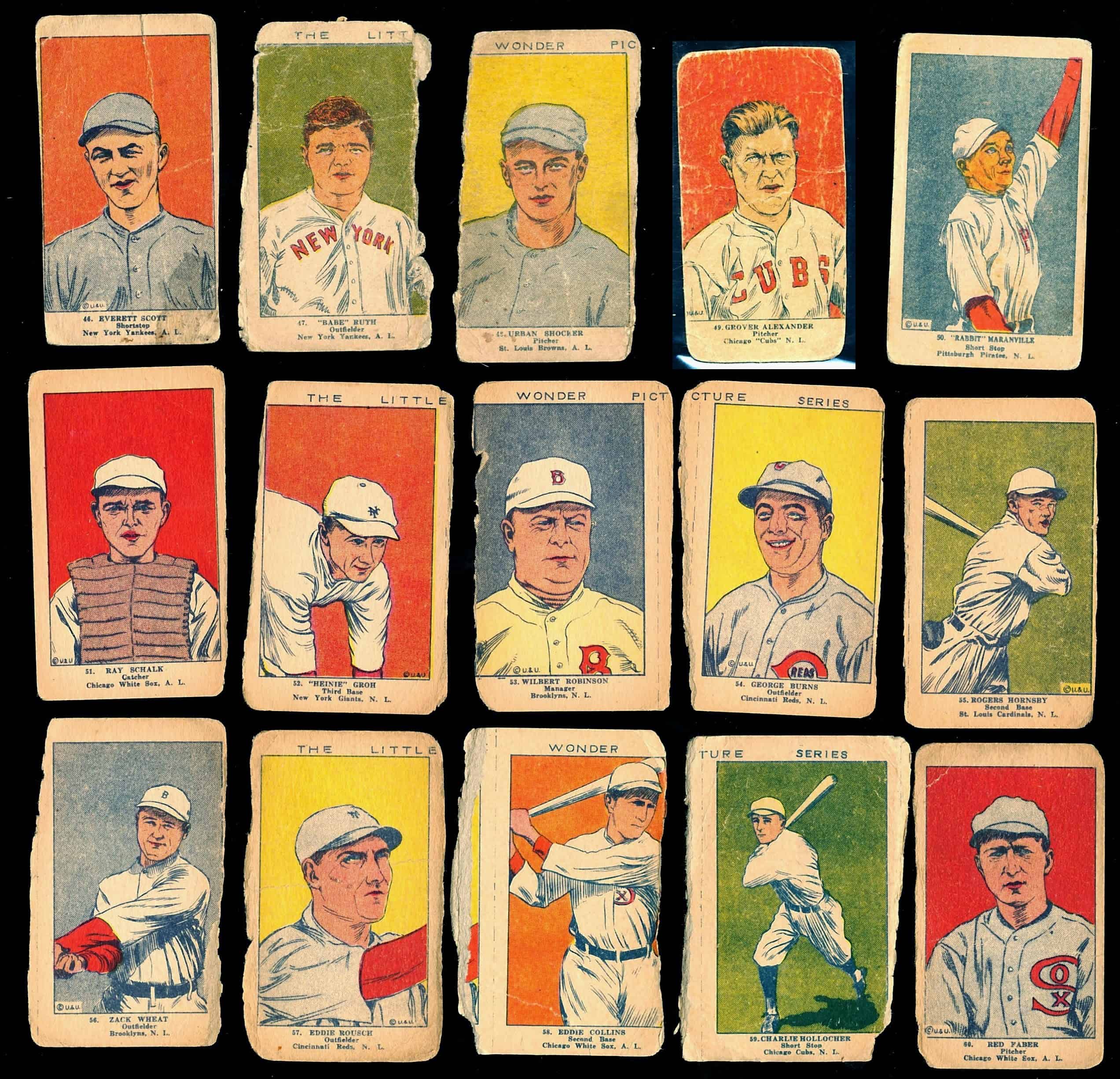 It’s interesting to note that the first twenty cards in the set sort of have a color scheme of their own–lots of yellow, orange and red, and even some funky backgrounds (check out the Carl Mays card).  The next 20 cards have a more nuanced color scheme with soft blues, greens, reds and yellows.   Then, the final 20 have some brighter color solid backgrounds.  All of it just adds to the mystique and allure of the set in my opinion.

Oh and as I alluded to in the intro, there on my count at least two celebrity look-a-likes in the set?  Can you find them?  Drop a comment below with your guesses.

As a whole, the W515 strip cards are available, not rare by any means, but certainly a more limited supply in comparison to say the T206 set.

PSA has graded 1,275 copies of cards from the W515-1 set whereas they’ve only graded 369 cards from the W515-2 set.  I can also tell you from experience that the Little Wonder series is much tougher to find and typically the #2 set carries a premium versus the #1 set.

As for the Babe Ruth cards, the same holds true.  Here’s a comparison in population between his two cards and the two variations.  It’s clear that the #1 series is more plentiful, yet at just around 60 cards graded by PSA, it isn’t exactly a widely available card.  Note that the T206 Honus Wagner has been graded 35 times by PSA, so not too far off the population with the W515 Ruth. 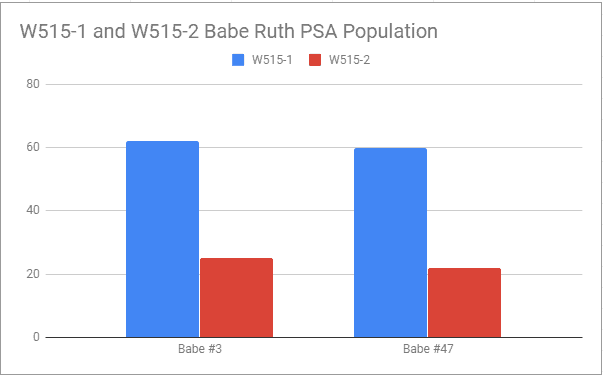 A W515 Ruth Card Was Featured On Pawn Stars

The W515 strips in my mind offer some of the best value in the hobby, especially for the cards of playing day hall of famers such as Ruth, Cobb and Walter Johnson.   I might be a bit biased, yet it still seems the overwhelming majority think strip cards are the ugliest cards to ever exist.

I’m willing to look past some of the crude cartoon like images, knowing that I can buy at a discount versus other more expensive (and plentiful) card issues.

Let’s examine the #47 Babe Ruth card from the set.

As detailed in the above section the W515-2 Babe Ruth card #47 has been graded only 22 times by PSA.  SGC has graded 13.  Note of course this doesn’t include any raw or uncut strips, but let’s say there are somewhere in the neighborhood of 50-70 in existence….let’s round to 60.

There have been 35 Honus Wagner T206 cards graded by PSA and 10 by SGC, so let’s say the total is somewhere around 50.

Thus, I think this chart below should show you everything you need to know.  With a near exact population, the T206 Wagner is worth nearly 700x as more (also i’m being pretty conservative with a $1 Million estimate for a Wagner T206 card) as the W515-2 Ruth #47. 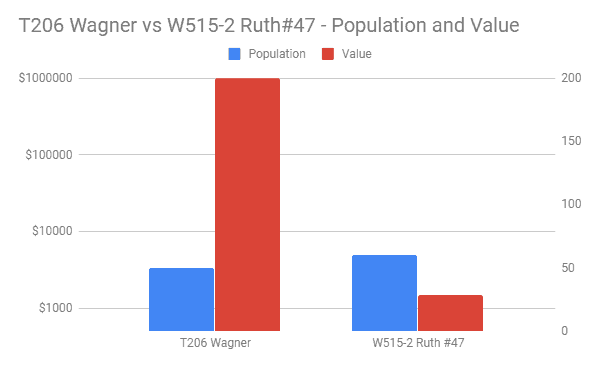 Thus, I’ll say it now.  I think the W515-2 Babe Ruth #47 strip card is the most undervalued card in the hobby.   And if you can’t find that one, the other variations in the set look like a great long term investment as well.

What do you think?  Drop me a note below.