The 1933 Goudey set gets all the fanfare for being the first card set to issue packs of cards with gum.

The 108 card set covered a three year period from 1934 to 1936, offering up real competition for Goudey.

The lack of serious collector interest likely stems from the omission of Babe Ruth and Lou Gehrig, contracted by Goudey at the time.

In this piece we take a closer look at the 1934-36 Diamond Stars set, showcasing the most valuable cards in the issue.

Cataloged as R327 by Jefferson Burdick in the American Card Catalog, the Diamond Stars set is an overlooked hobby masterpiece. Issued by National Chicle, a gum company based in Cambridge, Massachusetts, which also produced the 1934-36 'Batter Up' (R318) set. 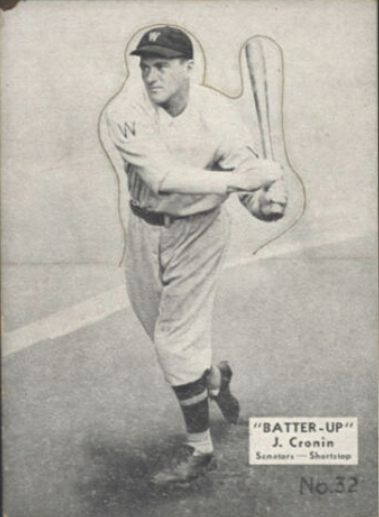 National Chicle eventually filed for bankruptcy in 1937 and was later acquired by Goudey.

One baseball card was found in each one cent Diamond Stars pack, along with a piece of gum.

The design on the front of the pack is reminiscent of the 'art-deco' design used on the cards themselves.

Here we see a bright yellow background with a massive red star along with a player illustration. I'm not sure if it's an actual player (but we can see Cleveland on the jersey). There were eight different wrapper variations. A wrapper from the 1934-1936 National Chicle Diamond Stars set

National Chicle also offered fans the chance to exchange 15 Diamond Star wrappers for an oversized (5" x 8") photo card. This was similar to what Goudey had done in 1933, although Goudey required kids to mail in the wrappers

The Diamond Stars wrapper alluded to 50 'photographic art pictures'. Yet, there are only 43 known National Chicle Premiums (R311) issued for baseball players. The 1934-1936 Diamond Stars cards were issued continuously over three years. The cards are well known for their unique, colorful designs.

The common description of the set is 'art-deco' which is known for "sleek, linear, often rectangular geometric forms, arranged and broken up by curved ornamental elements".

Novice collectors might not be aware of the beauty of Diamond Stars cards. But once you see all of the cards together, it's clear that National Chicle made some bold design choices.

Case in point, is this Bill Terry card. Check out the dark outlines of big buildings in the background and colorful shapes to accent the scene. 1. The cards were issued over three years and National Chicle made updates to player stats or team changes on the back of the card along the way.

Thus, with all the different variations, the 108 card set balloons to a total of 170 cards.

2. There are only 96 players that appear in the 108 card Diamond Stars set

Cards 97 through 108 are of players that already appeared in card numbers 1 through 96.

3. Card Backs printed with either green or blue Text

Trying to identify when a Diamond Stars card was printed might be one of the most confusing parts about this set.

Old Cardboard has a good checklist that details years and back colors.

Green backs were printed in both 1934 and 1935 so text coloring is not the giveaway.

Cards printed in 1934 are harder to find than the other two years and do carry a slight premium.

In the case of the first Cochrane, if you read the stats, we see it is referencing stats from 1934 so it is a 1935 issue.

The blue text Cochrane references stats from 1935, thus it is considered a 1936 issue. 1935 Diamond Stars Cochrane with a Green Back 1936 Diamond Stars Cochrane with Blue Back

The player stats are sparse, but Diamond Kings offers a very lengthy writeup, offering kids different baseball tips. In the case of the Cochrane, we can see it discusses 'The Catcher's Throw'.

Note the tip corresponds with the player's position. The tips were authored by Austen Lake, a writer for the Boston American, who was well known for his negative writings about Sox slugger Ted Williams.

5. There Are Two Popular Error Cards In The Set

Card #36 of Ernie Lombardi is misspelled 'Earnie' on the back of one variation.

Card #54 of Hank Greenberg is misspelled 'Greenburg' on the front of one variation.

Both error cards are harder to find and carry a premium versus the corrected version. 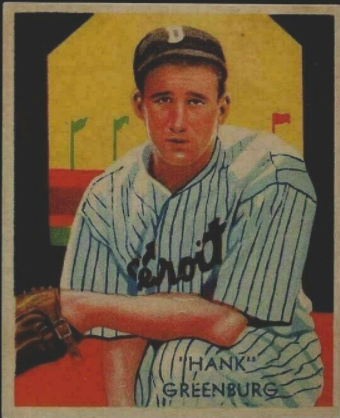 Here are the most valuable cards in the 1934-36 Diamond Stars Baseball set, with values from the PSA SMR Price guide, using PSA 7 (Near Mint) prices as a guide.

Lower graded copies of nearly all the cards here are somewhat affordable, so piecing together a complete set is doable.

But, if going after the 170 different variations in the set, completing it can be somewhat pricey.

Note that PSA refers to the set as '1935 Diamond Stars' so we will use that from here on in. Lefty Grove was one of the best left handed baseball pitchers to ever play the game, winning over 300 games during his 17 year career.

Grove's Diamond Star #1 card is the most valuable card in the set.

Given his HOF status and star power, the card is highly sought after, but its position as the first card in the set amplifies the value.

Cards at the #1 position were tortured by kids, stacked up, susceptible to more damage, making it very hard to find in nice condition.

There are over 200 graded copies of the Grove #1 card, so it's not as rare as the high number cards, but still pricey in higher grades.

National Chicle goofed on two cards in the set - the #54 Hank 'Greenburg' error card shown here is one of the two major errors in the set. New York Yankees HOF Catcher and Manager Bill Dickey was a member of an amazing seven World Series teams as a player and another six as a manager. Bob Feller called Dickey 'the best catcher' he ever saw.

Hence the reason Bill Dickey #103 is one of the most valuable cards in the set.

Traynor is one of the best third basemen in baseball history.

The "Pie" Traynor Diamond Stars #99 card is one of the short print high numbers in the set. There are less than 30 PSA graded copies, making it one of the harder to find cards in the set.

Still, even with the scarcity, the card is affordable, with lower grade copies sometimes found for under $500. A great deal for a card of a HOF player not produced in very significant quantities.

Note that Traynor has an identical, more widely produced card #27 that is identical to the #99 card.

One of the greatest power hitters to play the game, the Diamond Stars card of Jimmie Foxx is a bit of an abnormality.

While Foxx started out his career as a catcher, he played the majority of his career at first base.

Hence, this one has a bit of a cult following among vintage card collectors.

I selected the Diamond Stars Foxx card as the most underrated card in the set.

Foxx is generally underrated as a player so this selection makes sense. Foxx was a three-time MVP and a nine-time all star game selection. He was a triple crown winner with an astounding twelve straight seasons with over 30 home runs. 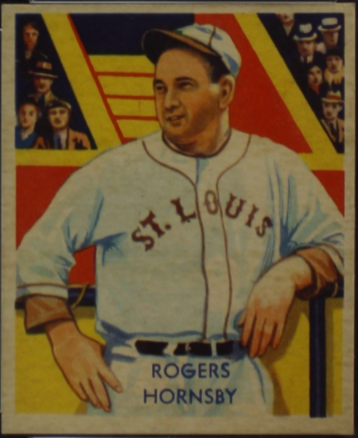 HOF slugger Rogers Hornsby played a remarkable 23 seasons in major league baseball. At the tail end of his career, Hornsby played little and was acting as a player/manager for the St Louis Browns.

Hornsby's card has 780 PSA graded copies, making it the card with the highest PSA graded population in the set. The Diamond Stars #97 Lopez card is a high number short print and has a fraction of the graded cards compared to his #28 card.

I also chose the Lopez as the best design in the set. I'm a sucker for horizontal designs and the action shot is one of the highlights. 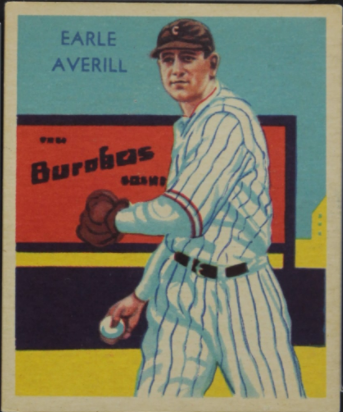 HOF pitcher Earl Averill has two (identical) cards in the set, #35 and #100, but the #100 is a more valuable and scarcer high number card.

Thus, there is a significant price difference between the two, although mid-grade copies of #100 Averill are still relatively affordable.

Side note, Earl Averill's name is misspelled 'Earle' but the error was not corrected. 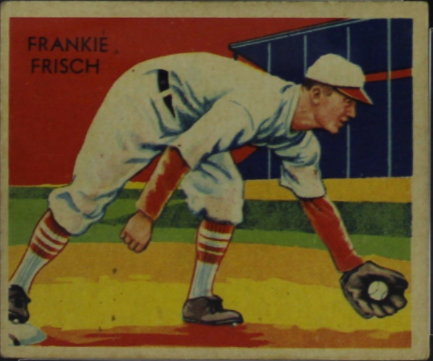 Frankie Frisch was a solid hitter, with blazing speed and great defensive abilities. The HOF second baseman was a key cog on four World Series Champion teams, including the Giants and Cardinals.

His Diamond Stars #17 card is somewhat scarce compared to other more plentiful cards, with only ~170 PSA Graded copies. Card #36 was misspelled 'Earnie' and later corrected. The error is much harder to find, with roughly 1/4 of the graded population (104 PSA graded error cards vs 420 PSA graded corrected versions).

Lombardi's #105 card is a short print and actually harder to find than the error #36, with only 26 PSA graded cards in existence.

The 1934-36 Diamond Stars Baseball Card set is one of the most underrated sets of the pre war era.

Famous for its colorful, art deco like designs, the 108 card set is filled with 35 Hall of Fame cards.

No Ruth or Gehrig here, but there's enough HOF power to keep most vintage collectors happy.

Diamond Stars cards are an excellent investment, especially scarcer issues (such as the 'Greenburg' error) or the high number short prints.

High grade copies of HOFers in the set are also a very good choice for collectors looking for potential capital appreciation.

Overall Investment Rating: 7.5 out of 10