How To Spot A Fake 1952 Topps Mickey Mantle Card 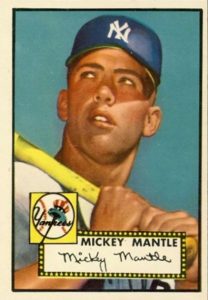 The 1952 Topps Mickey Mantle card is one of the most iconic and valuable cards in the hobby.

A Gem-Mint condition copy of the card sold recently for $12.6 Million, shattering all records.

It’s not even a rare card, as it was double printed by Topps, even even though thousands of the high series 1952 Topps cards were dumped into the Atlantic ocean.

And while it is Mantle’s first official Topps issue, it’s not technically his rookie card (that award would go to Mantle’s 1951 Bowman card), although many often refer to it as such.

As with all desirable cards, there exists a fairly prominent counterfeit market trying to dupe vintage collectors into believing their fakes are the real thing.

Any collector making such a big investment into a Mickey Mantle baseball card needs to know the facts.

So, with this guide, we break it all down. Let’s examine the 1952 Topps Mickey Mantle card and help distinguish a real one from a fake.

How To Spot a Fake 1952 Topps Mickey Mantle
Differences Between Type 1 and Type 2 1952 Topps Mantle
Known Counterfeits and How To Identify Them
Type Two – Missing Dot and Black Bat Marks
Type Two – No Noticeable Missing Print Marks
Dark Green Backgrounds
Type One – Missing Bat Marks, Intentional Aging
Watch Out for Mantle’s in Fake ‘Flips’
Using Black Light and A Loupe
Where to Buy a ’52 Topps Mantle

Topps issued two versions of the #311 Mickey Mantle card in its 1952 Topps set.  There are several variations between the two cards and we highlight these differences below.  If you’re in the market for a ’52 Mantle, then you should definitely get up to speed on the two different cards. 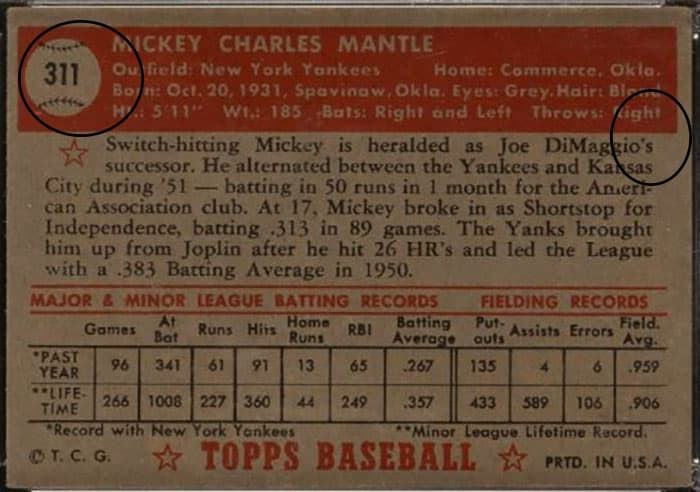 Back of a Type One 52 Topps Mantle 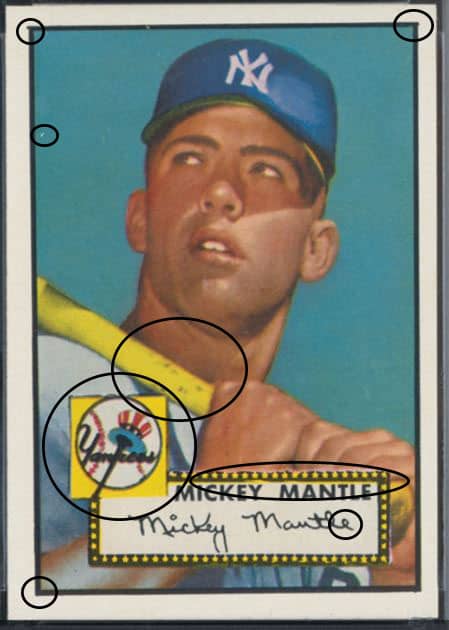 Known Counterfeits and How To Identify Them

Given that there are actually two different types of 1952 Topps Mantle cards it makes for a bit more of a challenge in identifying a fake.  Thankfully we’ve seen plenty of different fake versions of the card, thus, we hope these examples help.

First things first, look at the section above and know how to distinguish between a Type One and a Type Two Mantle.  So, when you get that card in front of you, you’ll know exactly what it is you have to look for. 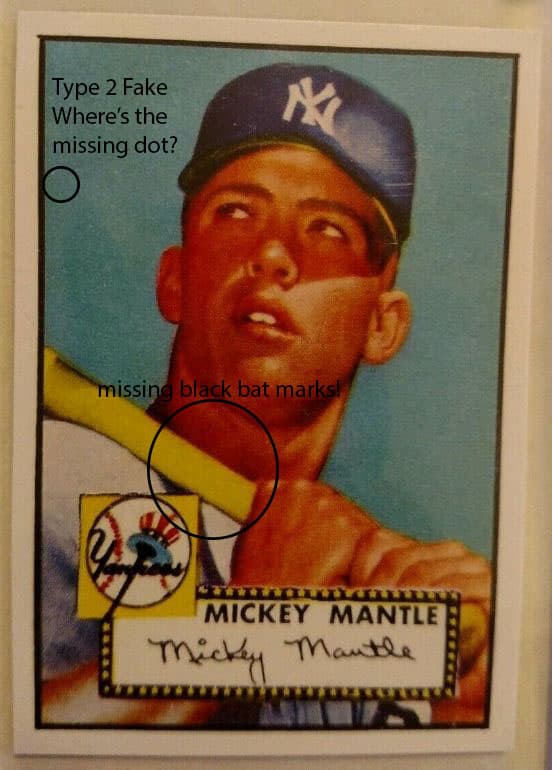 This one was obviously reproduced as a ‘Type Two’ Mantle.  I can personally see that this is a fake from a mile away.  The pristine corners, the whiteness of the card..all a dead giveaway.  But even if you aren’t that skilled in authenticating, you would be able to tell from two small nuances.  That missing blue dot isn’t there.  In addition, the black marks on the yellow bat are missing.  Thus, this is a fake and notably a pretty bad one.  If this one tricked you, go back and examine the two real cards!

Here’s a Type Two fake that’s a lot harder to authenticate.  The dot appears to be there, although hard to decipher from the photo as to whether the card was edited to force he missing pixel or if it was printed that way..  The bat has some noticeable scuff marks, which is odd, and could have been done to obscure some missing blocks of black on the bat.  The card is perfectly centered as well, and for a lot of the fakes, the fronts are perfectly centered, while the backs are off-center (which is the case with this forgery).  One of the biggest red flags would be with the corners which look as if they were artificially rounded, likely with some sandpaper; just doesn’t look like natural corner wear and tear for an 70+ year old card. 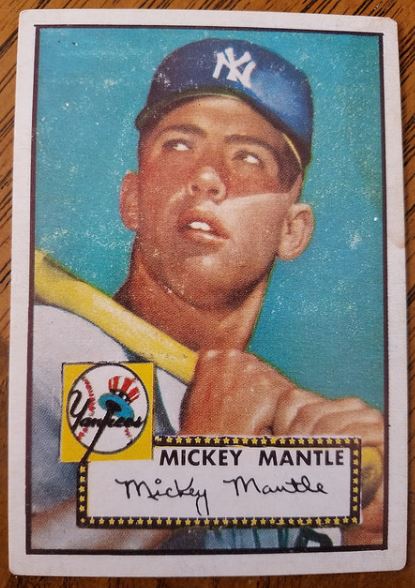 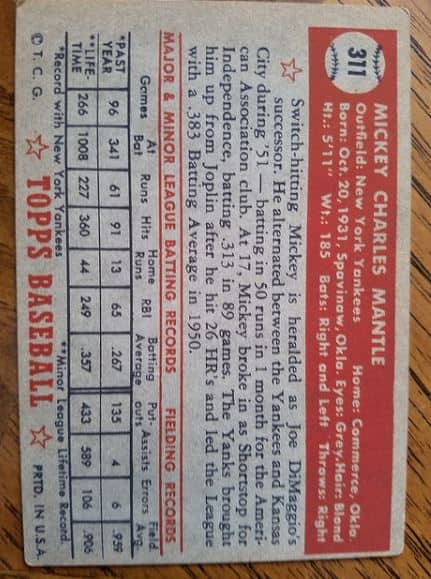 Have seen a lot of fakes that have a darker green background as opposed to the the blue backgrounds seen on the originals.  This one here was a recent eBay auction which duped an unsuspecting buyer.  Not only is the background too dark, but there are other obvious warning signs.  The front looks like it was intentionally ground down, likely with some sandpaper and the corners look like they were artificially aged as well.   Whenever i see those sharp corner cuts like on that top left corner I always think it’s a fake.  Just seems like a common trait among vintage card scammers. 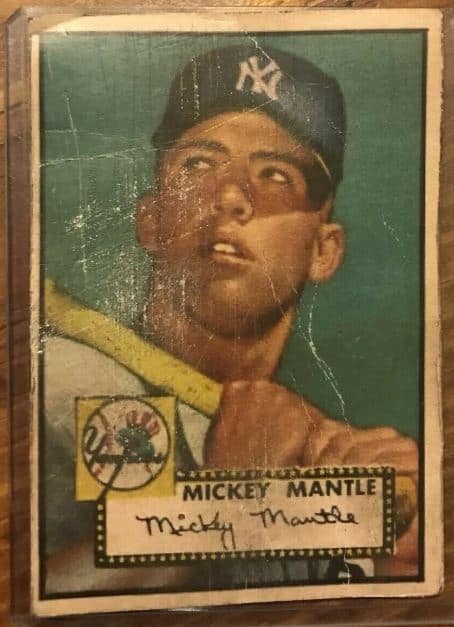 Here’s a Type One Mantle that is missing the black print marks on the bat.  In addition, look at those scuffing marks on the card.   It’s quite rare to see marks like that on a vintage card; certainly looks very intentional in my opinion.  Plus those corners look very intentionally rounded.  Note this card was listed for $5000 on eBay. 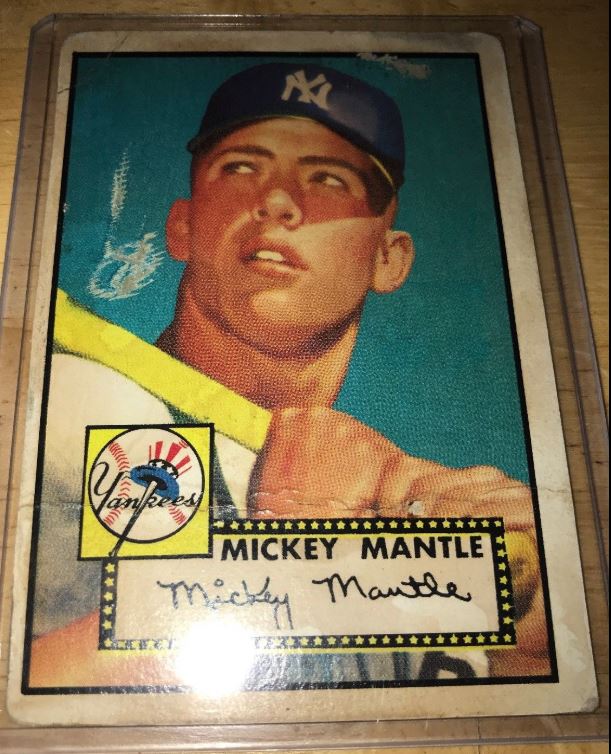 Watch Out for Mantle’s in Fake ‘Flips’

A lot of scammers will resort to replicating graded cards by doing either one of two things.  Some will create fake holders and fake ‘flips’ (or labels) and insert a counterfeit card.  In this case they will print an actual cert number on the flip, duping anyone that looks up the card’s cert number on any of the grading company websites.  Some actually resort to cracking open legitimate cases of a real card, taking out the real card and replacing with a counterfeit.

Here’s one example of a fake holder and flip that were discovered by the folks at Net54.  The card holder and cert number was copied from a real PSA graded Mantle card.

Here’s the real one as graded by PSA that they were copying.  You can see the differences in the card, notably the real card has a white print defect on the top right middle of the card.

So, not only do we have to look out for countless forgeries when looking at raw cards, we have to be on the lookout for fakes in PSA and SGC holders.  The best thing you can do, even if buying a graded copy is to scour old auction listings for past sales to make sure that your card looks like the one that was sold prior to your transaction.  I suggest checking out our counterfeit guide to also get some helpful tips for dealing with eBay sellers.

Watch Out For Fake Miscut Mantles

I’ve seen several of these cards pop up on eBay and Facebook lately, so someone somewhere has been creating these.

These are definitely fake and have been artificially aged.  The paper is wrong and the coloring is off.   I have never seen any Mantles this miscut that are showing the Jackie Robinson text on the back.  These two cards were next to each other on the original sheet, so it is possible, but if you see one that looks like this, beware.

Using Black Light and A Loupe

If you have access to a black light and a loupe, and you are able to examine the Mantle in person, you should be able to get a quick idea as to the authenticity of the card.

First, if we take a look at the Mantle under a 10X magnifying loupe, we should notice a few important things.  Typically most fakes are printed in all half-tone ink.

Thus, if we look at a fake under magnification, these areas of the card would normally show up in a dot-matrix type of effect as opposed to the solid ink which would appear on the original card.

If you have a black light, go into a dark room and shine the black light on the Mantle.  If it fluoresces, you likely have a fake on your hand.  And you’ll be amazed at what you might be able to pick up with the black light.

Here’s an example of a 1952 Mantle that was shown under black light to have been significantly restored.

Where to Buy a ’52 Topps Mantle

First, even though we have shown you how to detect a forgery, don’t think you can rush out today and buy a raw Mantle.  Especially on eBay.  There are forgeries galore on eBay.  You have to be super careful, although eBay’s new Authenticity Guarantee program does help.

I would tend to recommend buying a graded Mantle before anything else, especially from someone with a trusted reputation.  Check out vintage auction houses to see if they might have any listings coming up soon.

This isn’t to say I would avoid eBay, as it remains the most accessible marketplace for all vintage cards, and Mantle 52 Topps cards are always listed for sale.   Just stick to those with feedback near 100, and you might find yourself a deal.

Occasionally you might come across a raw or graded Mantle at your local card show, but normally the asking prices are way too high, but you could get lucky and find a dealer looking to sell off the card.   We’ve listed some of the latest Mantle auctions at eBay below to give you a head start.