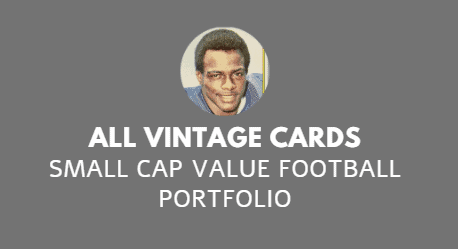 The All Vintage Cards Small Cap Football Portfolio is a portfolio of ten lower-priced vintage football cards that we think could be solid long-term investments.

As we discussed in our introduction, we are launching three portfolios for each major sport–Large Cap, Mid Cap, and Small Cap.

For this All Vintage Cards Small Cap Value Football Portfolio, we have selected ten cards, each with a value of $1000 or less.

I will also note that this information is not investment advice, nor are we making any promises about future performance.  Please use your own judgment and budget when accounting for any acquisitions of cards in this portfolio. 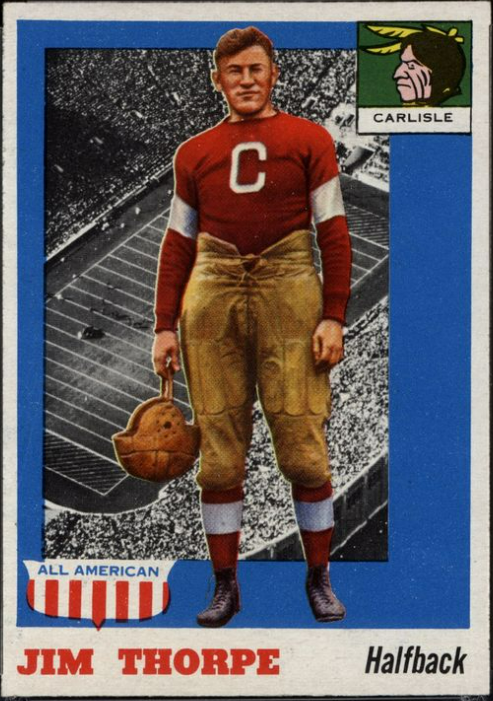 Why We Selected It For The Portfolio: Considered to be one of the world's greatest multi-sport athletes, Jim Thorpe was a legend among legends in nearly everything he put his mind to.  His 1955 Topps All-American is not a playing day card, and more of a tribute - the set consisted of former Heisman Trophy winners and Hall of Famers.  Still, I really love this card, and it's a cheaper way for those that can't afford his 1933 Sports Kings card.

Current PSA Population: PSA has graded roughly 1400 of the Thorpe All-American card, so not technically scarce.   We've chosen a NM copy---less than 400 have been graded PSA 7 or better--thus we like the higher grade copies as a longer term investment. 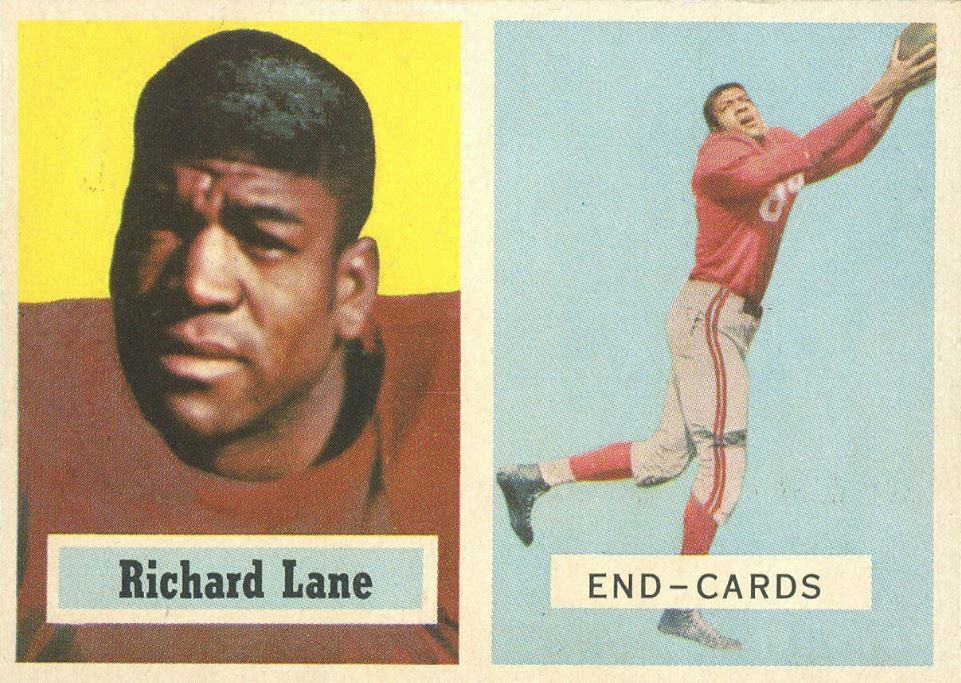 Why We Selected It For The Portfolio:  Some might not be familiar with Dick “Night Train” Lane, who in his thirteen year playing career was known as one of the most feared tacklers in the game.  The NFL even instituted new rules, mostly because of the play of Lane to keep offensive players safe.  His 57 Topps rookie card is overshadowed by many of the big time QB rookies in the set, but we like Lane's rookie as a undervalued gem.

Current PSA Population:  A Mint Lane rookie card is valued today at $12,500; note that PSA has only graded 3 Lane Rookie cards as a PSA 9 (although over 900 in total).  Lane’s rookie in NM condition can be found for less than $300, a true bargain in my opinion. 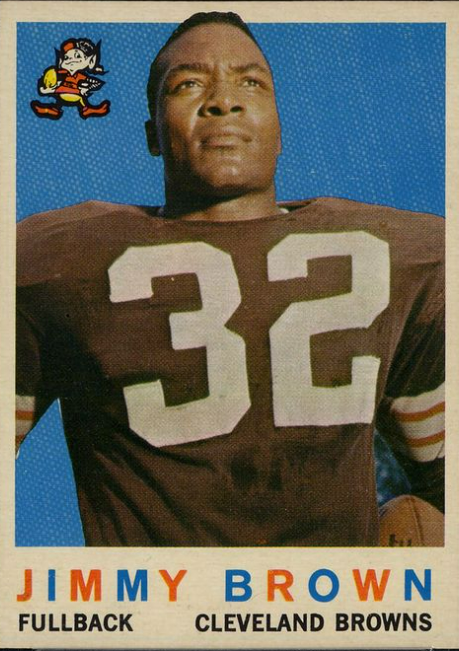 Why We Selected It For The Portfolio: Jim Brown was easily one of the best running backs to ever play the game of football.  I like his rookie card for a long term investment, but think his second year 1959 Topps card is relatively undervalued.

Current PSA Population:  PSA has graded over 2000 copies of Brown's second year card--thus lots of copies out there!  Stick with a higher grade copy for better investment potential. 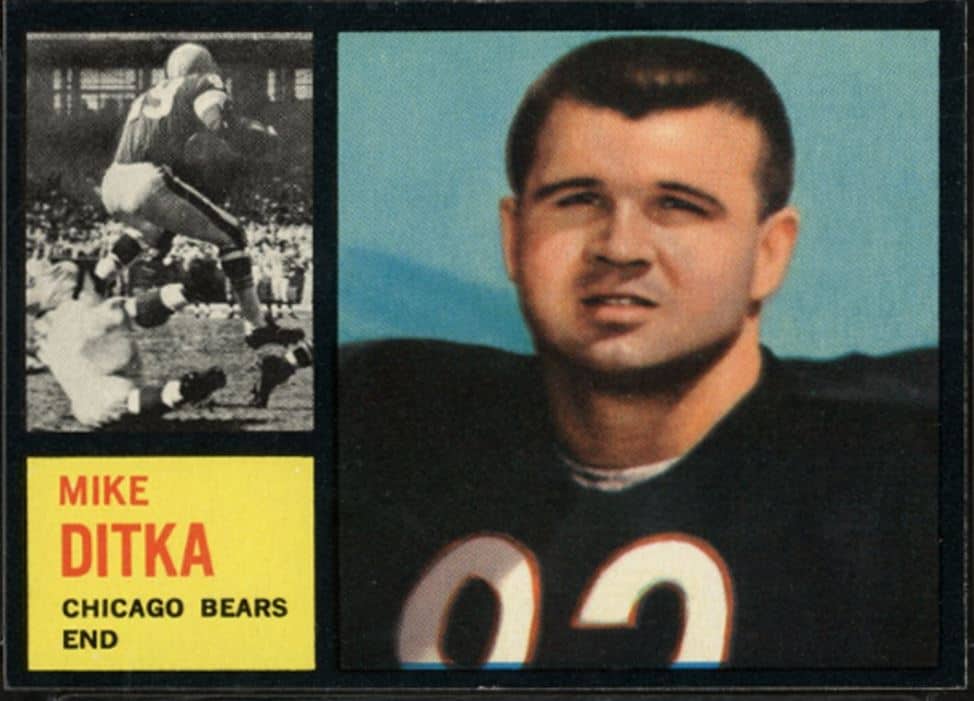 Why We Selected It For The Portfolio: Some only know Ditka as the long-time coach of the Bears, but many don’t realize that Ditka was a star tight end and was actually the first tight end elected to the Hall of Fame (in 1988).  His ’62 Topps rookie card features a young Ditka as a member of the Bears.  Ditka would go on to have a fantastic career, amassing 427 receptions, 5,812 yards, and 43 touchdowns as a pro.

Current PSA Population:  The 1962 set is prone to condition issues because of the black borders and the Ditka is no exception; only 4 PSA 9’s (without qualifier) exist and the issue is on the higher end of scarcity with a total of 730 Ditka rookies graded by PSA.  If you are looking for something in the Good to VG range you can normally find one for under $300. 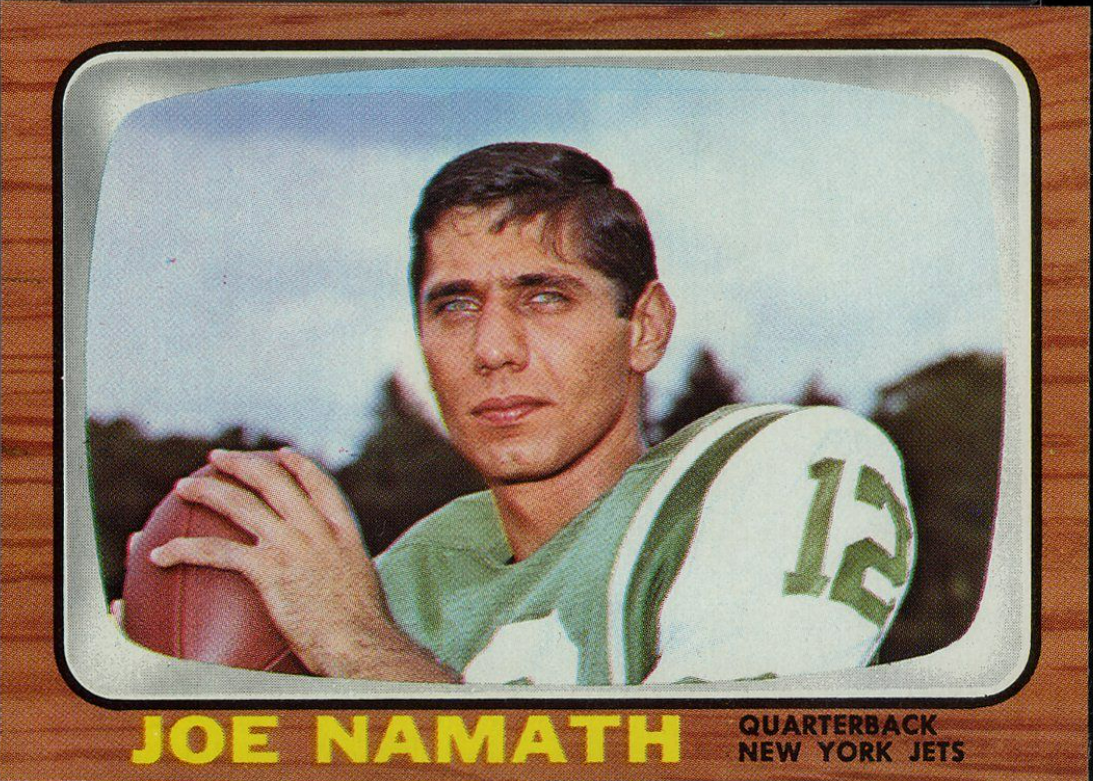 Why We Selected It For The Portfolio:  The second year card of Joe Namath in a TV set based 1966 Topps Set which is a close copy of the 1955 Bowman baseball set.   This is a classic card, and if you don't have the cash for Namath's rookie card, this is a great second option and one that we thought was worthy of a place in our Small-Cap portfolio.

Current PSA Population: Only around 1000 have been graded by PSA, so not terribly overpopulated.  Opt for one in high grade for better investment potential.  We've chosen one in NM condition which can be found for less than $600. 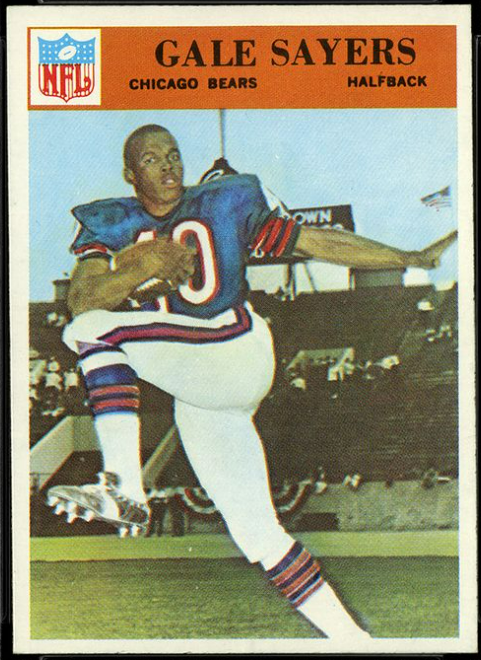 Why We Selected It For The Portfolio: The 1966 Philadelphia Gum set is one of the most popular in the hobby, due to the slick and clean design, along with the rookie cards of both Dick Butkus and Gale Sayers.  PSA has a great writeup of the set which discusses how Philadelphia Gum won the rights to produce NFL football cards (away from Topps) from 1964 to 1967.  Note Topps was only allowed to produce AFL player cards during these years.

Sayers is considered to be one of the best running backs to play the game and we like this one as a very undervalued play in vintage football.

Current PSA Population:  PSA has graded in total nearly 2000 Sayers rookie cards, so a rather significant supply for his card, hence the reason we went with a NM copy at $800, but if you want a lower to mid grade copy you should be able to find one for less than $500. 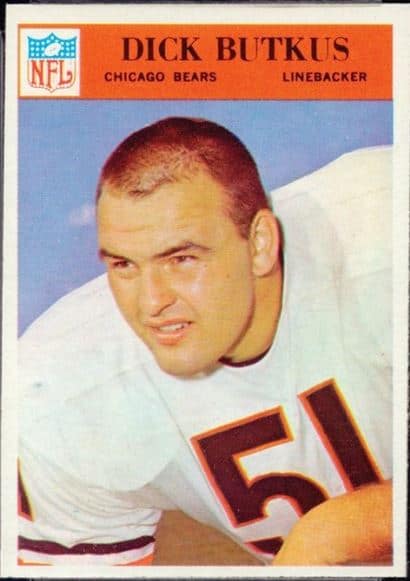 Why We Selected It For The Portfolio:  The Lew Alcindor second year card from the 1970 Topps set is actually the most valuable card in the set, yet still generally underappreciated in my opinion.

Current PSA Population: The relative scarcity versus the Gale Sayers rookie card from the same set, gives the Butkus the advantage from a value standpoint.  PSA has graded in total nearly 2000 Sayers rookie cards, whereas less than 1000 Butkus rookies have been graded.   A Butkus rookie in good to excellent condition can typically be found for around $300. 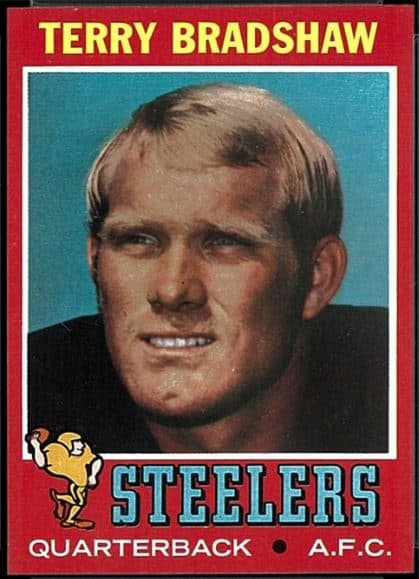 Why We Selected It For The Portfolio: Most young people know of Terry Bradshaw for his off-the-field NFL broadcasting work, but on the field, Bradshaw was one of the all-time great quarterbacks.  The 1971 Topps set is one of my favorites–I just love the colors and the lettering design on the cards.  The red borders make for easy chipping, thus mint condition cards are much harder to come by.

Current PSA Population: PSA has only graded 20 PSA 9 copies, with 3 PSA 10 (Gem Mint) all the while grading a grand total of over 3000 Bradshaw rookie cards.  Thus f you want a Bradshaw rookie in a lower grade it will be easy to find and relatively inexpensive.  I found a few on eBay in Good to Excellent condition for between $100 to $200. 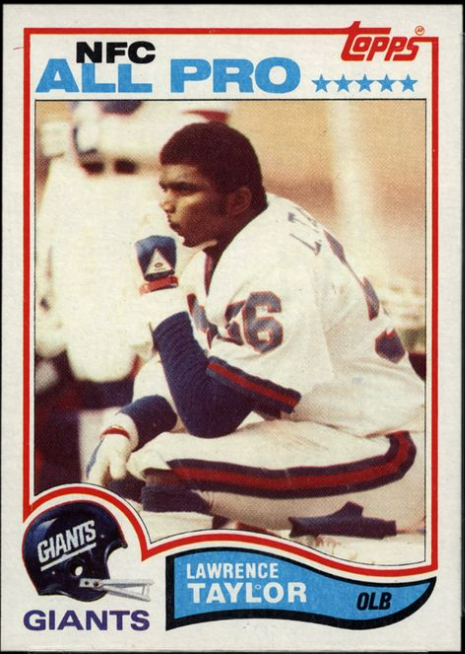 Why We Selected It For The Portfolio: Certainly one of the best defensive players to play the game, Lawrence "LT" Taylor was one of the most feared players on the field and one of the most charismatic off the field.  His 1982 Topps rookie card is the cornerstone of the set along with other defensive stalwart rookies such as Ronnie Lott.  A must have in high grade condition for vintage football collectors.

Current PSA Population: PSA has graded over 5000 copies!  So, of course, it's hard to make a recommendation on a card with that sort of supply...so we've targeted a MINT copy --of which PSA has graded less than 20% or less than 1000 copies in Mint Condition. 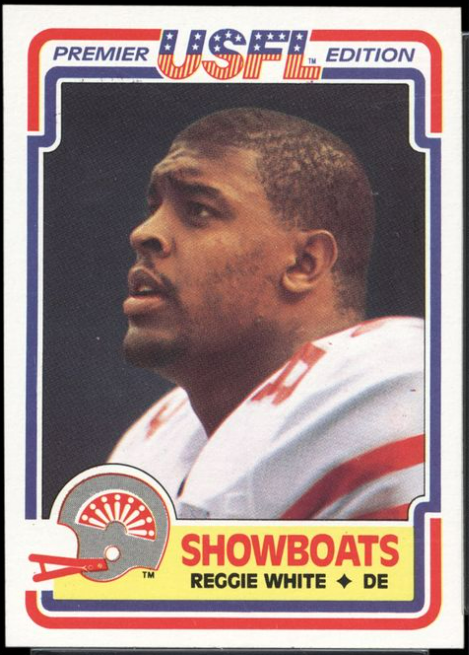 Why We Selected It For The Portfolio: Another defensive stud, Reggie White was the cornerstone Defensive End for both the Eagles and Packers over his fifteen year career.  White spent his first two professional seasons in the USFL, thus his 1984 Topps USFL card pre-dates his 1986 Topps rookie card.

Current PSA Population: White's 1984 Topps USFL card has been graded around 2000 times by PSA.  Not rare, thus why we went with a MINT condition card as a part of this portfolio.