As we always like to do in the guides, let's first take a look at an authentic 1987 Fleer Michael Jordan #59 card.  It is this step that it one of the most important in helping identify any fakes---understanding everything about the authentic card is key to not getting scammed.

The print used to create these more modern era cards consists of a combination of halftone and solid ink printing.

Here we can see at the top of the 1987 Fleer Jordan, the halftone (dot like printing) in the gray background in the typical sort of checkerboard fashion.  In other areas--namely the 'Fleer' and 'Bulls' text, we can see how the print is a standard solid ink with no screening pattern. 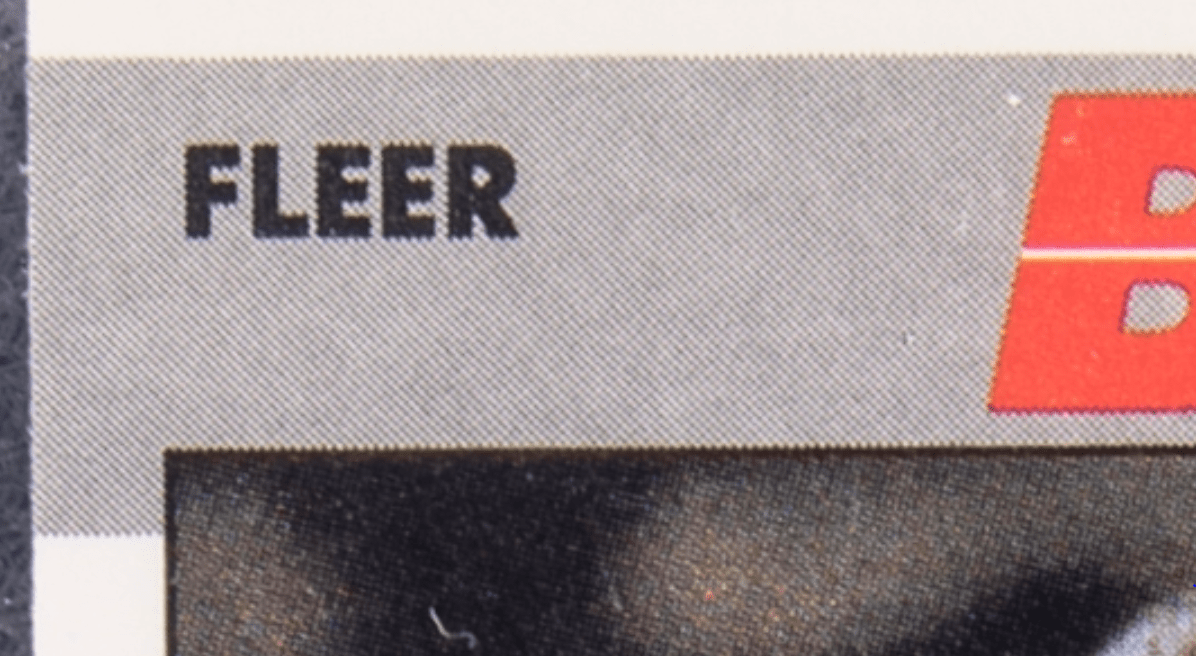 Side note - this is a great article about printing of the 1985 Fleer baseball set.

Here are two more closeups of the bottom border, and Jordan text:

Closeup of an authentic 1987 Fleer Jordan, note the Grey halftone, checkerboard printing in the background

Ok here's a view the back of a 1987 Fleer Michael Jordan card.

Note this image is shown in a very bright scan, helping to detail some of the areas of the card. 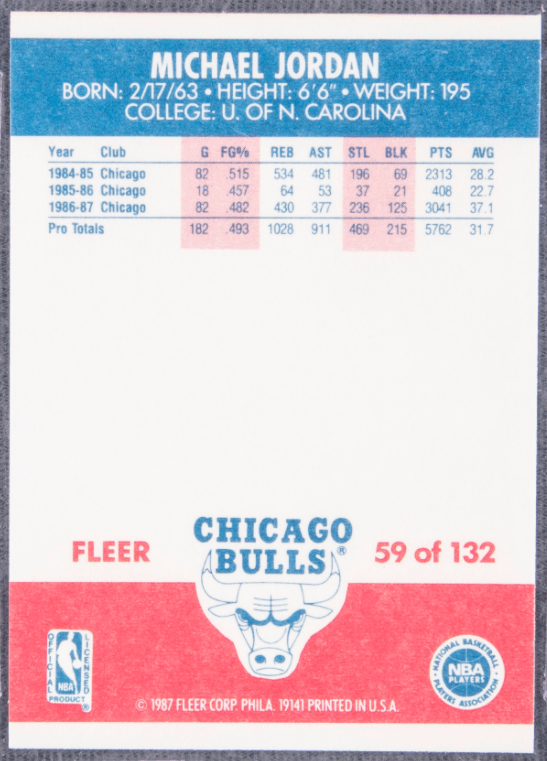 Back of an authentic 1987 Fleer Michael Jordan

I think the most noticeable thing here is how the ink looks a bit faded especially in the top blue background and on the bottom where there is red ink.

I wasn't sure of this reason initially and found this nugget from Nick Vossbrink over at the Sabr Cards blog:

Up until Score in 1988, card sets were printed on what’s called C1S (for coated one side) card stock. The coated side is white and doesn’t absorb ink as much.

Anything that is printed on an uncoated paper will be absorbed and the ink will bleed/saturate more into the paper.  This is why on the 1987 Fleer card, the backs of the card have a blotchy look.

Ink does not get absorbed into the fronts (or the coated part of the paper) since it "sits" on top of the coating of the sheet and will therefore have a much cleaner and refined glossy look.

This is important in trying to recognize a fake card.  I'm showing the top and bottom photo of the backs of this card as well.

Bottom half of a real 87 Fleer Jordan card.

Here's a view of a different authentic 1987 Fleer Jordan, and we can see that the print is a little bit darker on this one, mostly due to the fact that the scan used normal light and didn't brighten the colors.

Beware of this when looking at eBay listings--scan quality and lighting can sometimes make a real card look fake, or more importantly make a fake card look real.   Still we can see how the ink, although it looks darker, is still a bit faded.   Also to note, Fleer had a lot issues with clarity and registration in the 1987 set. 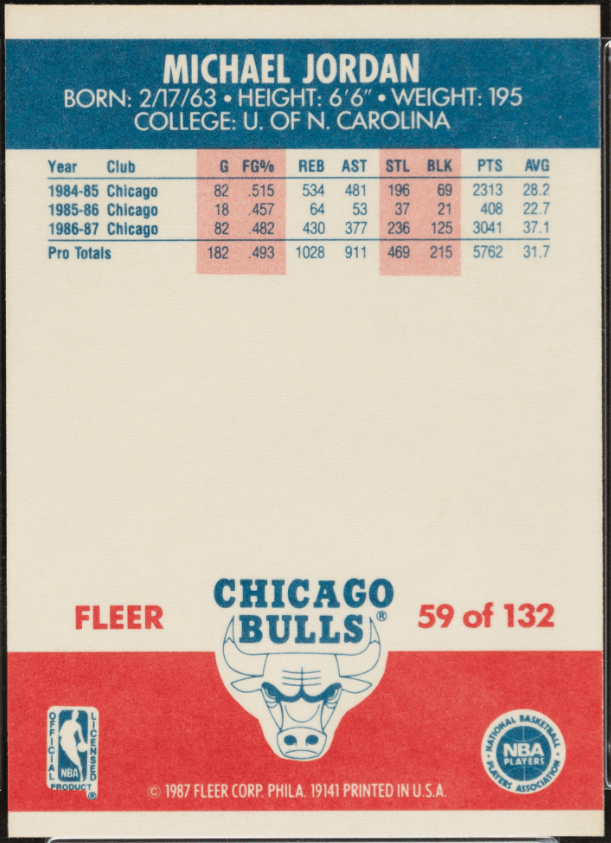 Another back of a real 1987 Fleer Jordan 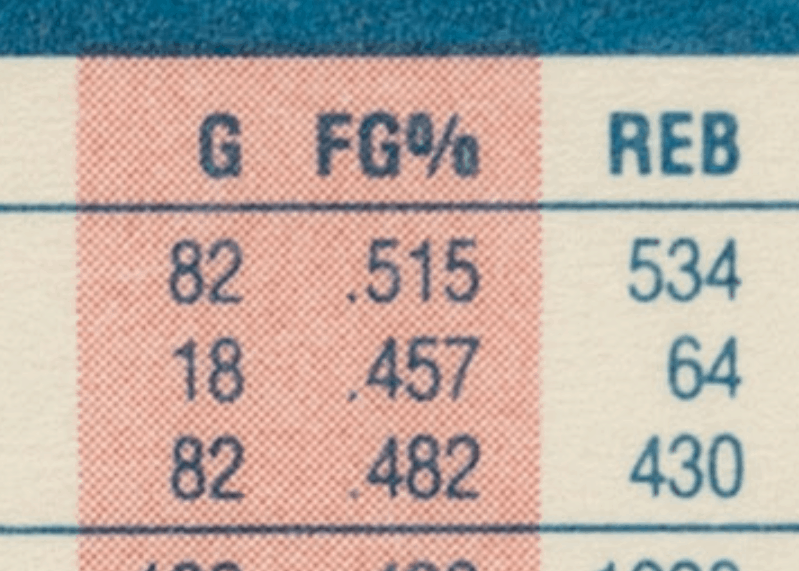 Oh how history repeats itself!  You might be familiar with some of the key areas to examine on the 1986 Fleer Jordan rookie card.  Well, get ready, because the 1987 Fleer card has many of the same distinguishing features that we can examine to help identify a fake. 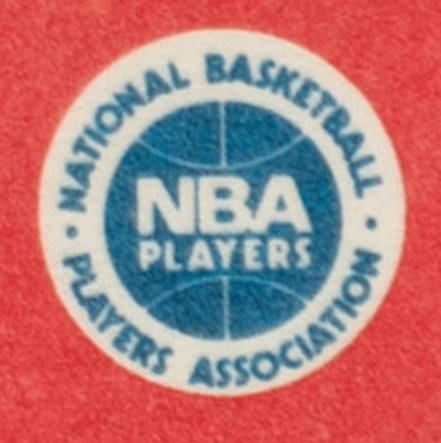 You might also recognize the bull logo from the 86 Fleer card---once again, the same logo is used for Jordan's 1987 Fleer card.  We should see consistent, bold print in the lettering and we should see clearly defined lines in the bulls eyes.  If that white space in the pupils is missing, it is clearly a fake. 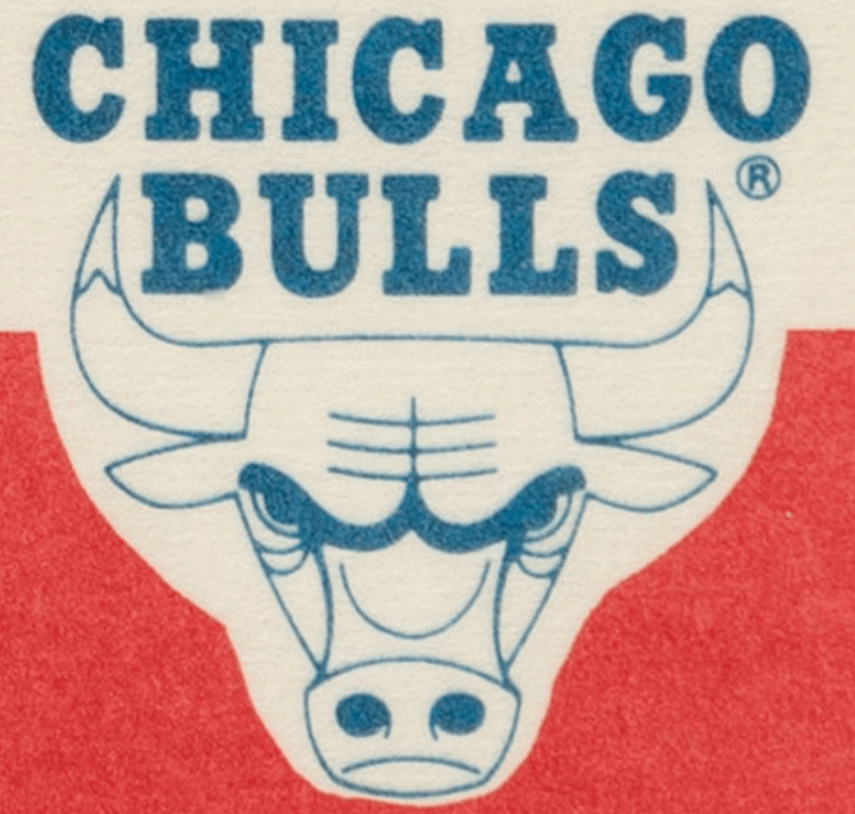 And again, the NBA logo in the bottom left order.  See the clean bold blue used for the player background and text.  Any fakes will have a clear fuzziness to the lettering without the same sort of clear definition. 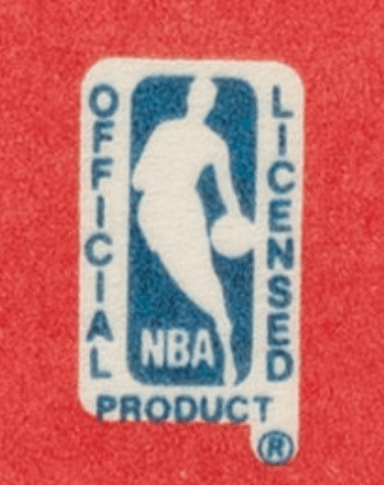 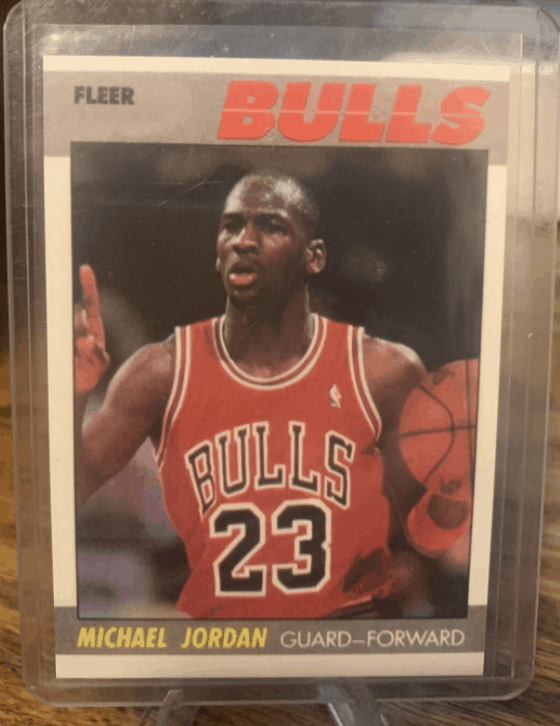 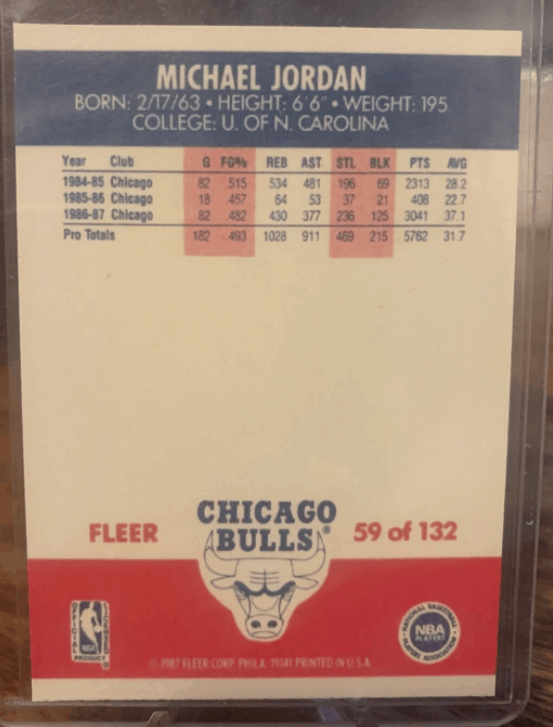 Back of a fake 87 Fleer Jordan card.

Sad to say, but as I was writing this piece, I came across an eBay auction for what appears to be the same Jordan counterfeit.  The card sold for $1899!!! This makes me sick to my stomach.....and this my friends is why I write these resource guides. 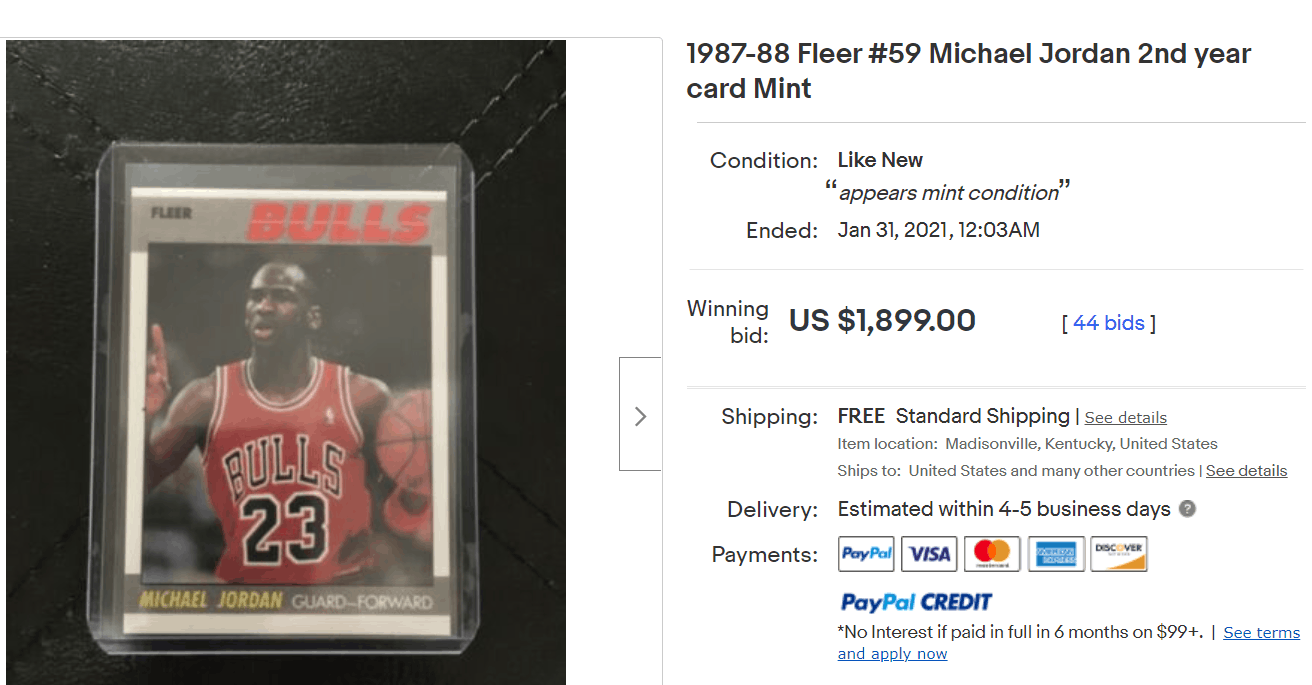 You can just see it a mile away on this one---the front picture quality is quite poor compared to an original and if we zoom in on the front text in Jordan's name we can see how dull and fuzzy it is.   If you looked at this under a loupe, you wouldn't see the consistent bold print in text that we do on the original.

We can also see a similar lack of quality in print on the back of the card:

A fake 87 Fleer Jordan, note the low quality of the print where the text is on the top of the card.

Let's again compare this to the original card.  Unfortunately, the picture quality on the fake card is poor, but one of the biggest tells is a lack of quality print in the text area.  Under a loupe, the fake card text will look extremely fuzzy- whereas on a real card, you will be sharp, bold print with well defined borders.

Another back of a real 1987 Fleer Jordan

Here's the back of a sloppy fake, look at the top in the blue where it seems like they tried to recreate the faded ink, but the red at the bottom of the card is way too dark.  It's hard to see too, but the print is really sloppy. 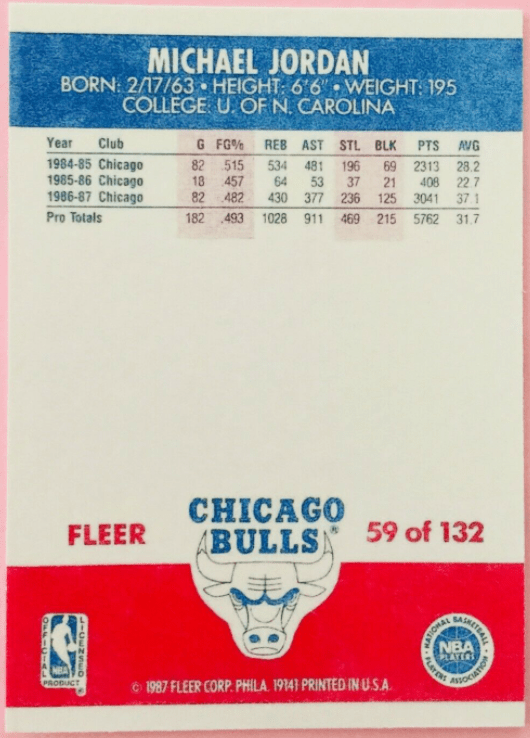 This is where a loupe becomes your best friend.

I have some reprints I ordered and will be posting some more closeups for comparison soon.  At the very least I wanted to start a discussion on this card, since I feel like there isn't much known about 87 Fleer Jordan reprints.

I am asking any fellow collectors with a known Jordan 87 Fleer reprint to please send it over to me at chris@allvintagecards.com.  Or feel free to leave a comment about any experience you've had with 87 Fleer Jordan fakes.

My fear is that with the price increases and the lack of knowledge surrounding 87 Fleer counterfeits, many collectors are going to get duped into buying fake cards.