With the unfortunate passing of baseball great Hank Aaron, there has been a lot of buying activity with his 1954 Topps rookie card.

There are some pretty good 1954 Topps Aaron fakes out there, so this counterfeit guide will help you avoid getting scammed.

Of course, like anything, even before you read this, make sure you check out our guides on ‘Buying Cards Safely on eBay‘ and our first piece dedicated to authenticating vintage cards.

As always, after reading if you have any questions on authenticating your Hank Aaron rookie card, please shoot me an email at chris@allvintagecards.com

The 1954 Topps baseball set is notorious for the bright colored backgrounds with the in action photo of the player in corner, along with a full size portrait image of the player.  The card has white borders on the left, right and bottom of the card. Note how the orange background extends to the top to the card. 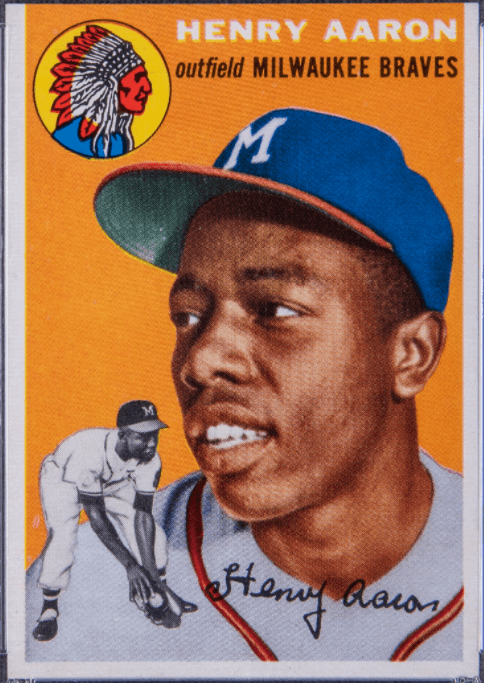 The first think you will notice on the text in 'Henry Aaron' are the two different colors--there is a white bold font and then a yellow shadow to the letters.  The print on 'outfield' and 'Milwaukee Braves' is a black bold text, with crisp clean lettering.

You can see the bold coloring of the text against the halftone printed background (more on that later).

Closeup of text on Aarons name

On a closeup of the 'Braves' logo we can see that the registration for the orange background slips a bit into the yellow circle and that the there are red overlaps/shadows in the headrest.

Notice the halftone printing used in the orange background and how it meets the solid black borders of the circle and solid yellows used for the logo. 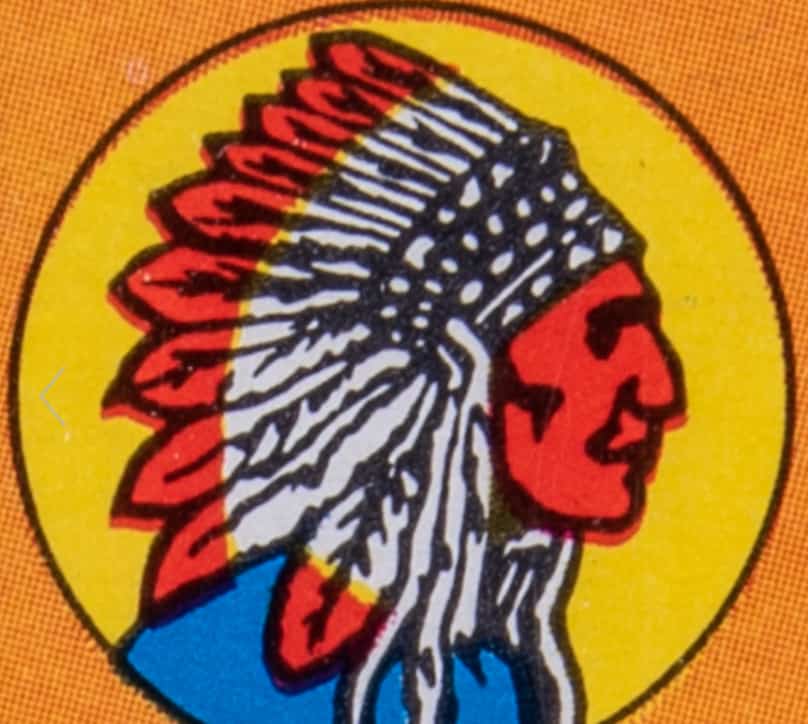 A closeup of the Braves logo on a real card

A closeup that shows the printing on a real Hank Aaron rookie card.

Here we have the back of an authentic 1954 Topps Hank Aaron rookie card.  Note the varying colors in text--green for the player biographical data (and team name), while black text is used for Aaron's  text biography.   This will be important to remember as we analyze some of the more popular counterfeit Aaron rookie cards. 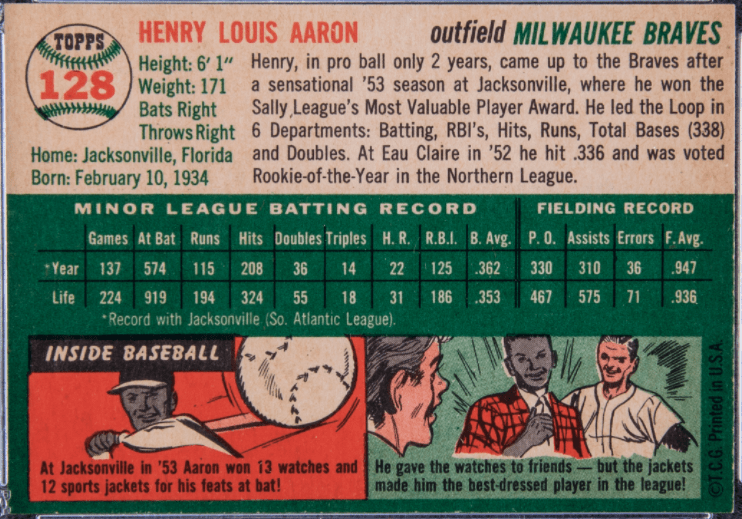 Closeup of back text on an authentic Aaron rookie card.

Here is one common counterfeit that can often be found on eBay. 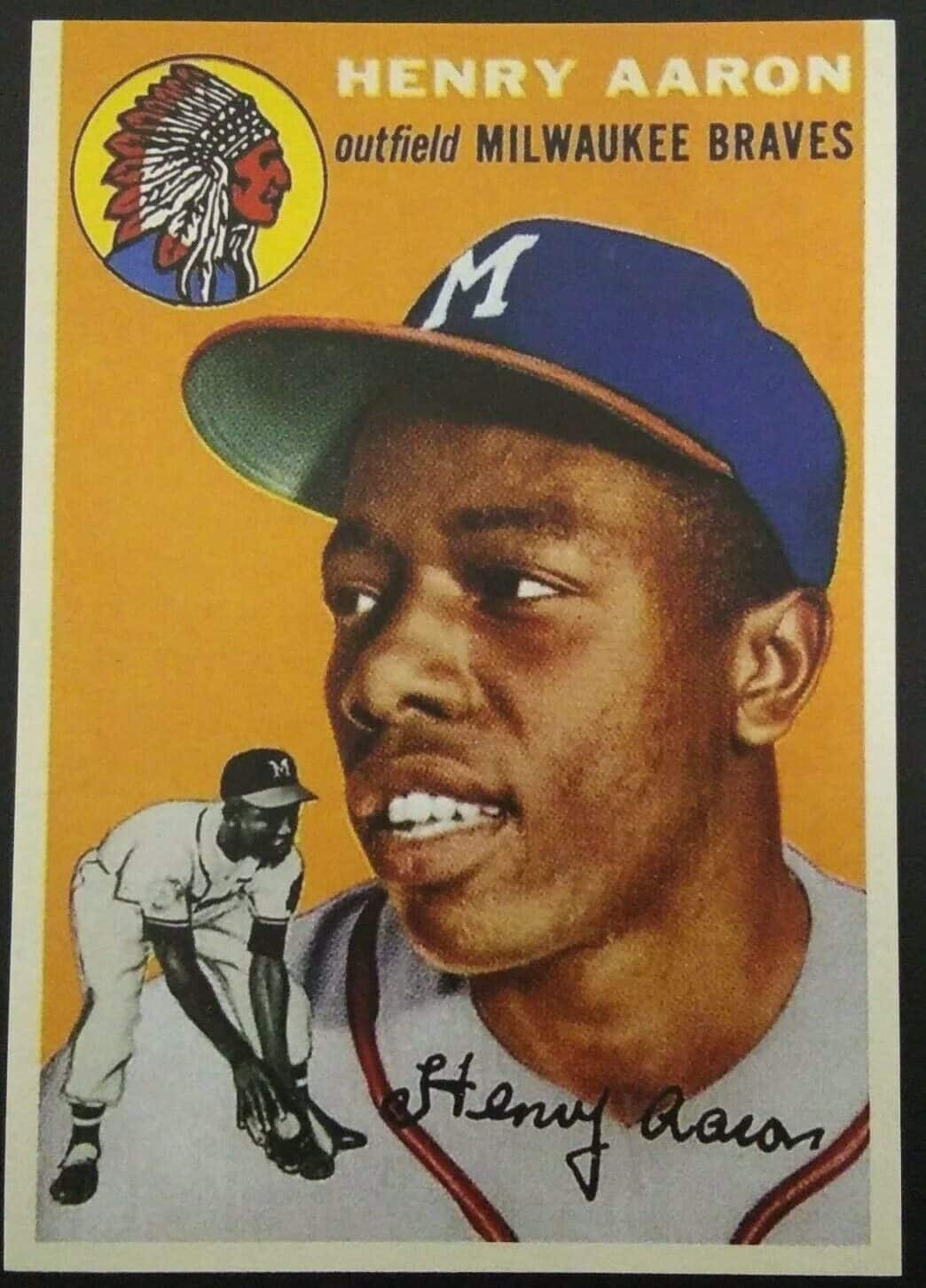 Here's a side by side of a real Aaron rookie card and the same fake card in question.

You can see variations in a key few areas.

1. The text 'Henry Aaron' and the Braves text.  Under loupe you will not see the same crispness and definition that I showed earlier with the real card.  You will also see differences in the halftone print of the background.

2. Notice the bright vibrant orange background and coloring on the real card, and then the drab dull orange and lack of crispness on the fake.

3.  Notice the variation in light between Aaron's face on the real card and the fake version---the counterfeit Aaron is just a lot darker.

4.  The action shot of Aaron fielding in the bottom left corner is also a lot darker on the fake card.

Let's get back to that action shot in the bottom left corner. 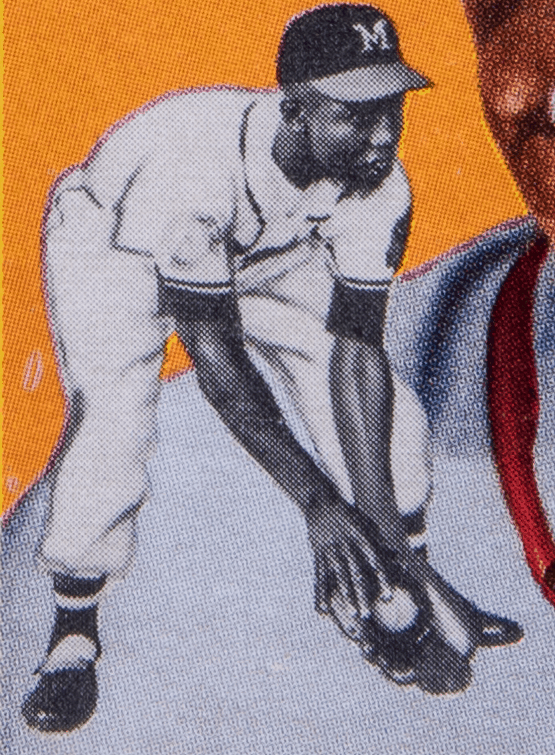 A real Aaron card--a closeup of the action photo of Aaron in the bottom left corner.

In a closeup you can see details of the halftone printing used on the card.  This was the printing technique used during the era---this print method is used on a majority of the front of the card, whereas solid inks are used in the logo and text areas that use only one color.

This is a great post from the Net54 forums that discusses some of the nuances of printing methods on the 1954 Topps set. 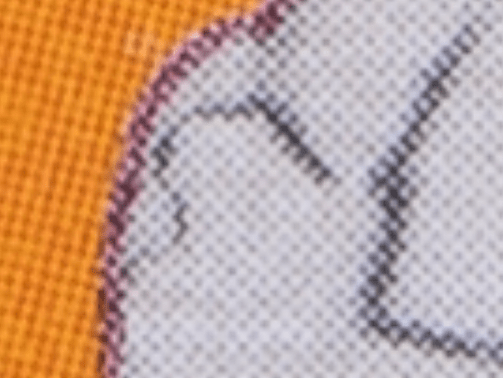 A closeup on the action photo on an authentic Aaron rookie card shows the half-tone printing method used to print the cards.

Here's the back of the same fake Aaron rookie card: 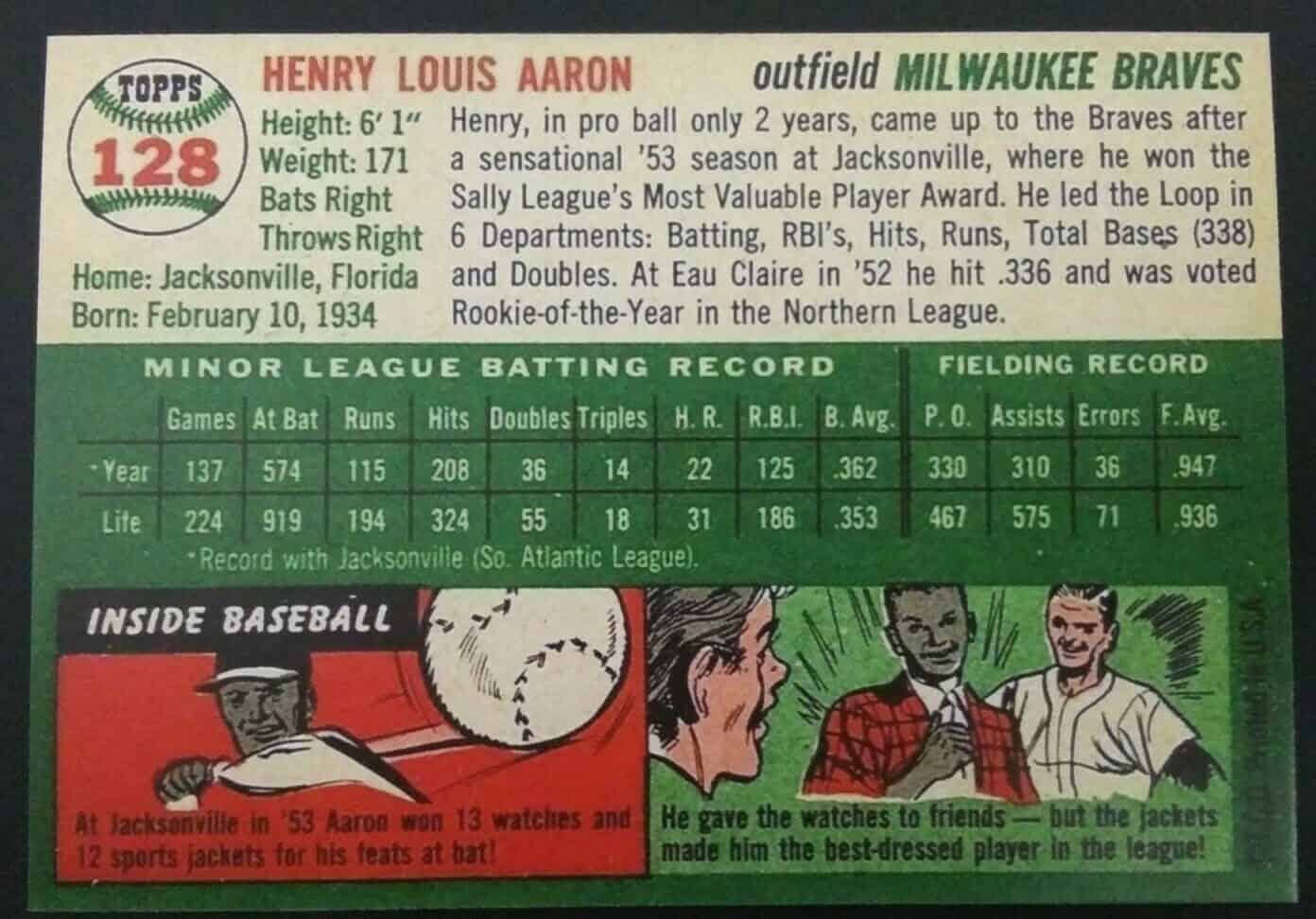 Back of one of the more common Aaron rookie counterfeits.

If we show the two cards together, there are a few things that are quite obvious if comparing the real card to the fake.

1. The background of the top of the card --where Aaron's bio is located--is much whiter/lighter than the real Aaron rookie card.

2. The bottom right box background on the fake has a darker, brighter hue of green on the fake card.  Also, the green background of the bottom 2/3 of the card is not as dark as on the real card.

Back of a real Hank Aaron rookie card.

Back of one of the more common Aaron rookie counterfeits.

Here's a foolproof way to figure this all out.

Number one, get yourself a loupe.  Here's one I have that only costs around $7. 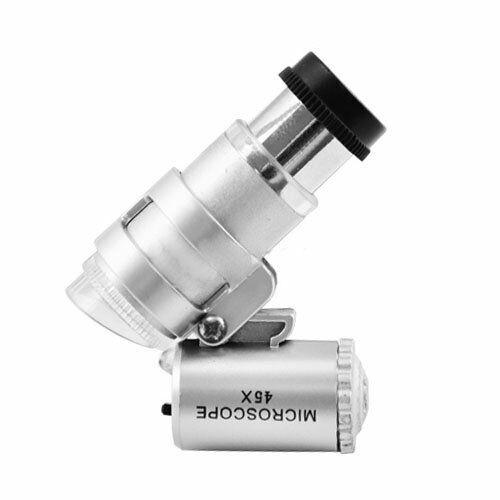 Number two---buy a common 1954 Topps Card.  I'm recommending the Bob Buhl 1954 Topps card which you can grab for less than $10, since it's the same team and same color as the Aaron rookie. 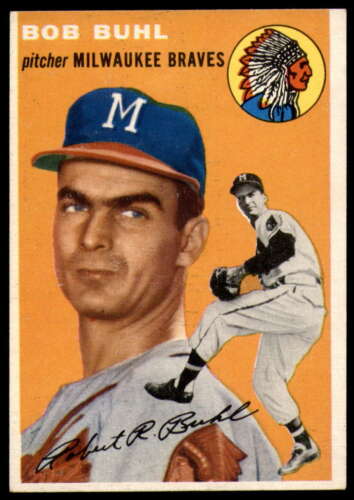 Number three--get to work.  Study the common card that you buy.  Look for some of the things I pointed out like the halftone printing and the other bold colors.  Look at the details of the shifts between the two.

Then you can examine the Aaron rookie card and see if you notice similar print details.  Of course this only works if you have the card in hand, but if you have a really high resolution photo, you might be able to examine on your computer.

Need any more help?  Shoot me an email at chris@allvintagecards.com