The last few years in the sports card market have been to say at the very least- a bit crazy.  Sports card grading has exploded, driven by a surge in values for both vintage and modern cards.

This surge can largely be explained by increased speculation and greed, fueled by the advent of card breaks, flippers, investors, and the like.

A global pandemic seemed to stoke the fire even further as bored, work from home collectors sought refuge in the hobby.  Stimulus checks seemed to keep it all afloat, although as the economy has started to reopen, there do appear to be some kinks in the armor.

Through it all, the card grading companies have been beyond overwhelmed—PSA in an April letter to its followers, said that it had received more submissions in three days than it had in the previous three months.   Even SGC had said that over the course of a 24 hour span, the number of cards submitted to SGC for grading increased by over 500%.

The deluge of grading requests forced PSA to halt all submissions below its Super Express ($300) grading level effectively putting a pause button on things to help its graders get caught up.   Along the way, PSA also hiked prices for all of its grading services, thus, once operations resume (expected in July) it will cost collectors $50 to grade a card (unless it is submitted in a bulk value or grading special submission).

And yes, there are other grading companies, however, the facts are that PSA graded cards carry a premium over their counterparts.

So, what does all of this mean for the hobby?  First, the PSA grading pause does appear to have coincided with a rather abrupt pullback in card values.  While some of it appears to be a bit of a breather, given the massive rise in card prices, there is likely a sort of hobby-wide reset in expectations happening right now.

If you can't submit a card to your desired grader of choice, then what?  Do you choose Beckett or SGC, knowing that you might not get the same sort of return on your investment?

I think many are just sort of waiting to see what happens.  If PSA does indeed open up its grading services in July, then why not wait a few months.   Some have accepted the fact that Beckett and SGC are indeed good enough, and are at the least, an option to consider.  But the facts are facts.

Here are the recent comps for PSA, Beckett and SGC graded 1986 Fleer Michael Jordan Rookie cards over the past month.

The Jordan rookie is a bit of a unique case as there are a lot of PSA 1986 Fleer set builders, but still---a PSA graded Jordan rookie on average carries a rough 28% premium versus a comparative card graded from either SGC or BGS. 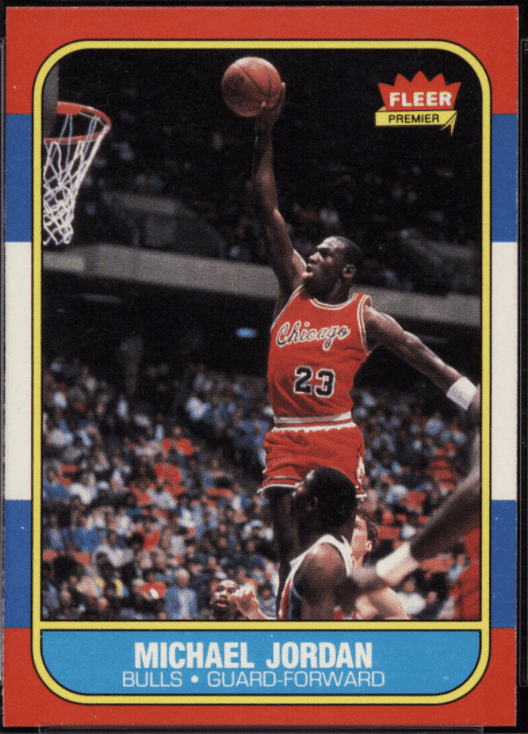 So, if you know in the end, that you can get a 28% premium mark up on your card, just based on the grader you choose, wouldn't you opt for the one that's going to get you a better return--assuming all grading costs are equal.

And well that last part is the big wild card.  That Jordan rookie now, and pre-PSA grading shut down would cost you $300 to grade at the 'Super Express' level which carries a declared value of $4999 (we will assume for a moment that we didn't think we were getting a 7 when we sent it in to PSA

Note that the same Jordan will cost you $250 at SGC and a little over $200 at Beckett.  So it certainly could be worth the wait to just wait out the backlog at PSA.

But then what?  So, July comes along and opens everything up again--are we just going to be back in the situation shortly thereafter again?   Well, considering that PSA's base level is now $50, it should help slow down things a bit--although they will still have to contend with the onslaught of value and bulk level submissions.

Given that SGC's lowest price to grade is now $75 it certainly appears that the grading companies are collectively trying to stamp out the low value submissions that have been a big part of the problem.  If it takes $50-$75 to grade a card, you probably won't have any more 1986 Topps baseball commons sent in. 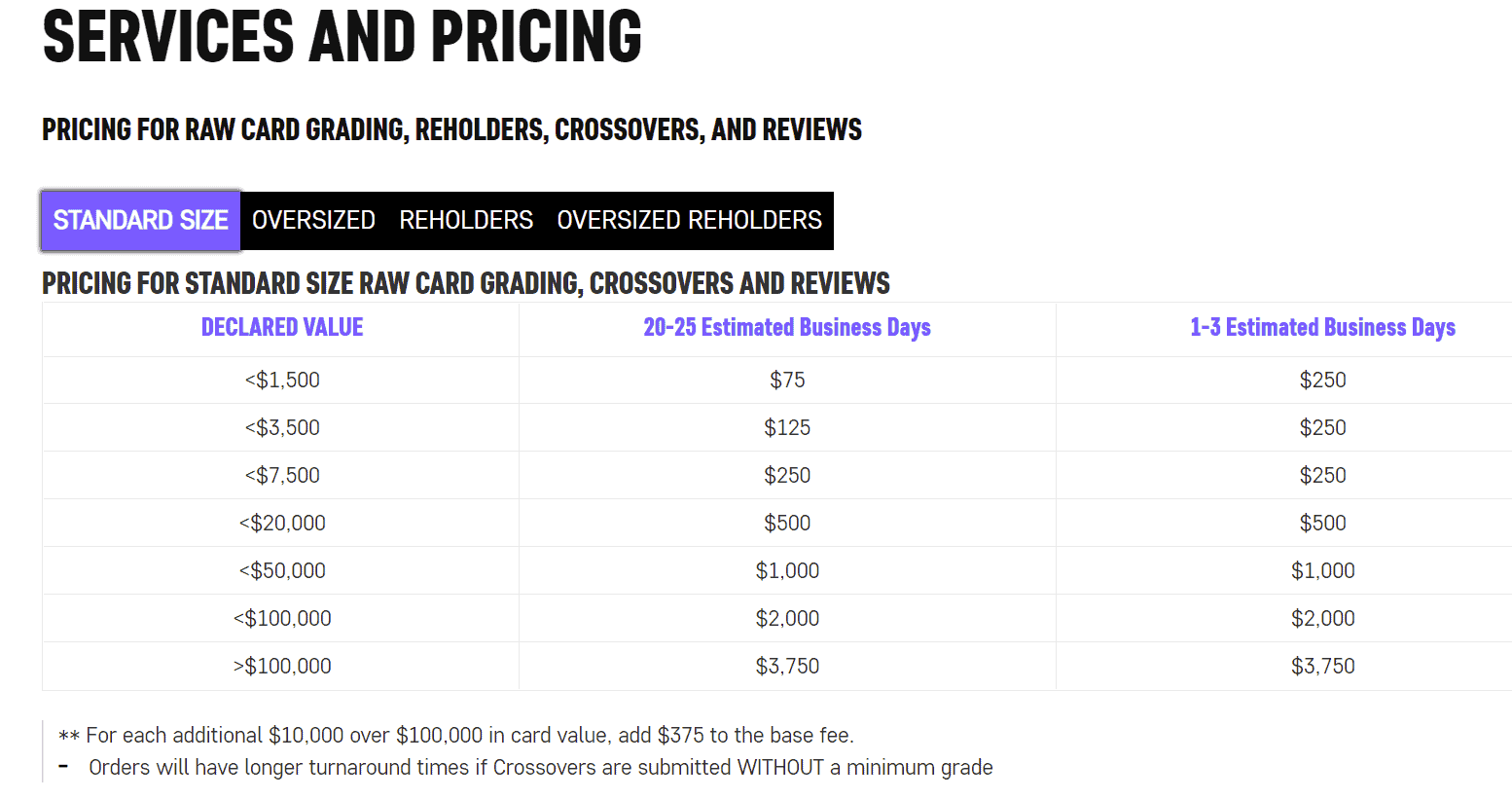 SGC says it can get you your cards back in 20-25 business days at its Standard level, whereas you'll need to send cards in via Premium or Express at Beckett to get that same level of promise--note that Beckett's economy submissions are taking close to a year right now.

So, ultimately that could lead to inflated prices on lower valued cards, where it now becomes economically infeasible to grade any card that is worth less than $100. But, I don't see pack breakers or card groups or flippers changing their business models anytime soon, so the odds are that not much will really change.

PSA has been out in the open that they are making changes---from adding additional square footage to their California offices, to hiring new graders. Additionally they are expanding their presence to new locations both in the US and Internationally.  The latest news being that they had acquired Genamint, a software company that helps provide automated card grades.  Thus, it certainly appears, that are preparing to come out of this stoppage with more resources to help meet the expected demand.

So, at least from the standpoint of PSA, they do appear to making some operational changes.  I haven't heard much from SGC or Beckett aside from maybe hiring more graders, so it remains to be seen if they will be able to keep up with the PSA overflow.

There are new grading companies--maybe most notably CSG (Certified Sports Guaranty), which was launched by former professional graders and is backed by the same ownership and senior management team behind NGC, PMG and CGC — the world’s leading and largest coin, paper money and comic book certification services.

I think they probably have the most promise, although their slabs are horrendously ugly and it appears that most feel the same as I do.  I'm not sure many will pay the same sort of respect to this company until something is done about that label. 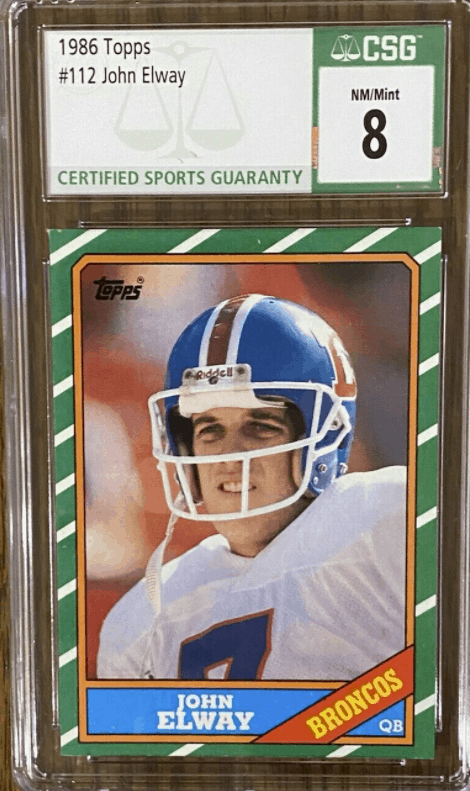 Hybrid Grading Approach (HGA) appears to be popular among some modern collectors as they have taken a tiered approach to submissions so that they don't get too overwhelmed.  Unfortunately, their labels might be worse than CSG's, due to the fact that you can actually customize the colors on the label.  This leads to a complete lack of consistency in appearance, which, in my mind is one of the keys to success for any grading company.  Hence the reason PSA has been as successful as it has for so long. 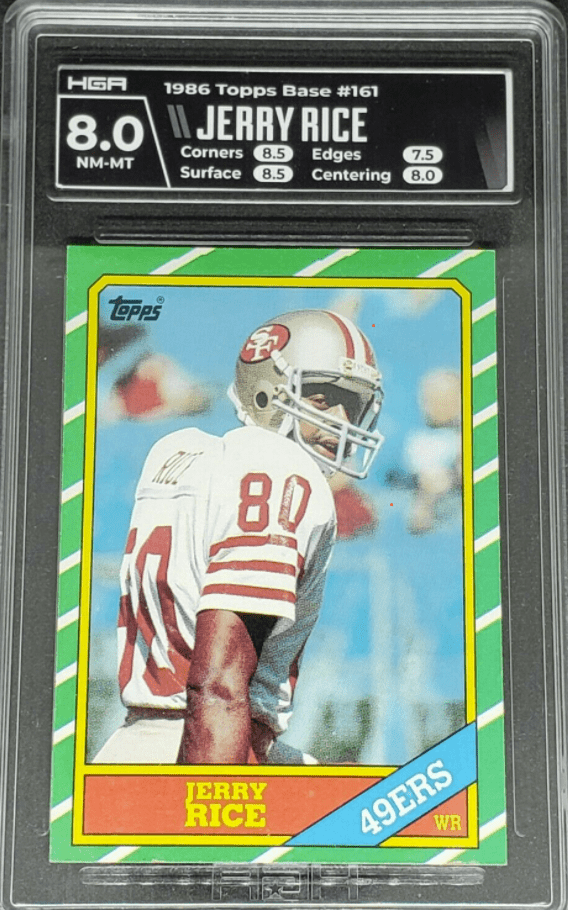 The future remains quite unclear, but I think we can be certain that card grading will remain a huge part of the hobby in coming years.

PSA remains the leader, and despite the current pause in its operations, I can't envision any other company taking the lead.  Creating a new card grading company from scratch is a near impossible feat in this market, and while HGA and CSG are trying, I don't believe they will have much of an impact on the hobby over time.

SGC and Beckett Grading have been able to keep operations fairly tight and have apparently handled the overflow from PSA, although I would expect that collectors switching temporarily would revert to PSA once operations normalize.

For collectors looking to grade cards, I would recommend weighing the costs to grade the card, along with the turnaround times and how that fits in with your expectations as to when you need to have the card back in your hands.

Examine pricing on eBay to assess the sales prices between PSA, SGC and BGS graded cards.  In the end, if its worth less than $500, it probably doesn't make much sense to get the card graded, unless you are interested in slabbing the card for your personal collection.