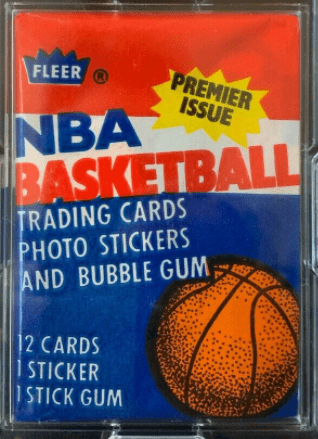 I’ve covered the Jordan rookie card quite extensively, both from an authenticity standpoint (here, here and here) along with the investment side of investing in the card (here and here).

We’ve spoken about unopened vintage wax packs on the blog, but I have recently become slightly obsessed with vintage basketball packs.  Knowing that a 30+ year old pack that once sold for no more than 50 cents could hold a treasure worth in the multiple thousands is fascinating, to say the least.

I was buying ’86 fleer packs as a kid, and never did I realize that I should have had my parents mortgaging their house to buy every single 1986 Fleer case in existence to hold for 35 years.

I purchased a couple of unopened 86 Fleer packs a few years back on eBay before I became more knowledgeable on packs, and know I likely bought some resealed packs.   I’ve also been a part of a few 1986 Fleer pack breaks, one of which a Jordan rookie card was pulled (not my spot, unfortunately).

When I learned about the 1986 Fleer sequence, I became slightly obsessed with the topic, wondering if a) it might be possible to identify what packs actually hold a Jordan rookie card and b) if those packs could still be found available for sale at a discount.

Thus, this post will discuss 1986 Fleer packs in detail–both the numerical sequencing and the investment case for unopened 1986 Fleer basketball wax packs.

There are 132 cards in the '86 Fleer set, with an additional 11 stickers.  We've provide the full checklist for reference along with a printable checklist.  You might notice that the set  is ordered alphabetically by the player's last name.

1986 Fleer wax boxes were issued with 36 packs, with each pack containing 12 regular cards and one sticker.  Thus each box contains 432 cards, and 36 stickers. Given the small size of the base set (132 cards) the odds of finding a Jordan in a pack are reasonably good.  On average, an unopened box should yield between three to four Jordan #57 rookie cards, and on average three Michael Jordan #8 stickers. 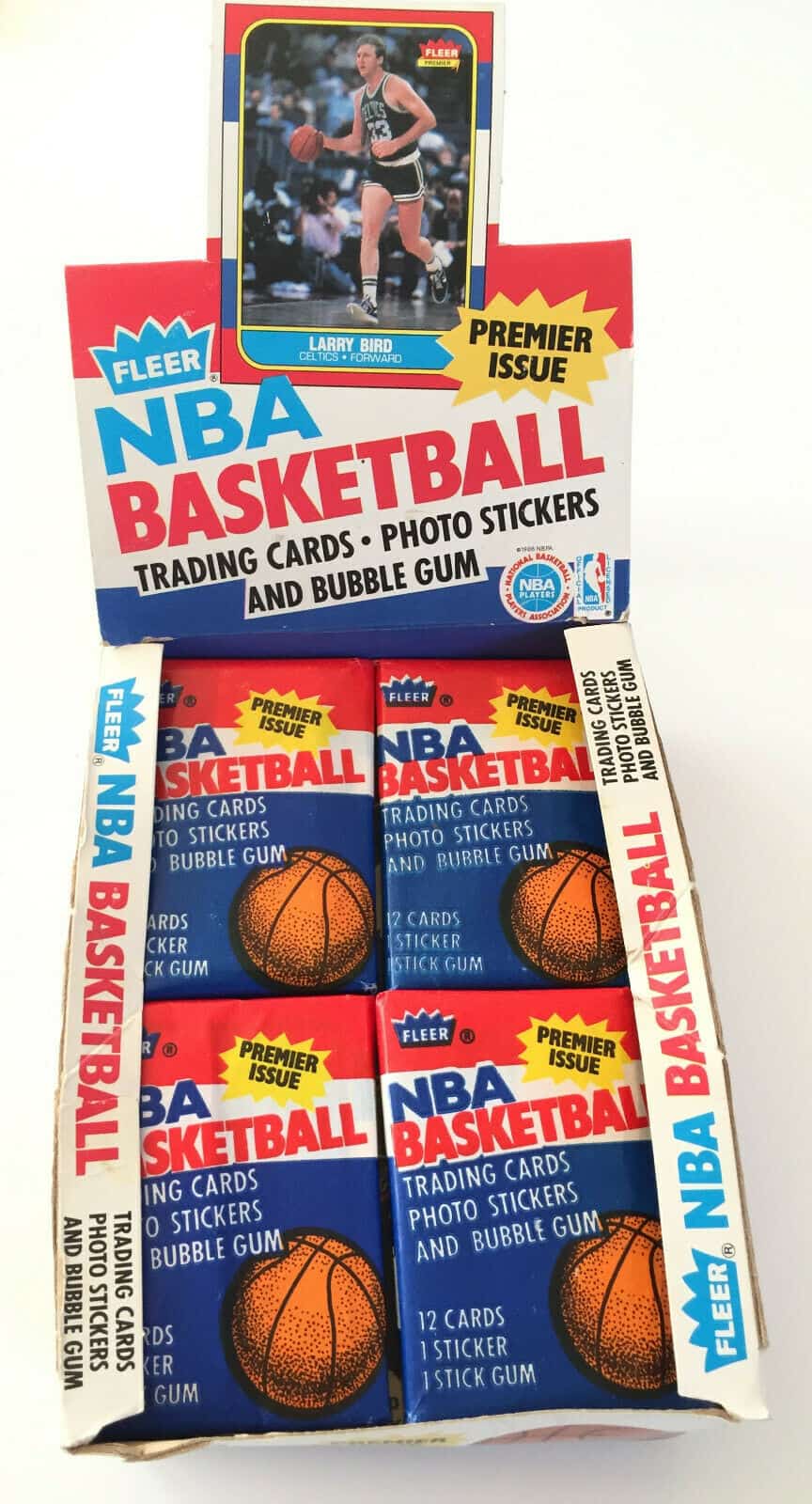 This predictability in collation has led to some that believe unopened single packs shouldn't be purchased unless from an unopened/unsearched box, due to the fact that some box owners might open packs, secure the 3-4 Jordan's and send off the rest to get graded, knowing that the remaining packs have a lower probability of success.

Examining The Sequence In A 1986 Fleer Pack

First, let's examine an uncut sheet of 1986 Fleer Basketball.  This particular sheet starts with a Jeff Malone #67, with the succeeding cards running through the set numerically in order. 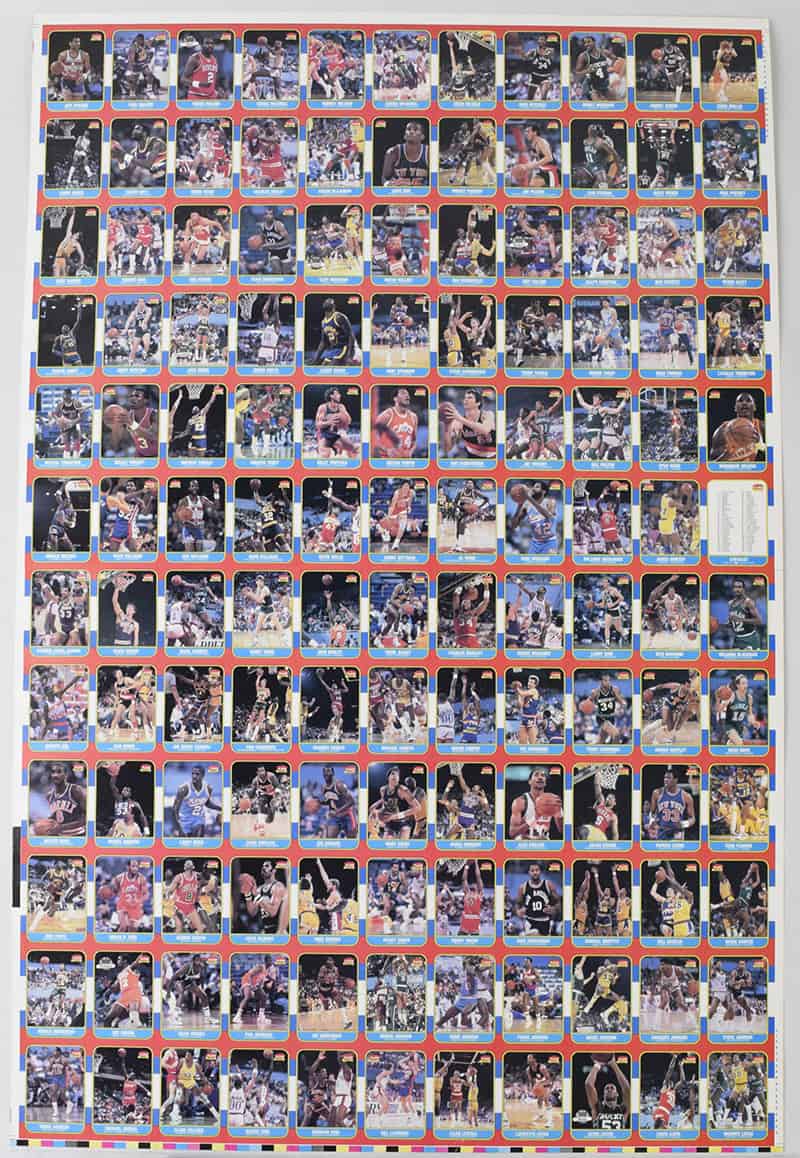 Packs of '86 Fleer Basketball have two distinct parallel sequences, with the separation between the two sequences measuring 66 cards.  Cards in the pack move in a descending order, however can be random changes in the sequence.

we know the next card will be a difference of 66 cards, or card #44

Note that the sticker is completely random and not tied to the collation of the base cards in the pack.

I've actually been sort of obsessed with the sequence in '86 Fleer packs and YouTube provides no shortage of evidence to examine the cards.

Here's an unopened box break from Vintage Breaks; let's examine the sequence of the cards.

In pack #1 we can see that the sequence randomly flipped after the first two cards and then followed the normal parallel sequence.

Here's a look at the second pack:

Do you see the pattern?  Moving perfectly along with two parallel sequences, measured by a difference of 66 cards, moving in descending order.

Nope!  Check out how that next card shown is upside down--this is where the sequence has randomly flipped.  Thus, it is never a guarantee that each card in the pack will follow the same exact pattern throughout.

So next card is #46 - Roy Hinson; we can now predict precisely what the next card will be---as we know it will be a 66 card difference....Or none other than Sedale Threatt..right? Yep. 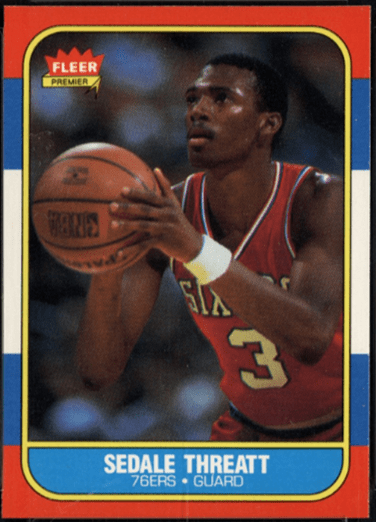 Moving On To Pack Three:

No Jordan Yet!  And note that Darren Rovell was hoping for a Jordan but absent a very lucky random sequence change the numbers weren't showing that a Jordan was likely in that pack early on.

#55 - Steve Jordan---ok well, this must be a very nice sequence change...  There are five cards left in the pack and since MJ is #57, this has to be a good thing right?

Nope, don't forget that we move descending from here.  we would have been much happier seeing a #59 Albert King or #58 Clark Kellogg

Wow, half a box down and no Jordan's.  Let's go to the next pack" 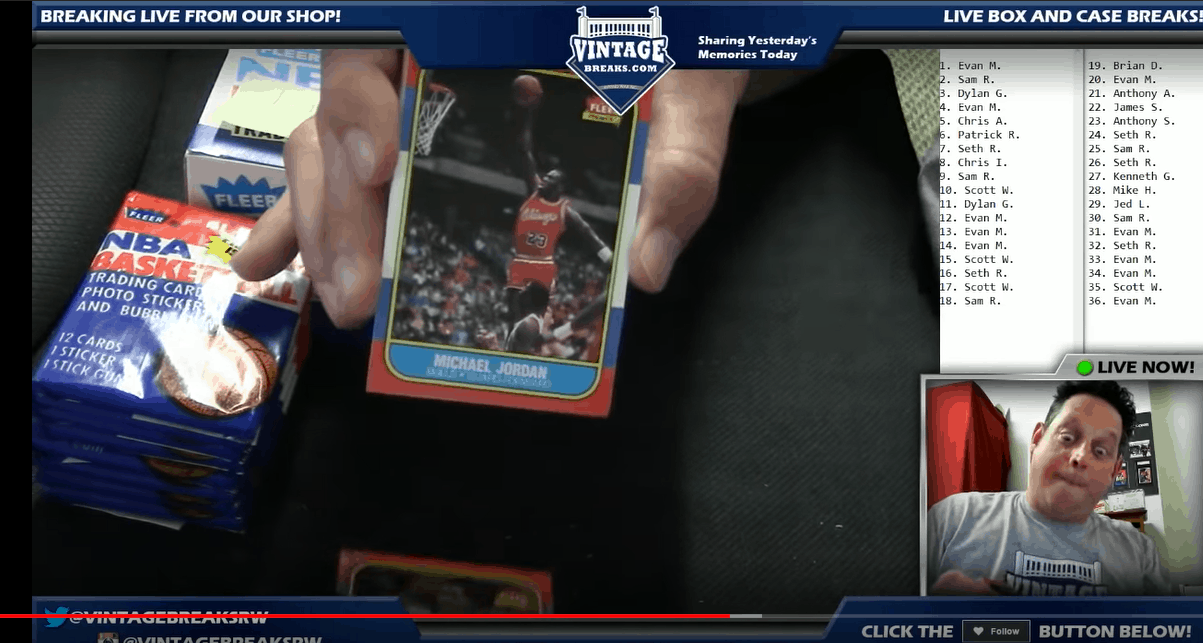 They ended up pulling three Jordan's from the box.  Here's the other links and sequences:

they act so surprised, but have to assume they knew it was coming,:

I think by now, you should have a good idea on how this whole sequencing thing works with 1986 Fleer basketball packs.

Can You Tell If A Pack Holds A Jordan Rookie?

Let's remember that the sticker on the back of the pack is completely random, thus the sticker will not tell us anything about the base cards in the pack.

This is why buying unopened 86 Fleer packs can certainly be a crap shoot, especially if they haven't been graded.  Even if they are graded, it is entirely possible that the seller examined the front of the pack before grading.

But remember, just because a front card doesn't match up with a sequence to a Jordan rookie, doesn't mean that it might not change sequences randomly in the pack.  This is why front card identification, while very helpful in trying to predict sequence, is not always fool proof.

So, first of all, I would be very skeptical about buying any unopened 1986 Fleer packs on eBay that haven't been graded.  This is of course, unless you are buying from a highly respected seller and if the pack looks like is has not been tampered with.  Even then I might try to get a peek at the front and back (sticker) cards.

The only current grader for individual wax packs is PSA, although GAI used to grade wax packs and ultimately they were fairly reputable in the early days, so typically I would feel somewhat confident in buying GAI graded packs.

However, I would also examine packs to look for any tears on the corners of the packs or any suspicious folding with the pack itself.  Here are red flags we outlined in a previous article:

Other Great Resources on 1986 fleer Packs and Collation