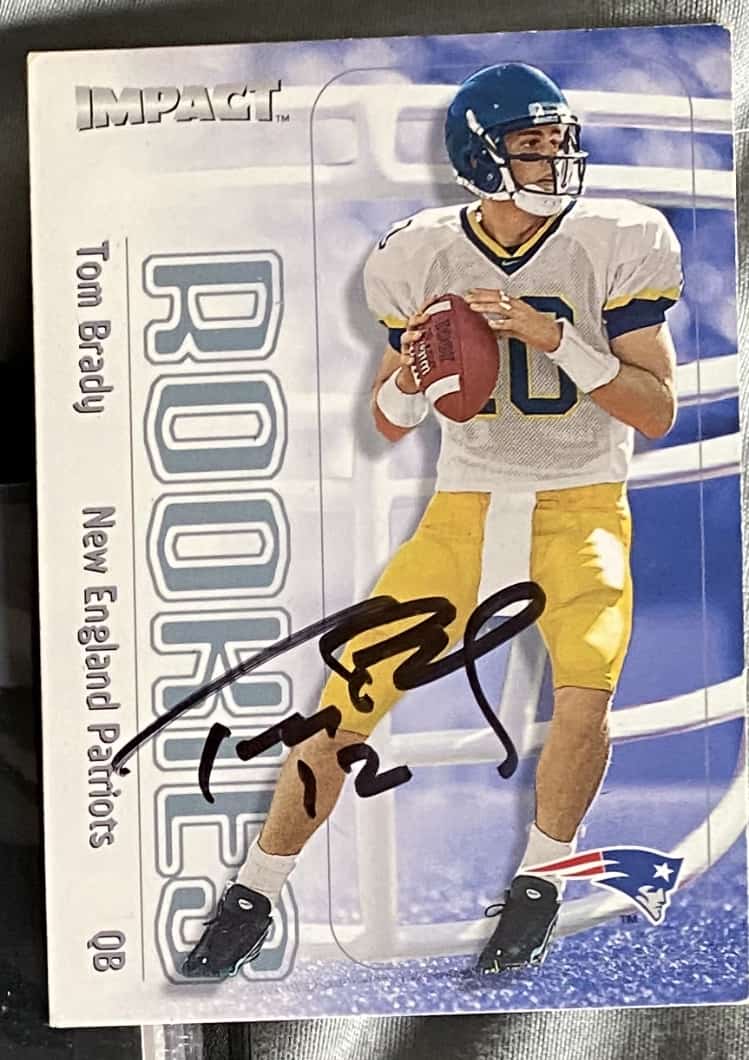 Read More
How To Spot A Fake Tom Brady Autograph

The 1951 Bowman Mickey Mantle card is one of the most iconic vintage baseball cards in the hobby.

Oftentimes, the 1952 Topps Mantle or Mantle’s second year 1953 Topps card get all the attention but the 1951 Bowman Mantle is still his true rookie card.

Of course, as prices go higher, the more we need to worry about fakes.  And there are no shortage of 51 Bowman Mantle fakes.

This guide should give you all the information you need to avoid getting scammed on a fake 1951 Bowman Mickey Mantle cad.

As always, if you spot a suspect card and need some help or if you’re trying to sell an authentic 51 Bowman Mantle, feel free to shoot us a line at help@allvintagecards.com 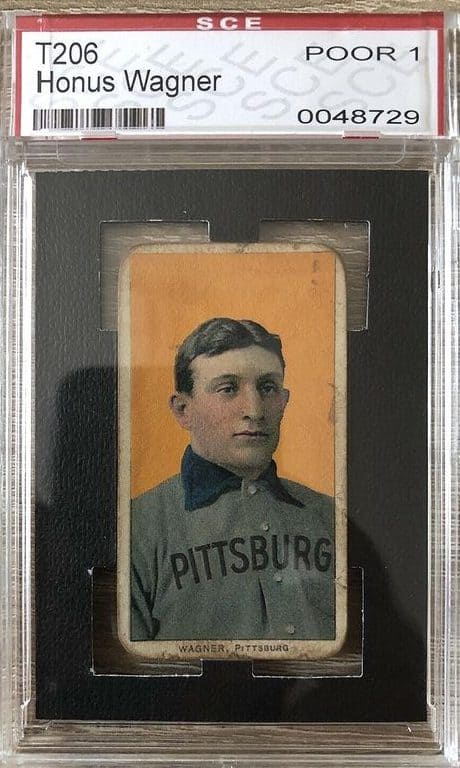 While the majority of present-day card scams relate to more modern era cards that are easier to reproduce, there are most certainly counterfeit cards dating back to the Pre-War era.

We have covered the evaluation of old counterfeit cards before, yet this piece will focus on detecting some of the more common fakes from the infamous T206 White Borders set.

Hopefully, this guide will arm you with all of the knowledge you need in order to avoid buying any fake T206 cards.

As always if you come across a good fake or if you need any help in authenticating a T206 card, shoot us an email at help@allvintagecards.com 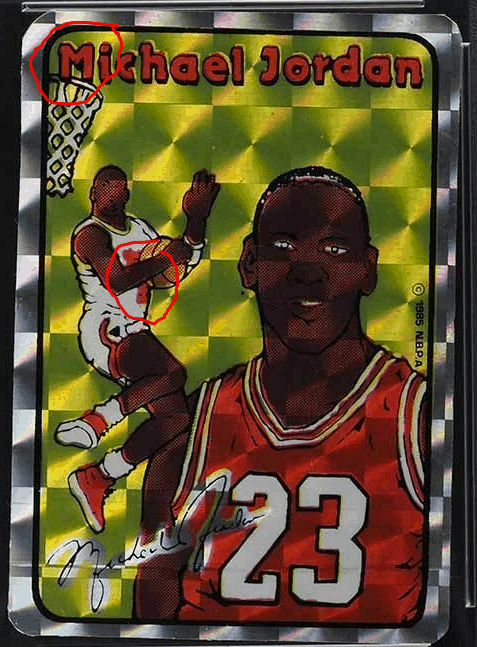 I’ll be honest, I wasn’t even aware of this card a year ago, but I wish I was, as the 1985 Prism Jewel Michael Jordan Sticker has skyrocketed in value.

Recent sales of PSA 8 graded copies of the card have reached nearly $50,000.

The cards were inserted into vending machines, likely mostly outside of your local grocery store.   And given that they are stickers, most kids that plopped the quarters into the machine to grab these were peeling them off to use them how a kid might actually use a sticker.

Hence, they are super rare to find intact and in good condition.  PSA has graded only 87 copies of the card, with only 8 reaching a PSA 9 and only 1 garnering a PSA 10 Gem Mint.

I started to become more curious about the card when I started to get inquires from people that had one (or two) that they were trying to sell.  Knowing how rare these are, to receive multiple inquiries on this issue, just seemed sort of strange to me. 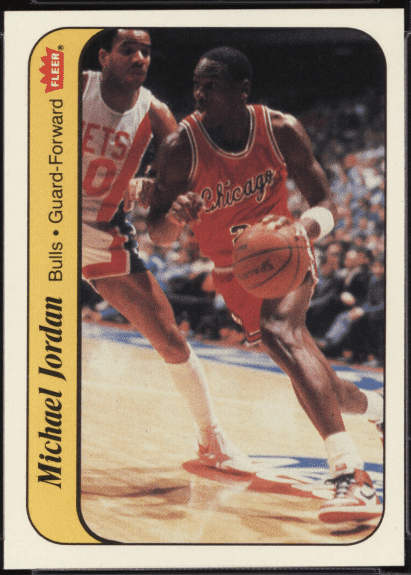 Michael Jordan’s Fleer Rookie card has been on a mind-bending, stratospheric price increase over the past few years.  A PSA 10 Jordan rookie card just sold for over $200K back in December of last year.

Like anything else with dollars behind it, the scammers have come out in full force trying to peddle fakes for thousands of dollars to unwitting buyers.  We’ve tried our best to educate collectors (here, here and here), but I keep hearing about swindles all the time.

While Jordan’s #57 Fleer rookie card has seen a monstrous rise in price, his sticker from the same set (#8 of 11) has also garnered a ton of collector demand, driving up its price by XX over the past year on average.

While scammers have focused on Jordan’s base card from the Fleer set, there are definitely fake Jordan sticker cards in circulation.

PS – If this guide or any of other articles have helped you in getting scammed, please let us know in the comments below.

In addition, we could always use more reviews — you can leave us a review on Google here: Leave A Review For All Vintage Cards

Read More
How To Spot A Fake Bird/Magic Rookie Card

The Complete Guide To Safely Buying Sports Cards on eBay 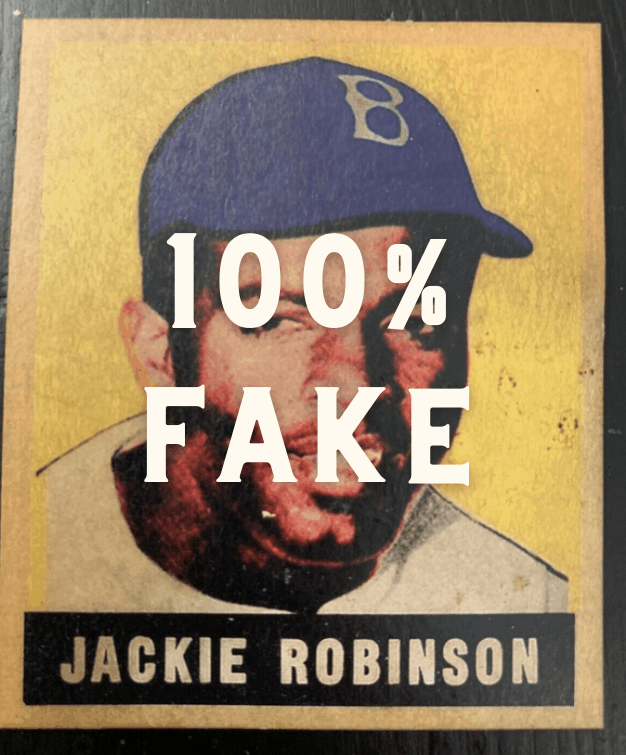 I’ve had the unfortunate experience of breaking the news to many eBay buyers that the card they spent many thousands of dollars on was fake.

Thankfully eBay has strong buyer protection rules in place along with PayPal guarantees.

They also offer options to dispute the transaction through your credit card company.

Thus, many of the buyers I’ve spoken to have been able to recover their funds.

Still, I hope that eBay can develop a program for sports cards, similar to what they have done with sneakers and watches.

Despite this, I decided to create this guide to help buyers protect themselves from the most unscrupulous of eBay sellers.

eBay does a good job of shutting down fake listings if enough people complain, but oftentimes many fall through the cracks.

Note that eBay does require that any cards that have a questionable authenticity be listed as a reprint.

Yet, buyers are still bidding up these cards thinking they’ve found a diamond in the rough.

This guide to safely buying sports cards on eBay will help you avoid these mistakes.

And hopefully, help you become a better-informed buyer.

How To Spot A Fake 1933 Goudey Ruth Or Gehrig Card 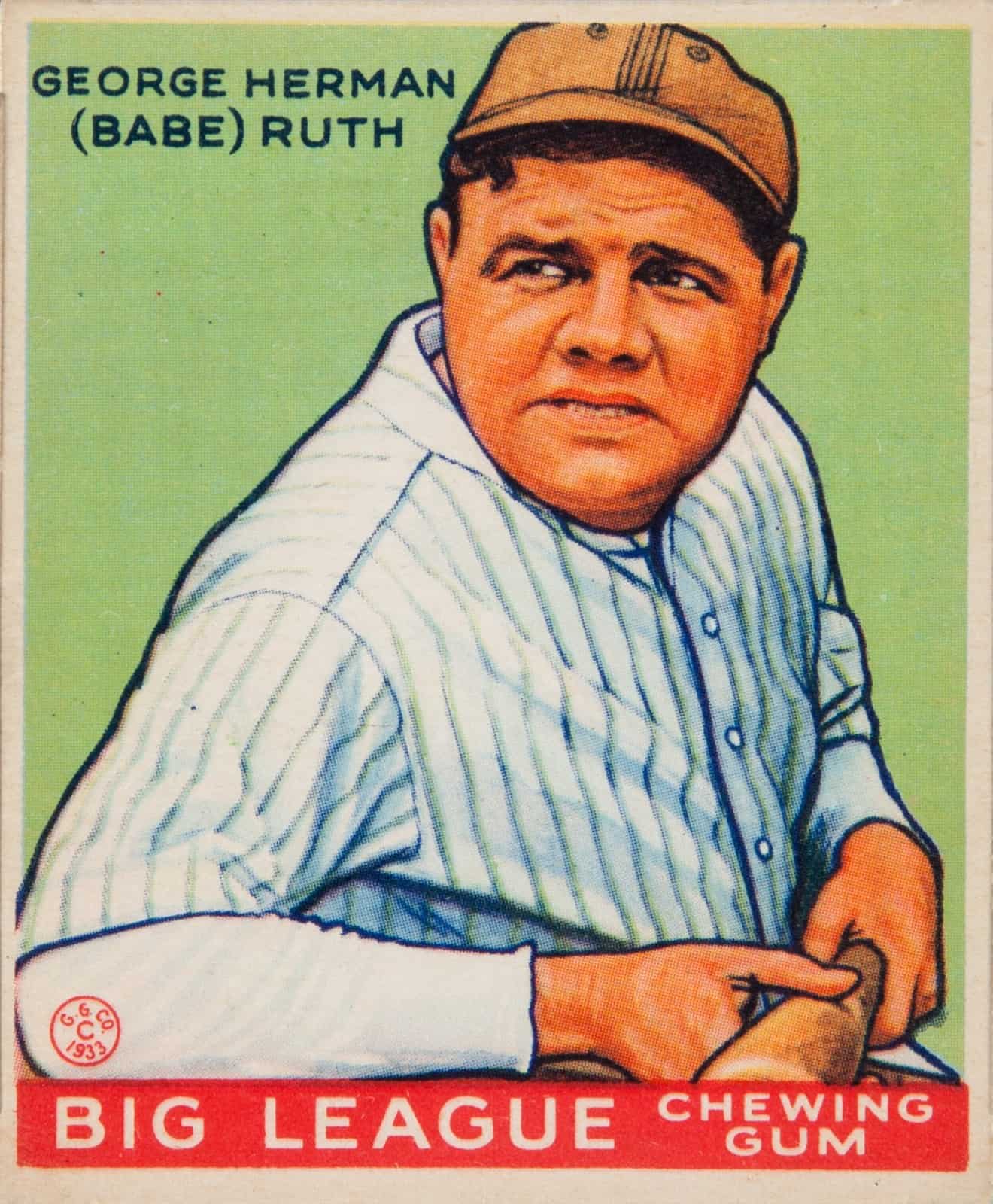 The 1933 Goudey Babe Ruth cards have been on absolute fire of late, with the Lou Gehrig cards (there are two) from the same set not too far behind.

I often get inspiration for new counterfeit resource guides from the questions coming in to me.  And I’ve had a lot of requests for help of late in authenticating Goudey Ruth cards, with many of them ending up being outright fakes.

So, in yet another attempt to help fellow collectors avoid getting scammed, this guide is all you need to know in distinguishing a fake Goudey Ruth or Gehrig from the real deal.   To note, the Goudeys can be among the toughest to distinguish in the hobby due to some better than average reprints.

Also, one quick point too.  I’m not going to get every authentication question right.  Especially when dealing with only photos.  Sometimes, just the wrong angle or the wrong light can make a card look questionable from a photo.  So, all of this to say, buy a loupe and read this article!

And…one last thing I need to get off my chest.  Often times the game of authentication (especially when not done in person) is a game of weighing the red flags.  For example, if a raw card is selling for only a small discount versus a graded copy, and there is even one small concern, forget about it.  Why take the risk?  And if you are dealing with the same question from a seller on eBay with questionable feedback…move on!

Of course, once again, if you have any questions on a Goudey Ruth or Gehrig you might have, feel free to email me at chris@allvintagecards.com.