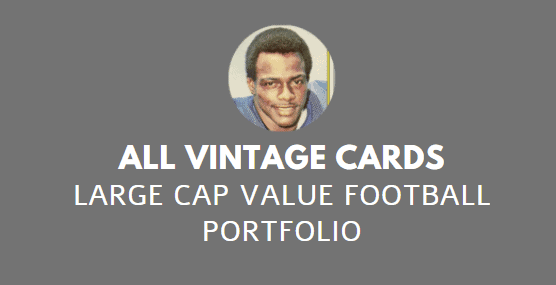 The All Vintage Cards Large Cap Football Portfolio is a collection of ten higher-priced vintage football cards that we think have good long-term investment potential.

For those not familiar with the lexicon, this corresponds to mutual fund portfolios in the investment world.  Large-Cap within the investment space equates to a portfolio of the equity market’s largest companies.

For this All Vintage Cards Large Cap Value Football Portfolio we have selected ten cards, each with a value of $3000 or more. 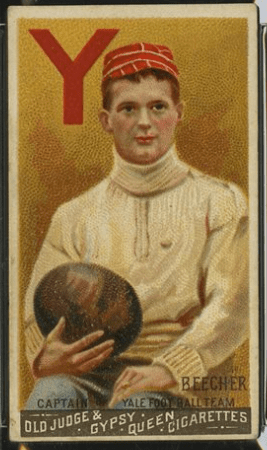 Why We Selected It For The Portfolio:  Many football fans might not be familiar with Harry Beecher.  Beecher was the captain of the undefeated Yale Bulldogs of 1887, while rushing for 66 touchdowns in three years of college football.   His 1888 Goodwin Champions card is the only football card in the set and the first officially released football card in history.   Thus, the card is one of the more important card issues in the hobby.

Current PSA Population: Given the prominence of the card in the hobby and its relative scarcity (PSA has graded only 52 copies) it's not a cheap card and for some maybe out of reach.  However, for this Large Cap football portfolio, I see it as the perfect fit---a good copy is likely to run close to $5K. 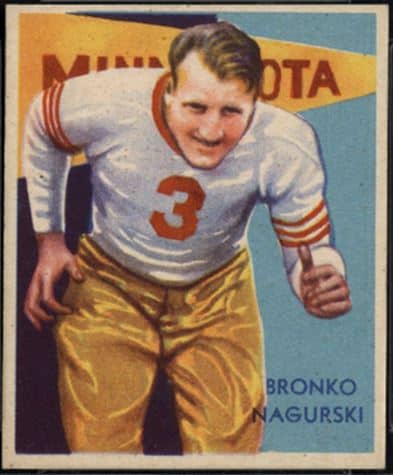 Why We Selected It For The Portfolio:  The 1935 Bronko Nagurski card is truly one of the most iconic football cards and the most valuable football card of all time.  The appeal to Nagurski was not only due to his size and his prowess in football but also for the fact that he was a dual-sport athlete, even leaving football in 1937 to become a full-time professional wrestler.

Current PSA Population:  PSA has graded less than 200 Nagurski rookie cards, adding to the high value of the card.  I would consider the Nagurski on part with other iconic vintage cards such as the 1952 Topps Mickey Mantle or 1957 Topps Bill Russell rookie card. 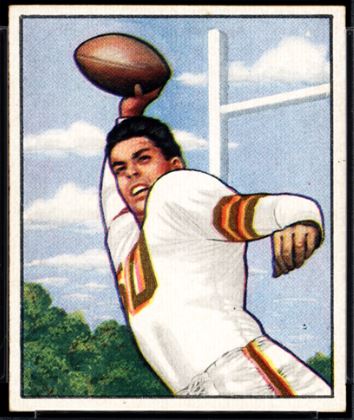 Why We Selected It For The Portfolio:  ‘Automatic’ Otto was a legend behind Center, and one of the most successful quarterbacks to ever play the game.  In his 10 years as quarterback of the Cleveland Browns, he led his team to the Championship in every single year.  Graham’s 1950 Bowman rookie card is a striking piece of artwork with Graham looking ready to do what he did best.  Vintage football collectors hold the Graham rookie as one of the hobby’s most desired cards.

Current PSA Population:  The card isn’t necessarily scarce (PSA has graded over 600 copies) although Mint condition copies are tough to find (only 9 have been graded a PSA 9 or Mint condition).  We've chosen the NM-MT copy for our portfolio, but if you want to buy a Graham rookie, hunt for a lower graded copy for under $400. 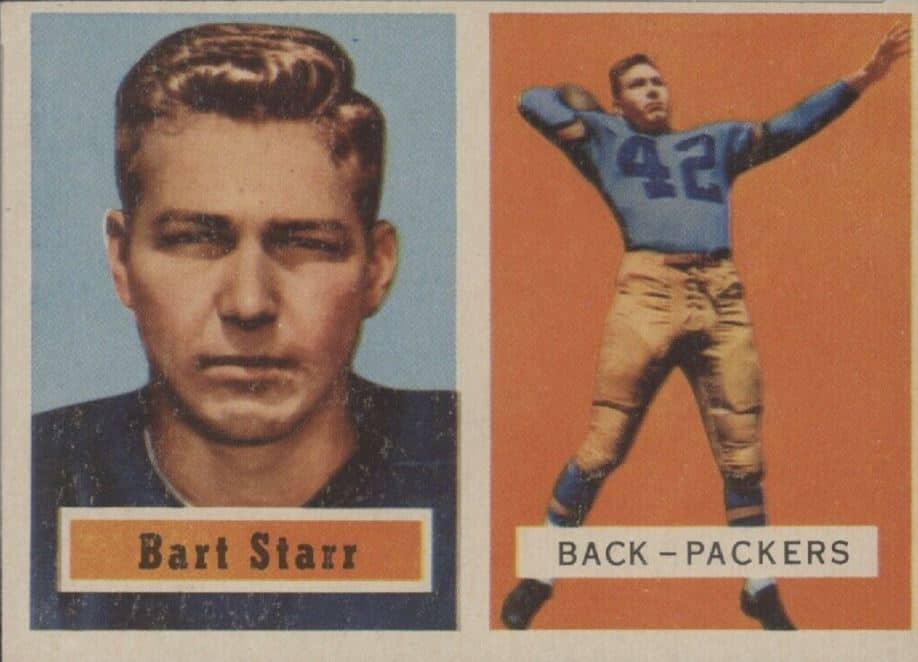 Why We Selected It For The Portfolio:  Bart Starr was one of the best quarterbacks of all time (#13th best according to NFL.com), leading the Packers to 5 NFL and 2 Super Bowl titles. The 1957 Topps football card set is considered to be one of the most landmark sets among vintage football cards.  And one of the keys to the set is Bart Starr’s ’57 Topps rookie card which is the most valuable in the set.

Current PSA Population:  Not scarce at all, as PSA has graded nearly 2000 copies of Starr's rookie card, thus the reason we chose a NM copy, of which PSA has graded only 130 out of the 2000 total that have been graded. 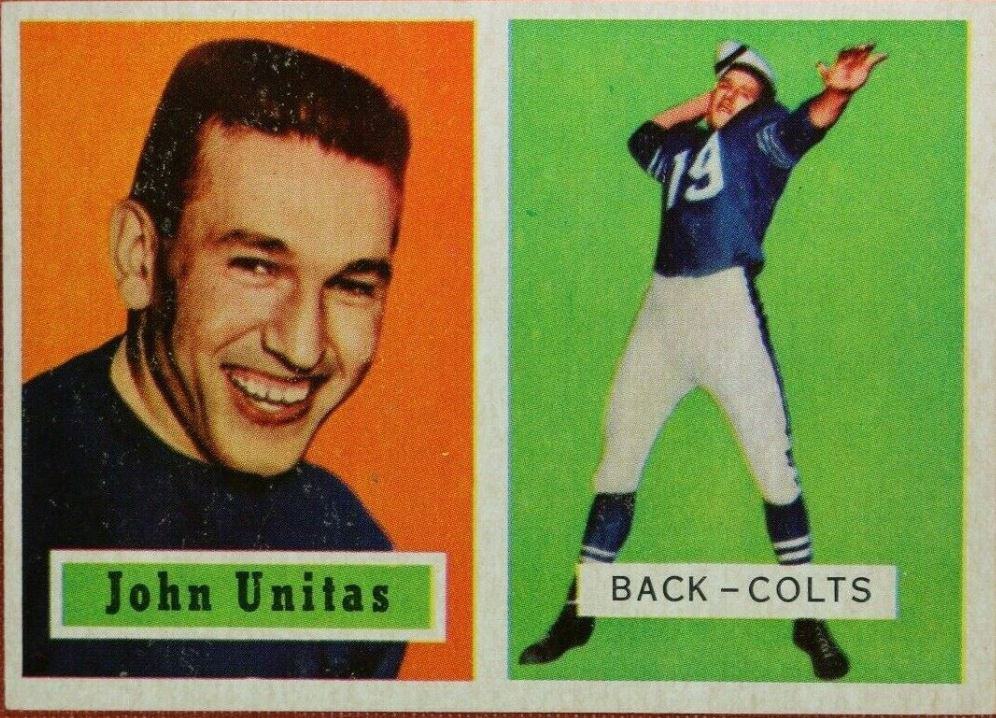 Why We Selected It For The Portfolio: NFL.com calls Unitas the #4 greatest QB of all time and for good reason; Unitas was a one of a kind quarterback, the first to throw for over 40,000 yards, leading the Colts to two NFL Championships and one Super Bowl victory.

Current PSA Population: Let’s be straight, this card is by no means scarce–PSA has graded over 2800 Unitas rookie cards, but given the high demand, this is still a highly collectible card.  We've chosen a NM copy, as PSA has graded less than 10% of the outstanding graded Unitas rookie population at PSA 8 or higher. 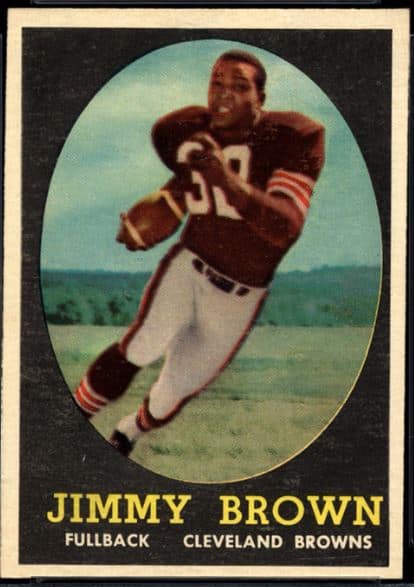 Why We Selected It For The Portfolio: While Jim Brown rookies have been on fire of late, I still say that over the long run, his rookie card should continue to be a good investment.  I consider Brown to be in the same stratosphere as Ruth, Williams, Cobb and Wagner, but in the football world.  We all know that vintage football tends to be unloved, but Brown is a guy that should have staying power for quite some time to come.

Current PSA Population:  In total, PSA has graded more than 4,000 copies of Brown's rookie card (including qualifiers).  Note that this number doesn't include any graded copies from Beckett or SGC.   PSA has only graded 5 PSA 9 copies of Brown's rookie, which is one of the reasons the card is worth over $300K.  Even NM-MT (PSA 8) copies are relatively scarce, with less than 200 copies graded by PSA. 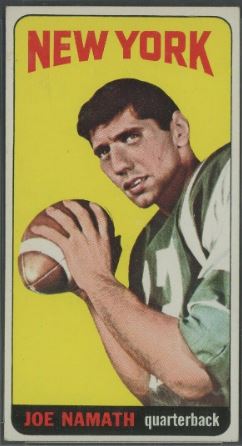 Why We Selected It For The Portfolio:  ‘Broadway’ Joe Namath is one of the most popular football players in the history of the game.  Namath was a great quarterback and a personable individual, which was a perfect mix for the bright lights of New York.  Namath’s 1965 Topps rookie card is one of the most familiar football cards to all collectors.

Current PSA Population: The ‘tallboy’ format makes this card tough to find in good condition.   Only 5 have been handed a PSA 9 rating, hence the reason for the quarter of a million dollar valuation.  Even lower grade copies to this day remain in very high demand; a good condition Namath rookie still sells for over $1000. 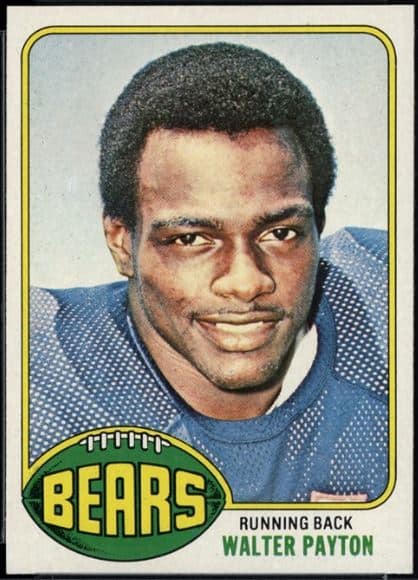 Why We Selected It For The Portfolio: Maybe the best running back to ever play the game of football, ‘Sweetness’ was one of the smoothest and most versatile backs the NFL has ever seen.  I consider Payton to be in the Tier 1 of investment potential for vintage football cards.  His name to this day carries a lot of weight with both old and young collectors.

Current PSA Population:  His 1976 Topps card is not rare by any means (PSA has graded over 7600 copies) but the significant demand for higher-grade versions make this one of the most sought-after cards in the hobby.  Of the 7600 graded, PSA has graded less than 10% in Mint condition.  You can often find a NM condition Payton rookie card for less than $600. 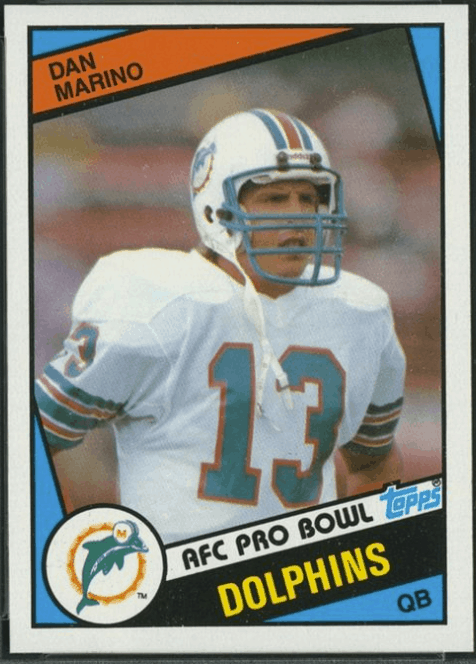 Why We Selected It For The Portfolio: While many put Marino to the side during all-time great quarterback conversations due to the fact that he didn't win a Super Bowl, the facts remain that Marino was one of the greatest quarterbacks in the history of the game (#7 according to NFL.com).  His 1984 Topps rookie card is one of the most iconic cards in the hobby.  (yes this one blurs the line of 'vintage' according to our official definitions--but we have made a few exceptions, including with our next Tom Brady pick).

Current PSA Population:  Some might balk at paying $4000 for a rookie card of a player when there is an existing total population for the card of over 23K copies, however, when you examine the PSA data, you can find that PSA has graded only 383 GEM Mint Marino rookie cards, making this a worthy investment in our eyes. 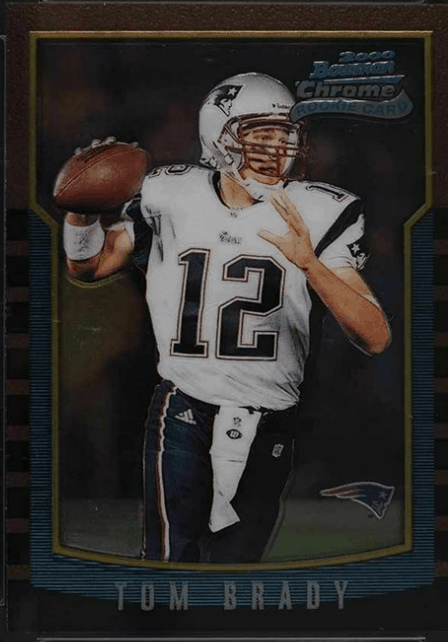 Why We Selected It For The Portfolio: Tom Brady is hands down the greatest quarterback in the history of the game, thus we had to make another exception in this list.  Sure, his 2000 Bowman Chrome rookie card is not technically what I would consider 'vintage', but it felt wrong leaving Brady out of this portfolio when building a list of the all-time greats.

Current PSA Population: PSA has graded 3400 copies of Brady's Bowman Chrome card, with 1680 or close to 50% receiving a PSA 9 or Mint Condition grade.  It's not rare, but I still like the investment potential here over the long run.

Check out our list of the best Tom Brady Rookie card investments.